BJP in the Anti-Dalit Dock: Dalits on the Streets in Gujarat,UP

NEW DELHI: The BJP has spent the last 48 hours trying to fight off an increasingly sticky anti-Dalit image that has been enhanced with the flogging of Dalits skinning a cow in Gujarat, the demolition of the Ambedkar heritage site in Mumbai and now the outrageous remarks by its Uttar Pradesh leader Dayashankar Singh comparing former UP Chief Minister and Bahujan Samaj Party (BSP) leader Mayawati to a prostitute.

Protests continue in Gujarat with 21 Dalits attempting suicide. The agitation spread across the state with safai karamcharis joining the stir, as schools and college remained closed, and shops downed their shutters during the bandh yesterday. Protesters stopped trains at different points in the state, with the state government unable to assuage the angry mobs.

In UP BSP supporters are out on the streets now holding protests against the attack on Mayawati. In Parliament Opposition Members flayed the government on the Dalit issue, stating that its anti-bias was now visible to all. “Dalits are being attacked with impunity. The government is using cow activism as a political tool,” Janata Dal(U) leader Sharad Pawar said in the Rajya Sabha. Opposition leaders united in attacking the government for “organised crime against Dalits” and the unleashing of social terror.

This consolidation of forces is extremely worrisome for the BJP, given the forthcoming Assembly elections, particularly in UP.

Singh, an Upper Caste Thakur and a prominent state leader of the BJP, called the BSP leader a “Vaishya” whilst speaking on camera in Mau. "Mayawati is selling tickets (to contest polls)...She is a three-time chief minister but she gives tickets to anyone who gives her Rs. 1 crore. If someone comes with 2 crores in the afternoon, she gives him a ticket. If somebody comes with 3 crores in the evening, she dumps the previous candidates and picks him. Today her character is worse than that of a prostitute,” Singh said (as quoted by the media).

Mayawati responded to Singh in Rajya Sabha, saying, “the nation will not forgive BJP for this. There are war of thoughts and ideas in the House, but never have I used derogatory words against anyone ever.”

The BSP leader added that Singh’s comments were reflective of the growing frustration within the BJP. She demanded his arrest and said that if his comment provoke violence, she cannot be held responsible. “There are war of thoughts and ideas in the House, but never have I used derogatory words against anyone ever. Dayashankar Singh should be arrested otherwise, if in response to this people get violent, it will not be on my conscience,” she said.

Amidst the uproar in parliament, senior BJP leader and Union minister Arun Jaitley intervened saying, “I should tell Mayawati ji that the party shares her grief over this issue, I will look into this matter, we stand with her. I am personally hurt that a BJP party person used such derogatory words against her.”

Meanwhile, Mayawati’s party members filed a police case against Singh. He has been absconding since and till the moment of writing had still not been arrested.

Rajya Sabha was adjourned and then met to discuss the issue with the Opposition members attacking the government for its anti-Dalit stance. Gujarat Congress leader Ahmed Patel said that the real face of the BJP Gujarat model had now been exposed, as the development was only for select industrialists and not for the poor masses.

The suicide of young Dalit scholar Rohit Vemula in Hyderabad Central University sparked off visible anger amongst the Dalits and other sections of society. However, at the time despite the protests the government took a hard line against the students and as CPI(M) leader Sitaram Yechury pointed out in Rajya Sabha pointed out today, that of 25 students who committed suicide in 2015, 23 were Dalits. He said that this was evidence of increasing persecution of the Dalits under the current government.

Yechury drew attention to discriminatory statements by Ministers in the central government was indicative of this anti-Dalit mindset, that he said was further highlighted by the RSS chiefs call to end reservations. He said that the ideological/theological mindset was visible in the campaigns that now prevented inter caste marriages, with the RSS preventing any inter caste mobility; in stopping upward mobility by the attack on students who were trying to get out of the limitations imposed on them as Dalits in the caste system. He said that this mindset had to end, and that could only be with action by protecting intellectuals and students moving up the social ladder instead of attacking them, and ending these discriminatory campaigns based on allegations and rumours.

What is required is the economic empowerment of Dalits on the ground and encouraging the restoration of the much needed scientific temper, Yechury said.

The BJP is finding it clearly difficult to restrain its members, many of whom have reflected an inherent anti-Dalit bias over the past months. This is not the first time that BJP party members have made anti-Dalit remarks, nor is it the first time that Mayawati has been targeted and what can only been described as personal slander. In November 2014, BJP spokesperson Shaina NC made headlines when she said that she was confused whether Mayawati was a ‘he’ or a ‘she.’ Women’s groups condemned the statement as misogynistic.

More recently, in April this year, BJP expelled Madhu Mishra, the party’s UP women wing president in the state for making anti-Dalit remarks. Addressing a public gathering in Aligarh, Mishra had said, "People who once used to polish your shoes are now ruling you, thanks to the Constitution. This has happened because there is no unity is us. We are a divided lot."

In Gujarat, like the Patel community earlier, the Dalit protestors pelted stones at the police force with the state government completely out of its depth in dealing with the situation. Chief Minister Anandiben who had nothing to say when the four youth were flogged to almost death by the Gau Raksha organisation members, is now trying to reach out to the protestors but without much success. 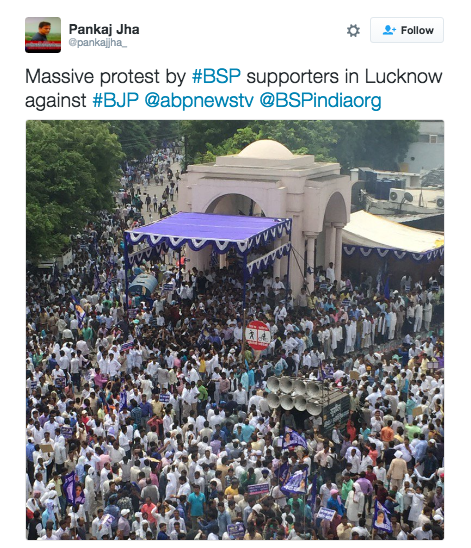 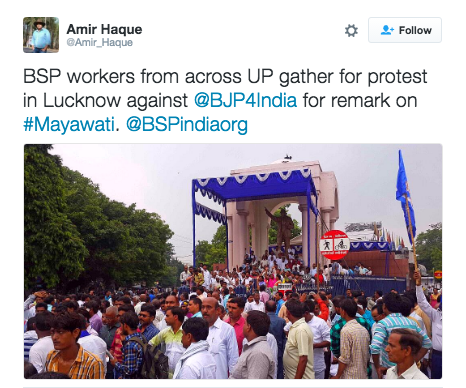 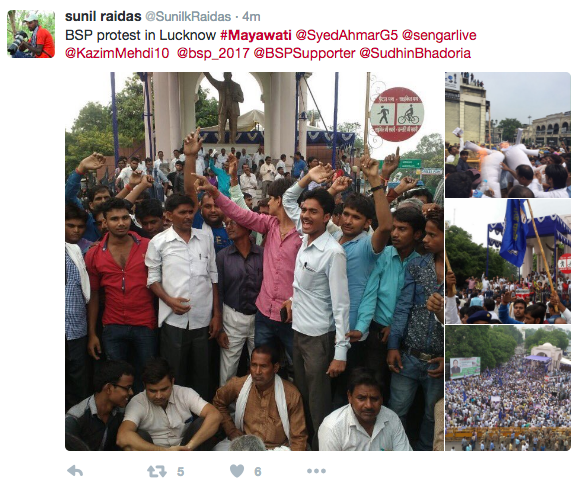