NEW DELHI: India in the 1960’s and into the 1970’s was depicted by the foreign media with what were popularly referred to as ‘begging bowl’ images with stories of poverty dominating. It took an aggressive foreign policy, supported by a domestic make-over of sorts, to push these photographs and stories off the front pages and then over the years, replace these with the brighter reports of India as an emerging economy and a tourist destination, moving on to ‘booming’ economy as New Delhi negotiated its vast markets to keep adverse reports off the international media’s radar.

Today, in just two years India is back with photographs of lynchings, floggings, unrest crowding the international media. Not just headlines but editorials, lead articles draw attention to the current strife and violence in India with, as a foreign correspondent said, “India makes a headline a day” but not of development but of primitive violence. Retired diplomats, at least some, are holding their heads, expressing deep worry about decades of hard work being virtually demolished with the beef lynchings, attacks on minorities, rape, beating of Dalits, students arrests all of which have been dominating western media headlines. Saffron clad right wing mobs are grabbing worldwide attention, with protests of Jats, Dalits, students for justice and rights getting similar space.

In the process Make in India, Start Up India have all faded. And the photographs are back to the begging bowl of the 1960’s, this time covered in violence as the Dalits and cow lynchings dominate. The New York Times in an editorial today under the headline Modi and India’s Dalits wrote:

“A protest in the Indian state of Gujarat’s largest city, Ahmedabad, on Sunday by thousands of Dalits — members of India’s lowest castes — has brought to a head the contradiction between Prime Minister Narendra Modi’s promise of economic opportunity for all and a politics of division driven by right-wing Hindu ideology.

The protest was called after four Dalits skinning a dead cow — a scorned task relegated to the long-oppressed group — were set upon by cow-protection vigilantes on July 11 near Una, Gujarat. The gang stripped the Dalits to the waist, chained them to a car, and beat them for hours while the police and others looked on.

The cow, sacred to Hindus, has become a lightning rod for the Hindu right under Mr. Modi’s Bharatiya Janata Party government. Mr. Modi himself has exploited the cow slaughter issue at rallies. The B.J.P.’s president, Amit Shah, has boasted, “Wherever there is a B.J.P. government, there is a ban on beef.” On Sunday, a B.J.P. member of Parliament, Raja Singh, declared, “I extend my full support to all those who take it upon themselves to teach those few Dalits a valuable lesson.””

The photograph carried with the editorial is: 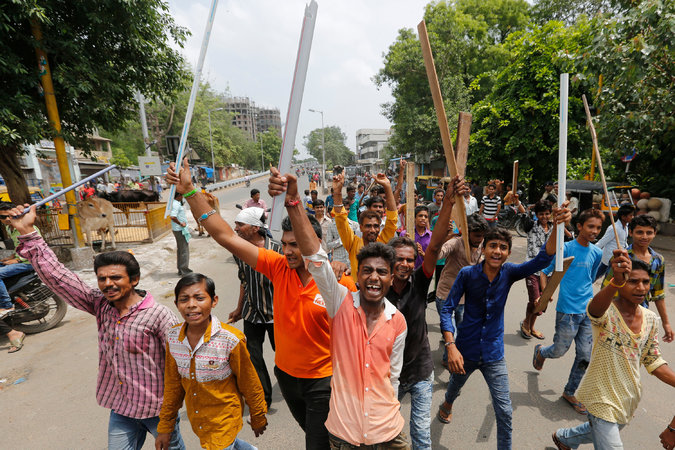 The editorial continues: “The result is lawless vigilantism. Last September, a Muslim man whose family was suspected of eating beef was killed by a mob. In March, two cattle traders were lynched in the state of Jharkhand.

Dalits have refused to handle dead animals, whose rotting carcasses are piling up, until they are given assurances that they will not be attacked and that their longstanding oppression will be addressed. Though aspirations and educational levels have risen among Dalits, they still face terrible prejudice. In January, a Dalit Ph.D. student committed suicide after caste-based hounding.

In 2014, Mr. Modi, who ran Gujarat for over 12 years, won India’s national election by a landslide on a promise to transform all of India on the Gujarat model of economic development. Protests last September by middle-class Patels, angered by a lack of jobs, indicated that even those who should be doing well in Gujarat are struggling.

On Monday, Mr. Modi’s handpicked successor, the Gujarat chief minister, Anandiben Patel, resigned, a sign of the B.J.P.’s concern that the turmoil in Gujarat will harm the party in state elections next year and national elections in 2019. That could very well happen if Mr. Modi does not break his shameful silence on cow vigilantes, and reset his political compass on a course of economic opportunity, dignity and justice.”

These reports come at a time when India is seeking American investment, particularly in the defence sector. All major newspapers in the US, UK and Europe have been reporting extensively on the continuing violence in India, particularly against the Dalits and the minorities.

Tourism is being impacted because of strict advisories being issued by most of the western governments warning their citizens not to visit India for fear or rape, and ‘scamsters’. Horrific incidents of sexual assault on Indians and visiting foreign women have been widely covered, and created a fear abroad that has impacted on not just the flow of tourists to India but on her image as a safe, and secure country.

Poverty is back in focus, more so as the violence has been against the very poor. The Muslims beaten and lynched by cow vigilantes, the Dalits flogged publicly, are all from tenements with the photographs flashed across the world damaging India’s efforts to project itself as a ‘shining’ developed nation that had grappled with and overcome its poverty. As a UK national visiting New Delhi said, “well you clearly are still in the dark ages, aren’t you? Killing people for what they eat, come on!”

In fact, in recent weeks and months international media reports on India’s economy have been overtaken almost in entirety by the continuing violence. Kashmir has been in the headlines with most of the major international newspapers carrying in-depth reports from Kashmiri writers about the ongoing protests and violence within. The deaths and in particular, the pellet injuries have been covered extensively in the foreign media.

The international coverage of India has shown a decisive shift since the attack on students with detailed coverage being given to the incident at that time. The Guardian reported from the UK about the Jawaharlal Nehru University protests with, “reaction of authorities to the protests at JNU – which is well-known for its politically active student body – comes against a background of what critics say is rising intolerance in India since Narendra Modi’s BJP came to power”. And noted that the government has “repeatedly been accused of seeking to repress free speech and of encouraging extremist nationalists who systematically intimidate critics.”

The Los Angeles Times wrote of the students protests at FTII, Hyderabad University and JNU stating,“In each case, the student demonstrators have been accused by BJP officials and authorities of anti-national behaviour. Kumar is the first student to face charges of sedition, under a colonial-era statute that was enacted to protect the country’s former British rulers but is now often used to discipline government critics.”

NYT in an earlier report under ‘The Enduring Curse of Caste’ wrote: “Mr. Vemula’s suicide — hardly a rarity among Dalits at India’s best universities — is emblematic of the problems of the country’s affirmative action program. Within a few years after independence, India had set aside for Dalits and other disadvantaged castes about 23 percent of government jobs and seats in public universities. Today, the reservations apply to many more groups and cover about 50 percent of such posts and seats. But numerical improvement does not an equal society make.

Dalit students still come from severe poverty. They lead de facto segregated lives on nominally diverse and inclusive campuses. They still face daunting disadvantages in the job market even after they graduate with degrees. The ability of “reserved” candidates is always suspect, regardless of their performance.

The gap between the high and the low castes, between so-called backward and forward communities, not only persists, it also manifests itself through ever-more subtle and complex forms of discrimination and violence. Being the beneficiary of reservations can itself be a stigma.”

The propaganda about growth and development, tourism and women emancipation that had dominated the foreign media and influenced the global perspective, has now moved into what can be loosely referred to as the ‘begging bowl syndrome’ where even a cursory look at the headlines on India today paint a picture of a country in strife with the economic promises of the government barely being noticed now.

The bad news from India has come on to the front pages, reversing the clock for Indian diplomacy that has “gone grey” as a former diplomat put it, in ensuring that negative coverage of India in the world media was replaced effectively by reports of an India climbing high. Now the NYT has moved back to commenting on what it terms as the Indian Prime Ministers “shameful silence” on cow vigilantes with Dalit rights moving out of the human rights talk shops on to the front and editorial pages of the big world media.

The following photograph carried by the NYT characterises the emerging trend of reporting on India: 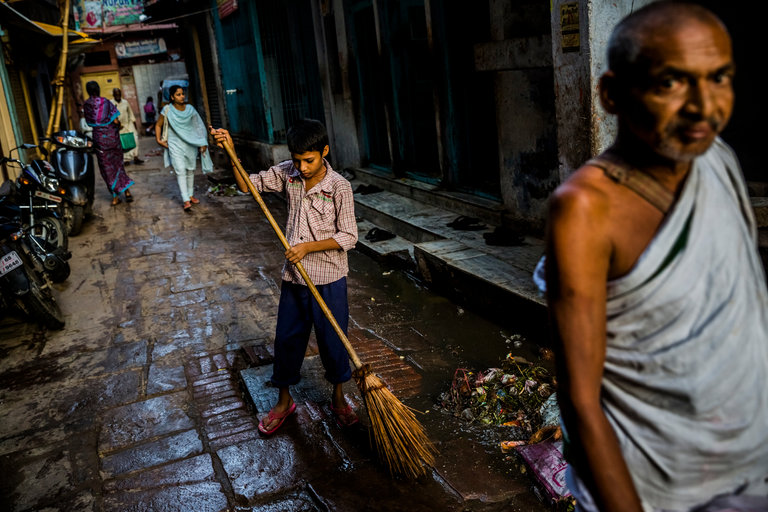