AHMEDABAD: They came in the thousands from all over Gujarat to Una, marching in small groups, singing songs, shouting slogans, making speeches at halts en route, a sea of people who came together in a strong assertion “No More”. They raised their hands and took a pledge, never to dispose off dead cattle again, never to clean sewers, with speakers urging all in Una, in the state, across the country, to join the struggle for equality, dignity, freedom and justice.

Muslims joined their Dalit brothers, as Una woke on Independence Day to a call for true freedom, from the yoke of oppression, and from the fear of discrimination. The state government watched, as the Dalits sensing empowerment in a genuine people’s struggle, were not daunted by protesters who blocked their way as they came closer to Una, and who threatened violence and pelted many of the demonstrators with stones. The Dalits took another, longer route, and as the organisers---all young and enthusiastic and not from any political party----told The Citizen, they would not give in so easily to pressure. 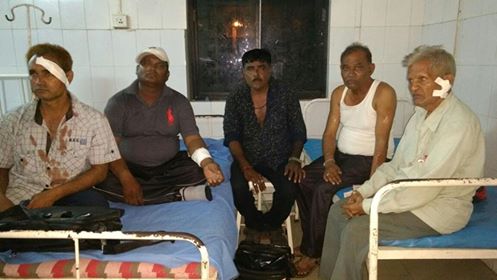 The marginalised communities did not let themselves down, and walked the extra miles to gather at Una on India’s Independence Day, talking not of war but of peace, not of threats and fear but of unity and struggle in what was seen by civil society members attending the meeting as a true celebration of azaadi. Azaadi slogans rent the air, azaadi from oppression, azaadi from poverty, from hunger, from discrimination as the new agenda for Independence was set by the most marginalised communities of the country coming together in a new found assertion of power.

Youth leader Jignesh Mewani who is now the convenor of this movement told The Citizen earlier that he had never expected to see a Dalit uprising in Gujarat. Being a worker from the ground Mewani had always highlighted the fear and the discrimination against the community, but given the levels of suppression and the absence of a Dalit political leadership in Gujarat had not expected the people to rise in this fashion.And to march through the barricades of power fearlessly, to take a pledge for dignity, and equality.

Mewani said that he had also never really expected the Muslims of Gujarat to support the Dalits as they were all doing, with hundreds marching to Una in solidarity. This, an excited activist said, is a revolution and the government despite its many efforts ---appeals, threats, denial of permissions----has not been able to curtail what is being projected as a march to freedom from the yoke of inequality.

When the mob of cow protection vigilantes (gau rakshaks) caught hold of four young Dalits, tied them, stripped them and then mercilessly flogged them in full public view,they had done so with the confidence of impunity. They took the video, and put it up on YouTube with the brazenness of those who know that they will not have to pay the price for the crime. The video ignited anger, and protest not just in the Dalits but in all concerned sections of society, with the uprising in Gujarat voluntary and spontaneous. It was after the first flush of protests, that the young civil society leaders came together to answer the need to give the protest a constructive direction. The padyatra ending in this mahasammelan on India’s Independence Day in Una is the first such mass action in a peaceful struggle that shows no signs of abating.