A new pattern has been set where official twitter handles of government departments have been used thrice, over calibrated intervals, to spew hate. A venomous tweet flashed from the official handle of government bodies. A quick retraction, always after it has been noticed and noted by the lakhs of followers, and a “sorry, oh we are so sorry” response from the government.

The latest has come from the official handle of Digital India, a flagship government initiative, that tweeted a poem in Hindi urging the Army to kill Kashmiris. Written to the lyrics of a Bollywood song, this poem sent out to over five lakh followers of Digital India asked the Army to keep firing on the Kashmiris until they came into the central square and sang the national anthem.

“The bullets have just started, don’t say later you didn’t get a warning, you will have to say Vande Mantaram every morning;” “Thrash them all you want, army; break their bones; If Mehbooba calls the police; Modi will handle it.” and so on ran the poem.

Electronics and Information Technology Minister Ravi Shankar Prasad told the media that he had “sought a report” and that the person who had tweeted the poem had been suspended. He claimed that the act was mischievious and insisted that “the contents of the tweet don’t represent the views of the IT ministry, Digital India or the government of India. I regret the tweet.” CEO of National e-Governance Division S.Radha Chauhan said that the official Twitter handle had been outsourced to an organisation called Trivone, and that the person responsible had wanted to tweet this from his personal handle, and had made a “mistake”.

Personal post? A Mistake? Difficult to believe when what should be secure Twitter handles, more so even than personal accounts, are breached not once, but thrice. With the government denials sounding casual about what appear to be a serious security breach where individuals have used government accounts to preach hate, and attack rival political leaders.

The tweet follows at least two similar incidents recently. A week ago, All India Radio’s official handle had tweeted against Congress vice president Rahul Gandhi asking, “How he became daring again to defame #RSS?” The tweet asked the Congress leader to “stick to comments” in a reference to his remarks where he had blamed “RSS men” for the murder of Gandhi. This statement has been taken to court since, with the Congress leader locked in a battle with the RSS.

The tweet was finally deleted by the Director General of News at AIR Sitanshu Kar who said that it did not conform to the “ediorial standards” of the national broadcaster. Kar told the media that it had been posted by one of the four persons who managed the Twitter account.

The first incident was in late July when Startup India’s Twitter account flashed what was a retweet: 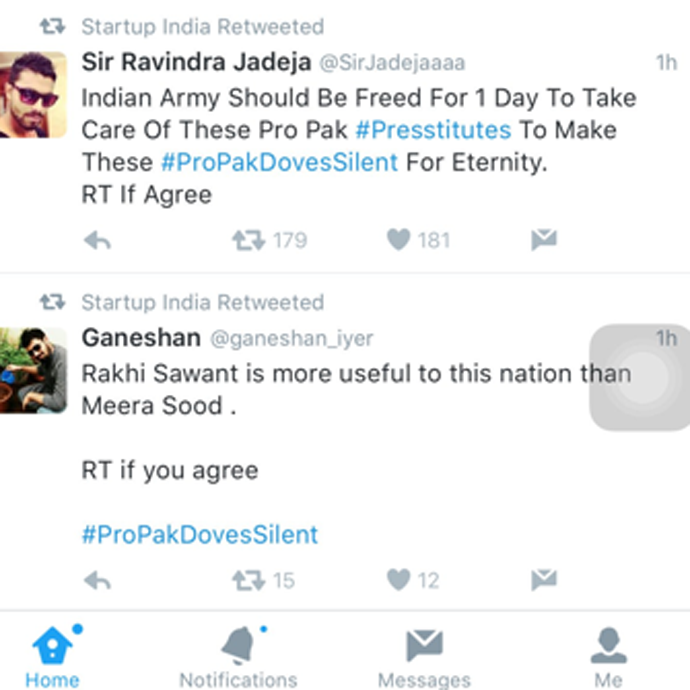 This tweet attacked Pakistan, and also journalists who are referred to by Hindutva trolls on the social media as presstitutes, without the description being challenged by any organisation or journalistic body in the country. After a while, to allow more retweets, Commerce and Industry Minister Nirmala Sitharaman distanced the government from it maintaining, as Minister Prasad has now, that the StartUp India Twitter handle had been given out to an external agency. “The unauthorised re-tweets were done by one employee of the agency duly hired by the Department of Industrial Policy and Promotion through a tendering process. The person assigned by the agency for this particular job is not decided by the department and is the sole prerogative of the agency,” she had said.