Uri Attack Rules Out Vacillation: War or Peace, No In Between

NEW DELHI: The pressure on Prime Minister Narendra Modi and his Cabinet to “act” ---that is now an euphemism for a counter attack on Pakistan---is increasing by the minute since militants took out 17 soldiers and injured at least 30 others in an attack on the Army camp in Uri. Amidst the cacophony of television, added to by whiskered generals and anchors in suit and tie, the sober voices advocating caution are lost, at least for the moment.

The BJP led government is now being hoist on its own petard, to use a rather outdated but eloquent phrase, with its own leaders now openly demanding that Pakistan be taught a lesson. RSS leader Ram Madhav, now with the BJP has asked for a “jaw” in place of a tooth, even as the PM has held a review meeting with National Security Advisor, his man for all operations, Ajit Doval in the lead.

PM Modi is in a quandary as this, after Pathankot, is being seen by the security establishment that has been supporting him, as the opportunity to hit back at Pakistan. And as the former generals and retired bureaucrats have been maintaining on television, on the social media, and on email threads, “this is the time to hit them hard.” War was virtually declared last night on television channels, with the government clearly feeling the pressure from the retired but very vocal constituency that believes that military action---covert, but preferably overt---is the only befitting response.

“We cannot have Pakistan killing our soldiers in this fashion, this will not end, it will continue until we teach them a lesson,” is the emerging consensus of television, and sections of the retired bureaucrats and intelligence, military officials. 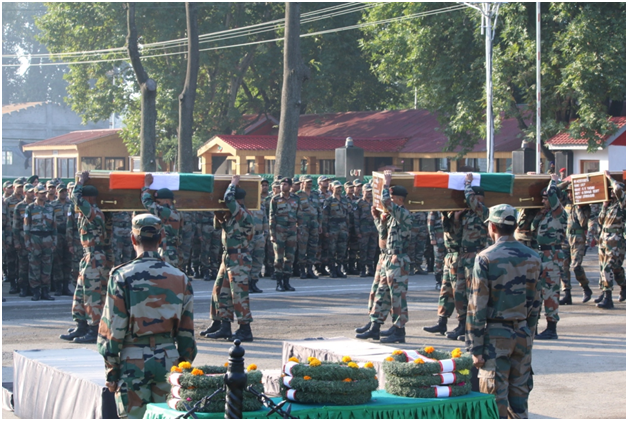 But it is also clear that counter action will be followed by retaliation from across the border, in what could snowball from an intended “limited” hostility to a full fledged war with both sides polishing the nuclear button in the process.

Can India afford a war? No. Nor can Pakistan. No mature country interested in the development of her people can. But when the rhetoric becomes as ugly as it is at the moment, senses take leave of political leaders on the one side, and the military on the other, as the people of South Asia know from past experience. However, given the international pressure the government is unlikely to feed and satisfy its constituency, and instead move back from the precipice with whatever dignity it can muster.

The Uri attack took place just three days after Pakistan Prime Minister Nawaz Sharif met with Army Chief of Staff General Raheel Sharif. And within a day of PM Sharif leaving for New York to attend the United Nations General Assembly where Pakistan is expected to ratchet up the decibles on Kashmir. The intelligence assessment here is as follows:

-one, the Uri attack followed a Pakistan assessment that the Army, having lost 17 soldiers, will retaliate on the civilian Kashmiris, with the oppression further feeding into the Pakistan narrative for the UN;

-two,that General Sharif who is retiring shortly, is not an Army chief who will tolerate meddling in Balochistan and has decided---as he indeed announced---to up the ante on Kashmir. He said a week ago that Kashmir was “Pakistan’s life line” and “we shall continue our diplomatic and moral support to the freedom movement at all levels.” This is an oft repeated statement by Pakistan leaders and generals but in the current context it acquires new meaning;

-three, Pakistan has changed track to move away from attempts at dialogue with India. After two years Islamabad seems to have taken a decision not to urge New Delhi to talk, but instead has moved deliberately towards the international community on Kashmir;

-And four, PM Sharif will rev up the diplomatic effort on Kashmir across the board to exert pressure on India to talk.

PM Narendra Modi, according to sources speaking to the media, has given a nod to diplomatically isolate Pakistan. That this is not going to be easy is evident in the initial reactions from both the United States and the United Kingdom that have officially condemned the terrorist attack on the army camp in Uri, but not said a word about Pakistan. Both have pledged their support for India in combating terrorism, but have not even remotely pointed a finger at the neigbouring country in their official response.

If the decision taken at all the various top level meetings held after the Uri attack is not to go to war, or for that matter even if it is, New Delhi will have to move to de-link Kashmir from whatever hostilities it has reserved for Pakistan. This has been pointed out over and over in these columns but the BJP and the RSS are reluctant to jettison the heady formula of Pakistan+Kashmir+Muslim+Terror = Polarisation+Votes.

The result has been curfew for over two months in Kashmir, daily protests, over 80 persons, mostly young people, killed, thousands injured by pellet guns, raids, arrests, media censorship, shut downs all feeding into a narrative of insecurity, anger and alienation. The government has not even moved to scale down the violence by opening the doors for an unconditional dialogue. A little effort made by the Opposition was clamped down upon, with the visit of an all parliamentary delegation to the Valley being followed almost immediately by even more stringent restrictions on the Kashmiri leaders some of the Members of Parliament had visited in Srinagar.

Kashmir continues to boil and the violence this time, given the intractable position taken by New Delhi despite repeated pleas even by its ineffectual Peoples Democratic party ally in government, shows no signs of easing. The protests, firing, arrests have become a pattern with the Kashmiri youth showing no signs of the fatigue that New Delhi had clearly been hoping for. Intelligence agencies are torn between the dialogue position, and the ‘show no mercy’ line taken by the NSA and the government. Sources are of the view that by forcing the issue, New Delhi has shown faulty assessment of the situation on the ground, arising from a failure to understand the nature of the current protests and the participants driving it.

A war with Pakistan, as sources pointed out, will not resolve Kashmir or bring the situation near containment. Military sources are worried about the escalation that has taken the situation in the Valley back to the 1990s. And worse as unlike the 1990s young children are at the forefront of the protests, taking the brunt of the bullets. Pellet ridden bodies of young teenagers, funeral processions have become a pattern further compounded by the ‘no restraint’ orders given by the government to the forces. The terror attack at Uri had little impact in the Valley, with protests escalating if that was possible, and the security forces hardpressed to maintain peace despite strict curfew in most parts of Kashmir. In fact the sense of fatigue is being felt by the paramilitary forces deployed in the state, with most keeping duty hours far in excess of permissible limits.

The government, thus, has two options. To wage war, and open India to uncontrollable consequences. Or to work and restore peace, starting with Kashmir. Under former Prime Minister Atal Bihar Vajpayee and the initial years of his successor PM Manmohan Singh, the clock had started to move forwards for the first time in decades. Talks through working groups had been established with Kashmir, with the hope of an outcome diluting the tensions considerably. The process of the dialogue itself, as one of the members of the working group said, had a salutary effect and opened new doors of interaction. Confidence Building Measures along the Line of Control were in place, with trade and movement of divided families creating new avenues of opportunity. Talks with Pakistan albeit in fits and starts were also on the plate, with considerable progress being reported by both sides on other issues such as Siachen, Sir Creek and people to people relations.

Will a war curtail Pakistans reliance on terrorism? A hard lesson has only escalated its dependency on the extremist outfits it nurtures. After Kargil, Islamabad had made it clear to Washington that it could not wind up the terror groups as it was not sure about India’s commitment to peace. And the US, as had been reported extensively in the media, had turned a blind eye to Islamabad’s militant cadres. Peace, on the other hand, can isolate Pakistan’s reliance on terror as a weapon more effectively than war as it will rob it of any strategic justification for keeping the outfits alive. In India-Pakistan’s brief flirtation with peace, Islamabad had felt the heat from the international community to wind up the terror spots with its military being put on the defensive.