Instead of Justice, Najeeb's Mother is Dragged and Detained by Cops

NEW DELHI: Justice denied. And now not just that but police action against the distraught mother of missing Jawaharlal Nehru University student Najeeb Ahmed,who was dragged by the police and detained in Mayapuri police station after a crackdown on protesting students.

Najeeb Ahmed has been missing from his hostel room in JNU since October 16. The students who have been demanding a proper enquiry and action by the police to trace the missing student, had announced a protest at India Gate today. They were stopped by the police before they could reach the spot, and in the action Najeeb’s mother was dragged (see photograph) and detained by the cops.

Fatima bibi, has been camping in Delhi ever since she received a phone call from her son telling her to come immediately as “something very bad” has happened. She reached the hostel to find that her boy was missing. 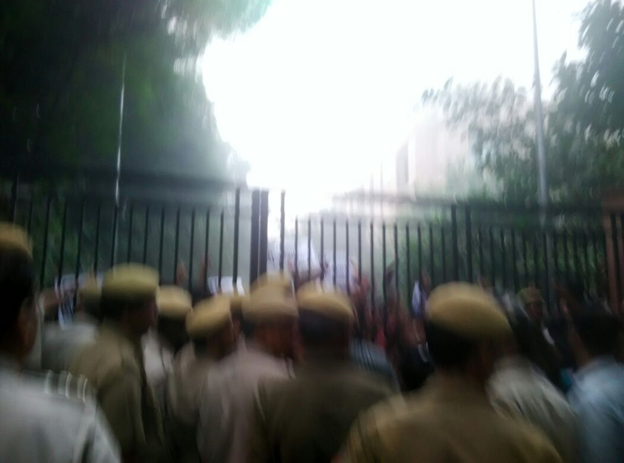 Since then she has been living between hope and deep despair, with all control now shattered as she cried loudly at a meeting in JNU addressed by opposition leaders. The decision to protest at India Gate was taken by Delhi Chief Minister Arvind Kejriwal who said that it was imperative to make the central government listen, and to ensure that the police traced the young student.

Fatima bibi is not a protestor. Nor is she keen to protest. But as she said to The Citizen earlier, she just does not know what else to do. In between she was exhausted, and decided to stay indoors at the place where she is staying, to recoup. But then this mother who is riding a roller coaster of emotion, decided that she would be with the students who have been demonstrating almost every day for action.

JNU Vice Chancellor has remained indifferent despite the fact that the young student has still not been traced. The students and family members point out that the police, apart from pasting a few posters, have not even completed a minimal enquiry. There has been no attempt to find eyewitnesses who might have seen Najeeb, with or without others, after he left his room at 11 a.m. on that fateful day. This was just a few hours after ABVP boys had entered his room, reportedly had an altercation, and then summoned additional students and alleged outsiders to beat Najeeb mercilessly. The warden and other students rushed to the spot but the beating continued in full view. Najeeb was then taken to the hospital on the night of October 15, from where he called his mother. She telephoned him from the bus station when she reached Delhi at 11 a.m. He was back in his hostel room by then, but when she reached JNU by 1pm he had gone missing. 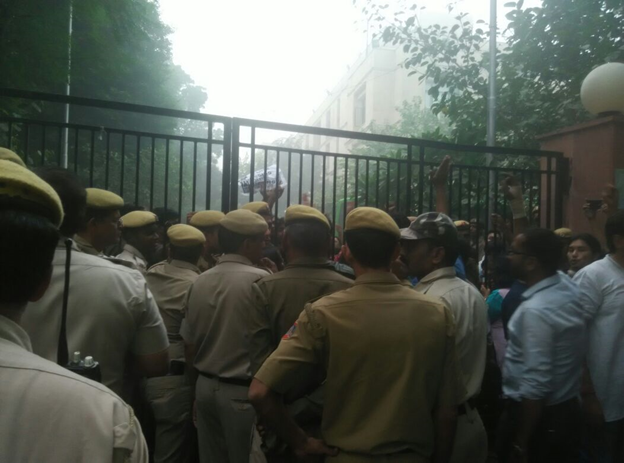 There has been no police enquiry or even a suggestion of what the cops think might have happened to the boy. Instead a case has also been registered against him for an alleged assault on three ABVP boys who had gone to his room in the first instance.

Now his mother has been detained, being dragged and manhandled by the police. Fatima bibi is undergoing visible trauma, and her wails pierced hearts at the JNU meeting with many students and faculty members wiping their tears. She is visibly suffering but clearly under the police, under directions from the Union Home Ministry, have been instructed to show no care in dealing with her and the students insofar as their demand to find Najeeb is concerned.