NEW DELHI: Democracy in India has taken on a different colour over the last few months. This was all the more apparent in the capital city of New Delhi in the last week, as a series of events highlight the government’s attitude toward citizens, the opposition, and even the media.

On Sunday, missing Jawaharlal Nehru University student Najeeb Ahmed’s mother was dragged and detained by the police. Her crime? Demanding police action in locating her son, who went missing after a brawl with ABVP members at his hostel on October 16.

The students who have been demanding a proper enquiry and action by the police to trace the missing student, had announced a protest at India Gate today. They were stopped by the police before they could reach the spot, and in the action Najeeb’s mother, Fatima Bibi, was dragged and detained by the police. There has been no police enquiry or even a suggestion of what the cops think might have happened to the boy. Instead a case has also been registered against him for an alleged assault on three ABVP boys who had gone to his room in the first instance.

Democracy, in this instance, played out with the police manhandling, dragging and detaining a visibly distraught mother, whose only demand is more concrete action by the force to locate her missing son.

Another incident where democracy showed its new colours in New Delhi recently was over the death of ex serviceman Ram Kishan Grewal, who said in a suicide note and to his family that his suicide was in connection with the government’s failure to deliver on One Rank One Pension (OROP). As has been long standing practice, political leaders moved to visit the ex serviceman’s family in hospital -- something that politicians in India have been doing since independence itself, right or wrong. 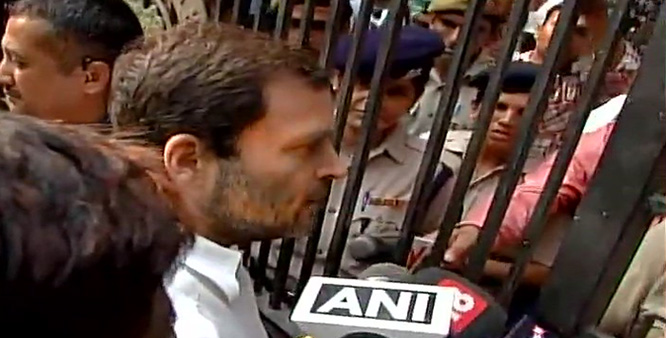 This time, however, the police -- under aegis of the central government -- was let loose on not just the political leaders but also the family of the dead soldier. Minister and former Army chief VK Singh gave a quote to the media suggesting that the soldier might have been of unsound mind. The family members protested, with the soldier’s son joining some AAP demonstrators to express his anger. He was manhandled, kicked and detained in a police station in Delhi.

The Delhi Chief Minister sought to visit the police station to intervene, and his car was surrounded by the police who refused to allow him to move. Rahul Gandhi was detained twice, and was kept in the Tilak Marg police station. BJP spokespersons have appeared on television since, defending the indefensible.

Democracy, in this instance, played out with the police moving to undermine a duly elected government by preventing Delhi Chief Minister Arvind Kejriwal from visiting the bereaved family. It also played out in detaining a political leader, and perhaps most significantly, manhandling a grieving family member. Politics in this case, was not being played by the Opposition parties, but by the central government that came to power promising full implementation of OROP, but falling short of its commitment.

A third incident in the last week that has highlighted the changing nature of democracy in India is the one day ban that was imposed on NDTV India as “punishment” for the channel’s coverage of the Pathankot attack.

After a wave of protest, including a response by the channel to take the government to court over the incident, the ban has been temporarily called off.

However, the ban in the first place -- scheduled for November 9 -- has been indicative of the pressure that journalists and media houses are being subjected to. The abuse and the threats against individual journalists on the social media has been on the rise, with most of the twitters claiming allegiance to the Prime Minister and the BJP.

The move against NDTV India is the first open attack on the freedom of the media by the government. It has come on the issue of ‘nationalism’ as expected -- with Pathankot terror attacks forming the backdrop to the direct move to muzzle freedom, and actually suspend the broadcast of a channel. As senior editors pointed out, this was not just reminiscent of the Emergency but much worse as in targeting one particular channel, the government had given to itself the right to discriminate between media organisations, using a hard stick on those it felt were going out of line.

NDTV India, the Hindi channel of the group, has been taking a fairly independent positions on most issues and often raising questions. Despite the limitations imposed by muscle flexing tactics that are well known in the industry, the channel was able to find the answers in a more subtle approach that allowed space for fairly independent journalism. Anchor Ravish Kumar is seen as particularly forthright, and has become the target for those seeing ‘nationalism’ in a controlled, censored and often craven press.

The government, on its part, defended the ban, with MoS, Home Ministry, Kiren Rijiju saying in response that “We should stop this habit of raising doubts, questioning the authorities and the police. This is not a good culture.”

This statement formed the basis of a satirical prime time show hosted by Kumar, where two mimes were the panelists and Kumar highlighted the point, “if we can’t ask questions, what are we to do?”

These three specific incidents fit into a larger pattern that is coming to define democracy in India today -- where citizens, whether in Kashmir or New Delhi, are denied their recourse to justice; where opposition leaders are routinely undermined and democratically elected governments, be it AAP in Delhi or the Congress in Arunachal Pradesh or Uttarakhand, are not allowed to function; and where the media, be it NDTV or journalists in Bastar or Kashmir, is routinely muzzled.