NEW DELHI: A key point of criticism advanced against Prime Minister Narendra Modi’s surprise move to demonetise 500 and 1000 rupee notes has come to bear fruit in the few hours since its announcement.

Experts have raised concerns that in an economy that is cash-less by design, the poor -- who do not have the necessary fiscal literacy -- will be the worst hit.

Economist Prabhat Patnaik, in an article for The Citizen that has since gone viral, says “the very idea of a cashless India represents a pipedream of a segment of the elite, which is totally unaware of the difficulty that a common person faces in obtaining a credit card, or even opening a bank account (despite Modi’s loud boasts about expanding people’s bankability). The move towards a cashless economy, while not being realized, will simply become an additional means through which the common people will get squeezed.”

On Thursday morning, as banks reopened across the country permitting people to exchange higher value notes to lower denominations to the cap of Rs. 4000 per day, news emerged from Gorakhpur that a 40 year old washerwoman died -- apparently of shock -- when she found out at the bank that her 500 and 1000 rupee notes no longer will be accepted. The woman found out about the centre’s demonetisation policy only on reaching the bank at Captainganj tehsil of Kushinagar district, Gorakhpur. The news was reported by the Hindustan Times.

Images of the woman lying on the floor, her passbook and a few scattered 1000 rupee notes visible, went viral on social media. 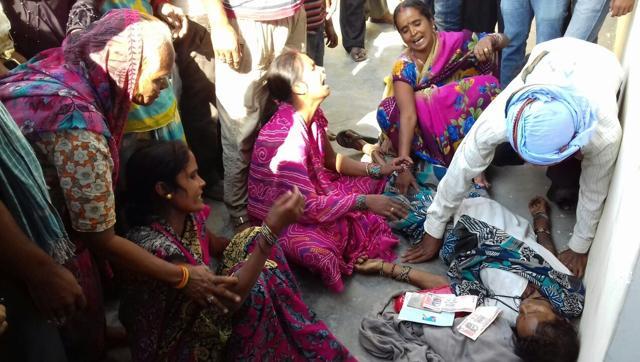 The HT reports states that the woman had managed, through hard labour, to save Rs. 2000. Having earned in small denominations, she exchanged the money some time ago to two 1000 rupee notes so that it would be easier to store and carry.

On hearing of the news of demonetisation, the woman allegedly went into a state of shock and died.

Although provisions exist for people to exchange 500 and 1000 rupee notes at banks and post offices -- to the tune of Rs 4000 per day against a valid ID proof -- the fact of the matter is that a vast majority of India is financially illiterate. Over 200 million people still do not have bank accounts, and over 40 percent of bank accounts that exist are dormant and have never had money deposited or transacted. Further, for many villagers in India, banks are kilometers away and not easy to access.

Concerns, therefore, have been raised by economists, policy commentators and others, on how this move to demonetise 500 and 1000 rupee notes -- which are not just the currency notes of the rich but also the notes that make up the meagre life savings of a majority of India -- will play out as it will invariably cause stress, confusion and hardship to the common Indian. As Patnaik writes, “This is not the first time that such demonetization of currency notes has occurred in India. In January 1946, the 1000 and 10000 rupee notes were demonetized; and in 1978 the Morarji Desai government had demonetized 1000, 5000 and 10000 rupee notes from the midnight of January 16. But even in 1978, let alone in 1946, this had caused no hardships for the ordinary people, since most of them had scarcely ever seen such a note, let alone possess one. (Even in 1978 Rs.1000 was a lot of money and common people hardly saw notes of 1000-rupee denomination). But that move of the Morarji Desai government, even though it did not impinge on common people, did not end the scourge of “black money” either. The Modi government’s move, while equally ineffective in countering “black money”, has the added flaw of impinging severely on common people.”

In addition to causing confusion amongst the fiscally illiterate, the fact that these notes were demonetised within a span of four hours (the PM began his address at 8 PM, and the notes ceased to be legal tender at midnight), has led to a huge array of problems. Reports of brawls breaking out across the country have begun pouring in, as shopkeepers, petrol pump owners and others have refused to accept the notes -- and till this morning, there was no provision to change 500 and 1000 rupee notes.

In the most shocking of such incidents, an eight year old girl died reportedly because of a delay in treatment, as her father could not get petrol to take her to the hospital on time after pumps refused to accept his 1000 rupee note. The incident took place at Mahua Mafi village, notes HT.

Although the government instructed petrol pumps, hospitals and railway and bus station counters to continue accepting 500 and 1000 rupee notes for 72 hours, reports suggest that across the country, this was not upheld as the higher value currency notes were refused. This is partly because of the fact that 500 and 1000 rupee notes make up more that 85 percent of the money in circulation, and hence, change for lower denominations in equivalent amounts just does not exist.

While the two above reports from Gorakhpur and Mahua Mafi are the extreme result of the demonetisation announcement, almost every single Indian, especially the lower and lower middle class who do not have credit cards and other means to fall back on, has been severely hit. Stories has plenty in the media of how people, with only a couple of 500 or 1000 rupee notes on them, are unable to get basic necessities such as food as no one accepts their notes.

Meanwhile, a PIL has been filed against the government’s decision to demonetise the notes in the Supreme Court. Advocate Sangam Lal Pandey filed a writ petition seeking a judicial order quashing the government's decision to "immediately discontinue" the circulation of Rs. 500 and Rs. 1,000 currency, adding that the poor must be given a reasonable amount of time to organise their lives so as to mitigate the suffering caused by the decision.

Long queues were reported in all cities, with banks all following different procedures. Some refused to change the money even under Rs 4000 saying that they could take a deposit if the customer so wanted. Many banks in Delhi ran out of Rs 100 and lower denomination notes by lunch time. Frustrated and angry, residents queued up for hours to change their money, the most hard hit being low wagers who needed to exchange the Rs 500 and Rs 1000 bills to survive.

Interestingly, indications that a new system cushioning those with large stocks of money was emerging came from two incidents narrated to this reporter. One from a person who said he had spent cash savings on purchasing foreign alcohol as the vendor was more than prepared to accept the high currency notes. And another from a person who had to make payments for a second hand car with cash, and found the dealer more than willing to accept the high currency notes. Clearly those accepting the demonetised currency had found a way to exchange this into legal money although it could not be ascertained as how this is being done at the moment.