Demonetisation: Was It Kept A Secret? How Did the Media Declare This Before the PM Did?

NEW DELHI: Two serious questions to do with ‘professional integrity’ on which the success of demonetisation rests, have find their way into the public domain with politicians and scholars raising these after Prime Minister Narendra Modi declared Rs 500 and Rs 1000 currency as illegal tendor.

One, a question Delhi Chief Minister Arvind Kejriwal has raised with some tenacity, was the information about the demonetisation made available to select ‘friends’ before PM Modi made the dramatic announcement?

Two, as former Finance Minister P.Chidambaram said at a press briefing in Delhi, why has the government introduced the Rs 2000 note if the intention behind the demonetisation was to bust the black money market? “This is a puzzle” said the former Congress Minister. Kejriwal always more direct, said that his party would have supported the demonetisation had the government not come up with the Rs 2000 currency, that constituted a clear shot in the arm for black market operators.

On October 27,2016 (see cover photograph) the Kanpur edition of the Hindi Jagrann newspaper published a report under the headline “ab ayega Rs 2000 ka note” (now there will be a Rs 2000 note). Written by journalist Brijesh Dubey, the news item described the features of the new note---that are only now being reported by the Economic Times and others newspapers after it was officially released---and stated clearly that the Rs 500 and Rs 1000 notes were likely to be withdrawn.

Dubey, when contacted by The Citizen, said that the news had been reported in Gujarat newspapers much earlier and was not as major an exclusive as this writer was making out. He said that photographs of the Rs 2000 denomination note, the introduction of which first came to be known to most Indians only after PM Modi’s announcement, had started circulating for several weeks now on Whatsapp application on mobile telephones. Clearly there was sufficient prior information about the proposed demonetisation to find a ripple in the media.

Opposition leaders in Delhi are convinced that the move to demonistise at this stage is directed at hurting the political parties contesting the forthcoming Assembly elections. It is no secret that elections are funded by black money, a practice that successive governments have made no move to curtail. And if indeed information of the proposed demonetisation was ‘leaked’ as leaders are alleging, this does places the non-BJP political parties at a clear disadvantage.

Economists such as former Finance Secretary S.P.Shukla point out that ‘professional integrity’ is key to the announcement of such schemes. “We can only hope that this was maintained,” he said.

Significantly, Andhra Pradesh chief minister Chandrababu Naidu is currently taking all the credit for the demonetisation in his state. He had shot off a letter to the PM detailing precisely what has been since followed, maintaining, “Only 39 percent of the Rs 1000 notes and 45 percent of the Rs 500 notes are in circulation and the rest of them are hoarded as black money.” For him the target is his closest rival YSR Congress and YS Jaganmohan Reddy who is in the hot seat for disproportionate assets. And in a murky exchange the opposition alleged that Naidu had transferred huge sums of money into the account of his infant grandson just before the demonetisation was announced.

In Uttar Pradesh there are similar allegations against the BJP, with the BSP and the Samajwadi party extremely critical of the move alleging that select friends had been informed beforehand. Kejriwal who is contesting the Punjab elections said categorically, “There is evidence that their (BJP) friends and own people were informed a week before the decision was announced. They have made all arrangements like buying property or gold. BJP is going to fight polls in Uttar Pradesh and other states. It has made arrangements.”

“Common men are the only ones suffering. I spoke to many people, they told me that black money holders have done settings already. Money will be delivered to their homes in lieu of 15 to 20 per cent commission,” the Chief Minister said.

A revealing Twitter war of words has broken out between Kejriwal and the Paytm CEO Vijay Shekhar Sharma who was in the morning newspapers today for taking a flight out of the country to avoid the smog. Interestingly this was just after Prime Minister Modi appeared on a Paytm Advertisement, that basically is urging people to switch to the payment mode offered by this company. 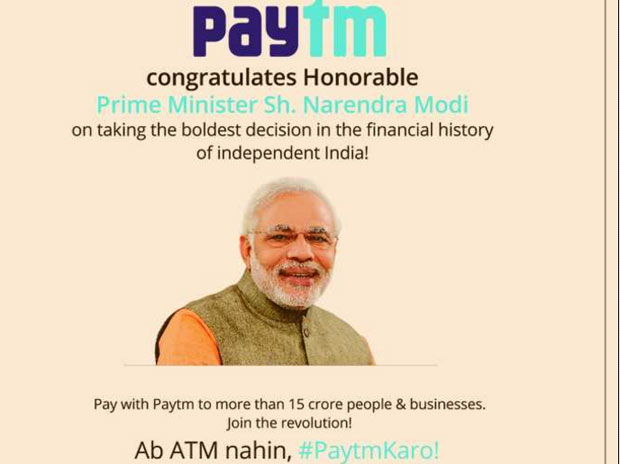 “Utterly shameful. Do people want their PM to model for pvt cos? Tomo, if these cos do wrongdoings, who will act against them? Paytm biggest beneficiary of PM’s announcement. Next day PM appears in its ads. Whats the deal, Mr PM?” Kejriwal asked.

Sharma tweeted back, “Dear Sir, the biggest beneficiary is our country. We are just a tech startup, trying to solve financial inclusion and make India proud.”

The Hindustan Times in an interview with Sharma had reported him as saying, “the removal of Rs 500 and Rs 1,000 notes will help the company, as a lot of people will use Paytm.” This is one company that seems to have profited from the demonetisation immediately, with the HT reporting, “According to data from the company, in the days after the demonetisation, Paytm’s traffic grew seven times, app downloads increased three times, people added 30% more money to their wallets on Thursday (the first day increase was 10 times over normal days), online transactions grew three times, and offline (payment to retailers) grew five times. Paytm’s transaction value continued to grow 200% every day for the past couple of days.”

PM Modi has allowed his photograph to be used by the company now with Kejriwal continuing to maintain as in a recent tweet, ““Utterly shameful. Do people want their PM to model for pvt cos? Tomo, if these companies do wrongdoings, who will act against them.”