PURANDAR, Maharashtra: Pratibha Vilas Kamthe is a farm laborer from a family of marginal farmers. She has recently moved from a cash salary to wages being deposited in a bank account. Agriculture inputs seller Santosh Jagtap encourages customers to use their debit and credit cards, his shop in Saswad has a board announcing, “ATM will be accepted,” shorthand for accepting cards. Sanjay Kumbharkar, a tea stall vendor on the highway, offers credit to his regulars, including daily wage labor from Bengal.

There are many stories emerging now from the villages of Purandar taluka in Pune district of Maharashtra. There is pain and anger but it is more directed towards the government’s attitude towards the District Central Cooperative (DCC) bank and its affiliates. With the announcement that DCC banks will be allowed to offer credit to farmers, even that anger should subside.

A fortnight has elapsed since the demonetization, so the first shock is gone. Most local people have accounts in public sector banks under the Jan Dhan Yojana to avail subsidies. Besides, there’s always credit. So much of the people’s lives run on credit — from buying agricultural inputs to selling their produce, it’s often on credit, although labor is paid in cash every Monday.

Those who felt the pinch were those with accounts only in cooperative banks, regarded as bastions of political patronage. The Reserve Bank of India has not allowed cooperative banks to change the old Rs 500 and Rs 1000 currency notes that have been demonetized on November 8. They are allowed only to accept deposits of such notes. That is an ongoing process with milk and soon cooperative sugar factories depositing farmers’ dues in these accounts.

It is the small growers and retail vegetable sellers who are bearing the brunt, stuck as they are with inventories of perishable commodities. Kusum Vithal Adekar, a vegetable seller in the central mandi in Saswad, said, “I used to buy stock worth Rs 4,000-5,000, which was sold in two days. It is now taking me eight days to sell the same quantity. I cannot buy fresh vegetables because I have no cash. People are not buying vegetables because they don’t have the new notes. Vegetable prices have crashed and farmers are selling at whatever price they can get.”

This brings home the pain of the grower and the retailer from the unorganized sector. There is no infrastructure to store their goods. Purandar taluka is primarily a horticulture belt, growing custard apples, pomegranate, chikoo and guava. Currently, custard apples are to be seen in heaps at the wholesale fruit market in Saswad, where Girish Kale is conducting slow but steady business.

Kale, standing beside a pile of custard apples, doling out cash in the old notes, is unfazed that he is dealing in currency that is now illegal. He admitted that business is down significantly at the wholesale fruit market. “Farmers are accepting and paying in the old currency,” he said, waving a thick wad of Rs 500 and Rs 1000 notes. An elderly farmer, just paid in two Rs 500 notes, said he would go and deposit them in the bank, unworried that business is being conducted in notes that are no longer legal tender. 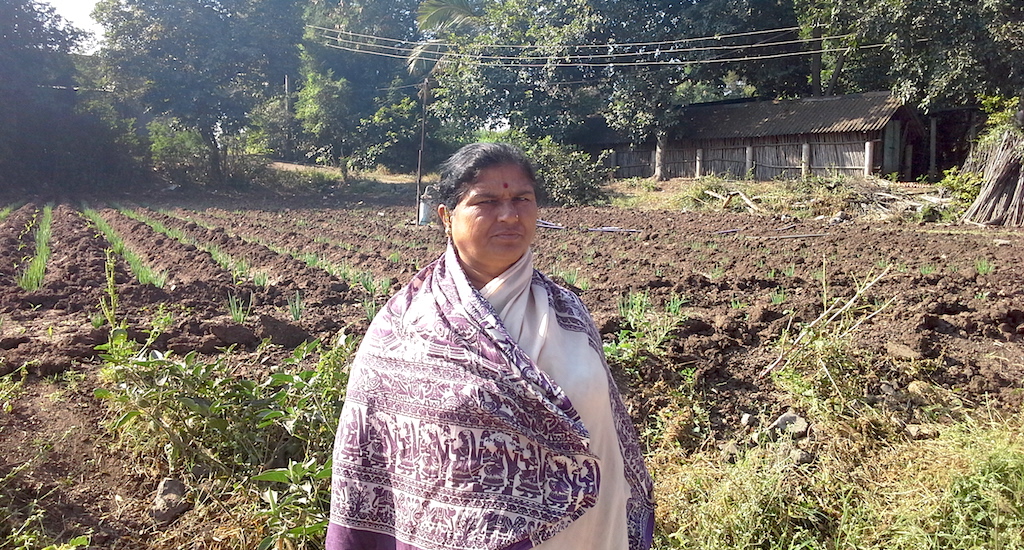 Farmers insist that they always keep cash handy to pay for a variety of goods and services. “We need to keep cash handy since we have to pay labor, feed for the cattle, diesel for the tractor, our own medication… all in cash. We usually have Rs 20-25,000 in cash at home. What use are these notes to us if the banks won’t accept them? This money is hard earned, the result of our sweat and blood, not black money,” was the angry outburst of a large landowner, Balasaheb Maruti Girme, who holds between 10-15 acres in scattered parcels in the Borawakemala area, about 3 km from Sawad.

Girme said that the threat by DCC-affiliated cooperative banks to go on strike would find support among farmers, leading to violence. That sounded ominous; an indicator of things to come unless urgent steps are taken, not necessarily in allowing these banks to dispense the new notes but more in dealing with people with stashes of cash. But that has eased now with the government letting NABARD extend credit to the DCC banks for normal agricultural activities.

Most of the marginal farmers, holding less than 3 acres of land, claim they have no problems with the withdrawal of the old, high denomination notes, other than the hassle of carrying larger quantities of Rs 100 notes or that change is hard to get for Rs 2,000.

Kalpana R. Borawake is a marginal farmer with approximately 2 acres of land in the drought prone area of Borawakemala, a tiny hamlet about 3 km from Saswad. During the rabi (winter) season, planting for which is currently underway, she grows jowar, bajra, wheat, onion and some vegetables. No cash crops for her so she is insulated from the vagaries of price movements and government bans. She sells most of her crop but keeps back enough for the family’s needs and to raise seeds since she does not buy seed. That is the old self-reliant way of mixed farming still being practiced.

Farm labor in the area has come from the even more drought-prone areas of Solapur and Latur. Sangita Ankush Mahanwar, who migrated from Barshi in Solapur district 15 years ago, said they were paid their weekly wages in Rs 100 notes. And since she has a bank account under the Jan Dhan Yojana, she has no issues over exchanging old now illegal notes. Her unstated view was she has no disposable money; where is she going to get Rs 500 or Rs 1000 notes? What they earn, they spend, just about making ends meet.

Sayaji Amrut Garbade, another farm laborer from Nanded district, added his monthly salary of Rs 6500 is not paid in high denomination notes so he has no problem either.

Some of the younger farmers quietly talk of approaches being made by people with unaccounted money, offering huge discounts, since agricultural income is not taxable. Shrewd farmers know the limits they can launder, based on land records and previous incomes and there are not many takers.

The inescapable conclusion emerges that the only victims in rural areas are the growers and sellers of fruits and vegetables. If this experience leads to the creation of cold chains and other farm gate facilities, it would be worthwhile lesson learned.