Mr/Ms Ministers, When And How Did You Change Your Lakhs in Hand?

NEW DELHI: With the exception of the Vice President of the Indian National Congress (INC) who queued up before a bank branch in Delhi to exchange a small sum of the demonetised notes for new ones, people did not see any other political leader from any other political party queueing up before banks like them with money in hand and worries in their minds about the uncertain future. Media reports indicate several unfortunate incidents of citizens dying while standing in serpentine queues. Many more have been asking publicly why the political leaders are not found standing before banks like them.

Readers will recollect the headlines in several newspapers CAH- the Hon'ble Prime Minister has directed MPs of his Bharatiya Janata Party (BJP) to declare their bank transactions to the President of the Party in a bid to lead by example to come clean on their actions 'after' the decision to demonetise currency notes of Rs. 500 and Rs. 1000 denomination.

The leader of a prominent political party has demanded transparency regarding the alleged financial dealings of the top leaders of the BJP. Meanwhile the print and the electronic media have covered the travails of citizens across the country who have rushed to banks to deposit their old currency notes and exchange some for the newly printed Rs. 2000 and Rs. 500 bank notes.

Thanks to the Code of Conduct (attachment which I obtained this through the RTI Act) laid down for Ministers (Union and State levels) during the 1960s and revised from time to time, they are required to declare their assets and liabilities details apart from other dealings, where they may have financial interests. Similarly, as Members of the Lok Sabha and the Rajya Sabha, Ministers declare details of their assets and liabilities in accordance with Section 75A of the Representation of the People Act, 1951 (see pages 38-39 in this document). These declarations are voluntarily disclosed by the Government.

They contain details of the "cash in hand" declared by every Minister in addition to details of bank deposits, other movable and immovable property that they own along with similar details of assets owned by hi or her spouse and dependent children. These details declared by most of the Union Ministers as on 31st March 2016 are accessible on the official website of the Prime Minister's office. While some declarations seem to have been made for the purpose of complying with the Code of Conduct, others seem to have submitted the declarations furnished to Parliament under the respective House Rules.

I have compiled the data about how much "cash in hand" Ministers including the Hon'ble Prime Minister have declared (1st attachment, accessible here) officially by the end of March 2016. As this is publicly declared information, there is no reason to suspect any connection with "black money". Frustrating people with black money and forcing them to come clean is one of the reasons why the Government has said that it too the decision to demonetise high value currency notes.

However, every citizen who has stood for hours before banks to either deposit the old currency notes in their accounts or exchange them for the new ones has the right to know when and where did the Ministers deposit the small and large sums of cash they held in their bank accounts. This is a small way of commemorating those citizens who died standing in serpentine queues before banks.

The first question that every citizen should ask is:

1) whether these Ministers ever stood in queues like the common citizen whom they are sworn to serve, to deposit their demonetised currency notes unless all of them had cash in smaller denominations or sent their peons or relatives or some other person to make the transaction? When did they actually make these deposits?

The Government has indicated that the Income Tax (IT) Department may turn its scanner on account holders who deposit more than Rs. 2.5 lakhs in cash in their accounts either in one go or in installments. So the second question that citizens should ask is:

2) whether the IT Dept. will look at Ministers making deposits above Rs. 2.5 lakhs with the same degree of suspicion as they will at an ordinary citizen who makes similar high value deposits?

In order to dispel any doubt about whether the declaration includes money deposited in bank have compiled this data also in a separate column in the 1st attachment to contrast it with the data about "cash in hand" declared by the Ministers.

1) A large number of Ministers have declared cash in hand separately from bank balance and deposits of various kinds. I have indicated both figures against each name wherever data is available separately. I have not included these categories of disclosure for their spouses and dependents as they are not public figures. The remarks in the last column at some rows contain my comments about the quality of data.

2) The cells highlighted in red indicate those Ministers whose tax history must be scrutinised, in theory, if they have deposited demonetised notes worth above Rs. 2.5 lakhs because such rules are applicable to ordinary citizens.

3) Assets and Liabilities Declarations of 2 Cabinet Ministers, and 17 Ministers of State are not published on the PMO's website (coded as ND in the first attachment accessible here). Whether they have actually made any declaration to the PM or to the Houses of which they are Members is not known.

The biggest amount of "cash in hand" in the Council of Ministers was declared by the Finance Minister - more than Rs. 65 lakhs. I have triple checked this data published on the PMO's website. The Hon'ble Prime Minister declared more than Rs. 89,000 as cash in hand. When did all these Ministers go to banks or whom did they send to deposit these amounts and when, are very important question that every citizen must ask.

4) 6 Cabinet Ministers and 5 Ministers of State have not included "cash in hand" data in their declarations, to the best of my knowledge.

Given these facts, in my humble opinion, the Government's view is that there is no fundamental right to privacy for anybody including for Ministers under the Constitution. So Section 8(1)(j) of the RTI Act which was designed to protect personal information from being disclosed leading to unwarranted invasion of the privacy of an individual, becomes an unreasonable restriction on the fundamental right to information which is a part of the right to freedom of speech end expression guaranteed under Article 19(1)(a) of the Constitution. So, there should be no legal bar on providing answers to the information sought in the two queries listed above.

Readers may kindly note that I am not making any allegations of "black money" or money that is not accounted for in the declarations of Ministers. However in a country whose national motto is satyameva jayate (truth alone shall triumph) and given the BJP's latest step to demand transparency from its own MPs, citizens should push the envelope towards greater transparency of Ministers and other elected representatives.

Information about how much "cash in hand" was declared by candidates who got elected as MPs and MLAs is available on the dedicated website being maintained by the Association for Democratic Reforms- http://myneta.info/. Readers might like to ask similar questions from MPs and MLAs belonging to all political parties. 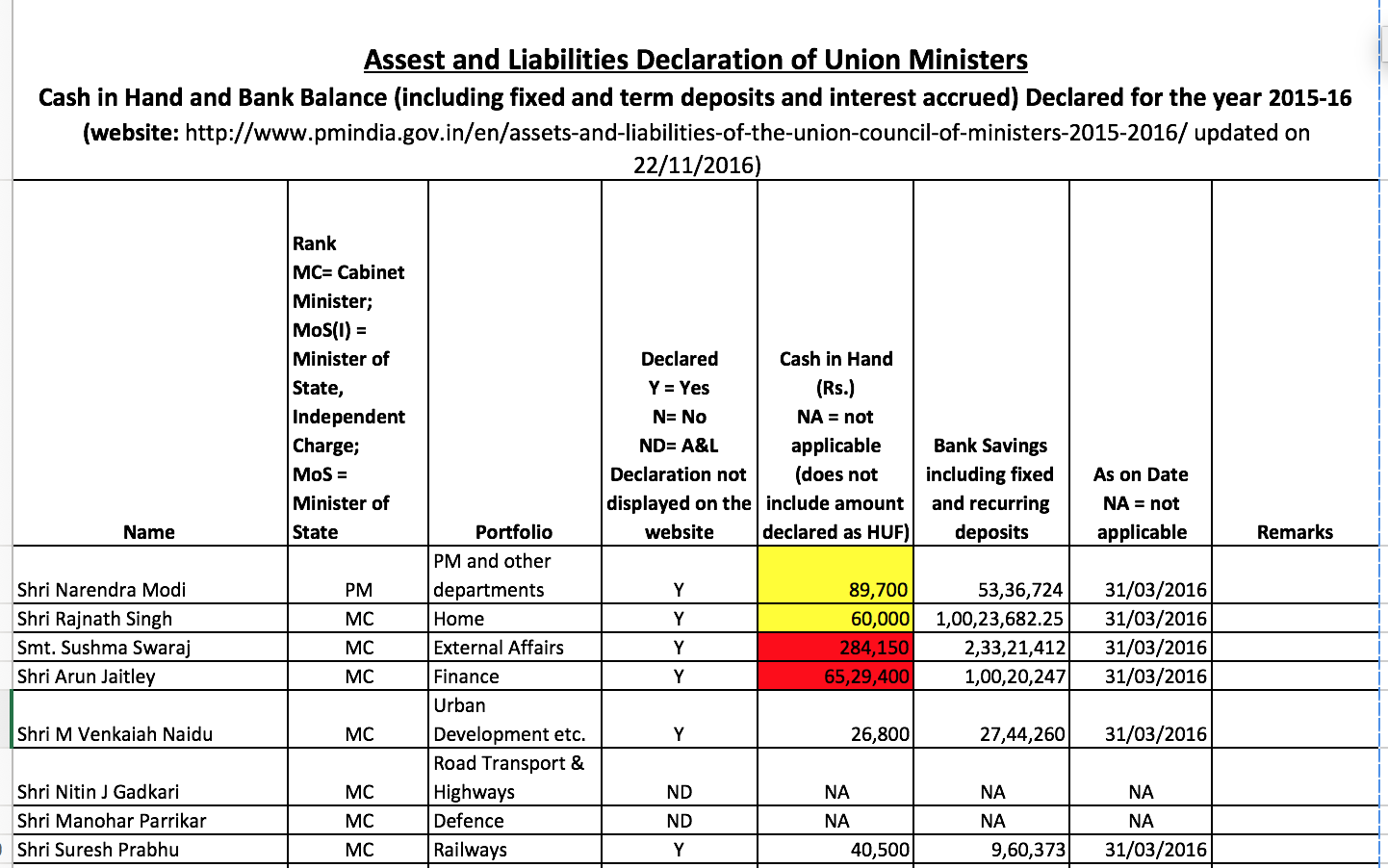 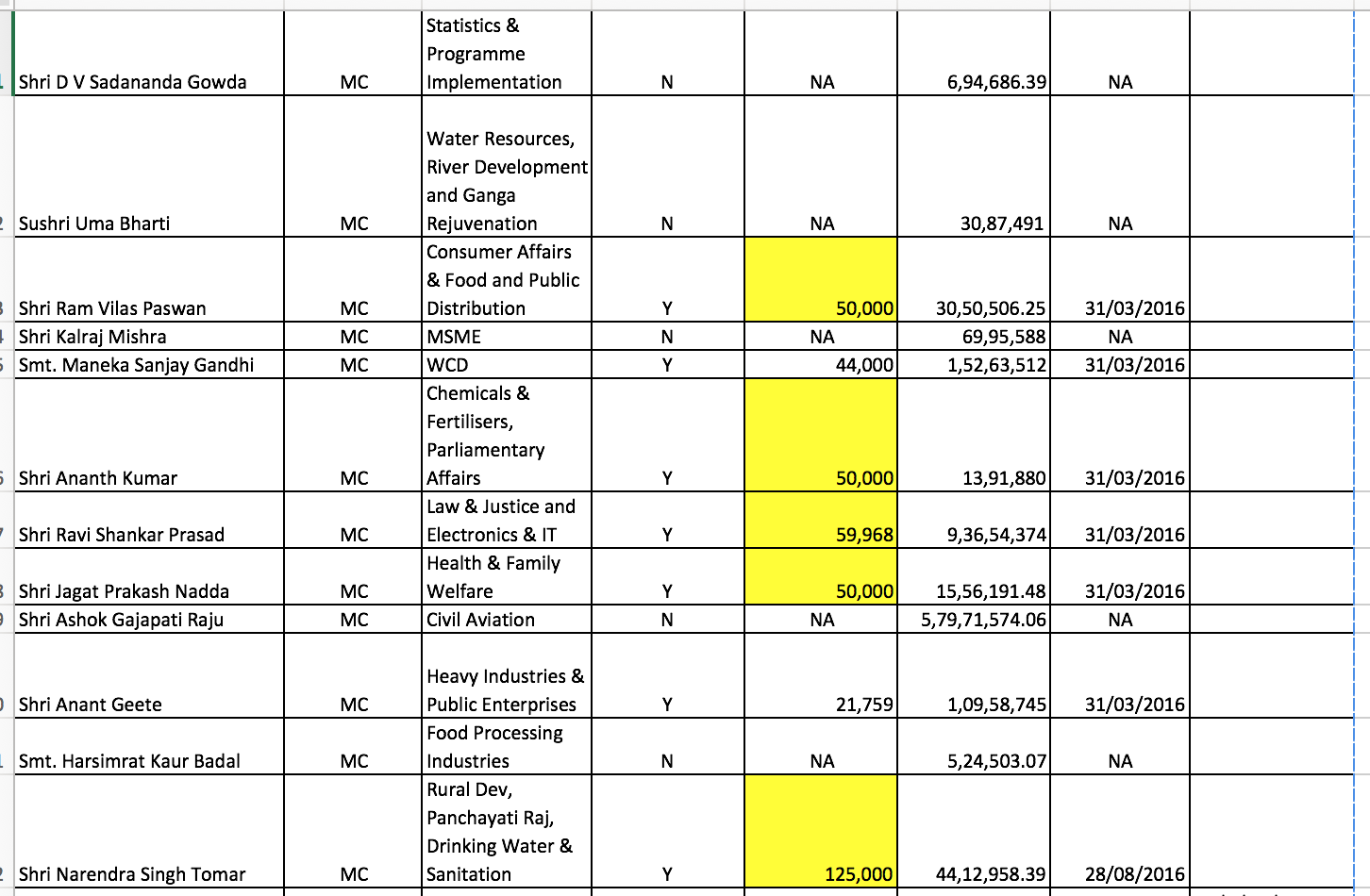 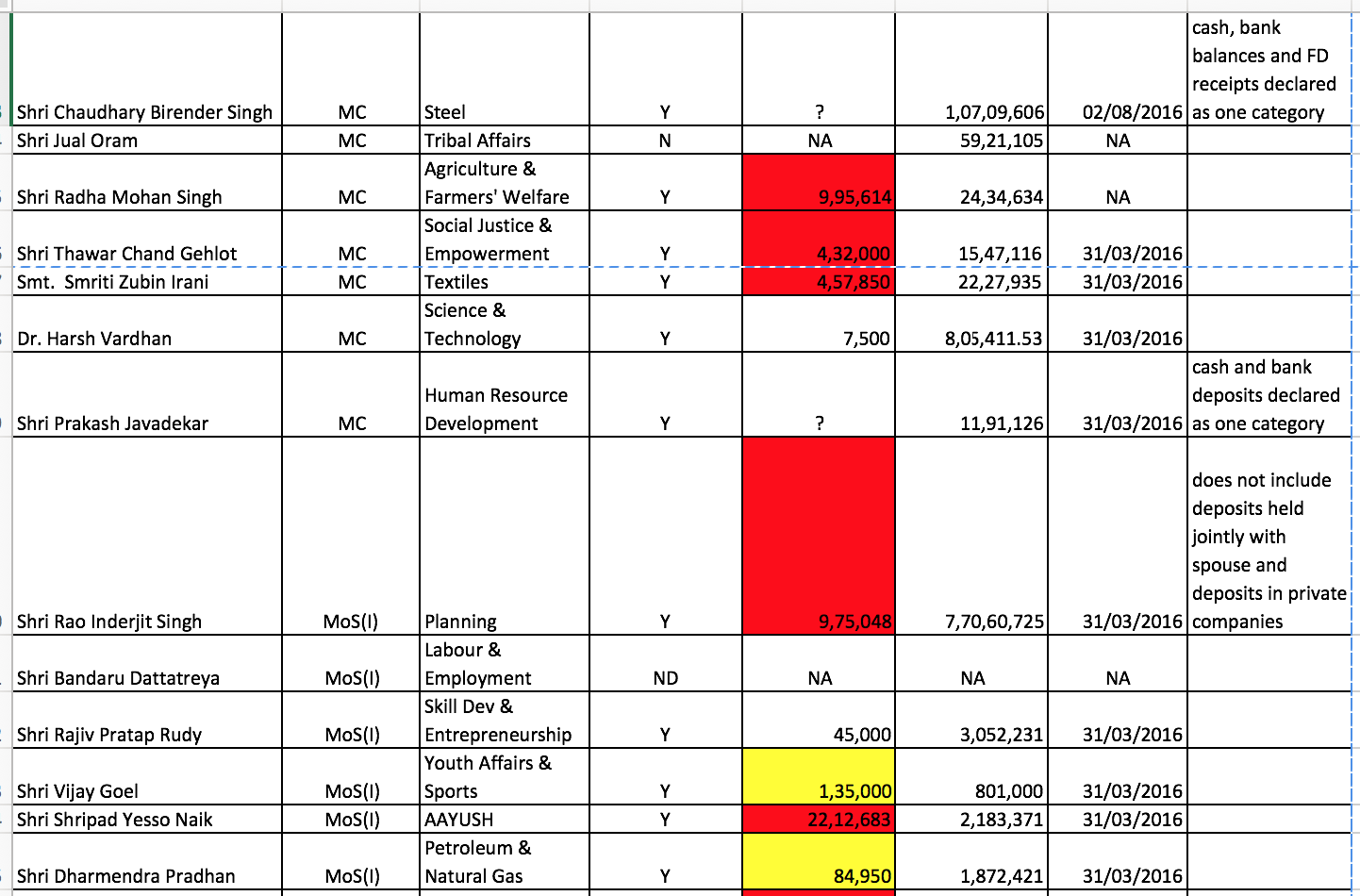 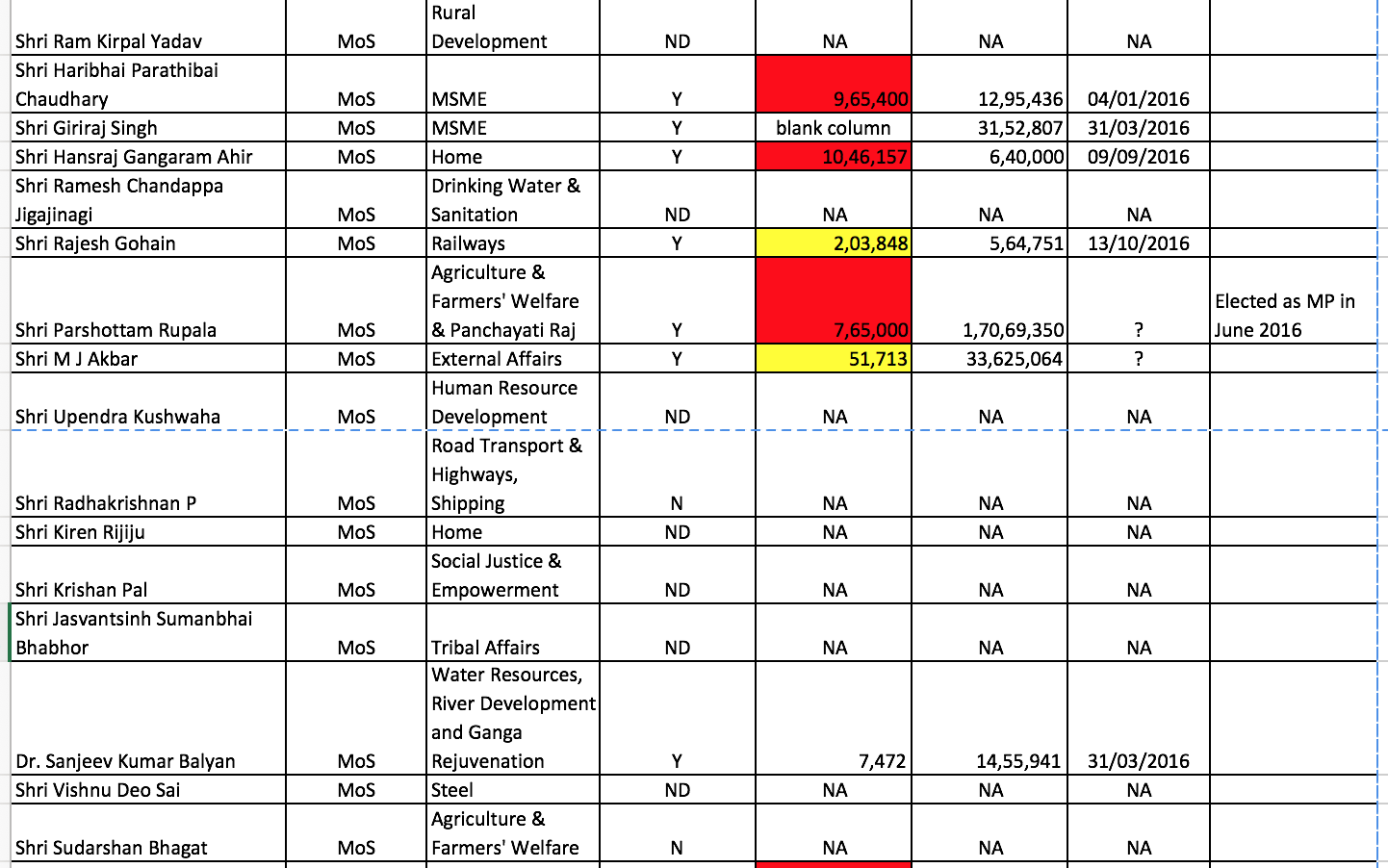 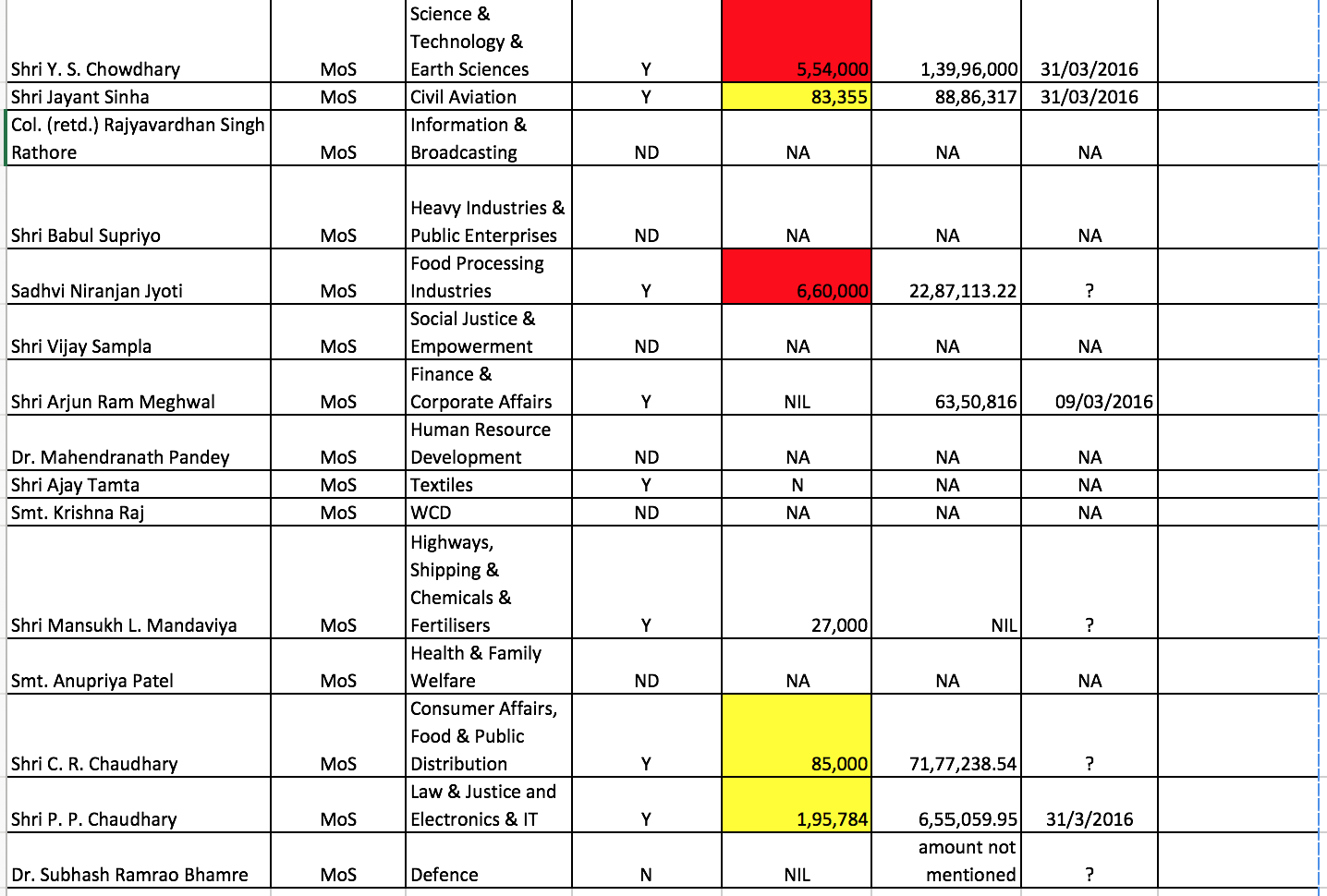 (The full enquiry and related documents can be accessed on the Commonwealth Human Rights Initiative website).