MEERUT: At first glance, little in the busy city of Meerut is indicative of the fact that this area is scheduled to go to the polls in just under three weeks. There are no election posters or other signs of party campaigning, and life seems to be hurrying along inspite of the upcoming Uttar Pradesh elections.

Despite the absence of visible electioneering, a conversation with the locals quickly reveals that politics remains the pressing concern as everyone has a prudent opinion on the upcoming polls. The recent decision to demonetise 500 and 1000 rupee notes has had a deep impact, with business across sectors being adversely affected. Arshad, a local fruit seller, tells us that “demonetisation has killed all work.” “It is very hard to get by,” he says, adding that he is struggling to put his three children through school. “While our earnings have gone down since demonetisation, they have increased the tax required to park carts at the chowk,” he says. 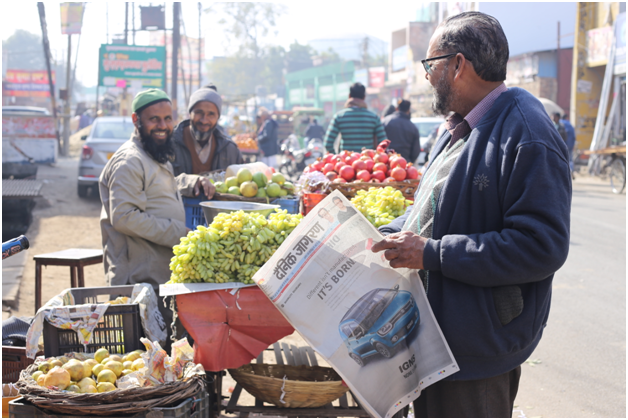 Arshad now has to pay rupees 15 per day for parking his small cart selling pomegranate, up five rupees from the previous tax of rupees 10 per day. “I’m lucky if I’m left with anything to take home at the end of the day,” he says. When asked about the upcoming elections, Arshad is certain that Akhilesh Yadav of the Samajwadi Party will win. “The Muslim vote has shifted to Akhilesh,” he says.

Arshad’s analysis of the Muslim vote is corroborated by what we saw across western UP, as we travelled from New Delhi through Meerut to Muzaffarnagar. At this point, several others gather around the cart, helping themselves freely to the pomegranate Arshad was peeling. “Akhilesh will do well,” says Narendra Singh. “The BJP has shot itself in the foot. For six percent black money, they have finished off 94 percent of the people.” Singh feels that demonetisation combined with the BJP’s past record of false promises will work against the ruling party at the centre in the upcoming state polls.

A tall man in a white jacket with the words ‘Armani’ stamped across the front nods in agreement. “I’m from the Jat community,” he says, “and the BJP has let us all down.” This too, is a view that we see expressed often by the Jat community in the area, especially in Muzaffarnagar that had been hit by Hindu-Muslim riots in 2013. The Jat vote seems to be rallying behind Ajit Singh of the Rashtriya Lok Dal, with Jats in the area saying that they would have no hesitation to vote for the SP if the two parties formed an alliance. At the time of writing, the alliance seems to have fallen through. 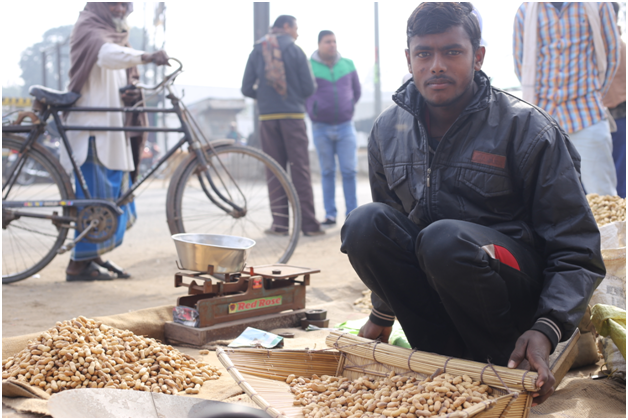 A few kilometers ahead at a market place, we speak to two young boys at a lock and key shop. Bilal feels that this election is Akhilesh Yadav’s to lose. “Demonetisation has had a very bad impact on everyone here,” Bilal says, “and since Akhilesh and Mulayam Yadav’s falling out, the younger Yadav has emerged more popular and far stronger.” “He should capitalise on this wave of support,” Bilal’s friend chimes in.

The market is largely composed of tyre, bag and lock and key stores. As we walk from the carts to the more concrete stores, the mood swiftly changes. “Demonetisation has had no impact on us,” say two men behind the counter at a ‘Tyre House’. “We are voting for Modi, as will this whole area,” they say. The men, when prodded however, admit that Akhilesh is becoming increasingly popular. “The drama between father and son has worked in the latter’s favour… People have associated the sins of the party with Mulayam, and Akhilesh has somehow gotten a clean chit,” one man says. “That, and the fact that he’s distributed laptops and tablets, so obviously the young will support him,” explains the other.

A few meters ahead, an old gentleman at a store refuses to provide his assessment of the political climate. “Time will tell,” he says. When asked about demonetisation, he readily admits that business is down by over 40 percent. “Small shopkeepers are the worst affected,” he explains. 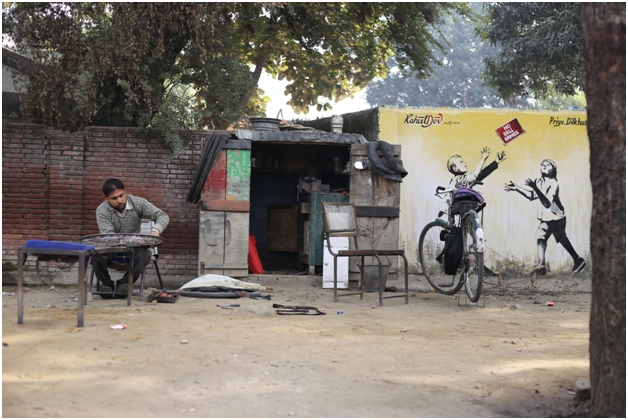 The hugely adversarial impact of demonetisation on the daily lives of people is another uniform theme as we travel across the region. In commercial areas such as Meerut, it’s taken on the form of impacting retail businesses, whereas elsewhere, factories have shut and labour has returned home empty handed. While in rural areas the anger is more palpable, in Meerut, many think that things will soon get better.

“Demonetisation has had an impact, but things are slowly improving,” says a middle aged man at a bag store at a local city market. “There was a wave for Modi in this area, but remember - there’s a difference between central and state elections, and demonetisation has definitely worked against the central party in the last few months.” When asked which way the vote seemed to be swinging, the man had the following assessment: “The family drama has helped Akhilesh, as Mulayam has been branded the villain in people’s eyes. This is also because Akhilesh has done his share of work -- there’s been development, and he’s distributed cycles and rickshaws… things like that matter to people here.”

This wave of support for Akhilesh is an interesting political development, as this area is known to be Bahujan Samaj Party (BSP) leader Mayawati’s belt. As we travelled from Meerut into Muzaffarnagar, the voice for Akhilesh seemingly grew louder. At several places, people gathered in crowds to chant his name. While the vote for the BJP was able to offer a counter in some places, especially in cities like Meerut, Mayawati’s support base was a lot quieter. 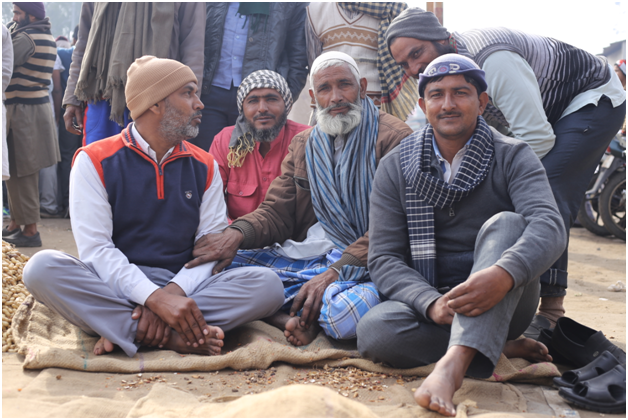 As a gentleman at a chowk in Meerut very correctly said, “do not discount Mayawati’s vote. It’s silent, but exists in large numbers.”

In the 2014 Lok Sabha elections, Mayawati’s vote base had -- in large numbers -- moved. We travelled into the dalit areas in western UP to assess the current scenario. The first stop was a tiny village in Sardhana -- the constituency of BJP MLA Sangeet Som, who was recently in the news for screening a documentary containing parts of his speech related to the Dadri lynching case and his arrest during the Muzaffarnagar riots.

As we approach the village, groups of men sit along the highway playing cards. Not wanting to disturb them, we take a the narrow lane into the hamlet. Two older gentlemen greet us with a smile. “This is a BJP area,” they tell us. “Sangeet Som is the sitting MLA, but he’s never here.” “Demonetisation has had a big impact; it’s troubled everyone… the BJP vote is down because of it.” When asked about Akhilesh Yadav, the men admit he’s popular.

So far, the men have echoed what we’ve heard across the district. As they continue, however, an alternative assessment begins to emerge. “Akhilesh has seen a huge surge in popularity, but at the end of the day, there’s no difference between father and son. In the end, the Muslim and Jat vote -- despite what people say -- will go to the BSP.” 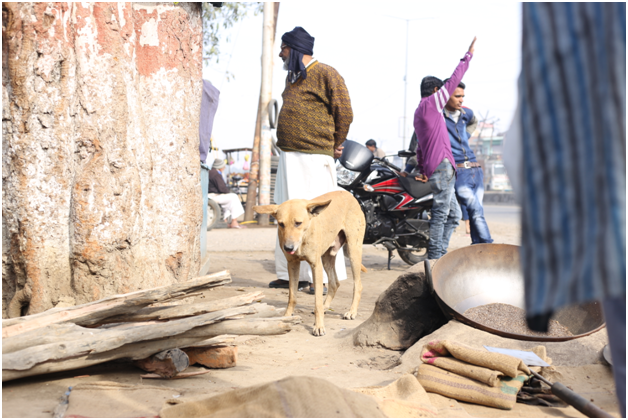 The men, we realise, are from the Jatav community -- and this hamlet is a Jatav village. Jatavs are part of the chamar caste, belonging to the dalit community and thus, part of Mayawati’s primary voter base. The men, Anil and Bhagwandas, are shopkeepers, and euphoric about the possibility of a BSP victory. When prodded, they admit they hadn’t voted for the BSP leader in the 2014 elections. “We needed to do that to signal to her that she shouldn’t become complacent,” they explain. “She’s understood that.”

As we walk through the hamlet, the support for Mayawati is evident. A young man in a hair salon says that demonetisation has had little impact on him, but the BJP was never an option. Two ladies with their children further into the village echo a similar sentiment. “We had voted for Modi but he’s done nothing for us. Labourers are still in a bad state. People make fun of Mayawati, but at the end of the day, she’s the only one who has done anything for us.”

An older woman sitting on a charpai in front of a tiny brick house with two buffaloes tied up in the shade has a different point of view -- one that is perhaps indicative of the political reality of this area. “It doesn’t matter who we vote for,” she says matter of factly. “Over the years, several politicians have come and gone… but things here have remained exactly the same. They don’t do anything for us,” she concludes. A crowd of people has gathered around, no one disagrees.