To Campaign Or Not to Campaign: The Congress Waits For Priyanka Vadra in UP

NEW DELHI: Come the elections in Uttar Pradesh and Priyanka Vadra returns to the spotlights. This time with the news, deliberately leaked to the media, of intevening personally to clinch the seat sharing deal with the Samajwadi party. And followed almost immediately by a tweet taking on BJPs Vinay Katiyar for his comment on “beautiful campaigners.” 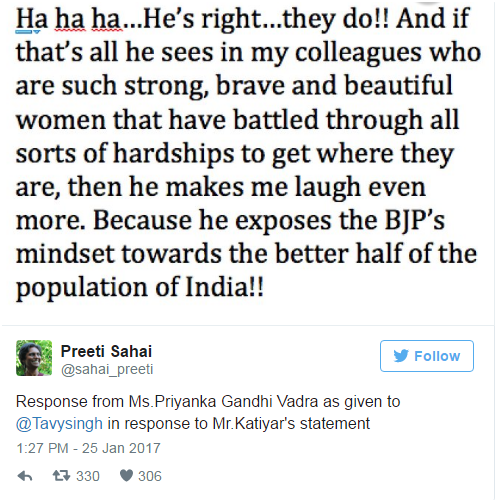 The Congress has let it be known that the charismatic daughter of the Congress First Family will not be campaigning across the state, but just in Amethi and Rae Bareilly that the family regards as part of its UP legacy. However, the hope remains that she will extend her itinerary to cover other parts of the state, and not just that but appear on the same stage as her brother Rahul Gandhi and the young Chief Minister of UP with whom both share a good rapport.

This, sources said, is the exchange agreed upon for the extra seats that the Samajwadi party finally agreed to part with after intense and at times angry negotiations. Yadav had given 103 seats to the Congress that has now been increased to 109. The negotiations held up the campaign for precious days with the candidates now being finalised, even as Yadav begins his election campaign.

There is no doubt that currently the Congress is seeking a piggyback ride on Akhilesh Yadav’s surging popularity as it has no real vote in the state. Despite Rahul Gandhi’s efforts, and many sorays into UP, the vote while curious has remained aloof. The BJP has taken away the Congress upper caste vote, the BSP has captured the Dalit vote, and the Samajwadi has won the loyalty of the Muslim vote. Despite an effort to regain what the Congress still looks upon as its traditional vote bank, the party has not succeeded in making a dent. It remains confined to the odd constitutency where its legislator has done some work, and retained a support base.

The Congress leaders have no real idea as to why Priyanka Vadra whom all of them see as more charismatic than her brother, is so reluctant to jump into the fray. Although she has been playing a more proactive role in determining candidates and strategy for the elections, she has not given any assurance of a larger campaign despite the clamour for this. However, a senior leader was sure that this time there would be more of Priyanka Vadra in the campaign, as the Congress is looking at UP to increase its tally in the Assembly and through it prepare more seriously for the Lok Sabha elections in 2019.

Significantly UP is the only state where the entire family emerges for the campaign. Although it is almost certain that Congress president Sonia Gandhi will not be campaigning because of the health setback she suffered while on a roadshow in Varanasi last year, both the sister and brother are expected to do the honours. Little has been seen of Rahul Gandhi in recent weeks, with the final list of candidates in Punjab and the inclusion of cricketer Navjot Singh Sidhu being delayed because of his winter holiday.

The Congress party has lost its edge in Punjab according to reports from the state with the Sidhu factor not being seen as serious by the voters, and Congress state leader Amarinder Singh still smarting under the refusal of the top brass to declare him as the Chief Minister candidate for Punjab. Instead latest reports suggest that the Aam Aadmi Party is gaining ground, particularly in the rural areas that are looking for an option away from the Akali Dal-BJP alliance, and the Congress that has not recovered lost ground in the state.

Priyanka Vadra has also limited herself to UP, with her husband Robert now also being heard in admonishing Katyar and demanding an apology for his sexist comments. Katiya of course refused to apologise but Vadra’s intervention seems to suggest that more will be seen of him as well in these elections, with the first day of polling set for February 11. Vadra had been fairly active in Amethi earlier, leading bike campaigns for the Congress party, He has been relatively quiet, remaining out of the political sphere in recent years, more so as he is often targeted by the BJP on charges of alleged corruption.

Priyanka Vadra continues to draw a crowd, and never having been tested on larger ground, has the Congress convinced that she will turn the support for her into votes. It is with this hope that the party is again hoping to see her in the field in these polls in UP, even as it mentally gets ready for the usual disappointment.