Caste UnPlugged: Non-Yadav OBCs and Non-Jatav Dalits May Decide the UP Outcome

NEW DELHI: The poll bigule has been blown in UP and the nominations for Phase I & II have started. The Yadav family feud (drama) has settled down. The SP and INC have formalized their alliance. All parties have announced candidates for most of the seats. The stage is set for an exciting triangular contest and it is very difficult to predict the winner.

Caste and religion have always played a key role in UP politics. Primarily because unlike most other States, the leading caste groupings are very large (Brahmins, Thakurs, Muslims, Jatavs and Yadavs each constitute more than 8% of the State’s population). Most of these groups have traditionally voted for one of the major parties – Upper Caste (BJP), Dalits (BSP), Muslims and Yadavs (SP) as shown below. 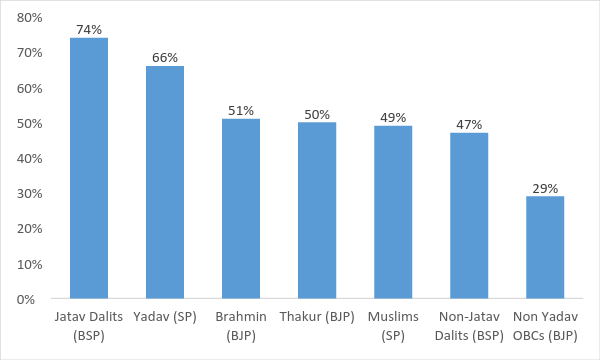 We categorize the support of parties from caste groups into:

Firstly, these voting blocks are not homogenous, rather they can be further broken down into smaller caste groups. Second, none of the parties expressly represent them, though various parties have done their best to accommodate leaders from these two caste groups.

In 2014 BJP received unprecedented support from Non-Yadav OBCs (60%). Modi is an OBC himself which helped in this consolidation in favour of the party. BJP also overtook BSP as the number one preference of Non-Jatavs. While BJP bagged 45% of their votes (+34%), BSP recorded 29% (-16%).

Non-Yadav OBCs consist of 200 plus sub-caste groups like Kurmi, Koeri, Lodh, Gujjar, Rajbhar etc. and account for approx. 30% of population. These groups have different dynamics and do not vote en-block. While, Yadavs are SP supporters, other sub-groups have not exhibited rigid caste loyalties. Smaller parties like Apna Dal and SBSP also have good influence among a section of OBCs, specifically Kurmis and Rajbhars respectively. 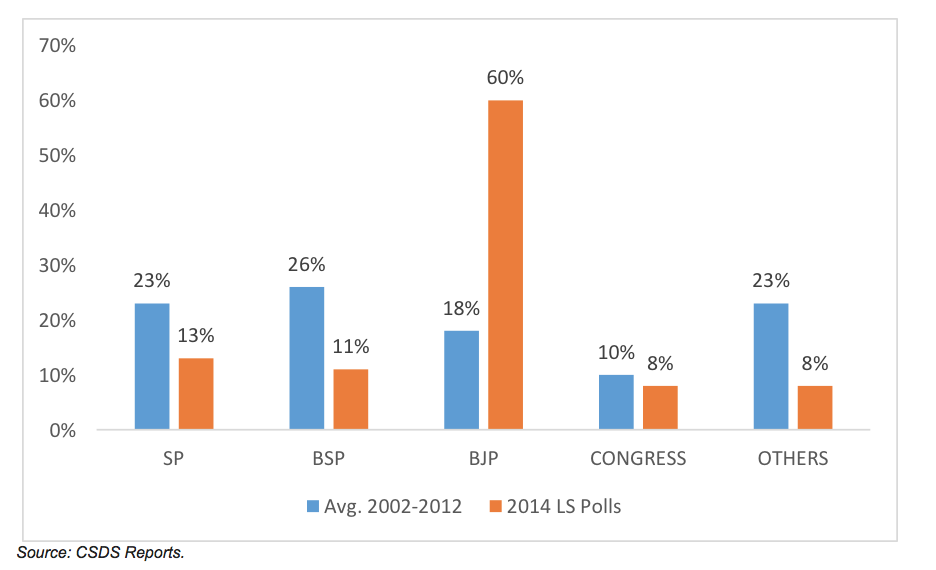 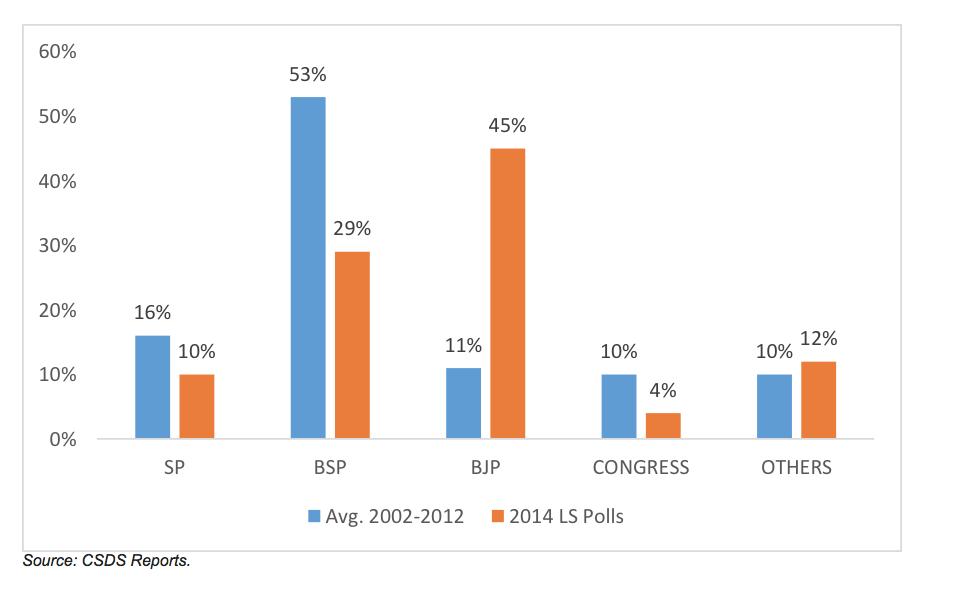 Dalits consist of Jatavs (Chamars) and non-Jatavs. Jatavs account for 12% of population. Mayawati belongs to this caste group. The balance 9% include Dom, Dhobi, Pasi, Kori, Valmiki etc are collectively called non-Jatavs. Both these groups have historically supported BSP. But the level of BSP support has been lower among non-Jatavs (half) than Jatavs (three-fourth) for BSP as shown above (Chart 1).

All the top three contenders will be vying for a sizeable chunk of OBC vote. BJP has made Keshav Prasad Maurya its state president. It has poached some OBC leaders like Swami Prasad Maurya from BSP. It has also formed an alliance with SBSP and Apna Dal.

BJP will need to retain majority of the support it received in central elections. The quantum of Non-Yadav OBC support to BJP may ultimately make or mar its plans in UP. BSP and SP are also trying hard to regain their lost vote share amongst Non Yadav OBCs. A 20%-25% support translates into 6%-7.5% vote share which is handsome. The sheer size of this group means it can ally with another caste group (upper caste / dalits / yadavs & muslims) to become a disruptive force in this election.

Post Lok Sabha polls, opposition parties including BSP have raised issue of Rohith Vermula suicide and Unnao managing to create a perception that BJP is anti-Dalit. This has negated the inroads made by BJP in the non-Jatav vote bank. BJP had given up on this vote bank and was fully concentrating on upper castes and non Yadav OBCs.

However, the alliance of SP with Congress has forced BJP to have a re-look at non-Jatav votes and maintain its 2014 show which will be crucial. BJP is likely to play up the notion that all the benefits of Maya Govt. and important posts in her party have been grabbed by Chamar / Jatav community. This could help them wean away a sizeable chunk which could add 2%-4% to its overall vote share. SP & Congress will also be targeting this vote bank of Mayawati. A section of disgruntled non-Jatavs voted for Congress and SP in 2012 state polls contributing to Maya’s defeat.

SP-Congress alliance has meant that Muslims are likely to stick with Akhilesh and ignore overtures from Mayawati’s BSP except in seats where BSP candidate is strong. This leaves only two sub-caste groups, non-Jatavs (vulnerable vote bank of BSP) and non-Yadav OBCs (non-aligned vote bank) who will need to be actively wooed by all and whose support in the end may well determine the ultimate winner.

(This article has been co-authored by Amitabh Tiwari and Subhash Chandra. They are independent political consultants and the authors of ‘Battle of Bihar’)