NEW DELHI: The Union Budget 2017-18 released yesterday is a far cry away from the promises made by the government in the last year. Their priority clearly lies elsewhere and not with the marginalised communities. The danger of merging plan and non-plan has almost invisibilised the sub plans, with the budget moving away from the Sub-Plan policy of targeted budget to welfarism.

Analysis of the allocations under Scheduled Caste Sub Plan (SCSP) and Tribal Sub Plan (TSP), reveals a recurring trend of under-allocation in 2017-18 wherein SCSP comprises only 2.50 % and TSP to only 1.53 of the total allocations which is not even the half of the mandated amount. The following table clearly brings this out. 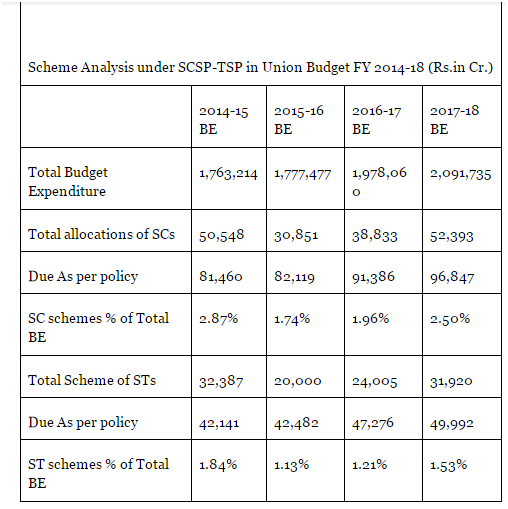 The Ministry of Finance issued clear directions to all the relevant ministries/Departments via GO No. F.1 (16)- B (AC/ 2011 dated August 23, 2016 to follow the Jadhav guidelines for allocations to the SC/ST schemes. Post Plan and Non-Plan merger, using the directives of the Ministry, Jadhav guidelines were supposed to be followed for calculating due allocations for SCs and STs for the current year. 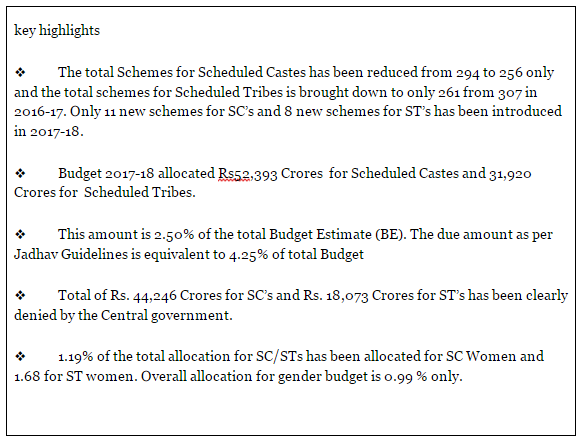 Women from Dalit and Adivasi communities find themselves triply discriminated against based on their caste/tribe, class and gendered location. Any developmental approach needs to factor in their needs by adequately redistributing resources in their favour as well as ensuring appropriate access to enhance their capabilities. The current budget, in DAAA’s analysis shows that they continue to be marginalised within the SC/ST allocations. It is shocking to calculate that the total allocation for Dalit-Adivasi women forms a meagre 0.99% of the total Gender Budget Statement. However, within the total allocation under the SC/ST welfare schemes, allocation for Dalit women amount to 1.19% within SC Schemes and 1.68% for ST Schemes.

Several of the directly beneficial schemes for SCs & STs like National Scheduled Caste Finance Development Corp, Venture Capital Fund For Scheduled Castes, credit guarantee fund for SCs, Self Employment of Manual Scavengers & Rehabilitation of Manual Scavengers, National Overseas Scholarships for SCs And Pre-Matric Scholarships for SC students etc have been severely under funded or funding has been slashed.

A deeper analysis of the nature of allocation for SC welfare schemes show that only 53% of total SC allocation is towards targeted schemes, which in turn amounts to only 1.3 % of the Total Budget Expenditure. The general or non-targeted schemes include Employees pension scheme, Improvement in salary scale of university and college teachers and other administrative expenses which are contra to the underlying principle of ‘directly benefit individuals, families and hamlets belonging to SC/ST Community’.

Although this budget shows an increase in the allocation in absolute terms, it is a retrogressive step for the empowerment and welfare of SC/STs. Several allocations which are of administrative in nature like salaries, interest payments, subsidies, pensions are merged into welfare schemes in the name of Plan, Non-plan merger.

The plague of a large proportion of non-targeted schemes continues. Merger of Planned and Non plan has legitimised large scale diversions of SC-ST funds to pensions, salaries etc. Most of all reducing the Sub-Plans with special programming for SCs and STs to mere allocations for SC/ST Welfare is definitely going back at least three decades of Planning for SC/ST development in this country.

(N Paul Divakar is currently General Secretary of National Campaign on Dalit Human Rights and is an expert on fiscal matters with specific reference to Scheduled caste sub plan and tribal sub plan. Analysis & Research has been prepared by the team at Dalit Arthik Adhikar Andolan-NCDHR.)