Punjab Polls:Thrilling Triangular Contest Set To Boil Down to Each Seat

CHANDIGARH: Punjab which goes to polls on Feb 4, 2017 is witnessing a truly triangular contest for the first time. AAP which stormed to power in Delhi made significant inroads in the state in 2014 Lok Sabha elections bagging 4 seats. The state witnessed alternate Congress and Akali Dal governments from 1967 to 2007. However in 2012 Akali Dal was able to break this trend and emerged victorious to earn a consecutive term.

In 2017, Akali Dal is encountering significant anti-incumbency, normal for any such long tenure government in power. Most analysts believe that Akalis will lose, not a surprise considering that even in 2014 Modi wave, the state bucked the trend. But who will win Punjab, is a million dollar question with no clear answer. Opinion polls are divided on the issue. India Today – Axis poll predicts a Congress win, ABP-CSDS predicts a hung assembly while VDP Associates predict an AAP win.

The base for any analysis or prediction for Punjab has to be 2014 Lok Sabha elections as AAP didn’t contest in 2012 state polls. In Lok Sabha Akalis were leading in 45, Congress in 37 and AAP in 33. AAP’s vote share to seats conversion ratio was the highest since its vote was concentrated in Malwa region, it won all its Lok Sabha seats from this region. AAP recorded highest vote share in Malwa, Akalis in Doaba and Congress in Manjha, each party having its pocket of influence.

Assembly leads based on Lok Sabha 2014 with vote share 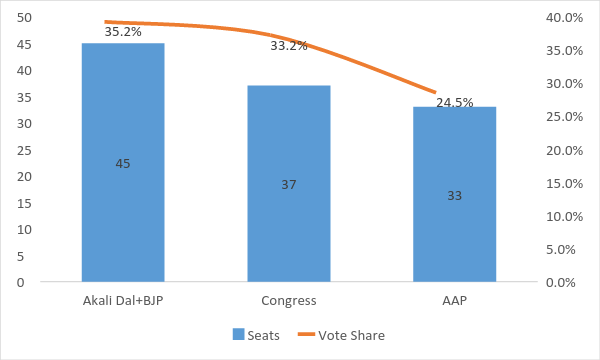 AAP has been running a diligent campaign for close to a year now exploiting public mood for change. Controversies, allegations of sale of tickets and exit of some top leaders has somewhat taken the sheen off their campaign. Arvind Kejriwal and his entire cabinet is camped in Punjab as they smell an opportunity like Delhi. People fed up with 60 plus years of alternate Congress-Akali rule, rampant drug menace, agrarian crisis and corruption see a hope in AAP. Their bottom up door to door campaigning is difficult to match for parties like Congress and Akalis who follow a top down approach driven by central leadership.

Congress on the other hand is relying on the anti-incumbency against Akalis and popularity of Amarinder (he is the most popular CM ever in history of Punjab as per CSDS survey. The party is projecting his administrative abilities. It is also highlighting what it calls the poor track record of AAP in Delhi. Congress is calling out people not to give such a sensitive state in the hands of AAP. Congress alleges AAP is hand in glove with pro Khalistan elements.

What is working for Congress is clearly the Captain factor. He leads the ratings for most preferred CM candidate (36% as per Axis poll vs 22% for Bhagwant Mann of AAP). We have seen in recent times that party whose leader enjoys highest ratings goes on to win the elections – Narendra Modi (All India), Nitish Kumar (Bihar), Kejriwal (Delhi), Mamata Banerjee (West Bengal), Jayalalithha (Tamil Nadu) etc. The fact that it has presence across all the three regions also is working in its favour.

AAP’s leadership position in Malwa (69 seats, 59% of assembly strength) means that no other party can win without having a decent show in the region. It also means AAP can win the state if it sweeps Malwa and gets a few seats in Doaba where it received similar support to Congress in 2014. The party also has been able to garner support among rural areas where people want to give it a chance (66 seats, majority of these seats are in Malwa). People’s drive for change can help it sail through. AAP is confident of repeating its 2014 performance and expects to garner support from youth, Hindu OBCs and Dalits.

Whether the state will witness a hung assembly or not, depends upon the extent of hammering which Akalis get. If they get anything less than 20 seats then either AAP or Congress will win depending upon turnout in their strong areas. The split of anti-incumbency votes could prevent Akalis from getting wiped out, in that case there will be a hung house with Congress as single largest party.

If what VADP projects turns out to be true then it would reckon as Akali’s worst performance in history since 1992. In 1992 Congress swept Punjab in the aftermath of Rajiv Gandhi’s death and Akalis were reduced to mere 3 seats.

Critics could argue that public has been giving decisive mandates and so a hung assembly situation may not arise, but they forget Delhi, Maharashtra and J&K elections, very recently, witnessed hung houses. Another set of people, argue that Congress will win these polls as AAP’s performance in Delhi has been poor. If performance was the criteria alone Congress would not have ruled the country for 60 plus years.

Will Akalis get a massive drubbing, will AAP spread its wings by bagging another state or will Captain win his last battle, all this remains to be seen. A thrilling contest ahead ultimately will boil down to each seat.