Drama in Amethi! A 'Rapist' And 2 Wives of A Raja Slug It Out

AMETHI: Sand mafia don, accused of gang rape, and Mining Minister in the Uttar Pradesh government till very recently was sitting in a village in his Amethi Assembly seat having tea and biscuits and asking for the votes. He looked relaxed, rather happy actually as he insisted that he would be winning the seat again---he is the sitting MLA---and that ‘Netaji’ Mulayam Singh would be coming to campaign for him on February 23.

But that was just before the Supreme Court stepped in. And a couple of hours later, or perhaps even as he was speaking to us the Court ordered the UP police to register a FIR against Prajapati for the gang rape of a 35 year old woman. She had moved the apex court after the state police had refused to register even a complaint against this powerful man. So powerful that he became the seed of the split between Mulayam Singh and his son CM Akhilesh Yadav.

The story goes as follows:

Prajapati, a resident of Amethi, is said to be very close to Mulayam Singh’s second and current wife Sadhana. As locals in Amethi told us, he is the financier. And a few political workers standing by (from an opposing party of course) laughed and said, “he financed her son’s multi-crore car.”

Unable to accept this increasing corruption, the CM sacked Prajapati from the Cabinet. A furious Mulayam Singh intervened immediately, restored Prajapati and sacked those close to the CM. The battle between father and son that almost destroyed the Samajwadi party started over this alleged corrupt---and now alleged rapist---Minister.

Akhilesh Yadav was left with no choice but to compromise. And accept that the man he wanted out of his government would be contesting the elections from Amethi. It was only after he accepted this that Mulayam Singh accepted the alliance with the Congress, said it was fine at least for the record, and pulled back from the open confrontation with his son. That he is openly campaigning for the Rashtriya Lok Dal candidates, instead of the Samajwadi party’s, and has been speaking for the BJP is now well known. However, publicly at least he is maintaining his peace.

Prajapati insisted that he would win, although in Amethi the alliance has broken entirely with Sanjay Sinh’s wife Amita Sinh contesting the elections as well. Prajapati said that for him there was no difference, in that he would win the elections as he had the last time, after defeating the Congress candidate who was not in alliance with him then.

But what he does not say is that the fact that Akhilesh Yadav is not supporting him, and will not be campaigning for him although his workers have been instructed to insist that the entire top brass of the SP will be turning up in Amethi in his favour.

In fact the Amethi Assembly seat has since turned into a potboiler. Even as the Yadav family was slugging it out in Lucknow, the Raja of Amethi Sanjay Singh, MP who is a strong influence in the area had made it clear to Rahul Gandhi that his wife Amita would be contesting the seat again. And that it was imperative for the Congress to field its own candidates in all the 10 Assembly segments of Rae Bareilly and Amethi if it wants to retain the Lok Sabha seats in the next general elections.

So as talks for the alliance moved forward the Congress claimed all the seats. Mulayam Singh for his wife’s favourite politician Prajapati who is also the sitting MLA from Amethi. And just when Sanjay and Amita got reconciled what passes for a “friendly contest” with the SP, the BJP stepped in with a new announcement. 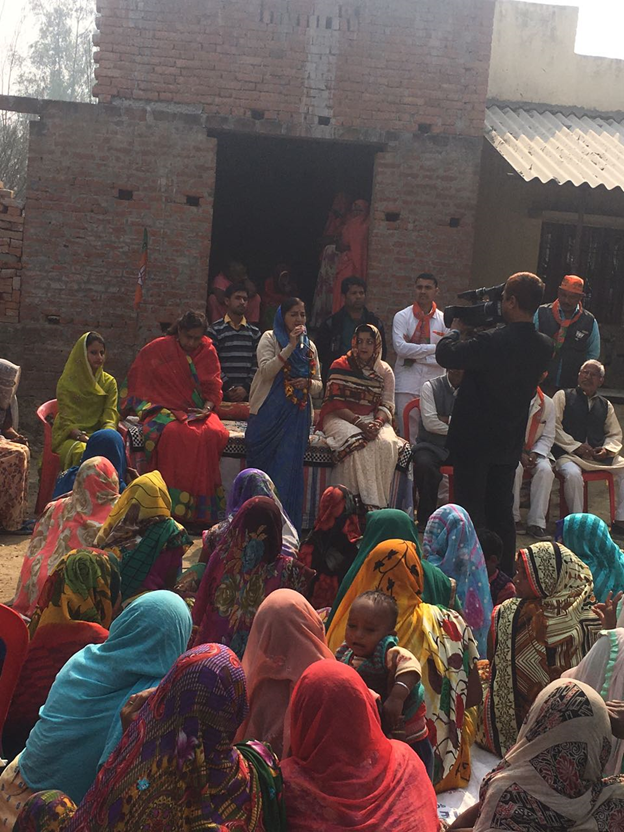 And this was that Garima Singh, Sanjay Singh’s first wife who he had left to marry Amita then a badminton player, was going to be the BJP candidate for the same seat. He has two daughters and a son from this first marriage and all the children are now out campaigning for their mother. The son was a claimant for the BJP ticket but according to local workers he was persuaded to part with it for his mother.

And one can see why. The BJP that does not really have vote in this Amethi Assembly seat, has managed to embarass the Congress and infuse some drama into the election. More so as Garima Singh and her daughter Mahima are going around campaigning against Sanjay Singh, of insisting that it is a fight for justice and rights for the deserted wife, and of course not really explaining why all this is happening 25 years after the event.

We caught up with Garima Singh in a small village where first her daughter spoke at some length, of how badly her mother had been treated, and how she was now back with her people asking for justice. Garima Singh herself repeated this, maintaining that she was in the field not for greed of money or power unlike others, and just wanted justice and to serve the people. The women listened to her quietly, and BJP workers came up to say, that this was a fight between justice and injustice. The intention thus is to make this as personal as possible.

Amita Singh, and Sanjay are, however, carrying out a professional campaign with no reference to the first wife or the children. They have managed to lift the campaign according to locals, more so after the opening rally that has been the best attended in this segment so far. Amita looking fresh and pretty dashed in and out, going to a distant village as someone had been killed, and then rushing back for a meeting of party workers and then back to the villages….For the record she and Sanjay Singh came together after her husband of the time, a professional badminton player as well, was killed. Sanjay Singh was booked for this but later freed.

Interestingly the story shared with much laughter by local Congress workers is that BJP President Amit Shah came to Amethi for Garima Singh to a crowd of less than 5000. “He was so angry that when he left he asked them how they could expect to attain power with such numbers,” Sanjay Singh’s workers said. And then another added, “and the local BJP leader who is also their candidate from the neighbouring constituency shouted, “Amita Singh Zindabad” twice instead of Garima Singh and they had to rush and snatch the mike from him!”

It is a battle royal, with the courts now directing the UP police to take action against Prajapati within eight weeks. So even if he wins, he loses. As do Mulayam Singh and his second wife.