On The Campaign Trail: Amethi And Raebareli

AMETHI/RAEBARELI: An aspect that makes the Uttar Pradesh elections almost impossible to predict is the fact that in addition to religious and caste groupings, each of the state’s 403 assembly seats has a wide array of localised political factors at play.

Nowhere is this more evident than in the Congress 'strongholds' of Amethi and Raebareli -- districts that are still described as the Nehru-Gandhi family bastion, even though neither the Amethi nor Raebareli assembly seat has a sitting Congress MLA.

Interestingly, Amethi and Raebareli districts were a major bone of contention in the SP-Congress alliance, with the Samajwadi finally agreeing to hand over eight of 10 seats in the two districts to the Congress party. The Amethi assembly seat, however, continued to be a thorn in the side of the alliance, with both the Samajwadi and Congress party fielding their candidates in what the two parties describe as a “friendly fight” -- but observers may rightly dismiss the term as a misnomer.

The Samajwadi candidate for Amethi is a powerful cabinet minister, who is also currently the sitting MLA. Standing against him is the Congress’ Amita Sinh, second and current wife of the raja of Amethi, Sanjay Sinh. The BJP has fielded the raja’s first wife, Garima Singh, who is campaigning on the tenets of justice -- as Sanjay Sinh left Garima after Amita’s husband, a national level badminton player, was killed on court. Sanjay and Amita Sinh were both charged with conspiracy to commit murder, but the charges didn’t stick. Dramatic as the backstory may be, it’s as we travelled into Amethi and spoke to the people, party workers and candidates, that an even more complicated narrative began to emerge.

On entering Amethi, we notice a convoy of cars with the Samajwadi flag parked toward the side. As luck would have it, the Samajwadi candidate, Gayatri Prasad Prajapati, is holding a small meeting in the village off the main road. Prajapati is confident of a victory. “I had defeated both the BJP and the Congress last time. I will win again; they will lose again,” he tells us. “The BJP doesn’t have a chance,” Prajapati says. “Their candidate lost their deposit last time. This time, there’s the added problem of demonetisation. They are not even in the picture.” 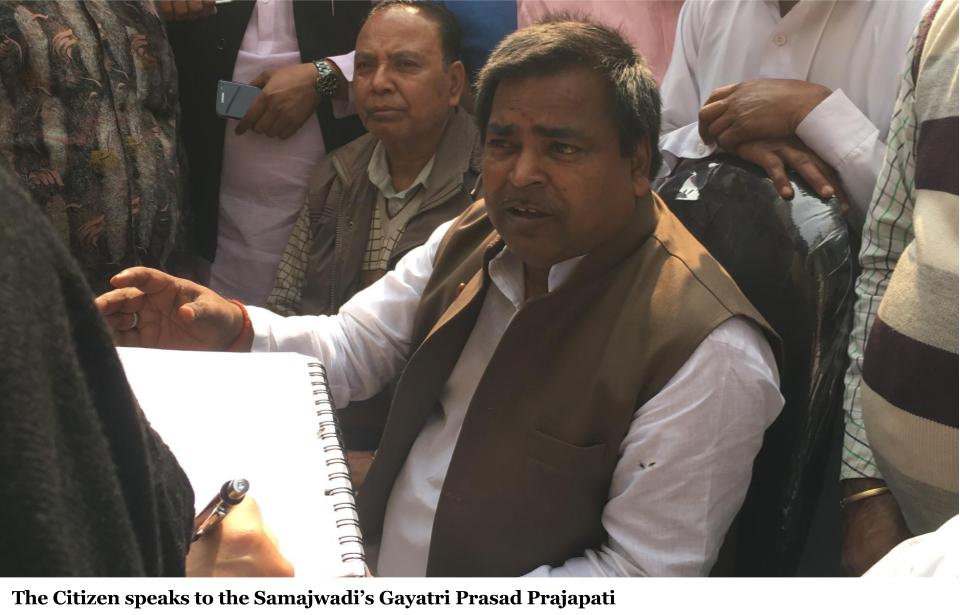 The minister then attacks the Congress party, saying that “the Congress has not performed. They did nothing for this area. I and Akhilesh Yadav have done a lot of work. People have electricity, they have roads, they can finally move around.” He moves on to criticising both Amita Sinh and Garima Singh, saying that the family feud in the so-called royal family has come in the way of the development of the area.

Prajapati’s language and tone belie any pretence of a “friendly fight” and our questions regarding why the alliance is fielding both SP and Congress candidates in Amethi are answered as we dig a little deeper. Locals tell us that Prajapati was a key figure in the recent Samajwadi family drama, as Akhilesh Yadav’s attempt to sideline him was countered by Mulayam Singh Yadav’s insistence that Prajapati remain in the thick of it. After charges of corruption piled up against Prajapati, Akhilesh Yadav moved to sack him from the cabinet-- being countered by a furious Mulayam who quickly restored Prajapati and began sacking ministers close to the young CM. “Mulayam refused to accept the alliance till Prajapati’s place in it was assured,” a local party worker tells us.

Prajapati, we find out, is rumoured to be the financier of Mulayam’s second and current wife, Sadhana. “The purple Lamborghini that Prateek Yadav [Sadhana’s son and Akhilesh Yadav’s half brother] drives around is supposedly a gift from Prajapati,” the party worker says. Prateek Yadav and his 5 crore luxury car have been the target of an attack from several quarters, with the BJP especially vocal in its criticism, often contrasting the SP party symbol of a cycle with the glitzy Lamborghini.

Locals tell us that Prajapati has amassed a fortune as the mining minister of Uttar Pradesh. With the money and power have come accusations of corruption, and most recently, rape. Hours after we interviewed Prajapati, the Supreme Court issued a directive to the UP Police to file an FIR charging the SP minister with gangrape. Since then, Prajapati has been under the radar, even missing from Akhilesh Yadav’s rally in Amethi.

From Prajapati we move on to Garima Singh, who is holding a meeting in another part of the district. “You know the injustice that was done to me; now let me serve you,” Garima begins. Sanjay Sinh had left Garima after the death of Syed Modi, a badminton player who was shot dead in Lucknow in 1988; at the time Modi was married to a pregnant Amita. Sanjay then married Amita, and the two were charged with conspiracy to commit murder. The charges were later dropped. Although Sanjay Sinh considers Amita his legally wedded wife, Garima Singh has contested the marriage. The family feud has been the cause of violence between the supporters of both camps -- representing a divided district. 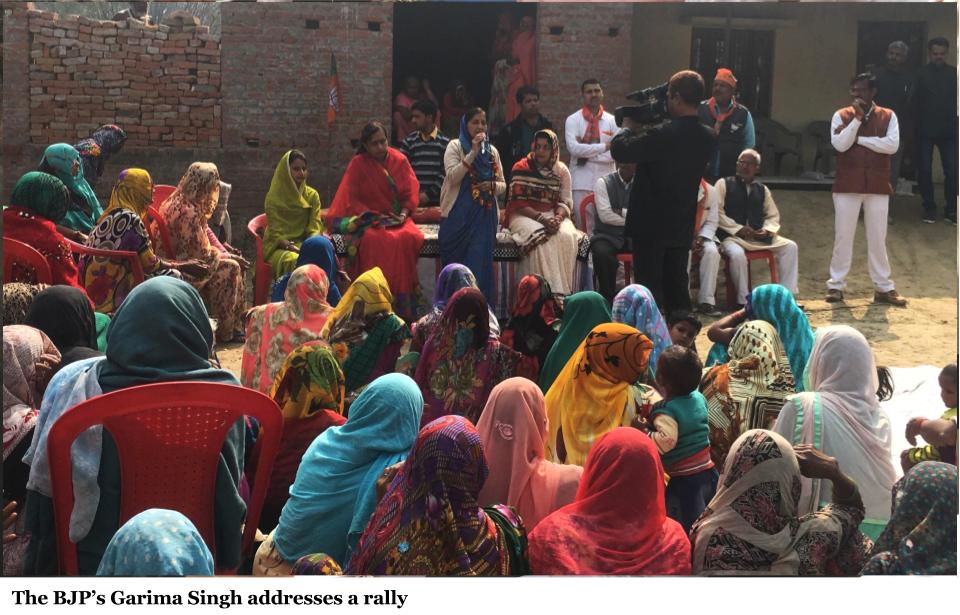 We speak to Garima Singh about her political ambitions, and ask her why she’s entered politics over 25 years after the incident. “My children were young,” Garima tells us. “I had no one to depend on, no one’s shoulder to hold… Now they are adults, and I have their support.”

From here, we move to the Congress party office, where Sanjay Sinh is addressing a meeting. We briefly meet Amita, who seems a bit flustered because someone has been murdered in a nearby village. At the office, we speak to Congress party workers, most of whom say that Amethi is a three way fight between the SP, Congress and BJP. The reality, however, may be that the decision to field both candidates in Amethi in a so-called “friendly fight” might just have given the BJP a chance it wouldn’t otherwise have had.

From Amethi we move to Raebareli -- another so-called Congress party bastion. Interestingly, despite the perception that this is a Congress seat, the sitting MLA Akhilesh Singh -- who has won this seat since 1993 -- contested on a Peace Party of India ticket in 2012, and as an independent in 2007. The three elections before that had been on a Congress party ticket.

Akhilesh Singh is not contesting this election, with his daughter, Aditi, being propped up instead. Aditi is a first timer, standing on a Congress ticket. We stop at the Congress office in the area and ask why Akhilesh Singh isn’t contesting. “He’s not well,” the workers tell us. Later we find out that Singh was suspended from the Congress party for six years, and although he remains very influential and powerful in Raebareli, locals describe his daughter as a “dummy candidate” -- a description that makes sense when you see Aditi dressed in a green chiffon saree, giggling her way through a Congress party rally in Raebareli.

Rahul Gandhi and Priyanka Gandhi both arrive in Raebareli to campaign for her, and although the rally is well attended, the enthusiasm amongst the crowd seems to be lacking. Perhaps this is because of an element of anger directed toward the Congress party -- which calls Raebareli its own -- but has, in the people’s eyes, failed to do enough for the district. “There is a lot of love for the Congress in the hearts of the people of Raebareli,” says Azad Rahmad, who has jumped into our car as we make our way to the Congress rally. “But you can see for yourselves what state Raebareli is in -- there’s no development whatsoever.” 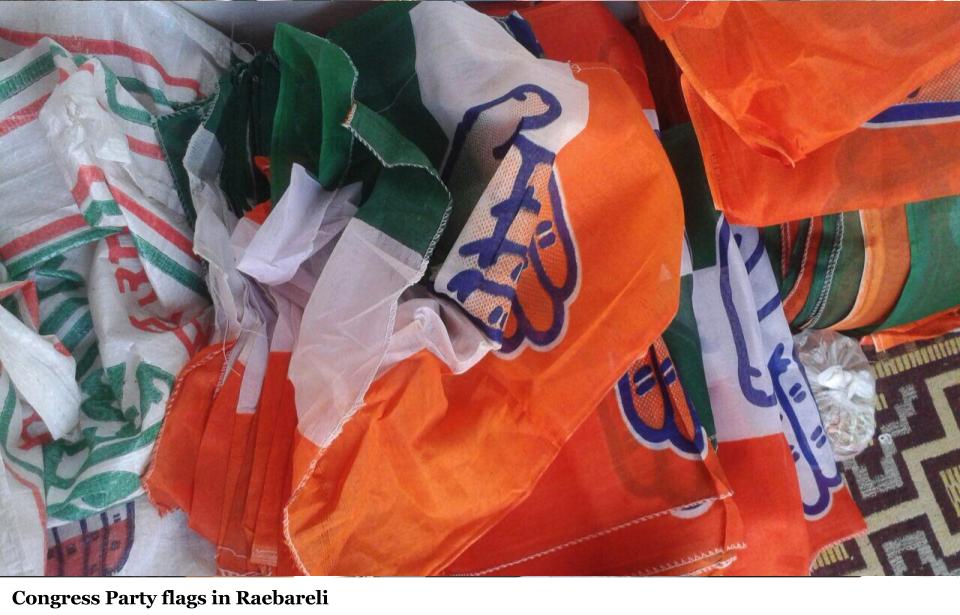 Azad maintains that he will continue to support the Congress, but openly praises Mohammad Shahbaz -- a new entrant into politics, fielded by Mayawati. Shahbaz represents two firsts: he is the first Muslim candidate in Raebareli, and this is the first time that Akhilesh Singh (who is seen as the face behind his daughter’s candidature) is being challenged in this seat.

We meet with Shahbaz’s elder brother, Mohammad Shanawaz Khan, who describes himself as the BSP candidate’s “guarantor” and is clearly the political strategist. He is fairly confident of a victory, saying that the Congress has shot itself in the foot by fielding Akhilesh Singh’s daughter. “There is an anti-Akhilesh Singh vote this election,” Khan says, and may perhaps be right as Singh’s margin of victory has been declining in the recent polls. Khan is clearly confident that in addition to the area’s 98-99,000 Dalits, its 55,000 or so Muslims will too back the BSP candidate. When asked whether Muslims will vote for Mayawati when there is fear of a post-poll BSP-BJP alliance, Khan dismisses the possibility of any such eventuality. “There will not be any alliance between the BSP and BJP,” he says, adding that Mayawati herself is working on contradicting the claim by assuring the voter that she rather sit in the opposition than ally with the BJP.

“We are confident of a victory,” Khan says. “If the Congress had fielded someone other than Akhilesh Singh’s family, or if the Samajwadi were contesting here instead, things might have been different.”

As we finish our tea and begin the long drive back to Lucknow, we can’t help but wonder whether the Congress made a strategic mistake in both its so-called strongholds -- Amethi and Raebareli.