China Given A Thumbs Down: "Tibet" Flags Flutter Across Tawang As Dalai Lama Visits

TAWANG: Amidst the hue and cry of Chinese protests over the Dalai Lama’s visit to Tawang in Arunachal Pradesh that starts today, the alpine town near the international border has taken on a colourful look with flags of different kinds- including the Tibetan Flag- fluttering about.

After weather conditions delayed the Tibetan religious leader’s scheduled visit to Tawang, the itinerary was changed and he travelled by road to Bomdila and Dirang where he held discourses. He will now arrive at Tawang on Friday.

His visit though, has been shrouded in voices of protests emanating from the People’s Republic of China. Chinese officials and media have gone so far as to claim that India isplaying the ‘Tibet card’ and that the move to invite someone thatChina sees as a separatist leader could ruin bilateral relations between the two countries.

A Chinese official mouthpiece in an op-ed recently dismissed India’s assertions that the Dalai Lama’s visit is purely religious, stating that “the Dalai Lama has long been active in anti-China separatistactivities under the guise of religion. New Delhi inviting the Dalai Lama to sensitive region gravely damages the China-India relationship”. 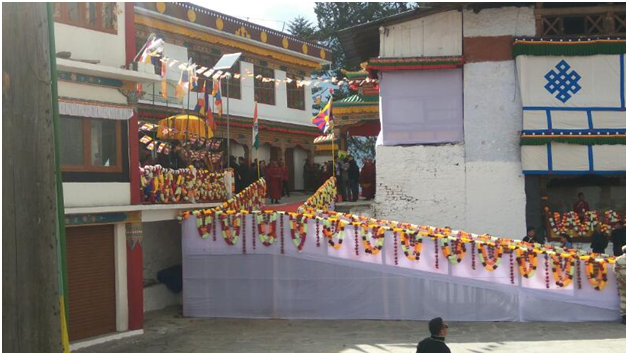 India on the other hand has stood its ground stating that it respects the ‘One-China’ policy which includes the Tibetan Autonomous Region but that it should refrain from commenting on India’s internal matters.

While Tawang district is almost entirely populated by the Buddhist Monpa tribe, the eponymous district headquarter town is home to the largest monastery in the world, second only to the one in Potala Palace in Tibet’s capital Lhasa. And while people in the Mon area are looking forward to seeing him there are clear political undertones that mark his every visit to the state.

China’s claims over large parts of the state stems from the fact that it considers it to be part of what it calls ‘South Tibet’ and that since Tibet is part of China, so is the region. While India has in the past agreed to recognise Tibet as part of China, hosting the Dalai Lama in the state has drawn criticism from the Chinese as well as certain sections of people from Arunachal Pradesh.

Critics and political commentators in the state feel that by repeatedly inviting the Dalai Lama, India is pricking an already rocky relationship between the two countries. Many in Arunachal Pradesh say that the state and people will gain nothing from his visits- this being his eighth, the last one in 2009.

The Indian government’s approach too seems to be sending out mixed signals since on the one hand it agrees to China’s claim over Tibet and supports the Dalai Lama’s call for greater autonomy within Tibet (and not complete freedom), official sources said that his visit is being managed by the Ministry of External Affairs.

Parts of Tawang have also been adorned with the ‘Tibetan flag’ called the "snow lion flag". Although its exact usage is disputed, since the 1959 Tibetan Rebellion the flag has become a symbol of the Tibetan freedom movement, adorning walls and windows of homes of the Tibetan Diaspora spread across the globe. The flag is banned in mainland China. Its presence in a region that China claims is disputed is only bound to add to its ire.

How China reacts from here onward remains to be seen. For now though, the flags flutter.