The Silent Sufferers, Caught Between the War Games of India-Pakistan

The Silent Sufferers, Caught Between the War Games of India-Pakistan

NANGA, JAMMU AND KASHMIR: Jammu and Kashmir has a number of villages along the LoC, hardly 1 km away, in Jammu, Kashmir and Ladakh sector. The inhabitants of these village have been bearing the brunt of India Pakistan rivalry but remain out of the headlines even as war games continue.

One such village is Nanga in Vijaypur district in Jammu and Kashmir. Vijaypur is about 50 kilometres away from the winter capital Jammu, and Nanga is a remote village near the border in Vijaypur.

The inhabitants of this village are mostly Sikhs (with a small population of Dogri speaking Hindus) who migrated from West Pakistan after 1947 (specifically from around the Chamba Jaurian Sector ). They were allocated land in Nanga by the then govrnment, that included residential and plots for farming. Agriculture thus, is the biggest income source for these families, with employment in the Indian Army being the other at second place.

“We are thankful to the then government for providing us with the land and recognition, but where did they shift us? From one hell to another. We left our homes in Pakistan , where our liveswere in danger, for yet another dangerous area. Just 1km from the border.” Says Bir Kaur recalling her times in Pakistan. 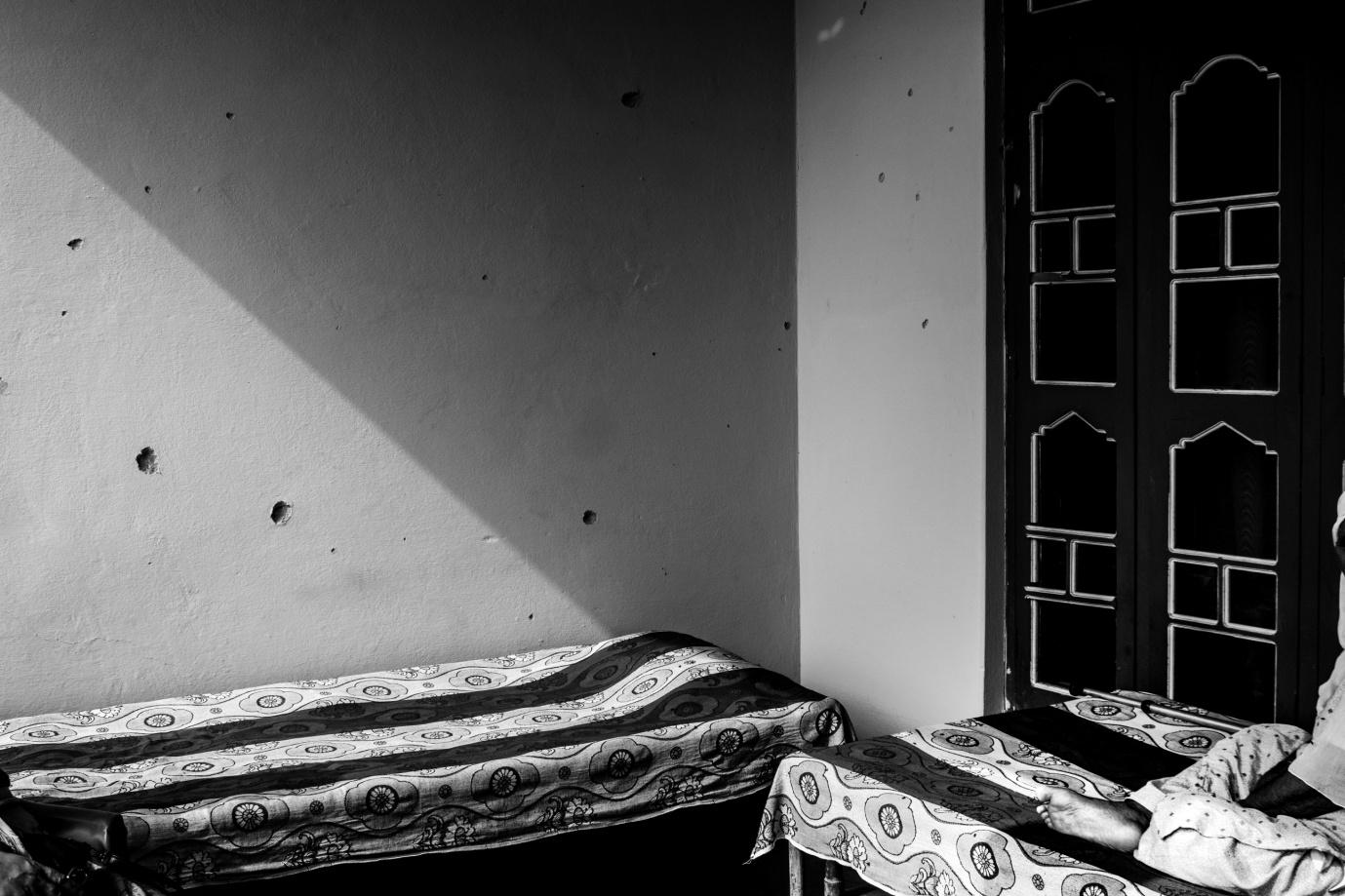 The walls of Bir Kaur’s verandah destroyed by shells during a cross border firing on 22nd September 2017. 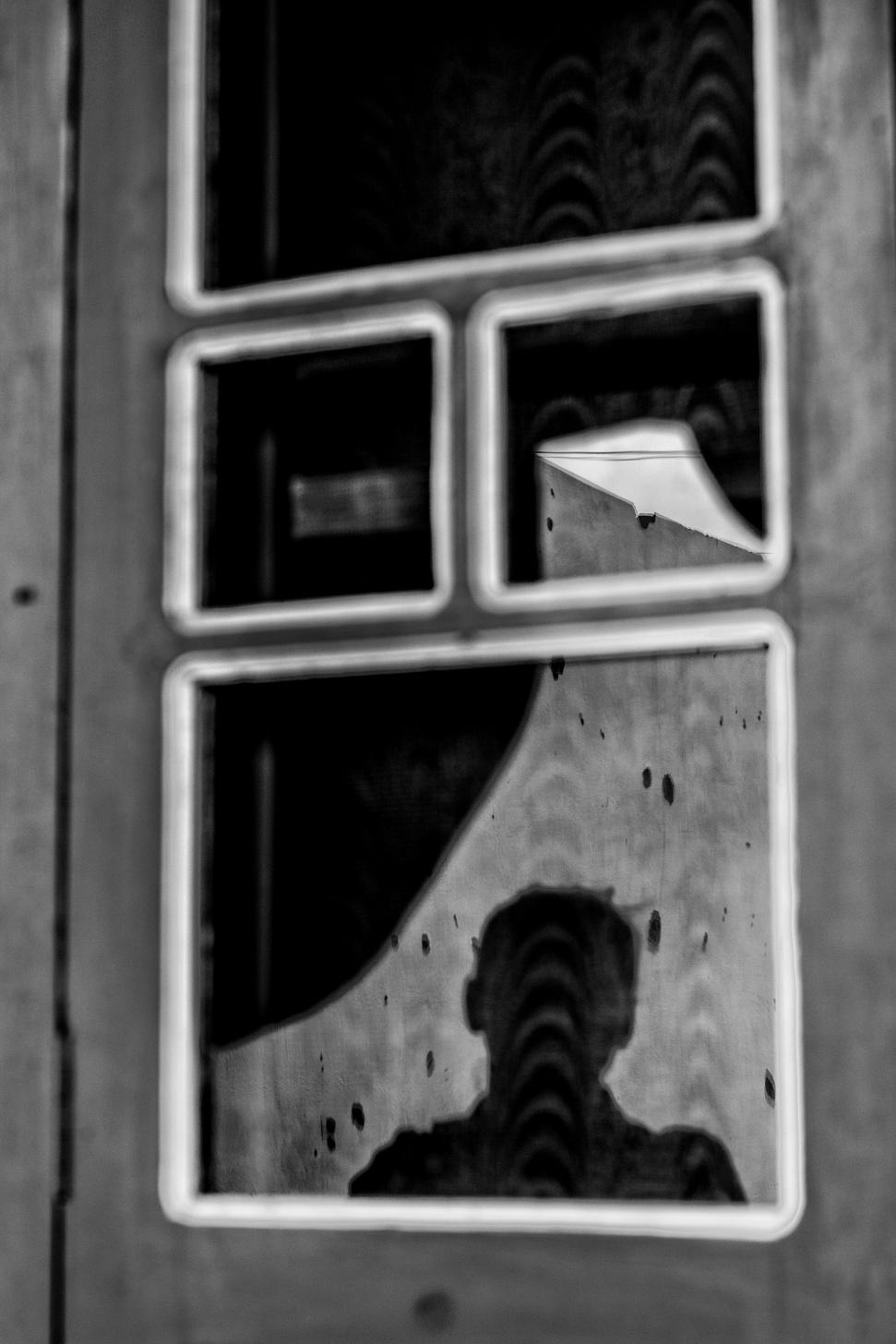 Bir Kaur’s grand daughter Amandeep, a graduate in Economics, recalls how various local journalists visited their house the morning after the shelling. But no representatives of the Army or the government have visited the village, with no question of compensation. 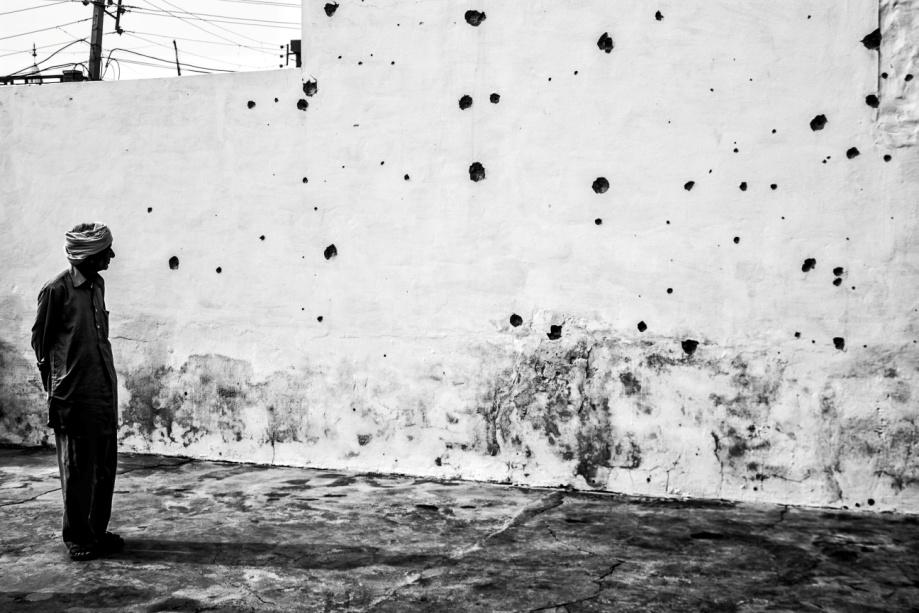 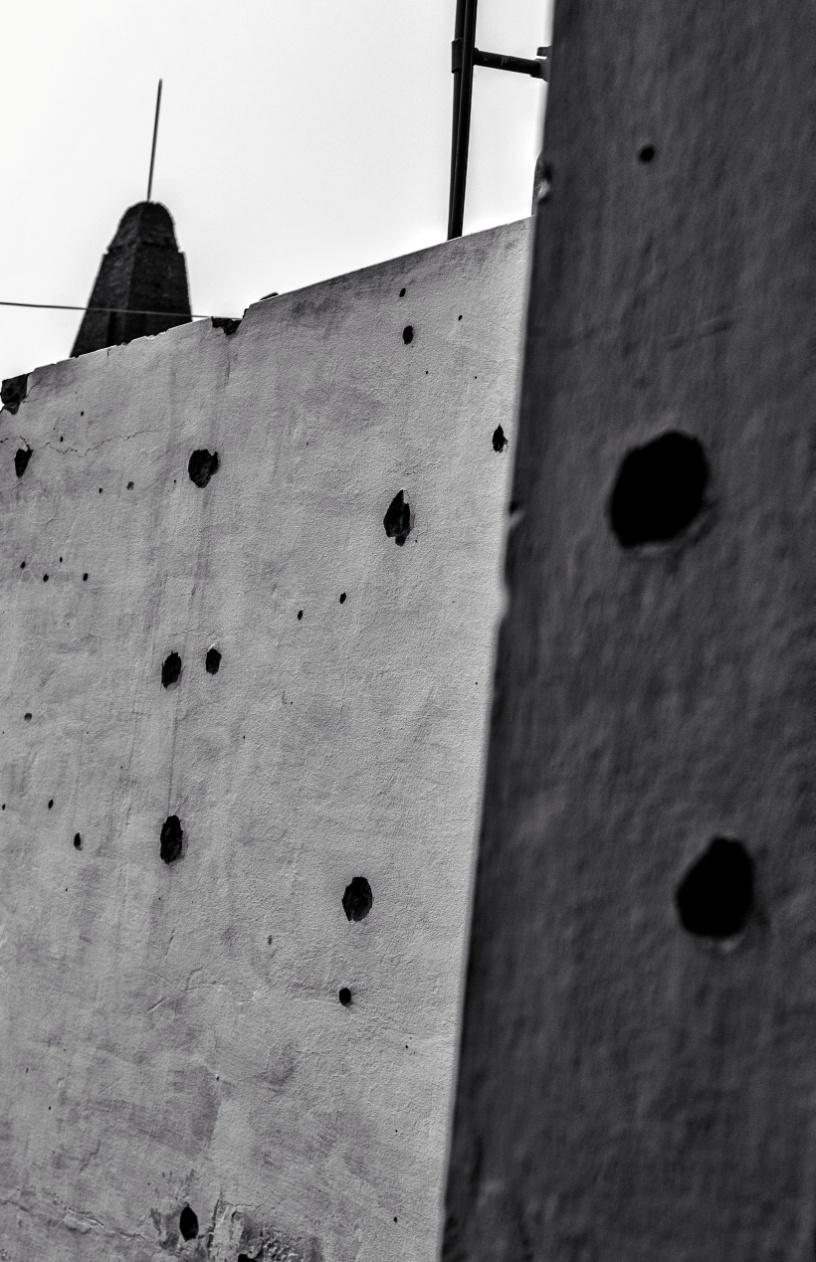 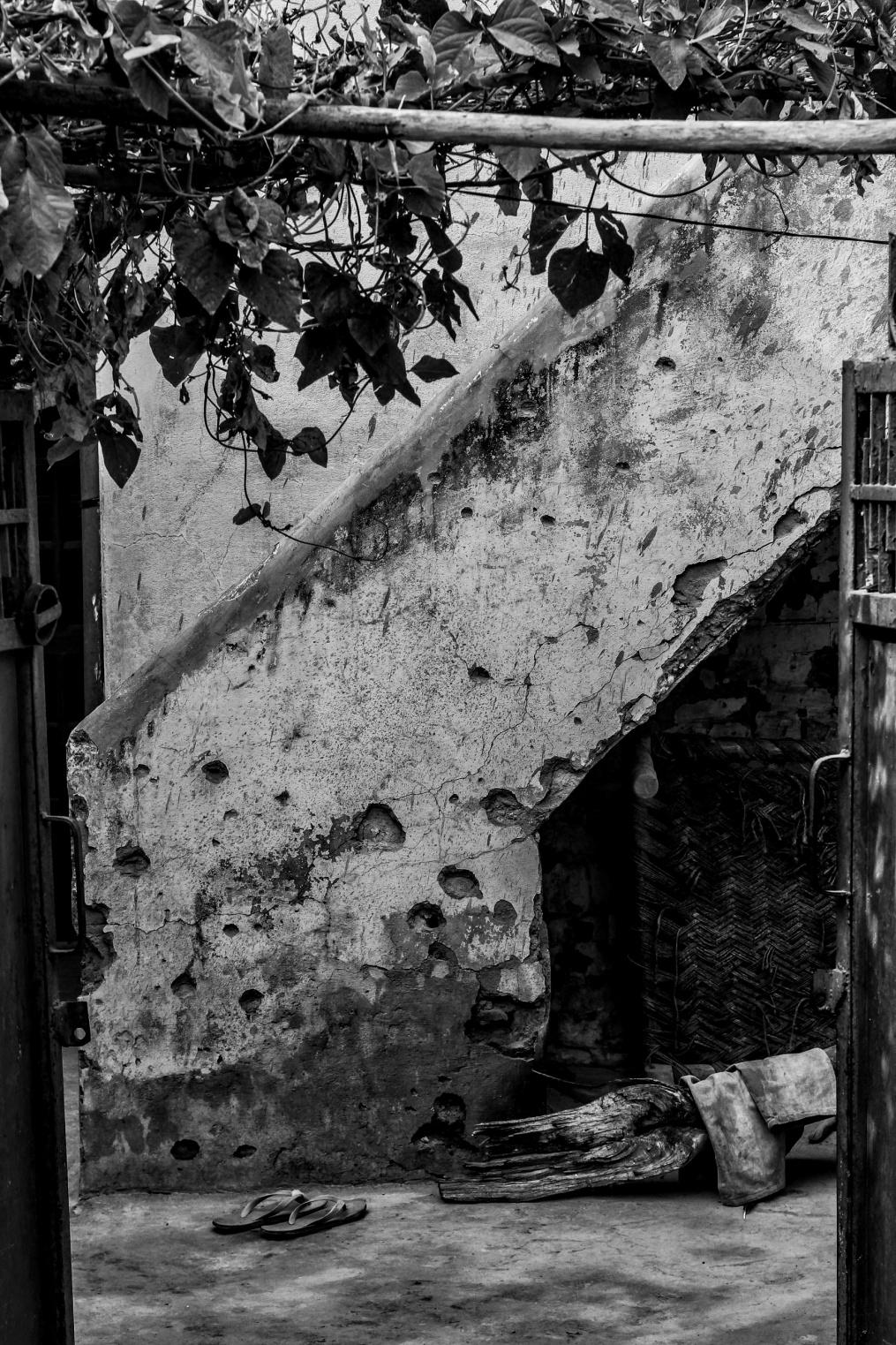 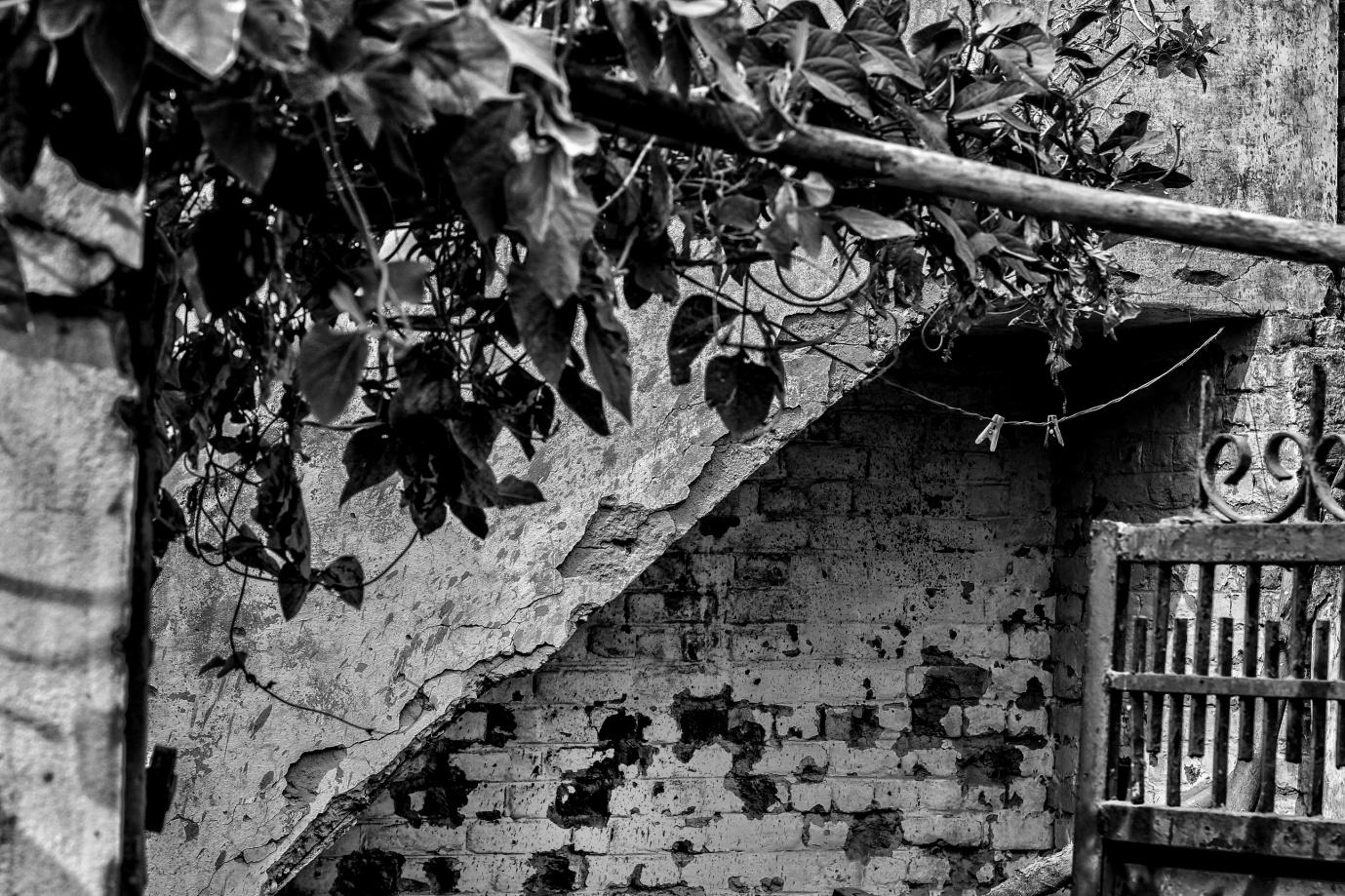 The residence of Parsnath, a resident of Nanga Village, whose house was hit by the shells from the border. “Fortunately, only one of his outer walls was destroyed.” says,Somnath his neighbour. “Other houses have been hit worse.” The threshold of devastation of these villagers is so high that they are grateful and thankful that no human lives were compromised. 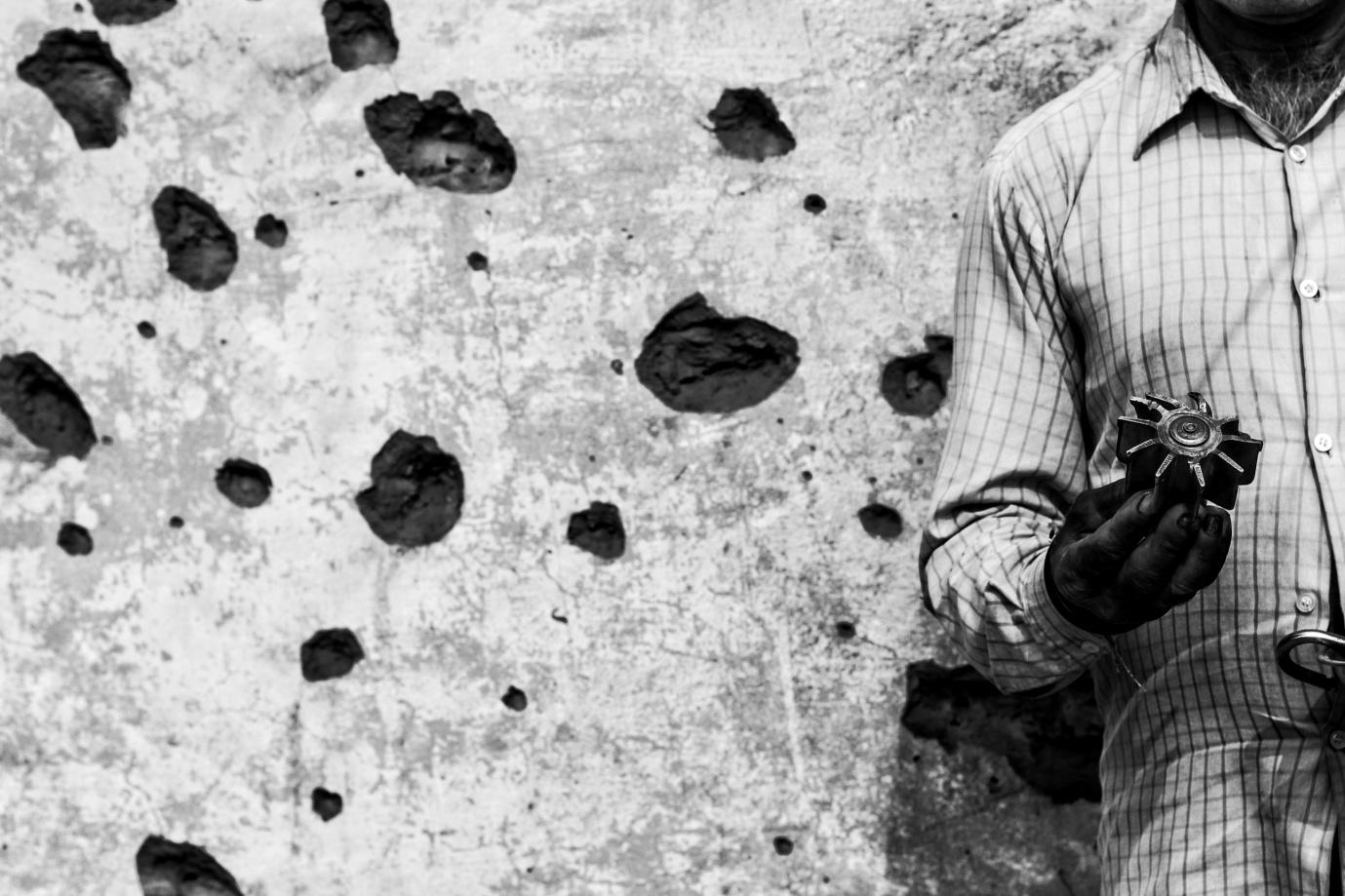 Ashok Kumar showing the shell that hit his house. “This is just an ongoing thing for us. Every day we live in a fear of yet another shelling across the border. I have been thinking of repairing my walls but what is the use.” Ashok Kumar,s family was not at home when the shelling happened, at 1 am, otherwise there might have been some causalities as the shells reached right inside the main room of the house. 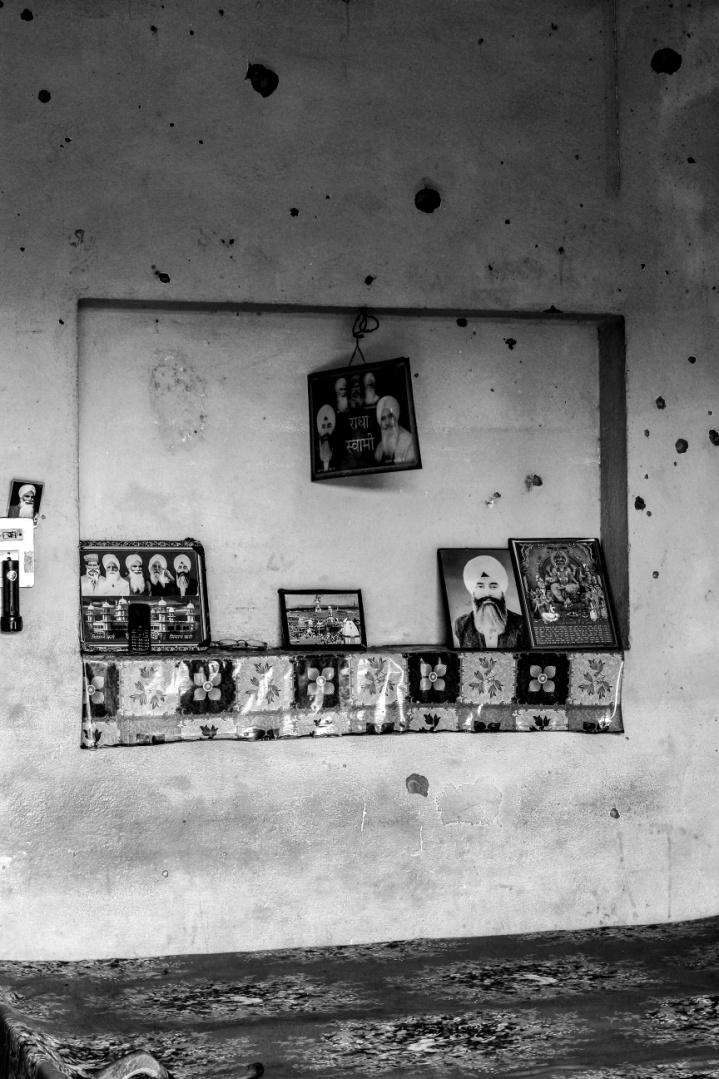 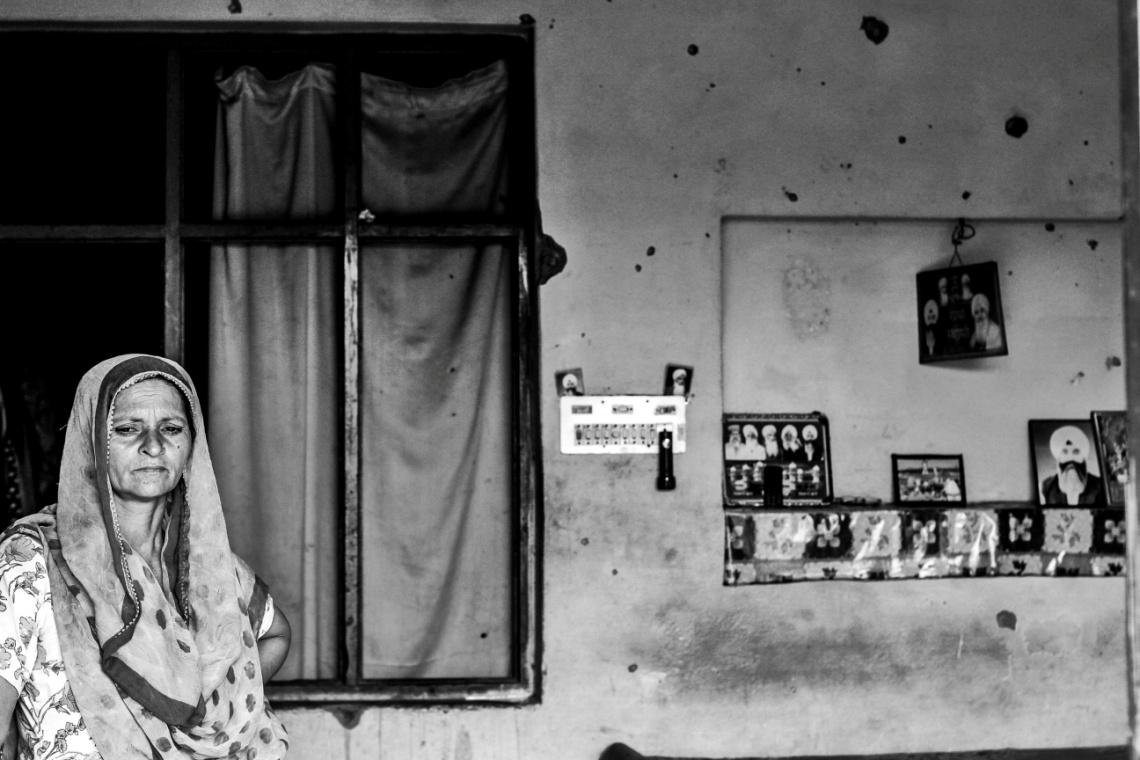 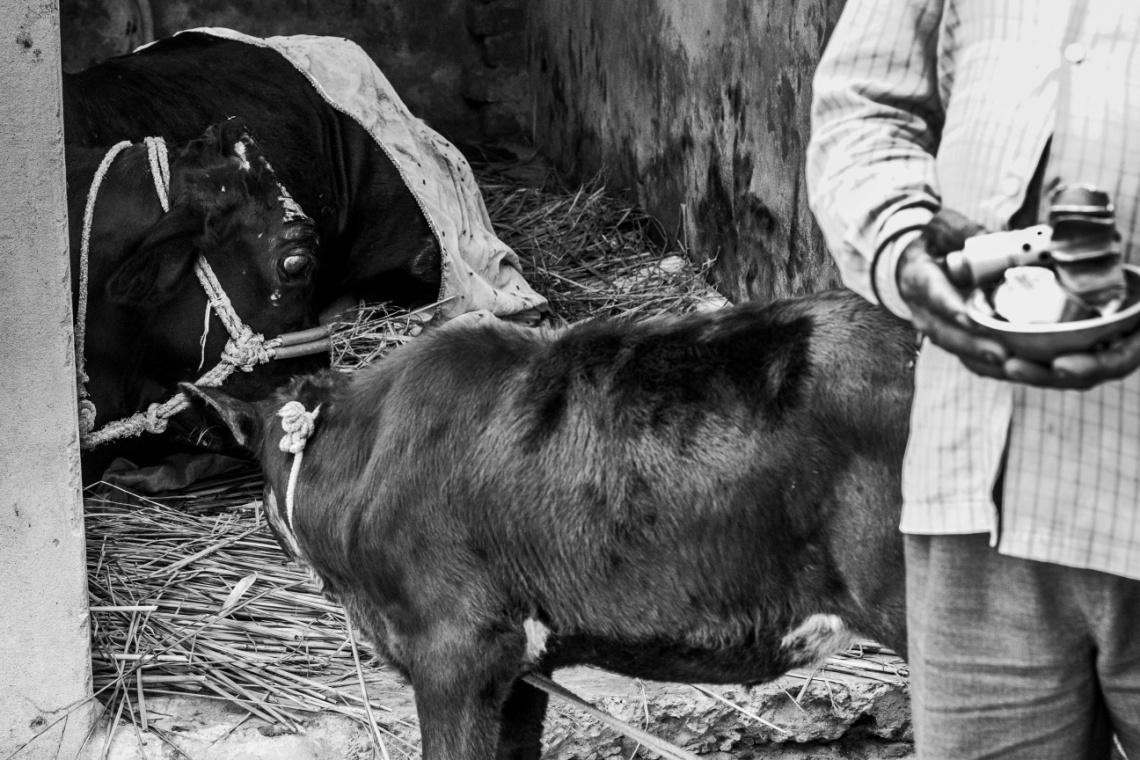 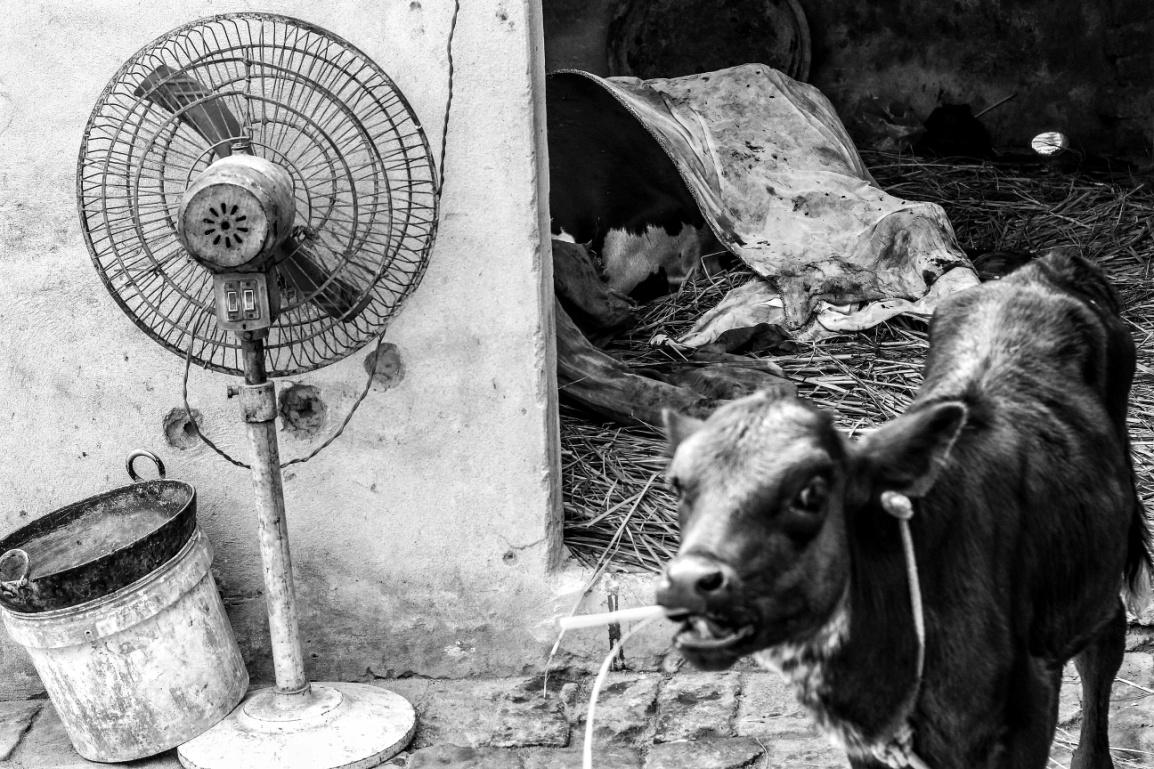 Apart from the Apart from the damage done to his house, Ashok Kumar lost one cow to this shelling and another one was injured severely. “The value of these cows now must be of around 40,000 rupees.” Financial loss on one side, and the pain that the animals have to experience on the other. The condition of that particular cow is severe and will die anytime, apart from this, the environmental loss that the village has to pay is also one concern.

The cow inside the shed is being locally treated by Ashok Kumar. 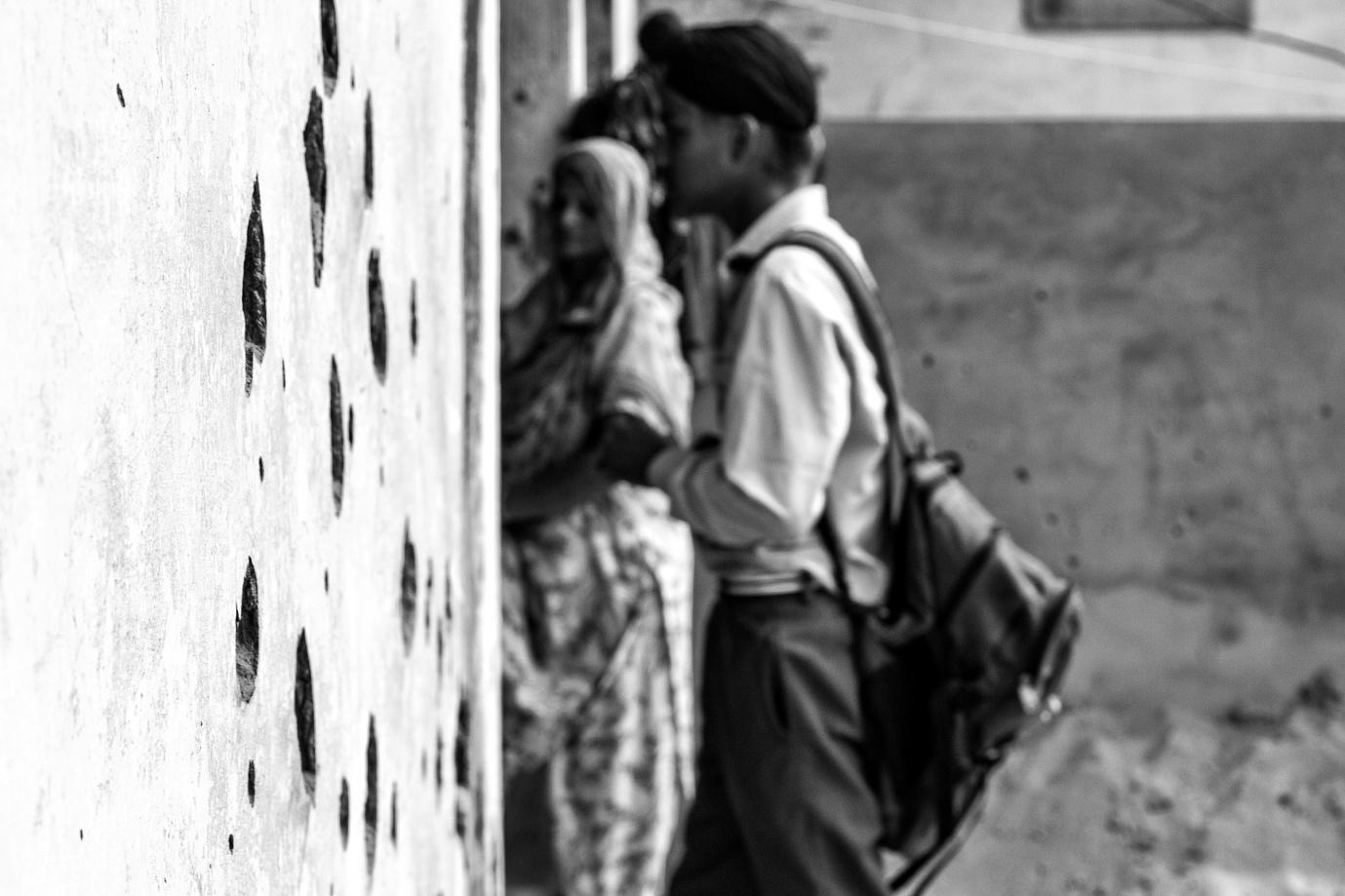 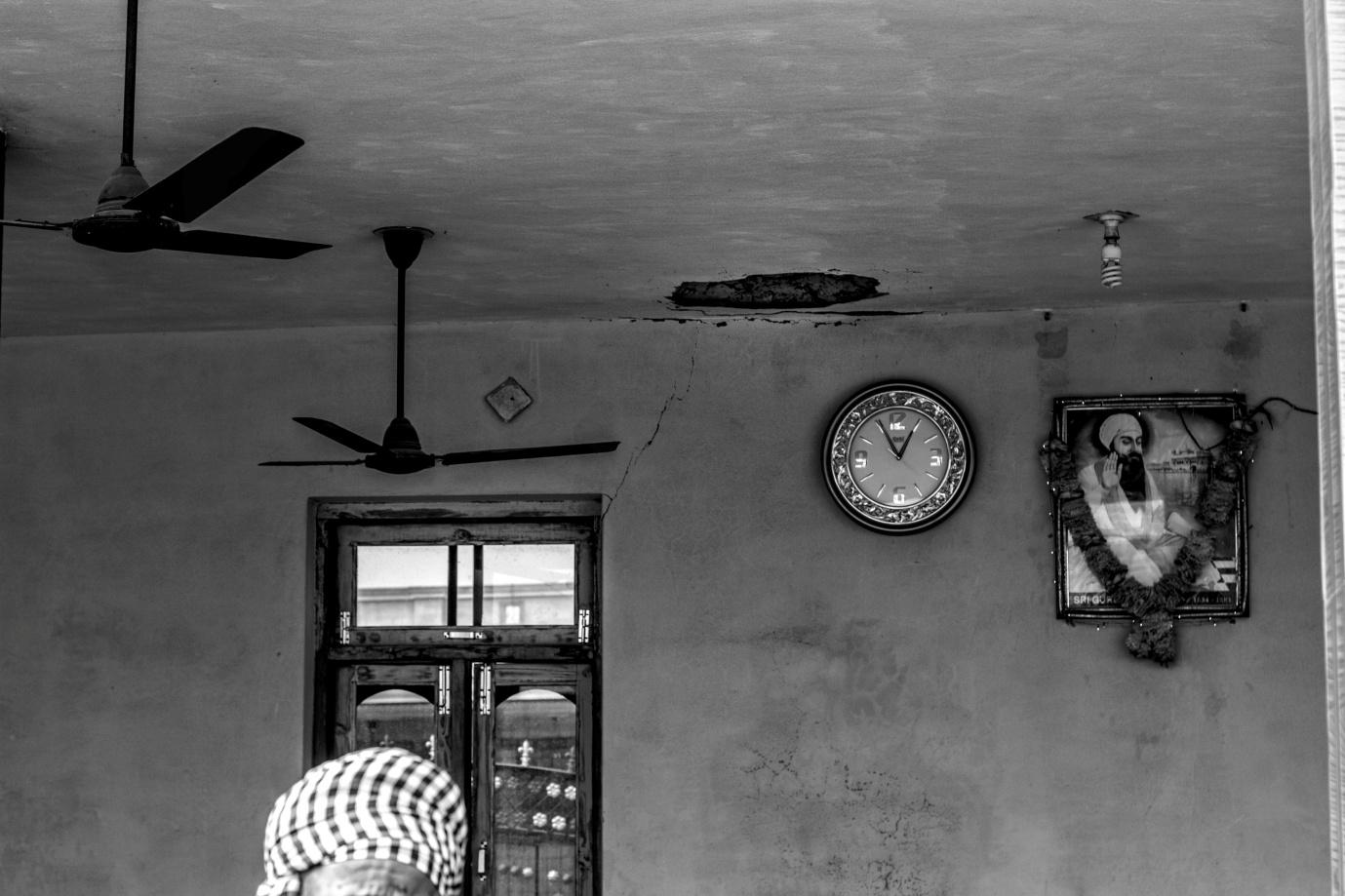 One of the shells also hit inside the village Gurudwara compound due to which the whole wall has a big crack now. It is being repaired through the Gurudwara Fund. 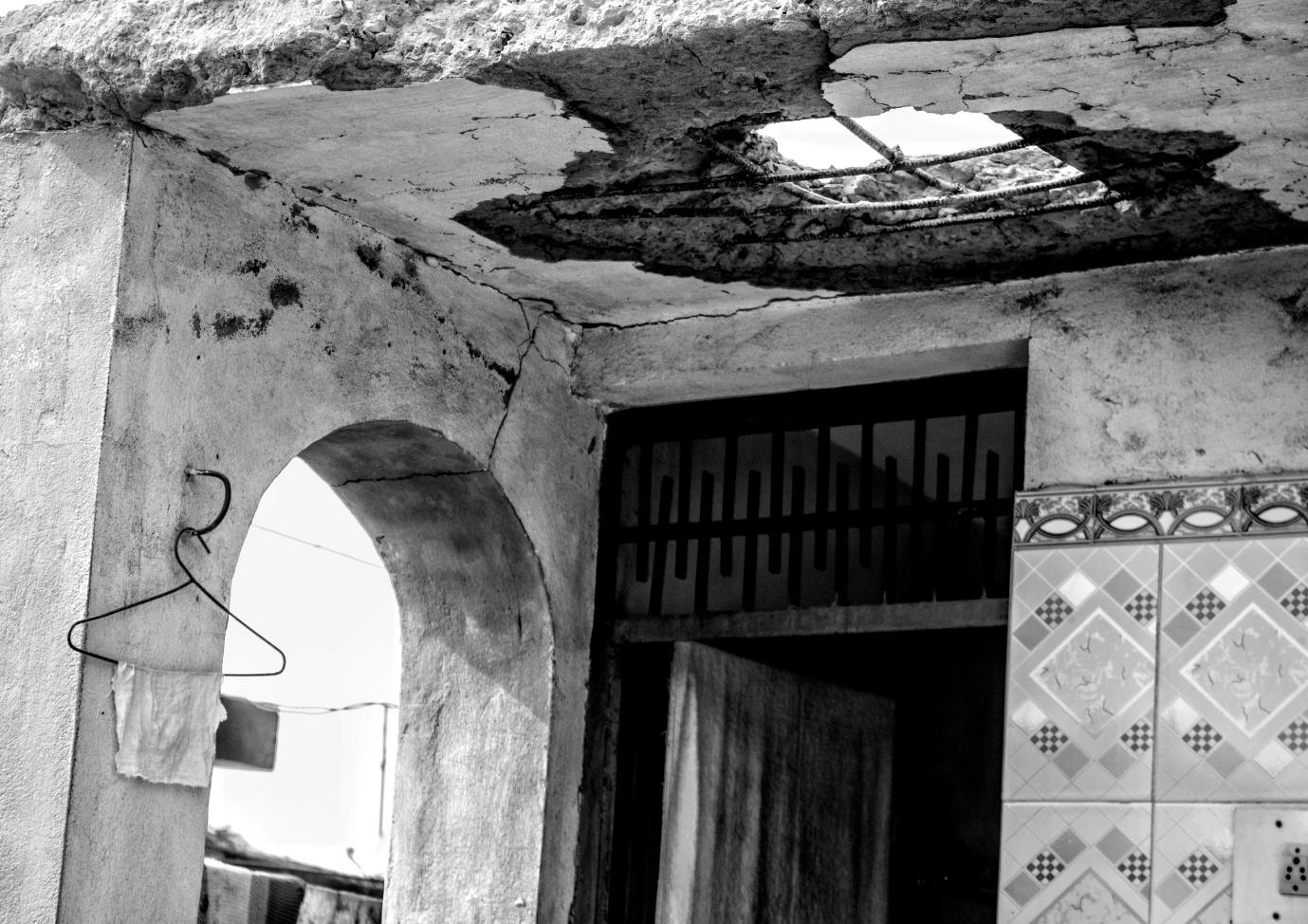 The ceiling of yet another resident’s washing area was hit. Jasvinder recalls how her father called her at night saying that neighbouring houses were being hit by shells, when this one came through their ceiling. 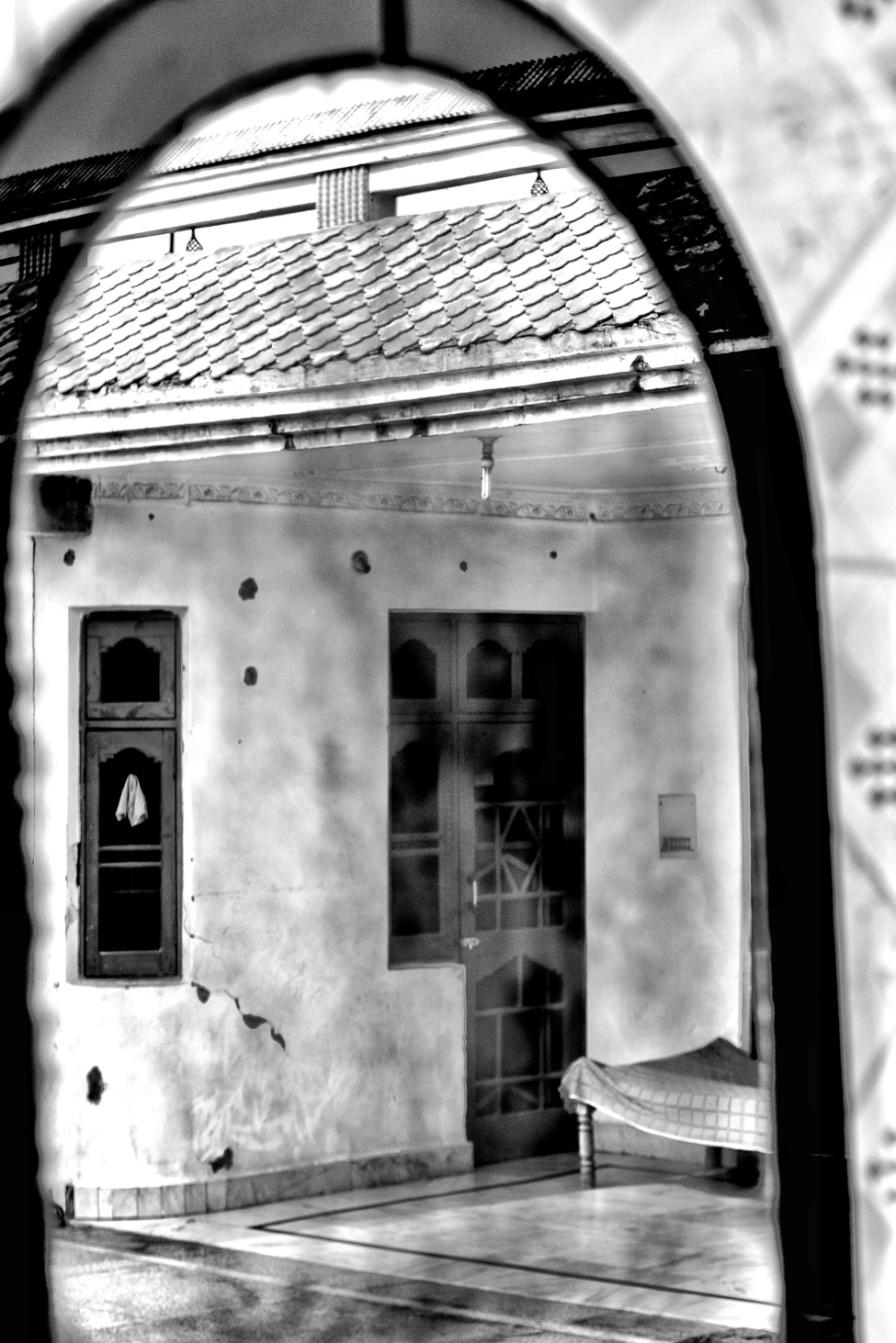 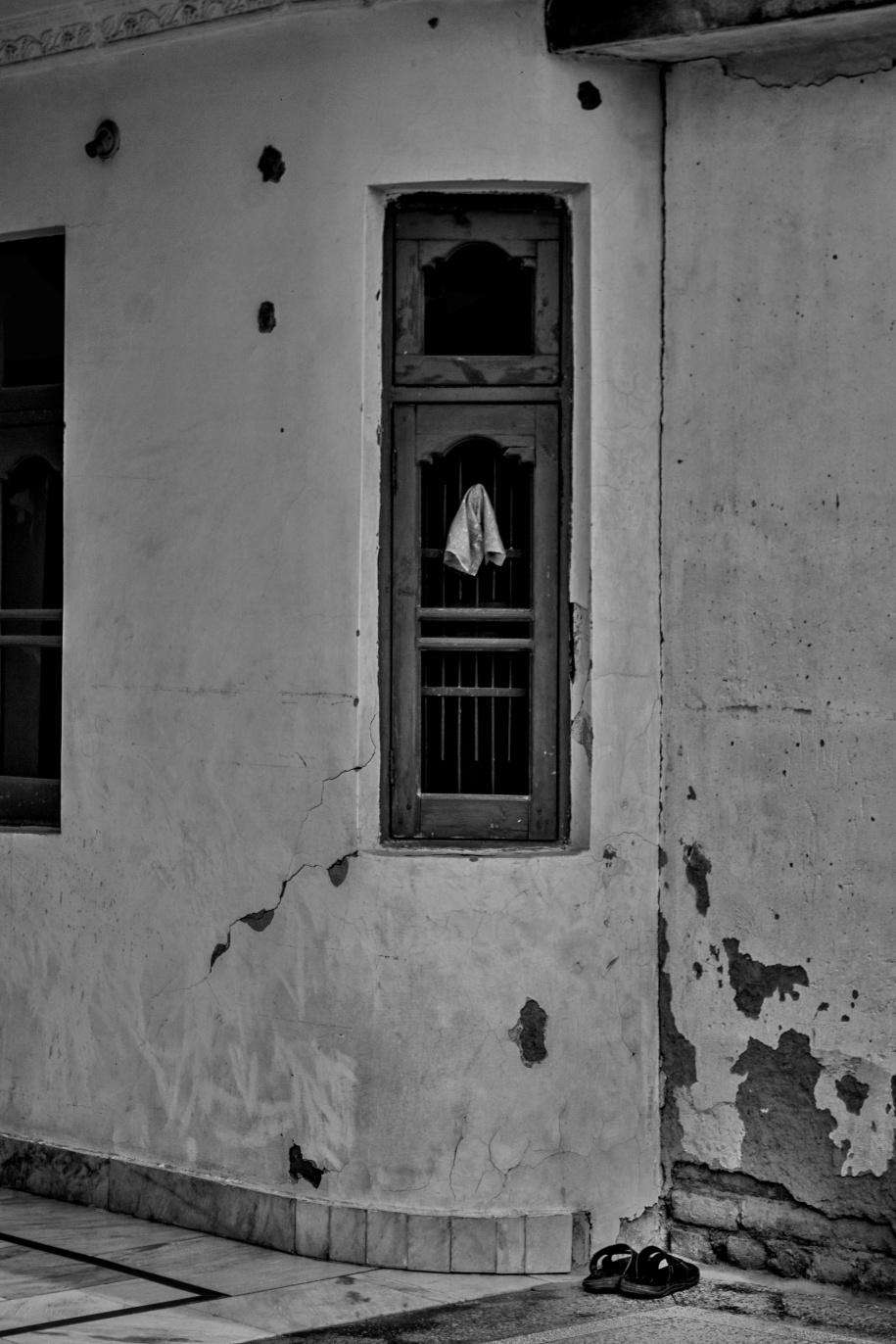 “This is our everyday life. We are used to it now, it is normal for us.” says Jasvinder. “We do not want to leave this village, my family has been living here since 1947, moreover we have our agricultural lands here and we work on them ourselves. This is our home. We just pray every day that peace prevails between these two countries and we live in peace, for once. ”

Nanga is just one of the many villages where the residents have to face the brunt of this never ending war. Others have not been as fortunate as Nanga, suffering loss of life as well. Nanga is at the centre with the borders surrounding it from all four sides, and the villagers for whom this is home, live in constant dread of death and destruction.