'No Road, No Vote' Gathers Momentum in Arunachal

Ranju Dodum on villagers in Arunachal who have found a new weapon.

ITANAGAR: Villagers in Arunachal Pradesh have found a new weapon to make their voices heard after being ignored for decades by refusing to take part in the electoral process.

Back in 2014, residents of Sissen village in what is now Siang district refused to participate in the state and general elections demanding that their village be connected by a road to the state highway. Those wanting to visit the village have to drive for three hours from the town of Pasighat and cross a bamboo bridge hanging over the turbulent Siang river below before trekking up a hill for one-and-a-half kilometres.

(All photographs MANOJ SINGH) Although their ‘No Road, No Vote’ stance failed to garner any substantial gain, it has inspired others to take to similar means of protest.

In May this year, the 140 residents of Jime village in West Siang district announced that they would be adopting the same ‘No Road, No Vote’ policy if a road is not built to their homes.

Villagers claim that the absence of a road and a healthcare facility has led to several delays in medical emergencies. They often have to carry patients on home-made stretchers to Zirdo, around six kilometres away, from where vehicles are able to ply.

More recently on November 18, residents from 24 villages from the Kangku administrative circle in Lower Siang district took part in a protest rally, threatening to boycott the as-yet-unannounced by-poll for the Likabali assembly constituency. The assembly seat was left vacant after health minister Jomde Kena died in September this year.

During the rally, Dajo Ngomle, the general secretary of a local NGO called Dolok Banggo, said that the villagers have been demanding a road for years but that successive governments have failed to do so.

The chairman of the NEFA Indigenous Human Right Organisation, Domin Loya, said that the administrative circle located in the foothills of the state bordering Assam faces “untold problems in the absence of proper roads”. 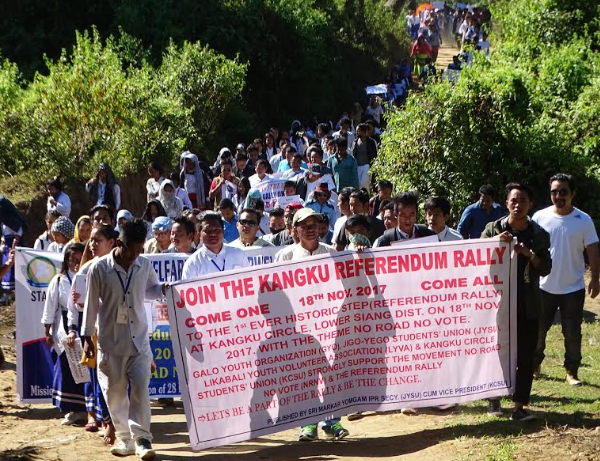 He said that development in the area has been hampered due to negligence and that proper connectivity and communication can change that.

Although Kangku borders the plains of neighbouring state of Assam, several villages in Arunachal Pradesh’s hilly terrain remain unconnected by pucca roads, making it difficult to drive to such villages. While VIP visits are made possible with the use of helicopters, residents of these villages have to trek to their homes carrying essential supplies.

While plans to build a ‘Hinterland Highway’ connecting the areas near the 1,680 km-long international border that the state shares with Bhutan, China and Myanmar has been mooted several times in recent years, those plans are yet to see any concrete development on the ground.

Security concerns and the ever looming Chinese threat over the state has meant that central ministers, government and Army officials often visit the border areas. In order to cut down travel time for security forces, several advance landing grounds have been established and there are plans to build more near the state’s border with China.

Construction plans for the ambitious 1,559 km Trans-Arunachal Highway that will connect the east-west corridors of the state have also been hit with several road bumps. While the state’s natural topography and long monsoon season acts an impediment, work on the four-lane project has also been hampered by delays in providing financial compensation to affected people.

On the one hand, affected people blame the government for delaying compensation payments, the successive governments have said that the quantum of compensation demands have skyrocketed over the years. In one stretch of the Trans-Arunachal Highway, the compensation claim jumped from Rs 48 crore to Rs 135 crore.

Several sources claim that many of such demands are a result of illegal constructions that were built along the right of way after the initial surveys were conducted by government agencies.