ITANAGAR: Naga political parties, both mainstream and the Naga National Political Groups (NNPGs), along with civil society organisations took a decision this evening not to contest the elections.

In a signed declaration the groups decided that they would give more time for the Naga peace process to reach its logical conclusion. And hence decided not to field candidates for the forthcoming Assembly elections, asking instead for the deferment of the polls. 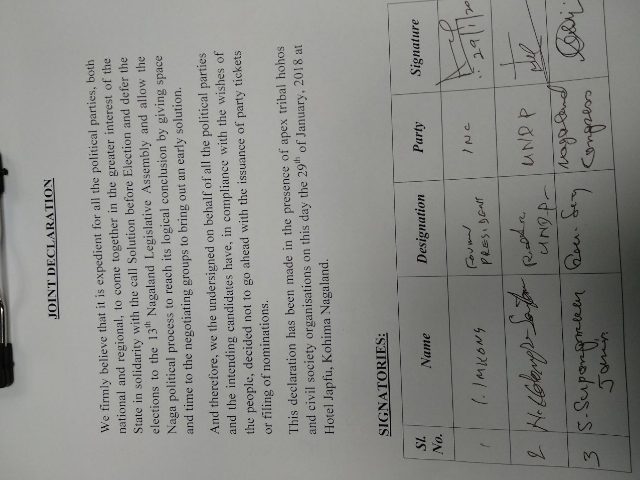 Details of the Agreement remain shrouded in mystery but some had speculated that it would be implemented in December and presented as a Christmas gift. That, however, has not happened and speculations from unofficial sources has led to confusion and conflict in neighbouring states.

Recently in Assam’s Dima Hasao district, violence broke out after groups protested a statement allegedly made by RSS activist Jagdamba Mall who claimed that the draft plan for the Framework Agreement includes the district in Nagaland or Greater Nagaland. The widespread protest led to the death of two demonstrators who fell to police firing.

While protests in Dima Hasao district continue, voices within Nagaland are demanding a solution to the decades-long demand for a separate country of Nagalim that would include ‘Naga’-inhabited areas of Nagaland, Arunachal Pradesh, Assam, Manipur, and Myanmar across the international border.

Political parties across Nagaland, including the ruling Naga People’s Front (NPF), have thrown their weight behind calls for a ‘Solution before Election’. Even the state units of national political parties such as the Aam Aadmi Party and the JD(U) have voiced their support.

On Sunday, the NSCN-IM and the six NNPGs warned against those trying to “sabotage the historical process of negotiations”.

A meeting was held at the commercial capital of Nagaland- Dimapur -on Sunday organised by the Core Committee of Nagaland Tribal Hohos and Civil Organisations (CCNTHCO).

A joint-statement issued by the NSCN-IM and the NNPG Working Committee following the meeting said: When Naga people as a whole have made the collective decision to forgo election, we caution vested interest and unscrupulous persons not to sabotage the historical processes of negotiations by filing nominations and indulging in election process.

During another meeting on January 25 at the NSCN-IM’s headquarter- Hebron – its Steering Committee convenor, Rh. Raising, said that elections are an “anti-thesis” to lasting solution.

He said that a choice must be made whether to choose solution or election. The NSCN-IM’s (and indeed of other NNPGs’) calls for implementation of the Agreement before election is seeped in the view that conducting elections will be an indirect acceptance of the Indian system by groups that have fought for freedom for Nagas for seventy years.