SRINAGAR: Perhaps for the first time, the Kashmiri Pandits and Muslims jointly protested against ‘excesses’ committed by Security Forces during CASO (Cordon and Search Operation) a few days ago in the Kashmir Valley.

A group of Kashmiri Muslims and Pandits came together on Thursday at Srinagar’s Pratap Park , carrying placards which read “Harassment Thy Name is CASO’, Harassment of Pandits, Muslims and Sikhs, We are One’.

The protesters criticised the government for giving a “free hand” to military personnel and allowing them to target civilians and damage public property during search operations. They said that they have joined together to raise their voice against the unabated harassment to the people of Kashmir.

“We are one and want to convey a message to the government that it should stop harassing people and vandalizing property during Cordon and Search Operations in Kashmir Valley,” said Amit Wancho, a Kashmiri Pandit.

“Both majority and minority communities have suffered since 1990s, we have been part of human tragedies since decades, we are here to share the pain collectively and will raise our voice collectively,” he told The Citizen.

“Whenever a youth gets killed in Kashmir, I can’t sleep that night, I feel the pain of my brethren,” said another protester Sushel Panju.

He said that they will raise their voice against atrocities. “We are Kashmiris first of all. We are united and want to tell government to act against the perpetrators,” he said . 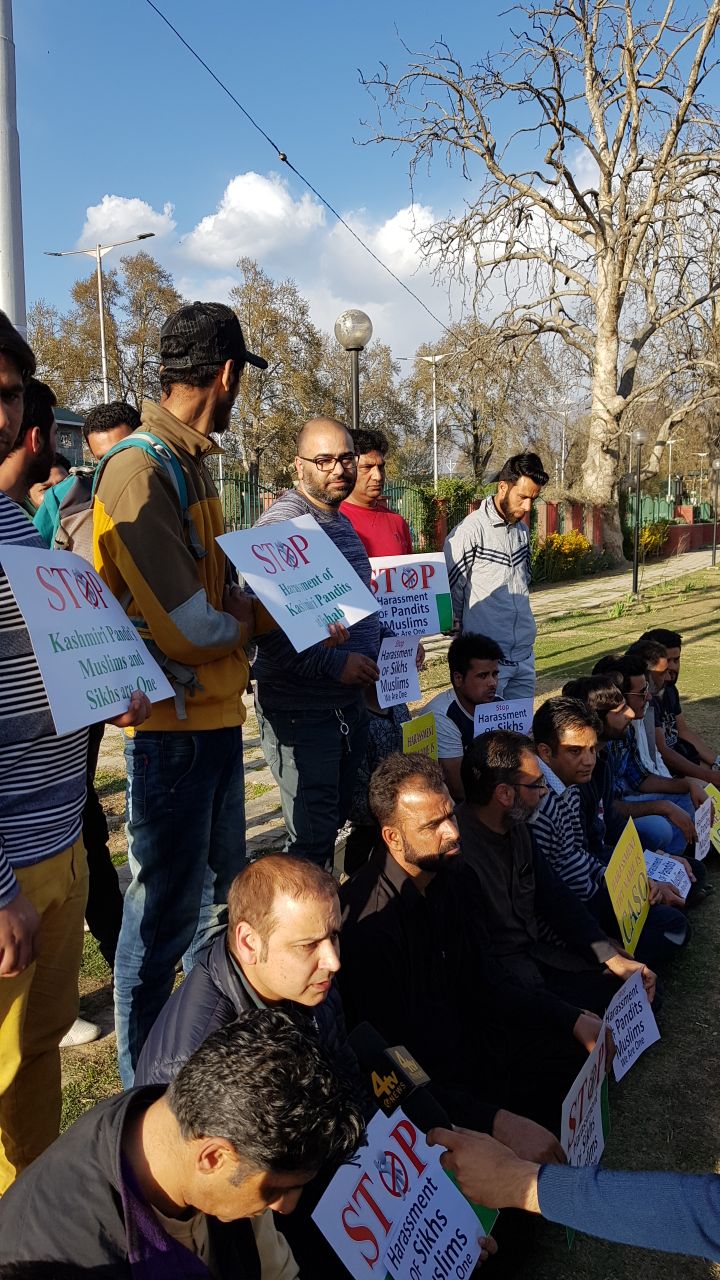 “I believe if our leadership from both the communities would have remained united during 1990s things would have different,” Amit said.

“It has now become routine that in the name of CASO, people are being harassed, properties are being damaged, we all -- Muslim, Pandith or Sikhs -- want Kashmir issue to be resolved once for all, but till big issues are resolved , we have right to live peacefully,” said a social activist from South Kashmir Inam Un Nabi.

“We appeal to the authorities to stop harassment and vandalizing of properties in the name of CASO, and allow us to live peacefully” he further added.

“It is our responsibility that we have to ensure that our pandith brethren should live peacefully; they should not feel insure like they felt in 1990s. Since, they were also attacked by soldiers we are here to tell the authorities that we are with them and we will not allow anything that will hurt our minority brethren.

Reportedly, on the intervening night of March 26-27 following gunshots near C.R.P.F camp the residents alleged that they were thrashed by government forces. They say that soldiers also thrashed Pandit family in Tahab and vandalized their property.

The residents staged a protest demonstration the next day against the alleged thrashing of locals and vandalism of property by government forces.

Despite repeated attempts IG CRPF couldn’t be contacted for comments.