'No Bullet Can Kill An Idea': Kashmir Scribes Hold Series of Protests After Bukhari's Assassination

SRINAGAR: Even nearly three weeks after the assassination of Syed Shujaat Bukhari, founder editor of the Srinagar-based English daily Rising Kashmir and other three newspapers in Urdu and Kashmiri languages, the media fraternity in the Kashmir Valley is in a state of disbelief.

Bukhari’s assassination on June 14 (Thursday) is being discussed in journalistic circles with the same intensity. In private conversations too there are whispers and at times, eerie silence.

Some journalists say the news about Bukhari’s murder is still to sink in.

One of the signs is that the frequency of routine visits by working journalists to various cafes and restaurants (where they usually chat and file their stories) dotting every nook and cranny of the summer capital, Srinagar, have significantly dropped. 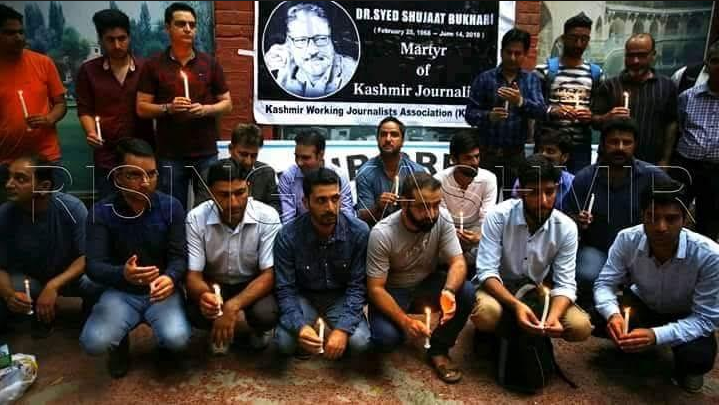 The routines of some journalists have changed too.

Several journalists have been recalling their times with him, writing farewell articles, paying tribute and sharing their moments with Bukhari over the years, even as they discuss---over and over again---the assassination and the conspiracy.

There are some, of course, who are silent.

There is a judicious mix of condemnation, tribute, recollection and also a sense of intimidation, a pressure to self censor. Social media engagements of journalists have not dropped significantly, but there is a visible change in content. Besides politics and news, Kashmiris journalists are now also writing about football world cup, cricket tournaments, poetry, films, music, satire.

Besides this, there are gentle debates whether journalists should engage in Track-II dialogues, whether they should participate in conferences and seminars, in back channel diplomacy or other such exercises.

After Bukhari’s killing, some journalists are posting long Facebook posts explaining their position that they have never been part of any Track-II initiatives in response to their names being published in the anonymous blog that had mentioned Bukhari’s name before he was killed.

Some voices are also making a point that the spaces for intellectual and social conversations that had been sort of reclaimed in the past decade are gone. Mourning the apparent loss of spaces for dialogue, they argue that a culture of conversations and opinions that had evolved has taken a severe hit.

Being a hotly contested place, Kashmir is also a very opinionated society. People have views. Some have strong views. Some are of the view that the assassination of late Bukhari has put a serious question mark on the rights and freedoms, curtailing the space that had been reclaimed.

However, there are few others putting up a brave face to resolve that “we will not be cowed down”.

But some journalists have also been reprimanded at home and told by their family members in no uncertain terms to consider switching their profession to avoid impending dangers.

On June 21, exactly a week after Bukhari’s murder, the Kashmir Working Journalists Association (KWJA) organised a condolence meeting during which tributes were paid to the slain editor.

Mufti Islah, Bureau Chief of CNNNews18 in Srinagar said: “We have mourned. Now the challenge is to focus on the future to think how to sustain the institutions that late Shujaat created”.

Peerzada Ashiq of The Hindu newspaper asked: “Is creating space for a meaningful dialogue a crime? Should he (Shujaat Bukhari) have been killed for alternative thinking and creating a space for Kashmiris for dialogue?”

Another prominent journalist said that “killing someone for a view or idea is a deplorable act and part of regressive thinking. No weapon can kill ideas”.

Independent journalist Sameer Yasir said: “Shujaat Bukhari was targeted in a brutal manner since his body of work highlighted the suffering and pain of Kashmiris at all platforms”.

On June 26, six days after the condolence meeting, the Kashmir media fraternity in collaboration with the KWJA and other media associations organised a silent sit-in near Clock Tower (Ghanta Ghar) in the heart of Srinagar.

During this peaceful sit-in, the killing of Bukhari was condemned by one and all. Senior editors of leading English and Urdu dailies participated in the protest programme.

Wearing black head bands and arm bands, members of the media fraternity marched silently from the spot where Shujaat was assassinated at Press Enclave towards Lal Chowk.

With placards “no bullet can kill an idea” and other banners in their hands, journalists demanded an impartial probe into the murder while also condemning the apparent threat issued by the BJP MLA Lal Singh in Jammu.

A senior journalist described Lal Singh as a “serial offender” and deplored a controversial statement attributed to the politician in which he had allegedly asked Kashmiri journalists to “draw a line for themselves” or “face Shujaat-like consequences.”

On the evening of July 2, many journalists again gathered outside the newly established Press Club at Polo View Srinagar for a candlelight vigil in memory of late Bukhari.

At exactly 7 pm scores of journalists gathered at the famed Polo View to lit candles with the aim to show solidarity with the slain Kashmiri editor and to remember him. Journalists made speeches to throw light on late Bukhari’s work and professional life. The journalists’ body KWJA is also planning a seminar on late Bukhari by next month.

Jaleel Rathor described Bukhari as “martyr of Kashmiri journalism” while another journalist Majid Hyderi questioned the manner in which Jammu and Kashmir Police was investigating the Shujaat Bukhari murder case.

Police have blamed militant organisation Lashkar-e-Taiba (LeT) for Bukhari’s murder and even named three active militants for the same besides claiming to have identified the blogger who led a slander campaign against the late editor, but all militant outfits including Lashkar have denied their involvement in the murder and instead strongly condemned the assassination.

Meanwhile, just at the entrance of Srinagar’s Press Enclave one can see a police vehicle. Its presence acts as a reminder how vulnerable journalist in Kashmir are!

Is journalism a crime?

Gowhar Geelani is a journalist and commentator from Srinagar, Jammu and Kashmir.