Those who are familiar with Kashmir are mostly so because of its either veracities: beauty and violence. Begs the question that why do they frequently exist in a pair? Yet beyond a million tales of despair, Kashmir is much more than just death and allure. Beneath its commonplace existence, lies a deep and intricate blend of history. What we today understand as Kashmir is a result of two millennials long hybridisation of Buddhist, Hindu and Islamic cultures.

Long before the ascent of Hinduism or Islam, Kashmir was the centre of Buddhism in North India and was the source of its passageway into Ladakh, Tibet and China. This fact is corroborated by the discovery of numerous ruins of Buddhist viharas, chaityas and stupas across Kashmir during the early 20th century and later on and also, implicitly by the influence of Buddhism on the Kashmiri architecture (for example, Sufi shrines with multi-tier roofs just like that of Pagodas, the Buddhist temples).

The most venerable among these remnants are the Parihaspore ruins. Parihaspore lies some 24 kilometres from the city centre on the Srinagar-Baramulla highway after a sharp turn near the sericulture nursery at Mirgund.

The road that leads up to the plateau crosses the historic village of Divar, once famous for its potters. Parihaspore, called Kani Shahar (city of stones) locally, can be translated to 'city of laughter' in the Sanskrit language. The ruins are of temples and residential structures built by Kashmiri King Lalitaditya Muktapida (699-760AD) of Karkota dynasty in 700 C.E when he shifted his capital from Srinagar.

As per Kalhana, the author of Rajtarangini (a chronicle of ‘Kings of Kasmir’), who goes head over heels to glorify him as a great warrior, Muktapida conquered large parts of the subcontinent from Kabul to Central Indian plains making Kashmir the centre of power. Muktapida ruled during a phase that marked the transition from Buddhism to Hinduism in Kashmir or rather a phase when Buddhism coexisted with Hinduism.

After a steep hike up the plateau, I reached what has now become a marketplace near the ruins. My uncle, a local from Divar village, was accompanying me. A university along with students’ dorms, multiple cafes, colonies for policemen and a farmhouse by some local political leader have recently mushroomed around the site. After trudging a bit we reached the gates of the compound which lies almost at the margins of the plateau from where one can see a jaw-dropping panoramic view of the Srinagar city, a thick layer of smog altogether brightening its lights.

The main complex of the site is fenced by ASI (Archaeological Survey of India) and consists of 3 main structures. The ruins of the first structure that clutches one's glance on entering the compound is the plinth of a temple that was dedicated to Lord Vishnu, which used to have sculptures adorned in gold and silver back in its days of glory. Kalhana also mentions in his Rajtarangni that a huge pillar depicting Garuda (A bird that is Lord Vishnu’s ‘vahana’- mount vehicle in Hindu mythology) was erected by Lalitaditya and glorified the grandeur of the place. The statues and idols were looted and plundered over time after Lalitaditya's sons moved the capital back to Srinagar. Some idols excavated from the site lie at the SPS Museum in Srinagar but most of them were shipped off to various cities across India.

The next structure that lays just ahead of the temple is the ruins of the plinth of Raj Vihara or the King's palace where the demarcations for the rooms are still visible and in its centre lies a large water tank carved from a single stone. As I saw a local family spread out their sheets for a little picnic and some kids play in the ancient water tank now embellished with grass and moss, I could only imagine the pomp and opulence of this palace back in its time when it was just at the disposal of the mighty king.

Still the most conspicuous of all the structures are the ruins of the Buddhist Chaitya (a prayer hall) that lies a tad bit away, in a central position, with a very imposing appearance. On careful observation, it seemed like a replica of a mandala (symbolism for the universe as well as the nature of the mind in Buddhist cosmology), with a typical raised plinth with entrances on all four directions.

The Chaitya bears clear symbols of Mahayana Buddhism, with beautifully sculpted reliefs of Buddha on the front of the stone palisade covering the stairs and dragons carved all over the margins of the plinth. Massive steps lead up to the main hall where as per Kalhana, a towering statue of Buddha used to sit. This must have been later plundered as now a huge uncanny stone lies in middle of the Chaitya with snakes loitering all around it.

As I couldn't understand its position or significance, my uncle, perceiving so, said that it was placed by a couple, Divraz and Yakmaen, who laid a treasure under it and in future, someone descended from the potters of Divar will locomote it away to reveal the riches.

As per the local myths, the temples were built by the same couple, the man named Divraz and the women named Yakmaen long back in time. “They used to ferry these huge stones on river Jehlum that passed adjacent to the plateau and then carry them up to the site”, my uncle added. Historical facts do ascertain that at one point the river used to drift just nearby but was diverted by human intervention during King Avantivarman's (855-883 C.E) time.

Apart from the three structures rest of the compound lies bestrewed with big blocks of rectangular stones that once must have been part of the temples and the palace; some of them sculptured with Buddhist symbols and some unadorned. The stones from the complex were disassembled for use by later Kings for various temples and other projects like the Sugandhesha temple in Pattan. Some of the blocks were utilised by the Dogra Maharaja of Jammu Kashmir to build the Jehlum cart road.

Just when I was about to depart from the place some curious locals greeted my uncle. After probing my cause of visit they told me about the local potters of Divar village, who are said to have lived there since the time of the historian Kalhana. Only one of these families still makes pottery. On further enquiries, I found out that people still find remnants of ancient pottery during the ploughing season. Cups, mugs, pitchers, plates with beautiful motifs: almost everyone has had a find.

“Some people even find stone idols of Buddha and Vishnu after digging up the orchard-laden wuder (plateau)”, said Ghulam Hasan, a local. They then pass it to black markets in exchange for hefty prices. Yet it was disheartening to know that some land mafia are systematically plundering the plateau by earthmoving the karewa soil which is considered good for various agricultural purposes. This has lead to defacement of the plateau from various sides.

After conveying my goodbyes I decided to descend down the wuder but stood stupefied by the beautiful sunset sinking down the peaks of western Himalayas with the silhouette of Parihaspore in the foreground. Such monuments should be celebrated, preserved and protected better, yet we let them evanesce into dust in front of our eyes. 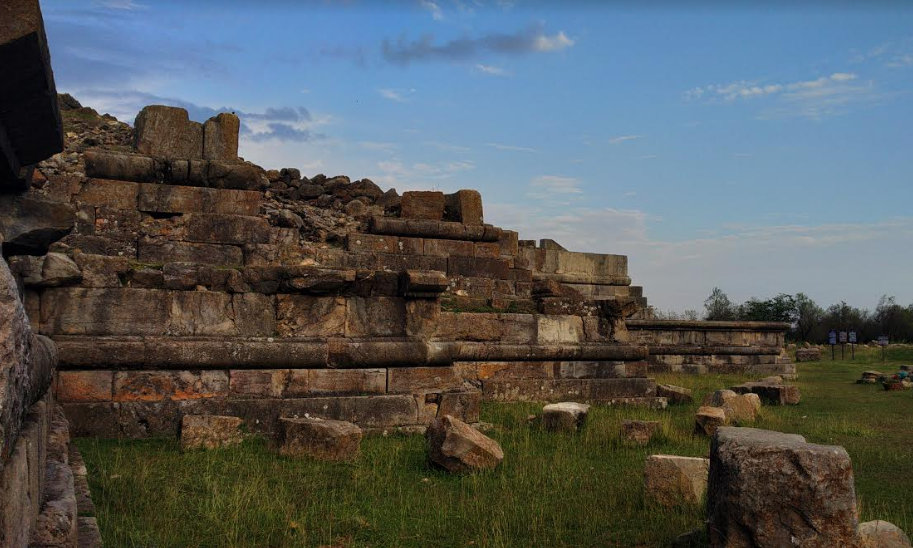 The stone blocks the once formed the part of the temples and palace are now littered all around.

A dragon carved on the Chatiya. Dragons represent enlightenment in Buddhism. 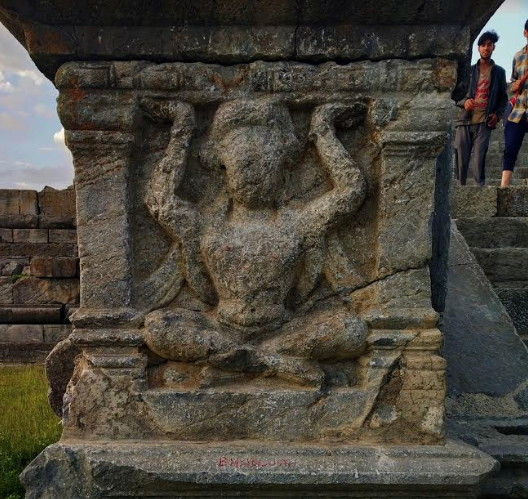 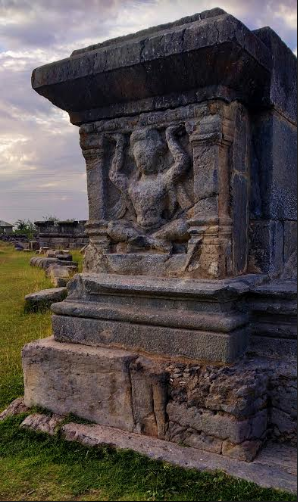 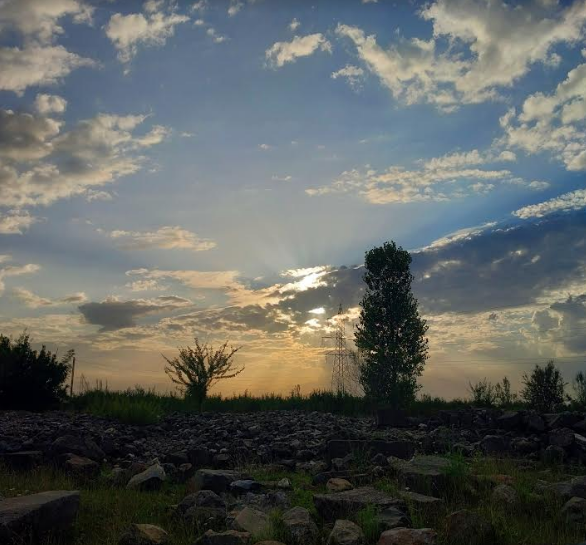 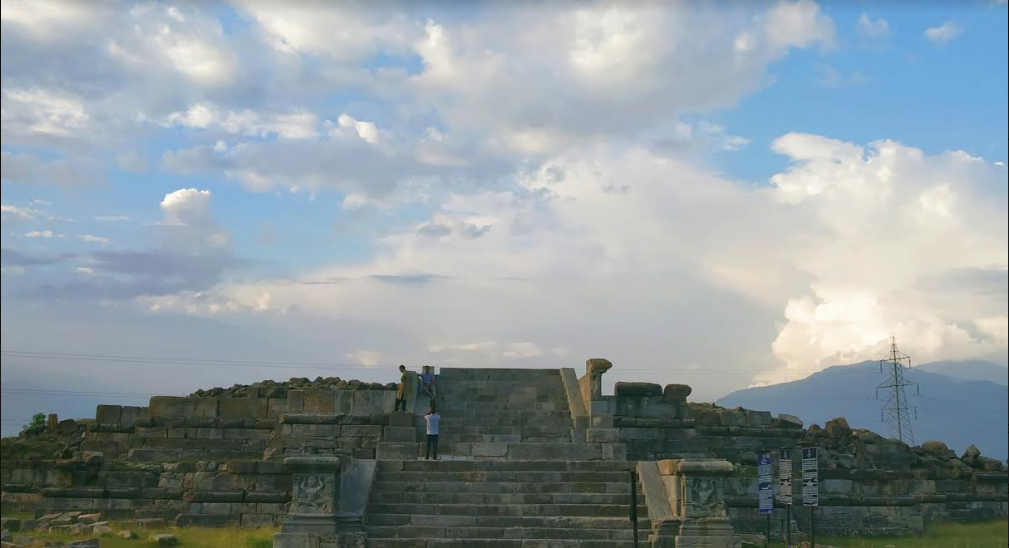