Life Carries On for Nomads of Jammu and Kashmir

It is life as usual for the Gujjars and Bakarwals who rear flocks of goats and sheep in the middle altitudes of the western Himalayas. They travel between Jammu's mountains and the meadows of Kashmir every year with their cattle, horses, goats and sheep.

In January this year a dastardly attack was perpetrated on one of their little girls, 8 year old Asifa, who was abducted, raped and killed.

Although it is said that the crime was meant to deter the nomads from travelling down from the heights every winter, life gives them no choice. As winter sets in they arrive at the foothills for sheer survival, and just as regularly when the winter snows begin to melt in April, begin their long journey with their livestock back to the alpine pastures for grazing during the summer. They return in September as the weather worsens.

In 2011 the Jammu and Kashmir government approved 100 ‘mobile schools’ to be set up for the nomad children in an attempt to ensure they can keep up with their studies wherever they go. However, little has come of this and now along with poverty and a lifestyle that directly impacts on their health and education, the Bakarwals and Gujjars fear for their safety as well.

The photographs below give a glimpse into their lives: 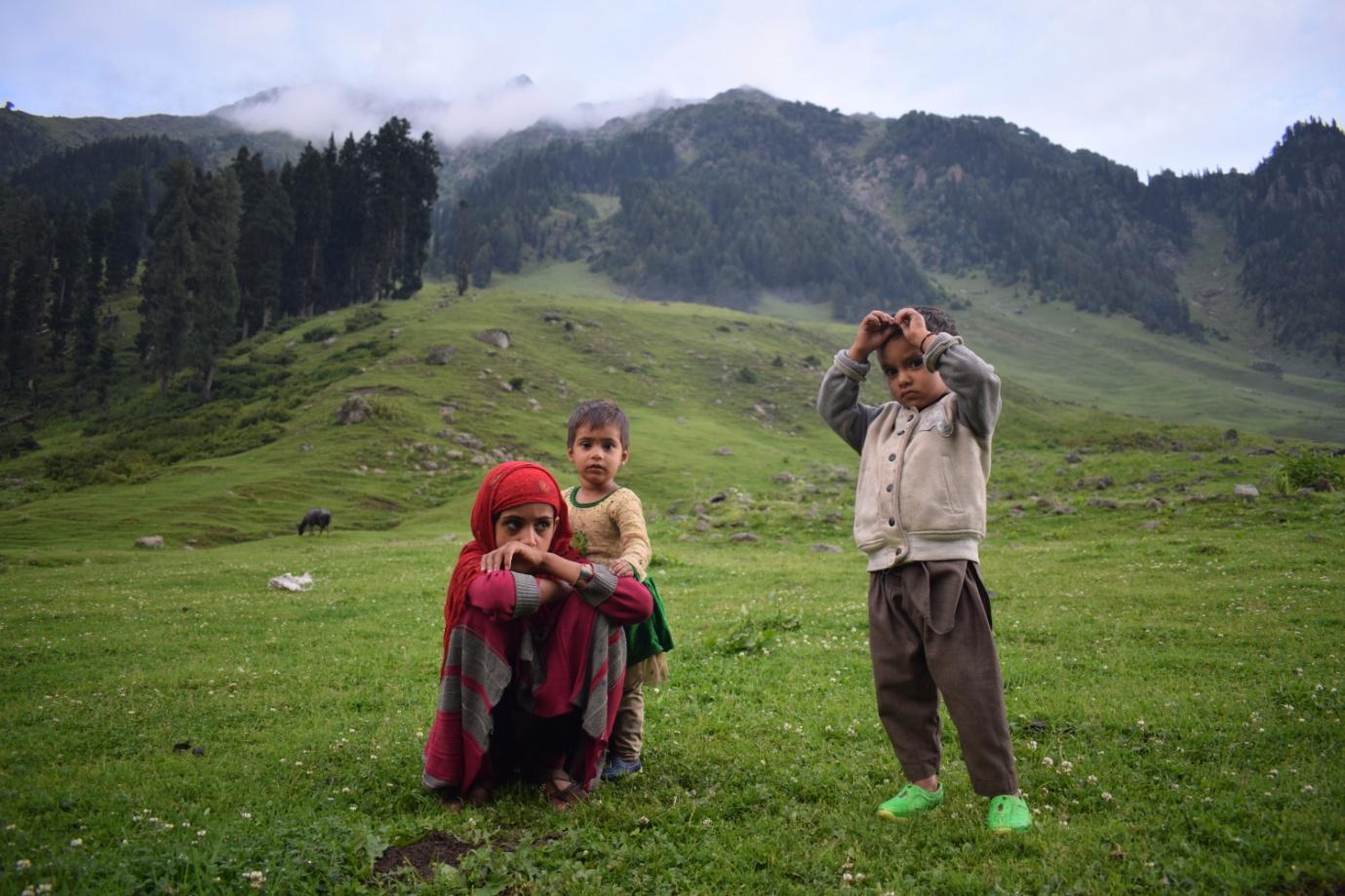 Gujjar and Bakarwal children do not go to school, due to their constant travelling, and many remain illiterate 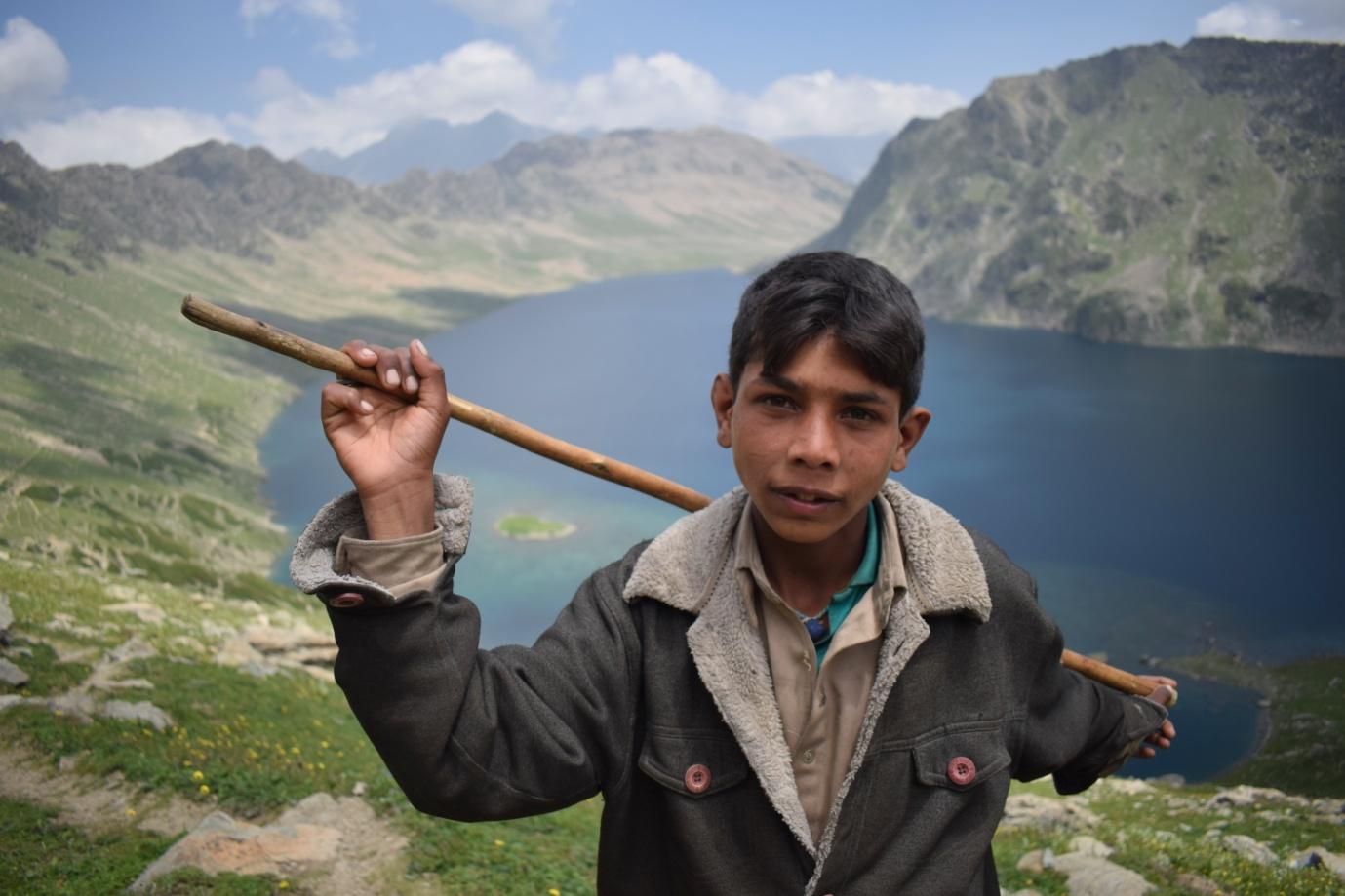 Ahmed Nazir poses for a picture at Tarsar Lake. He rears flocks of sheep and goats between the lower and higher places of Pahalgam 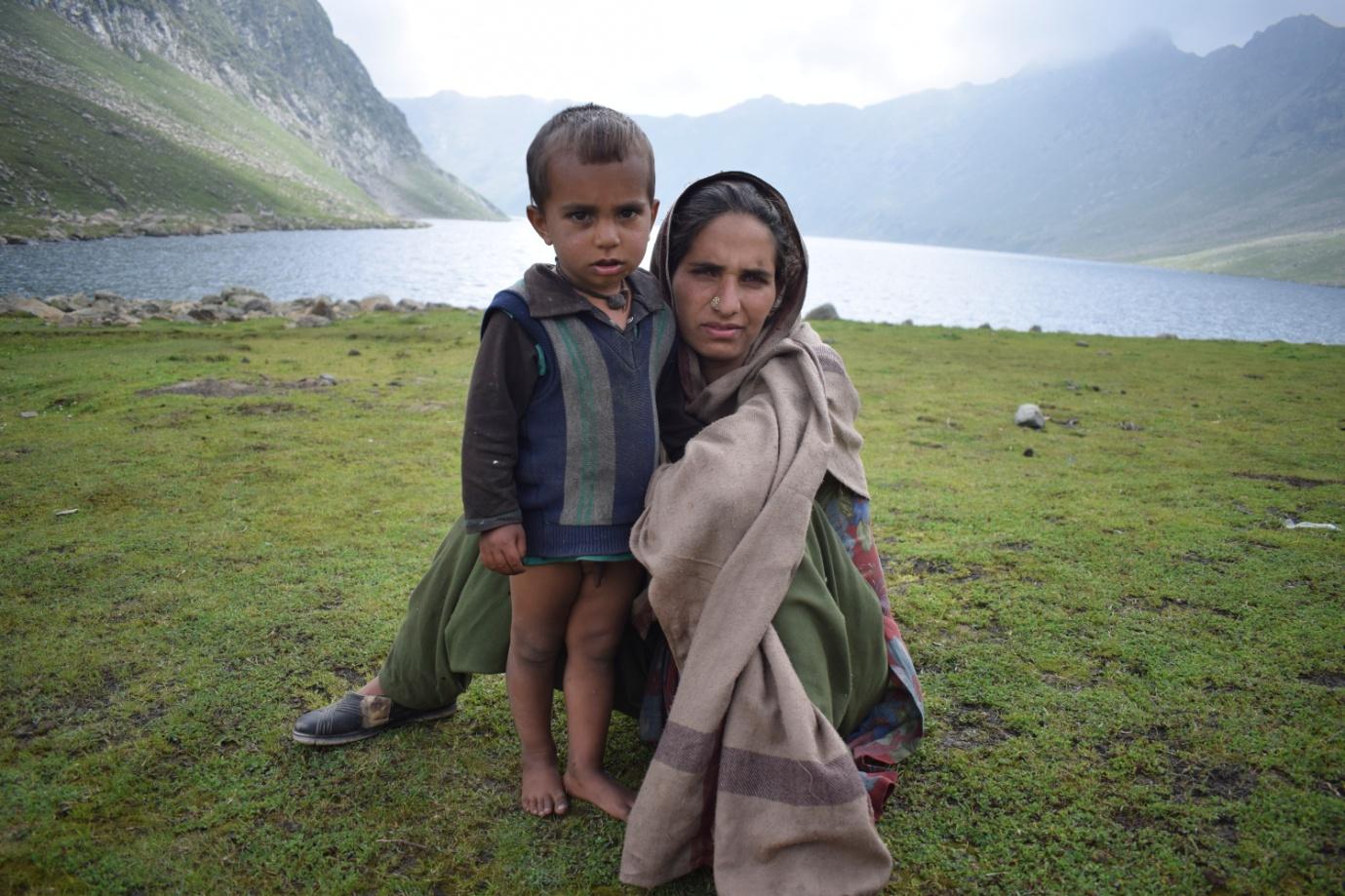 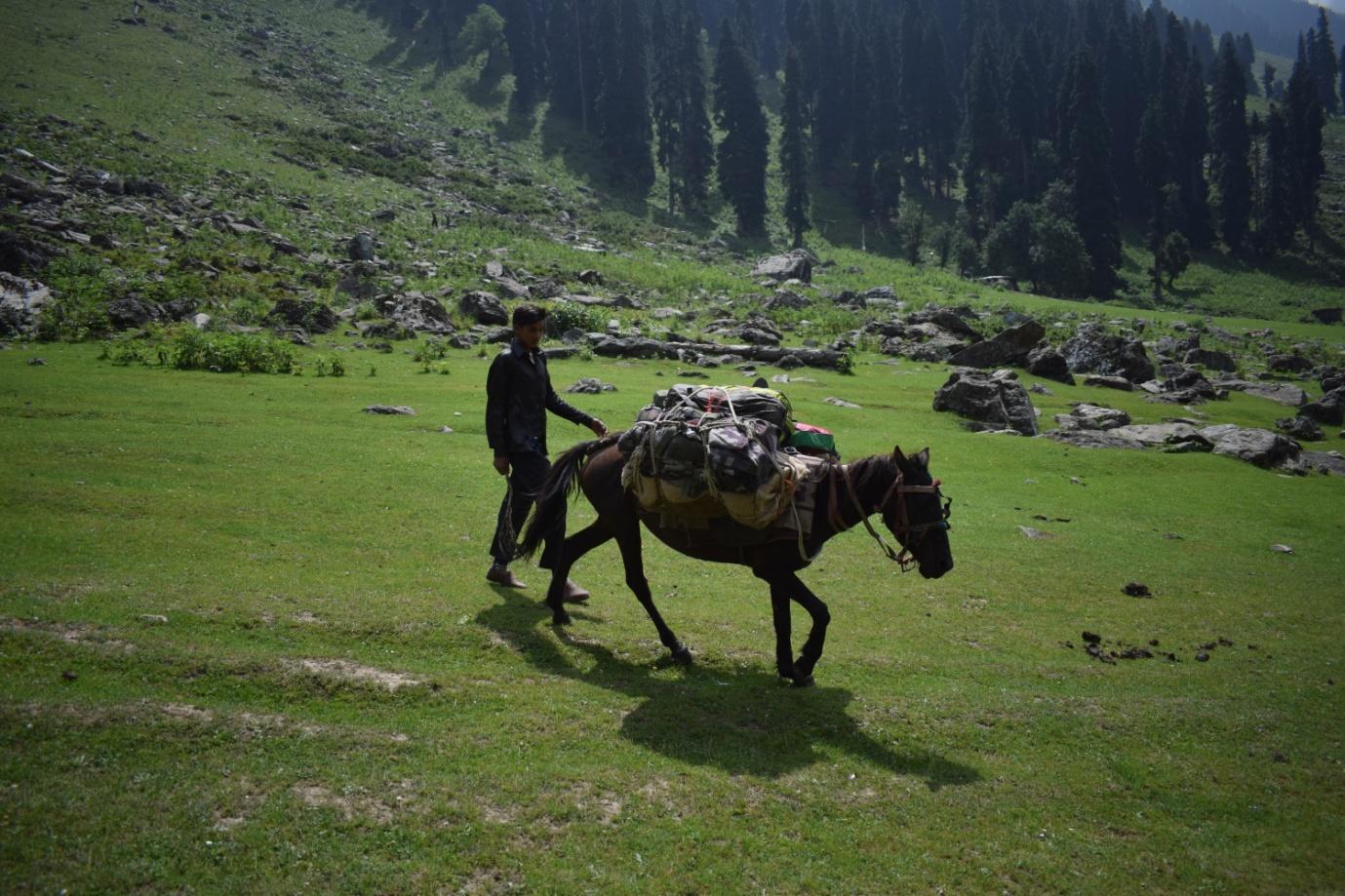 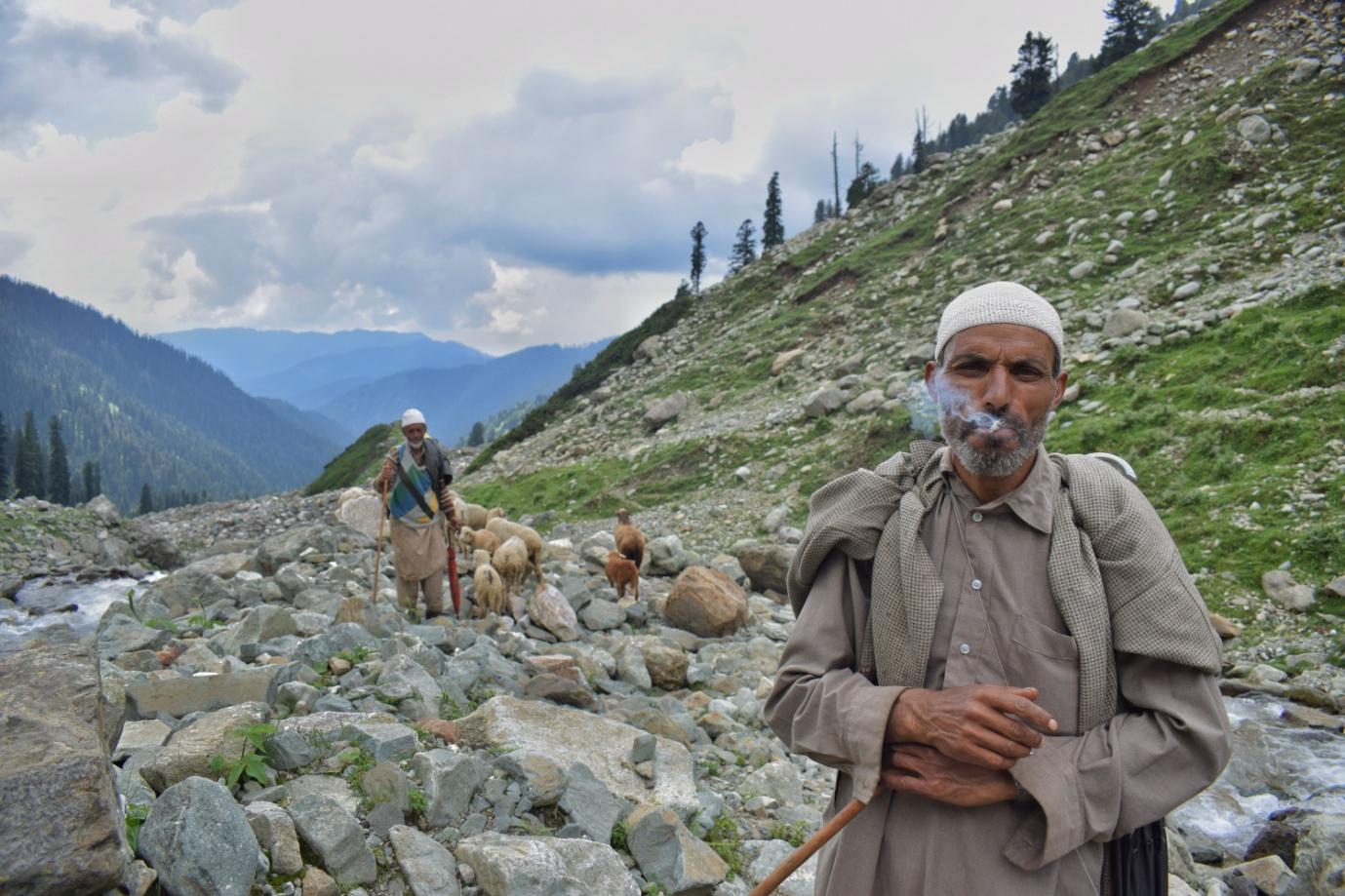 Mohammad Afzal travels from Dailgam Village to Rangwaad meadows via Margan top. He rears sheep and carries the necessary materials with him. 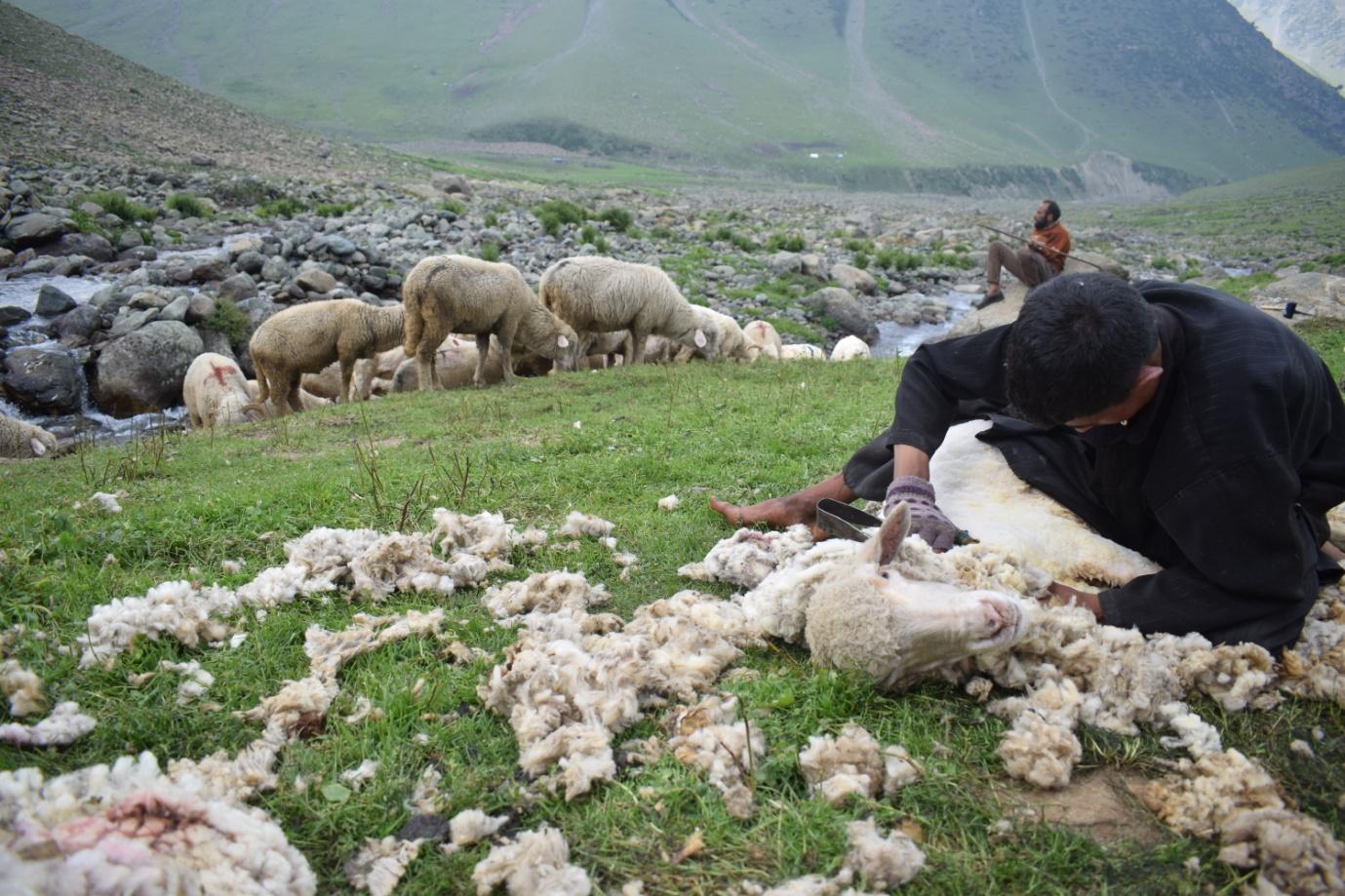 Sheep's thick wool is trimmed in the summer. One sheep’s wool will sell for about Rs 60 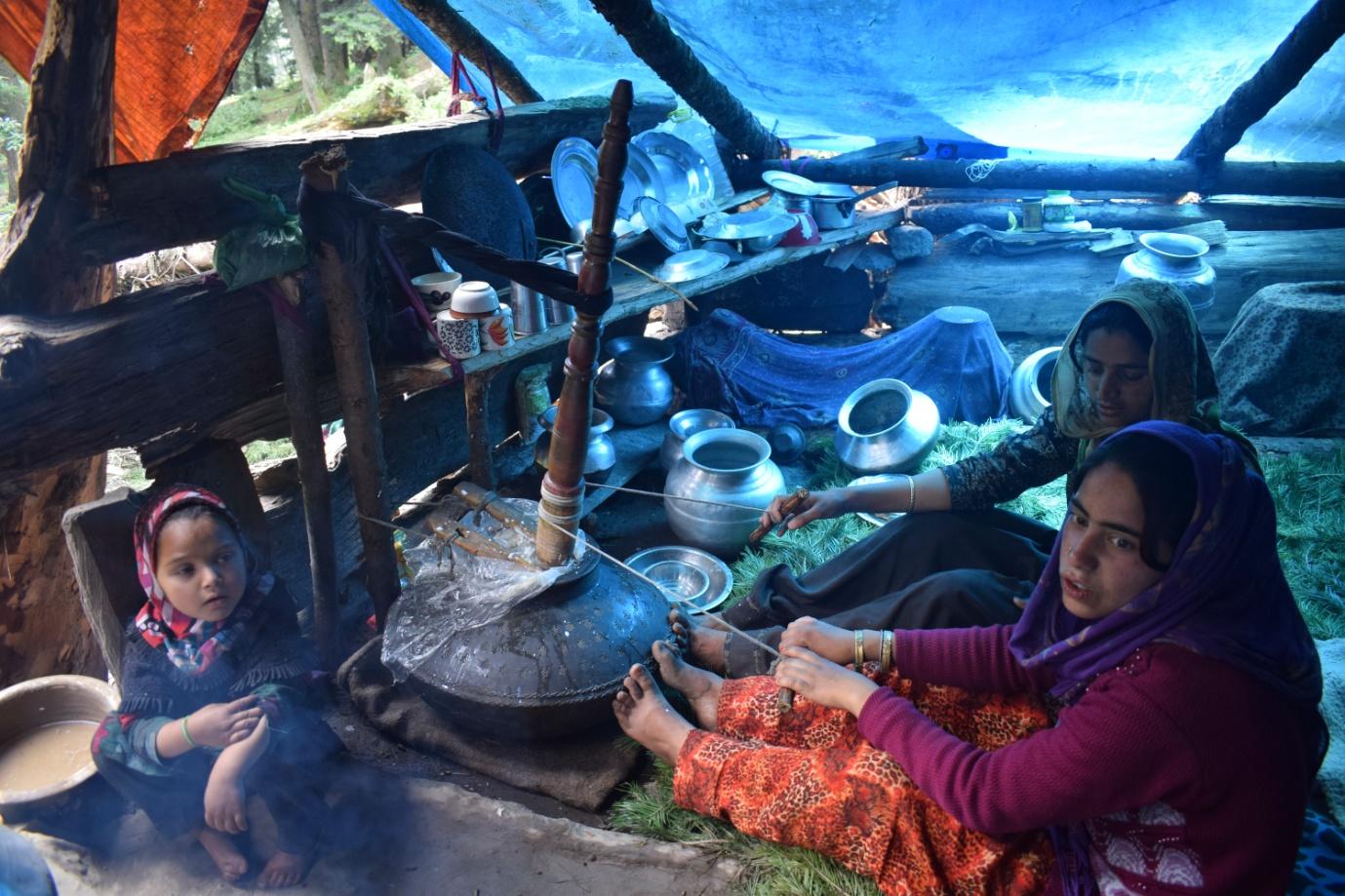 Two nomadic sisters sojourned in Rakh (in Daksum, Anantnag) frothing milk using a fancy frother. This frother is commonly called ‘doun tull’ in Kashmiri, and consists of an earthen pot (matki) at the bottom and a long wooden stirrer (tull) immersed in it. The girls in the picture are continuously stirring the milk kept inside the matki with the help of a thin rope wound around the tull. Because doun tulls make use of the centrifugation process, two distinct phases of milk are formed in the pot: whipped cream at the top, easily separated, and below the savoury drink called gurus or chach. Douns were a common household article in the 80s and early 90s, but have lost their charm to modernisation, and are now restricted to a few Bakarwal families 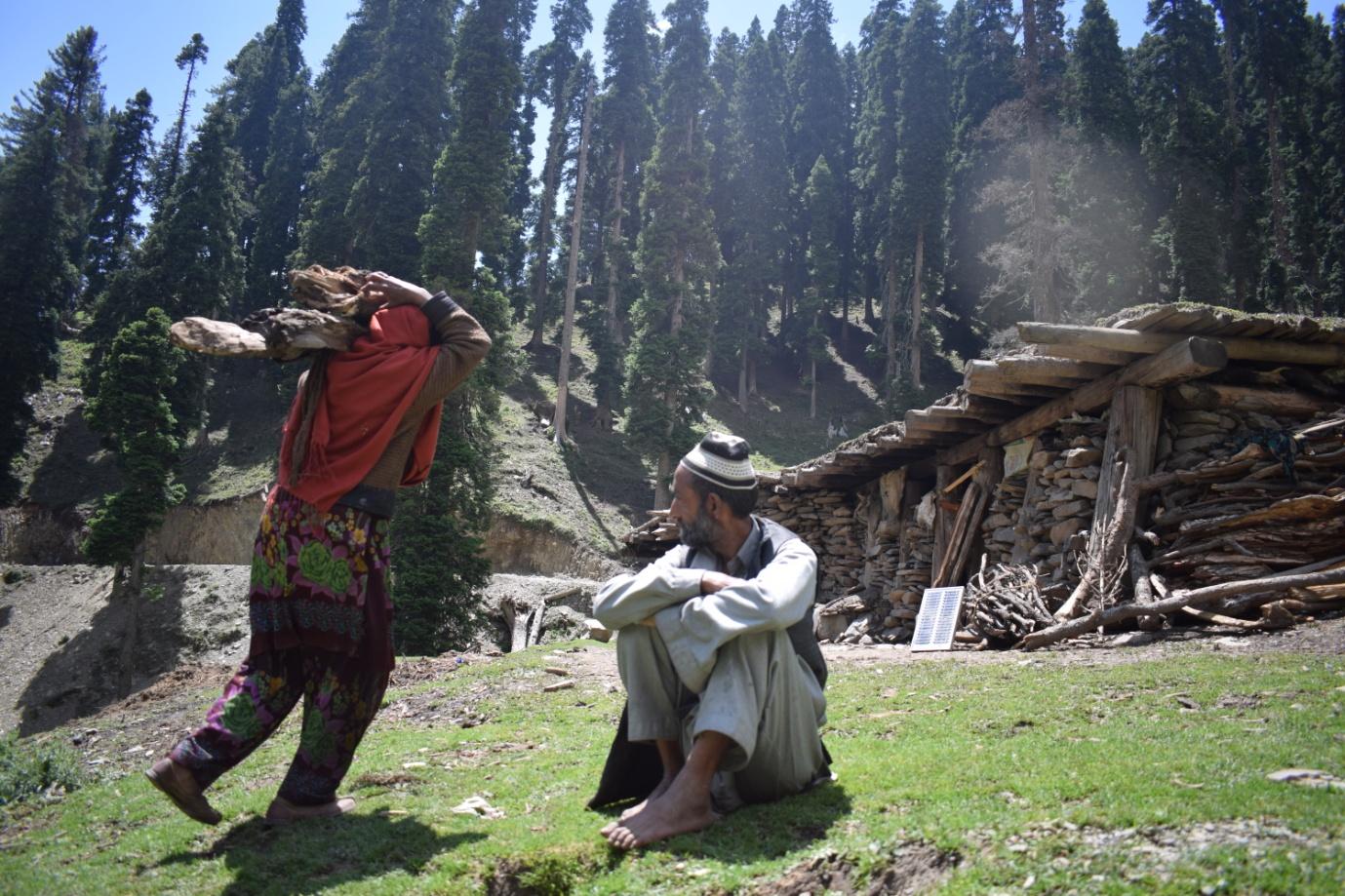 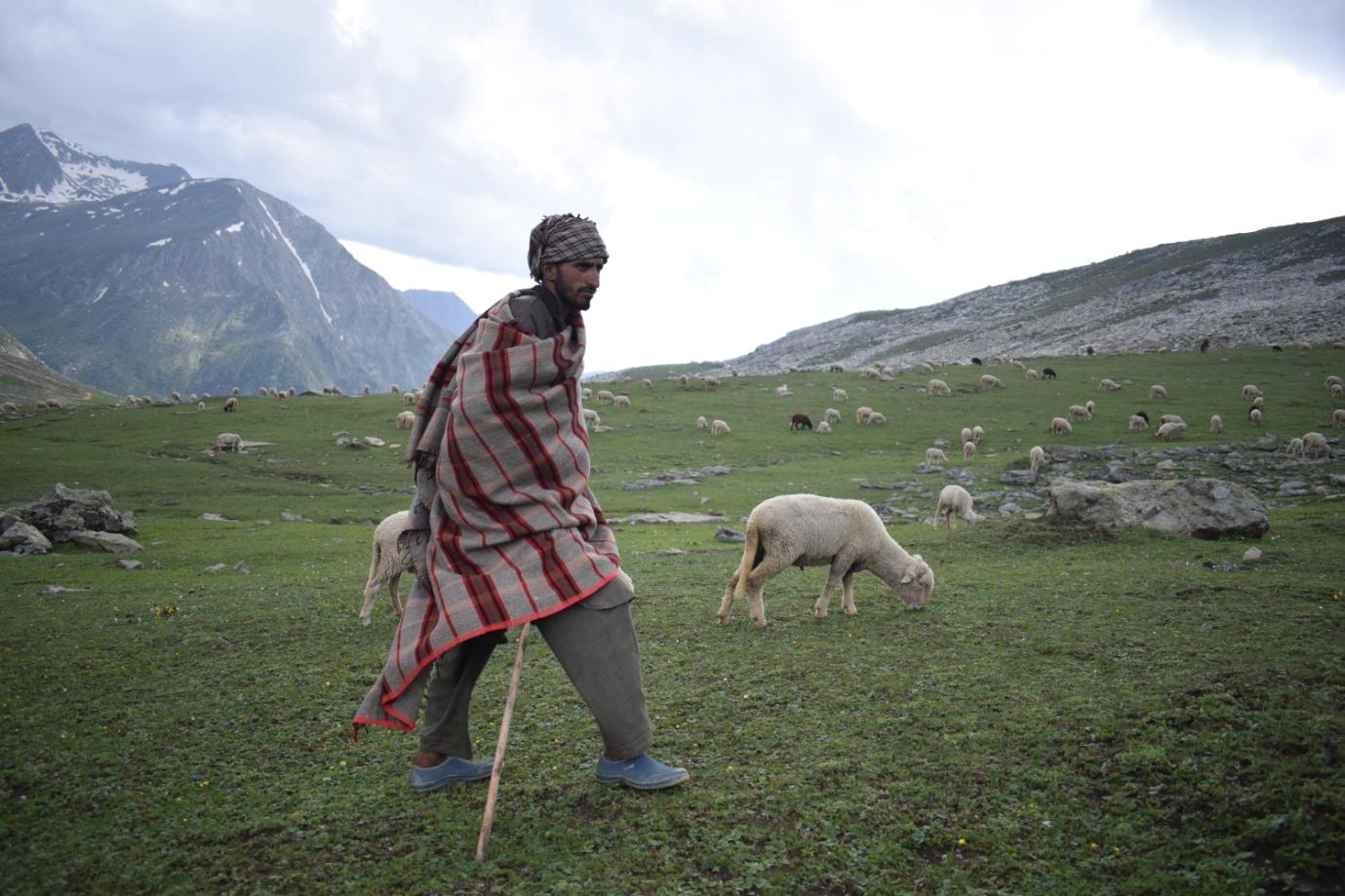 Sheep grazing in the meadows of Kokernag 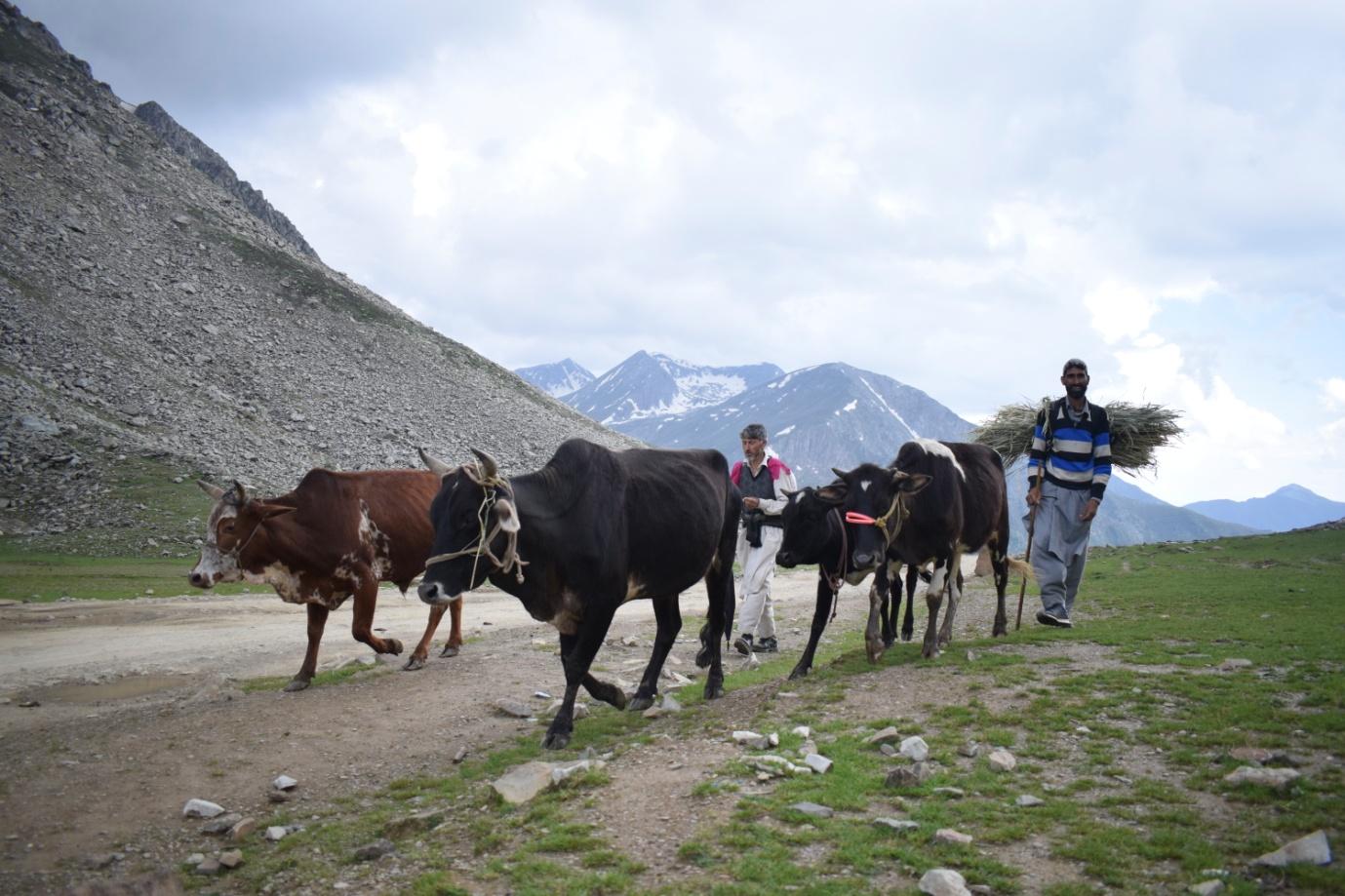 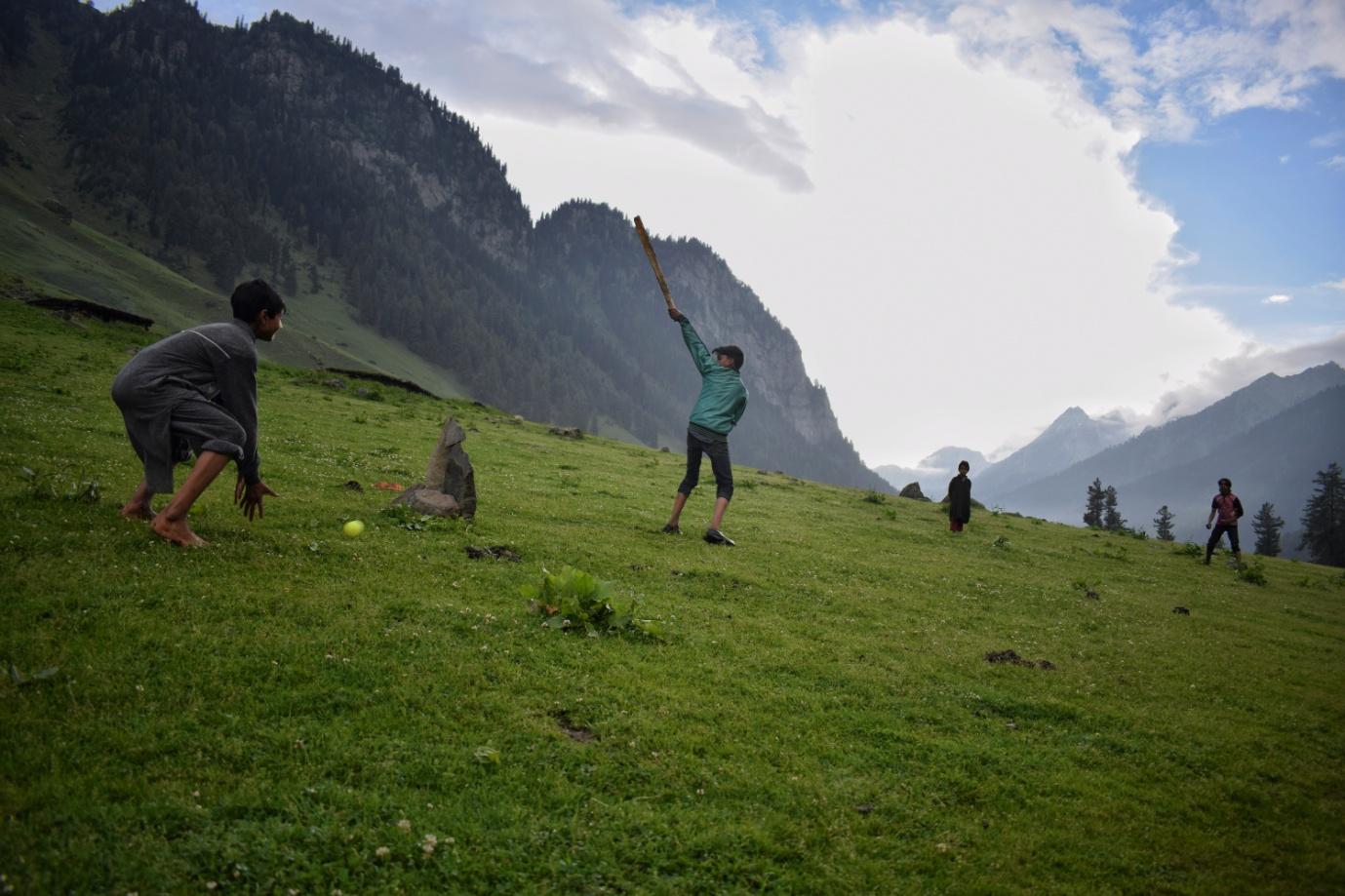