‘Indian Army Has Taken Lives - Families, Young Kids - What Message Do they Want to Send?’

NEW DELHI: A protest was held at Jantar Mantar on December 19 against the recent killings in Kashmir’s Pulwama district.

Addressing protesters, Delhi University professor Apoorvanand said, “AFSPA [the Armed Forces Special Powers Act] should be demolished. There should be an investigation of people killed by the Indian Army. We are against himsa [violence].”

Apoorvanand told The Citizen that “there are many failures of the present government and the Kashmir policy is surely one of them. Kashmir has been a challenge for every government since 1947. The challenge is to make Kashmiris and Kashmir friendly to India. The Indian government has been devious, unkind and cruel to Kashmiris, but certainly there has not been alienation of this scale till now.

“The only achievement of the Narendra Modi government has been to push Kashmir further away.”

Concerning attacks on minors, Apoorvanand was of the view that the Indian state sees Kashmiris as an enemy to be subjugated, and Kashmir as an enemy territory to be annexed. “What is the difference between a child and an adult if they are not even considered humans?” he asked.

“Attacks on civilians do not create large-scale outrage among Indian citizens - so why should they feel like Indians if the rest of India doesn’t share their pain?” Instead, “we have reached a place where instead of using no weapons we ask the Indian government to use non-lethal weapons,” he added. 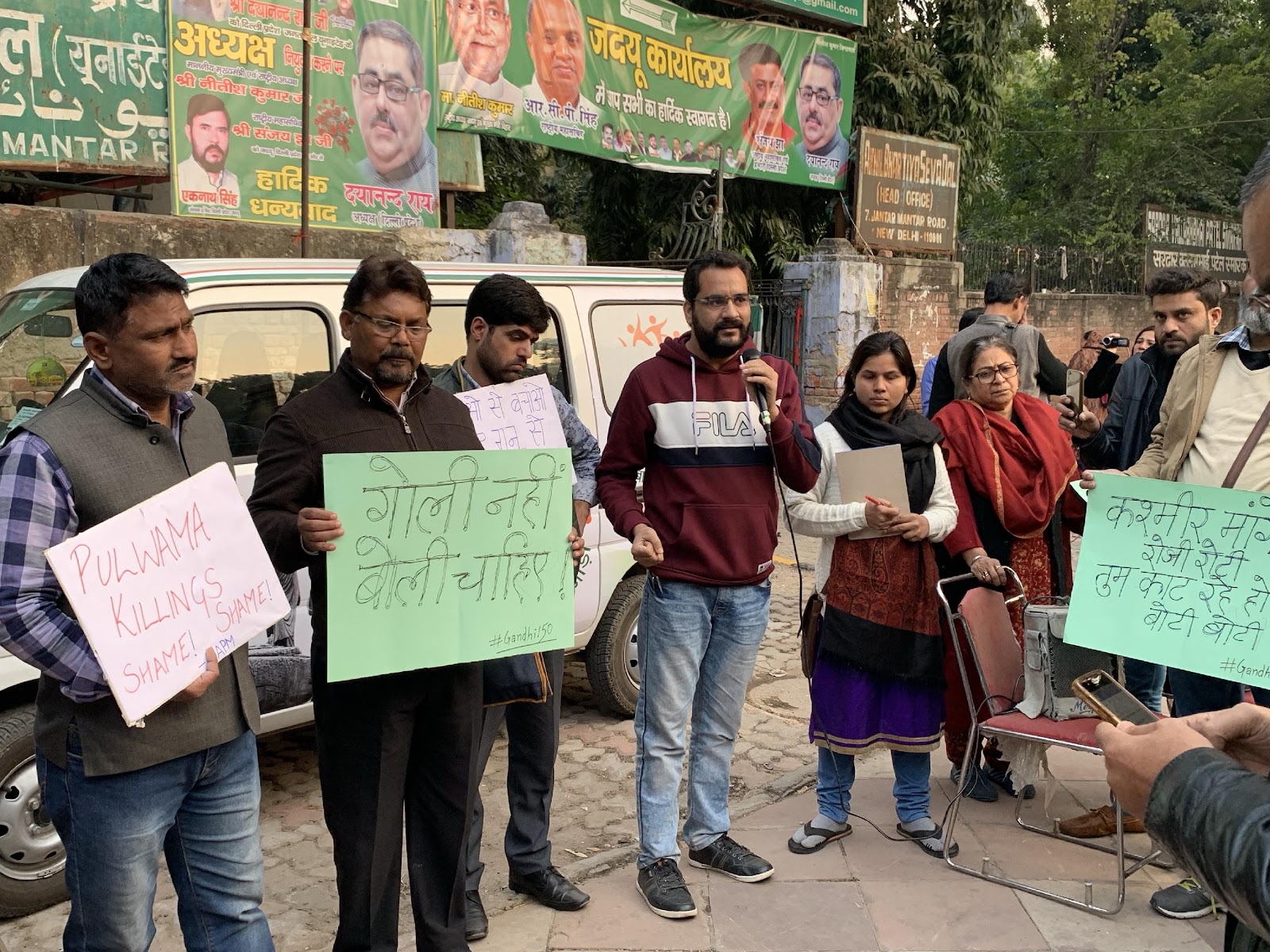 Shamsul Islam, a professor of political science at Delhi University told The Citizen”

“The Narendra Modi government has been anti-Muslim, so if we look at the Kashmir situation from their side, it’s not a failure but an achievement. The RSS has always been of the view that Muslims should either convert into Hindus or accept second-class citizenship.

“If Jitendra Malik, an army man posted in Jammu who is accused of killing Inspector Subodh Kumar in Bulandshahr can do such a thing in the Hindi heartland, we cannot imagine what would be the attitude towards the people of Kashmir.

“It is ironic how India, which has given political asylum to Dalai Lama and Tibetans because of China’s violence towards them, is treating the people of their own country with violence.”

Islam added, “When we go to Jallianwala Bagh we see the marks of bullets in the wall - the wall is a testimony of the atrocity called the Jallianwala Bagh Massacre. We feel bad for those people, but here are humans living with pellet marks in their bodies - they are living testimonies of the scale of atrocity done to them at the hands of the Indian government.”

Javed from the organisation Khudai Khidmatgar emphasised the unwritten pages of Kashmiri history. In his opinion the three snakes in the valley - the Abdullahs, Muftis and Lones - should stop being fed milk from other sides. 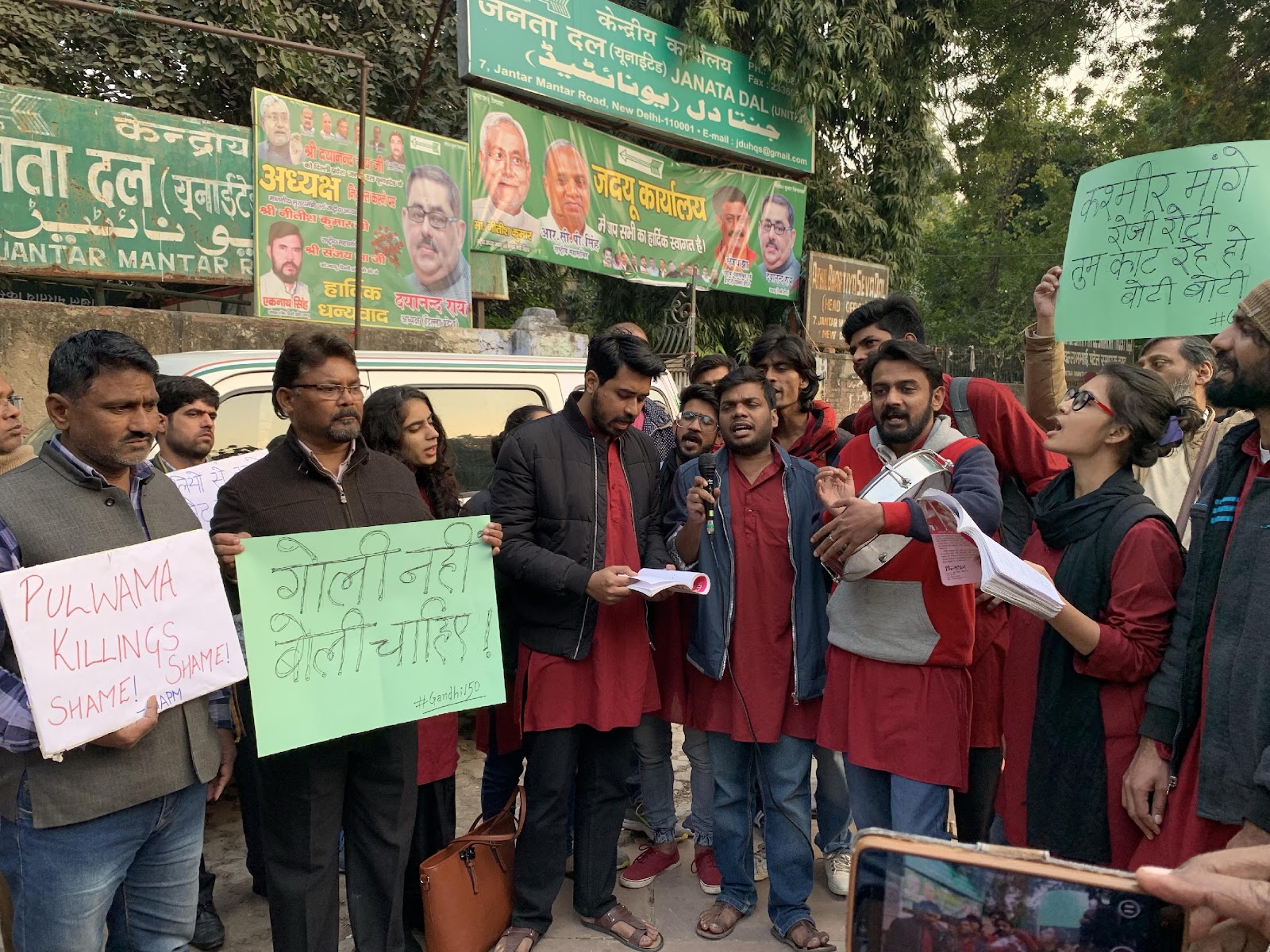 The Citizen also interviewed Deshdeep, an activist who said, “If Kashmir is a part of India then why not similar rights? What is really shocking is that they don’t have the right to file their case despite having a number of witnesses.”

On the killing of minors in the recent violence, he said “this is not new, it’s seamless and anti human. [S.A.S.] Geelani and BJP are to be blamed for the recent killings.”

“Being humans we have solidarity. I think Kashmiris are disappointed with people from other states. The people of Kashmir have positive anger - we stand here with them to defend their rights.”

According to Neha, a university student, “It is unfair. Their entire history is covered in violence and blood. It’s like the absolute power can do what it wants. One may call them traitors but what have you done to the state?”

Sharing the experience of her Kashmiri friends, Neha said, “It violates basic human dignity. My friends always have to carry their ID proof. The freedom I have for not being a Kashmiri or a Muslim is totally different from what they go through. Nobody questions me the way they are.”

She added, “The Indian Army has taken the lives of families, young kids - what message do they want to send? Is it to fear the force? The job of the army is to make one feel safe, but in Kashmir it is counterproductive.”

For student Aatir Arshad, “These all are planned incidents and the victims are the common citizens of Kashmir. It has been happening continuously.”

Ovais Sultan Khan, a human rights activist, told The Citizen that attacks on civilians should stop, and there should be a peaceful conversation. “It is really tragic if security forces aren’t held accountable, because then there will be conscious killing of civilians.”

Prem Sanghwani of the Sanghwani Cultural Group which participated in the protest said, “If someone aims a gun at your head, you will also be throwing stones to safeguard yourself.”