ITANAGAR: The situation in Arunachal Pradesh has taken a turn for the worse with the state government suddenly climbing down in the face of violent protests and declaring that it will not implement the report granting Permanent Residency Certificates to six communities living along the Assam-Arunachal border. 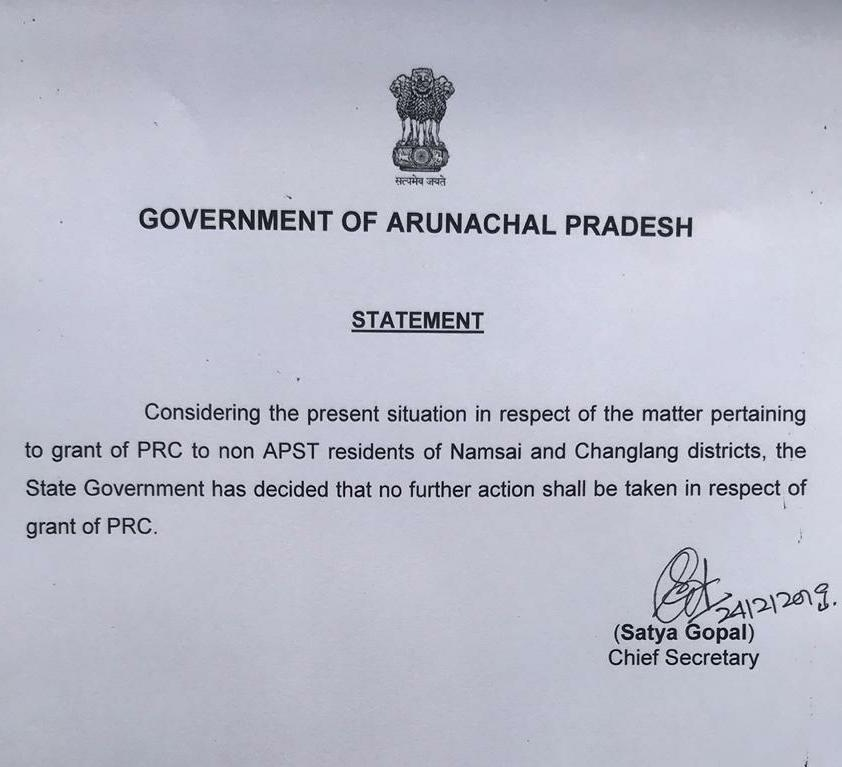 Even as a strong mob has surrounded and is currently ransacking the residence of Deputy Chief Minister Chowna Mein of the Bharatiya Janata Party, who is perceived in the state as having initiated the report for votes.

His residence is under attack and being ransacked despite the fact that the Army has been called in on since February 21 with reinforcements added, and the state is under curfew. More details on this specific attack are awaited.

The state Assembly did not meet yesterday to discuss and implement the report as scheduled.

Citizenship rights that have turned entire North East into a region of protests for different considerations, have led to violence, tear gas, firing and now one death in Arunachal Pradesh that, to use the words of local residents, “is burning.” The state has lost connectivity with an internet clampdown, and curfew that has been extended till Monday until further orders.

And why? Because of the totally inept handling of a long burning issue in Arunachal, of Permanent Residency Certificates for six communities who live along the Arunachal-Assam border and have been denied a Scheduled Tribes status as well as PRC rights. Two high powered committees appointed by governments earlier had submitted reports that were disregarded by state governments for various reasons. This third committee has recommended PRC’s for the six communities with riders that in effect deny them the rights reserved for Scheduled Tribes in the region.

However, a premature announcement by the Arunachal CM looking on it as an election ploy triggered off violent unrest with at least 18 students organisations, along with some youth and community outfits, coming together to protest against the report that had not even been released at the time. Rumours and misinformation further fuelled the protests that have since attacked government buildings, vehicles with the Army being called in to control matters.

Anger escalated after the firing on the protestors which injured three, of whom one has now died. The agitating groups plan to bury him in the Indira Gandhi park today in a move that has the governments both in Itanagar and New Delhi on tenterhooks.

CM Pema Khandu has been unable to control the situation, with tear gas unable to quell the stone pelting mobs opposing the citizenship rights to the six communities that many see as being non-indigenous. This despite the fact that these groups have been living on the Arunachal side of the border for centuries, as well as in Assam.

The Army was called in on Feb 21 with more reinforcements coming in over the past couple of days. Curfew has been imposed and will continue to Monday February 26, subject to review and further extension. All internet facilities have been snapped with the state losing all links with the outside world. Despite the curfew mobs continued to patrol the streets through the nights with residents hearing screams, slogans, shouts with many rounds of firing. “Its terrifying,” a student said.

Assam is also in the grip of protests over the centre’s Citizenship (Amendment) Bill and the National Register that has created discord and left lakhs of individuals to further prove their citizenship. Although in Arunachal Pradesh the stir is over the more specific reason of a report granting permanent citizenship to tribes hitherto denied this privilege it feeds into the larger environment stoked by citizenship and migrations fires, always a very sensitive issue in the North East.

The situation remains very tense, with the burial scheduled for later in the day providing yet another watershed moment for the sensitive border state, made all the more so by China’s interest and refusal to recognise this as part of India. Union Home Minister Rajnath Singh has discussed the situation with the CM and urged people to remain calm. As has the chief minister as well. The Congress Opposition leader, Takam Sanjoy has described the death of the youth in firing by the security forces as “the saddest day in the history of Arunachal pradesh.” The Congress has demanded the immediate resignation of the CM and his Cabinet, and imposition of Presidents rule.