General Hooda's Note on AFSPA: Take it From the Courts to Parliament

What could be Lt General Hooda's suggestions?

NEW DELHI: The Congress in its election manifesto has spoken of the need to review the Armed Forces Special Powers Act. It has not said much more than this bare statement, but just the couple of lines were sufficient to set the BJP and its captive media into hysterics after Prime Minister Narendra Modi set the tone at an election rally in Kolkata with, ““The Congress in its manifesto, which is full of lies, has promised to remove the law that protects our forces in terror-affected areas. Removing this will actually help Pakistan. The Congress has always bowed down to terrorism.”

All that the Congress manifesto said was, “The Armed Forces (Special Powers) Act and the Disturbed Areas Act in J&K will be reviewed. Suitable changes will be made in the text of the laws to balance the requirements of security and the protection of human rights.”

And since then Lt General D.S.Hooda, retired as General Commanding-in-Chief of the Northern Command, is being plagued by BJP leaders and television reporters for his views, as in his new capacity as advisor to the Congress he had given in a report on ASPA. BJP leader Arun Jaitley asked “what were Lt General Hooda’s suggestions?” The general has refused to comment on this, maintaining dignified silence.

What could General Hooda have said in his note? Being a military man, precise and to the point, he would have made suggestions that he has placed earlier in the public domain. And clearly feels strongly about. He has written a few articles on AFSPA, more so after the Supreme Court examined it in the wake of a petition filed by military And there is nothing in any of his articles to justify the hysteria from the BJP, or the ignorance being exhibited by television anchors and reporters.

It can be safely presumed that the general’s review would have followed fairly approximately what he has been saying since December last year when the Supreme Court rejected the plea of over 700 Army officers and soldiers who had raised concerns on dilution of AFSPA the Armed Forces Special Powers Act (AFSPA). The Army officers moved the apex court after it had, in 20-16, ruled out the concept of absilute immunity for both the Army and the police.

General Hooda wrote then, “this is perhaps a good time to review the AFSPA. This act has long been criticised by civil society groups as being draconian, but an amendment to the act was strongly opposed by the Army on the grounds that it is an enabling act that provides the required protection to soldiers operating in disturbed areas. This may no longer be true.

Therefore, a new legislation is required that would address the concerns of soldiers as well as strengthen respect for human rights by dealing swiftly with any violation. The action must now shift from the Supreme Court to the Parliament House.”

This would be ---and it does not need rocket science to predict this---his primary suggestion in the AFSPA review he has submitted to the Congress party. He has advocated this strongly in his recently articles, with his ‘take it back to Parliament’ suggestion based on the need to reconcile the military and the human rights bodies on this all important Act that has seen big protests in the North East states and in Jammu and Kashmir.

General Hooda, regardless of the slurs thrown his way by BJP leaders who should respect the uniform, has been categorical in his writings about the rights of the soldiers. As he wrote in an article after the Supreme court ruling last year, “The court observed that even if the victim is an enemy, an inquiry could still be ordered if excessive force is used. With this yardstick, almost every encounter with terrorists could become the subject of an investigation.

There is a simplicity to our peaceful lives that is in complete contrast to conflict situations faced by soldiers on a daily basis.

If terrorists are holed up in a heavily fortified house, the use of explosives to bring down the house could easily be classified as excessive use of force. The alternative to this is to send soldiers to physically clear the house with a high chance that some of them could be killed.

No officer should have to be put in such a situation where he has to weigh personal legal harm against the moral dilemma of putting his soldiers in harm’s way.”

And this is a dilemma, always been for officers posted in Jammu and Kashmir until recently when under the new doctrine, houses of civilians are being blown up with little thought.

General Hooda, in the same article, also tackled the contentious issue of military justice again in the wake of the court ruling that even after the Army had investigated any allegation, investigations by other agencies were not ruled out. This has been a major issue following deaths and massacres attributed by locals to the Army ---like Pathribal in J&K---and the residue remains with a bitter taste in all military-civilian dialogue in these areas.

General Hooda forcefully argued the soldiers faith in the military justice system, stating, “If this faith is eroded by diluting the provisions of the Army’s courts of inquiries and dragging Army personnel to criminal courts, it will adversely affect how the Army operates. It is likely that counter-terror operations will be characterised by caution and a play safe attitude”.

He has stood by the soldier, and yet recognised the confrontation between the military and civil rights bodies on these issues. Successive governments have tried to abdicate responsibility in resolving this confrontation, with the ball passing to the courts. General Hooda has made it clear---and it is this suggestion that he has probably highlighted in his review report---that Parliament should claim responsibility, and enact a new law that accommodates the interests of both sides.

He has advocated a fresh law repeatedly. A law as he said that would “address the concerns of soldiers as well as strengthen respect for human rights by dealing swiftly with any violation.”

The action, as the general had stated, “must now shift from the Supreme Court to the Parliament House.”

In fact the Supreme Court itself suggested as much when it told the Solicitor General, “who has stopped you from coming out with a mechanism? Why does it require our intervention? These are issues which you have to discuss, not the courts.”

General Hooda in his empassioned articles stated, “In my view, the current imbroglio will not be resolved by individuals appealing to courts that are bound to narrowly interpret the law, particularly in allegations of human rights violations. The answer may lie in the advice of Voltaire, the French philosopher, “If you want good laws, burn those you have and make new ones.”

It is perhaps time for the government to look at a new legislation to replace the AFSPA. A legislation that strengthens both respect for human rights, as well as protection to our soldiers who put their lives on the line in defence of the country. To some, this may appear to be a contradiction, but we should remember that the military ethic is itself based on a strong moral foundation”.

Perhaps the Prime Minister and his Ministers need to pause and read, difficult exercise of course. And instead of using Kashmir as personal property, recognise the merit of a general’s argument particularly as it seeks to end confrontation through a new law, enacted not by the Jammu and Kashmir Assembly or the Indian Army but by the Indian Parliament that he is optimistic can rise to the occasion, and right a wrong. And do so by enacting a legislation that addresses both constituents as citizens of the country, with equal rights. 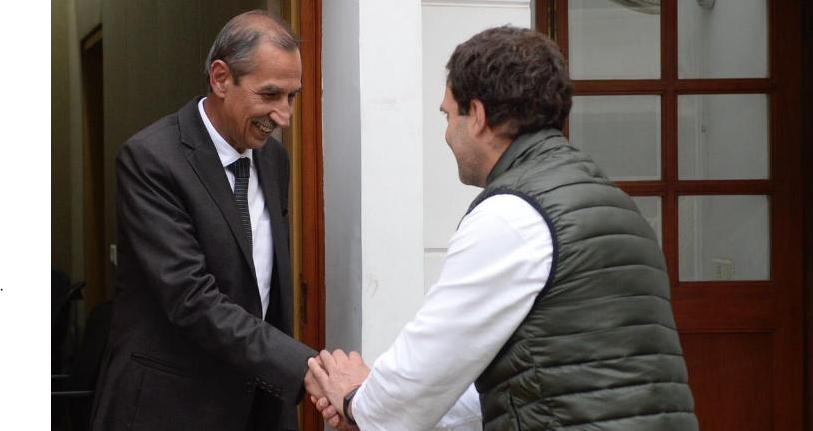