For the authorities they are militants, for Kashmiris their sons

He is unsure which grave in three separate burial grounds in south Kashmir belongs to his rebel son.

Twenty year old Shakir Ahmad Gogjoo was killed in a ‘gunfight’ with government forces in June 2017, barely two months after joining the ranks of militants.

Gogjoo, an undergraduate student, was killed not far from his house along with his two affiliates, Majid Mir and Irshad Ahmad, in an encounter with government forces.

According to the family, the encounter lasted several hours before Shakir Gogjoo and his two associates were killed. 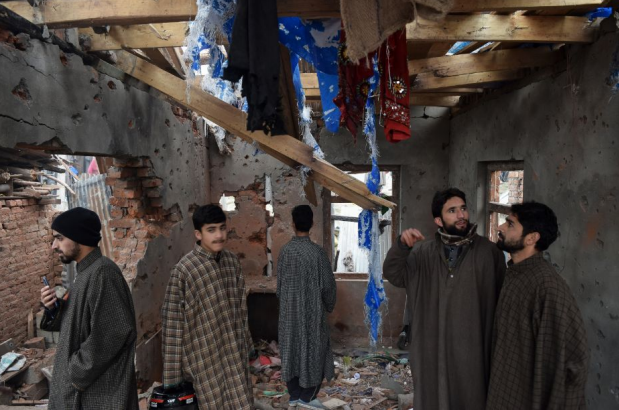 The Indian Army and police personnel overpowered the militant trio, who were not well trained in combat, using an improvised explosive device or IED to blast a residential house where they had allegedly taken refuge.

Gogjoo’s family in Kakapora town in volatile south Kashmir, some 25 kilometres from the summer capital Srinagar, is emotionally drained.

Gloom seems to have taken over, this small sleepy town.

Inside their newly built concrete house Bashir and his wife Shamima Begum, both heartbroken, say the only thing they regret is “We were not able to see the body of our son.”

“After Shakir joined the mujahideen (militants) we knew he would achieve martyrdom one day,” Bashir, who sports salt-and-pepper stubble, says with a sigh.

“We could not see his face. We feel a pang in our hearts. As if someone has plucked a piece of the heart from our body. They killed him, but they should not have mutilated his body. They burned his body.”

The very morning after the overnight encounter, Bashir says he was called by the local police to claim the body of his son for necessary burial.

“I asked them where my son was, they pointed to three shrouds,” he says while consoling his wife whose eyes well with tears.

“Curious, I went closer to the shrouds. When I opened the one believed to be my son’s, there were only bones and burnt flesh. I broke down. I asked them how they identified the body as my son’s. They maintained that it was.”

Shakir’s family and local residents claim that after the three militants, supposedly affiliated with the Lashkar-e-Toiba were killed, their bodies were thrown into the raging fires that had engulfed a house near the gunfight.

“We had no option. We buried the broken bones and burnt flesh in our graveyard,” Bashir, who is an asthma patient, says while smoking cigarettes nervously..

“I can’t say with certainty that the mortal remains we buried in the grave were of Shakir,” he says.

The other two militants killed beside Shakir included one from the same Kakapora locality, while the other hailed from nearby Aghaspora village in Awantipora.

“My husband goes to offer prayers at all three graveyards to ensure that blessing reaches the deceased soul of Shakir,” Shamima Begum says as tears roll down her cheeks.

She says, “The mother of the martyred mujahid from Aghaspora told me that her son appeared in her dreams, told her he was not the one who was buried there, and that he lies buried in Kakapora.”

The only memory which lies safe with the grief-stricken parents are pieces of soil extracted from the grave believed to be their son’s.

“This gives us solace. There is fragrance. It keeps Shakir alive in our hearts,” she says with a sense of pride.

Shakir was killed when Mehbooba Mufti was the chief minister of the Jammu and Kashmir government. It was in her tenure that reports began pouring in about the bodies of militants being mutilated by government forces.

This practice, according to the locals, continues.

However, Mufti has upped the ante against the BJP after it broke ties with her Peoples Democratic Party in June 2018. She accuses the government in New Delhi of allowing the mutilation of Kashmiris’ bodies and deplores the practice.

“Of late chemicals are used during encounters to bring down the target buildings that also leads to mutilation of bodies beyond recognition. Many a time to ascertain the identity of the slain militants DNA tests are the only means,” she says. “This is inhuman and against all ethics. It breeds more hatred and alienation.”

Navigating through apple orchards in full bloom, surrounded by snow mountains and gushing brooks, hardly anyone can believe that beneath the breathtaking natural beauty of Amshipora in Shopian, south Kashmir, lie such tales of death and destruction.

On April 13, 2019 local militant Shahjahan and his associate Abid Wagay, believed to be affiliated with the Jaish-e-Mohammad, were killed in a brief shootout in an orchard at Gahind.

Outside Shahjahan’s home a group of women are trying to console the family. There are no screams. No dirges either. An eerie silence.

The fear was palpable. Everyone refused to talk to us, fearing reprisals from the Indian Army stationed in a camp nearby.

After our unrelenting efforts, a young woman introduces herself as the slain militant’s sister. She begins narrating the family’s ordeal.

“People informed us that my brother was hiding in a local orchard. The Indian Army men came to know about it and cordoned off the area. They martyred my brother and his friend within 15 minutes,” she says, covering her face with a scarf.

For obvious reasons she refused to share her name.

Another sister of Shahjahan says that the family received a call from local police to take the body for burial.

A group of villagers approached the Shopian police lines to fetch the body of the slain militants.

“The whole body was wrapped in a white bandage. The Indian Army had set his body on fire. The men were shocked and were unable to identify the mutilated body.”

According to the family, it was finally the uncle of the slain Shahjahan who identified his broken tooth.

“When the body was put in a small truck to take it home, Indian Army personnel stopped the vehicle at Shopian. On discovering the corpse belonged to a JeM rebel they beat the body, the group of villagers escorting it, and also the driver Mohammad Rafiq. His arm is still broken,” villagers say.

The family kept the body inside the house for only five minutes, “since they could not bear to see the mutilated body.”

“My father (Abdul Hamid Mir) and mother (Tasleema) broke down. They could not see the burnt body of their son. We decided on a swift burial.”

There is no picture of Shahjahan at home. The family alleges that the Indian Army set their belongings on fire in September last year.

“We do not have any memory of his in terms of albums, not a single picture,” says one of his sisters.

“The only memory with us is the terror unleashed on us by the Indian military. We lost everything, our house, our relations, and Shahjahan.”

A questionnaire was emailed to the Indian Army’s defence spokesman regarding the allegations of mutilation of bodies levelled by the families, local residents and a prominent Unionist politician and former chief minister. This story will be updated when a response is received. 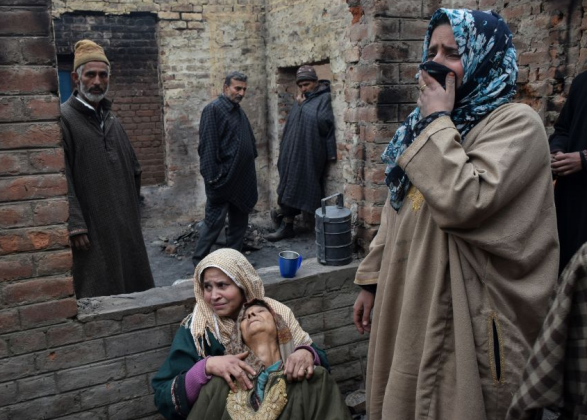