Protesting for a cause

NEW DELHI: Lovely weather on a Saturday morning with Lutyens Delhi swarming with people picnicking and shopping. But outside the Nagaland House, it was serious business. A group of protesters gathered, shouting slogans, determined to send out their message to the Nagaland government, loud and clear

The horrific lynching of a man in Dimapur on March 5 resonated in the heart of New Delhi. The absence of proper action by the state government against the mob who dragged the undertrial out of jail, under the watch of the police, and brutally beat him to death has sent shock waves through the country, reflected in the protest in the national capital.

It was against this appalling, gruesome lynching, against the inaction of the government and against this “conspiracy” that the Jamia Teachers Solidarity Association (JTSA), Jamia Students Solidarity Form (JSSF), ANHAD (Act Now for Harmony and Democracy), Nagrik Ekta Manch and other individuals ranging from students to activists came together.

Carrying a banner reading “Against Vigilantism and Targeted Violence, Ensure Safety and Security for All”, the crowd, though less in numbers, started shouting slogans and registering their protest with great vigour. The slogans ranged from the immediate or the local perspective to the much larger picture i.e. the slogans were varied- from “Nagaland sarkar jawab do”, “Doshiyon ko Saza do” or “ Jail authorities chuppi todo” to the broader “Home Minister istifa do”, “ sampradayawad ki rajneeti band karo” and “AFSPA down down”. 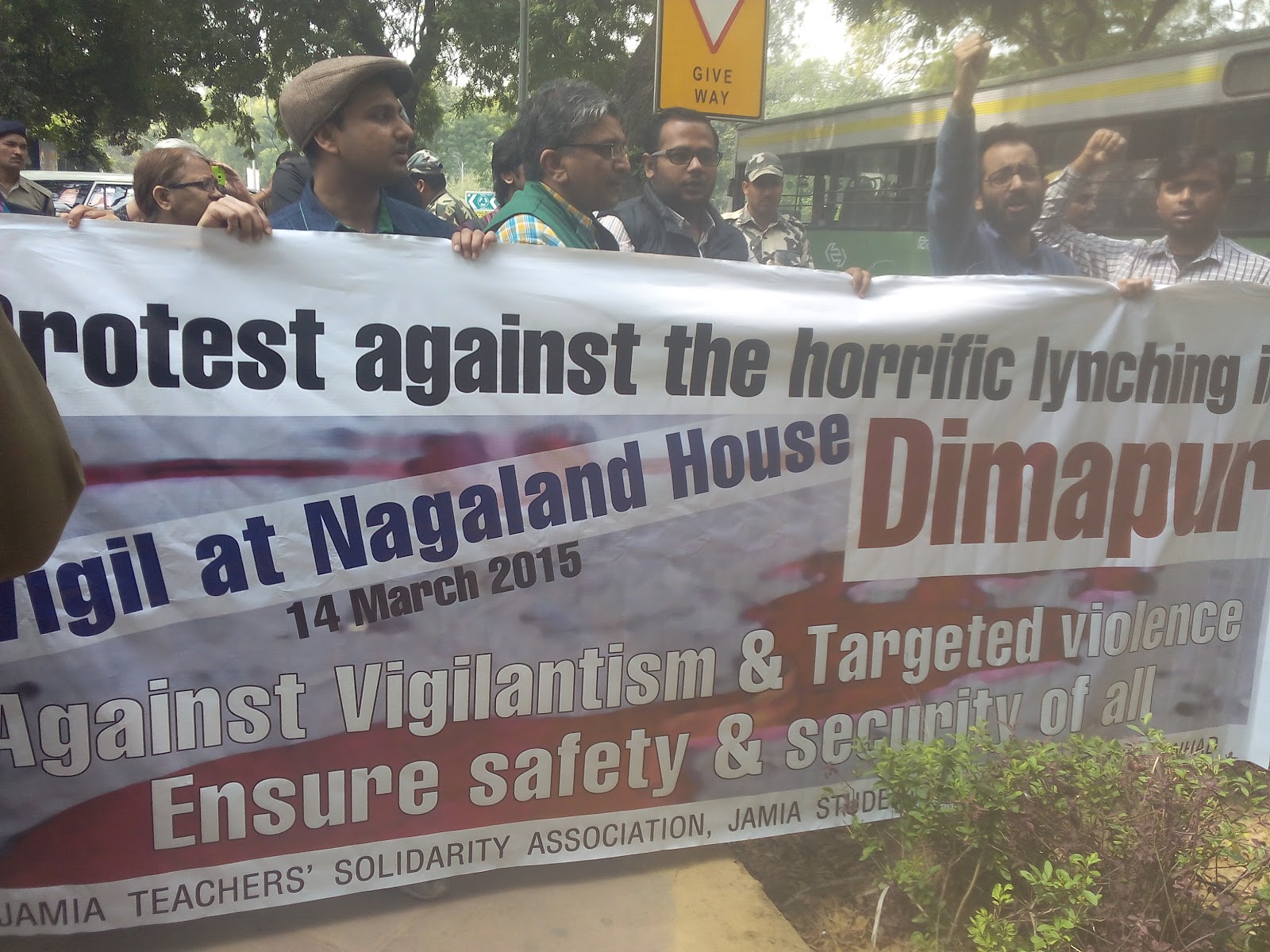 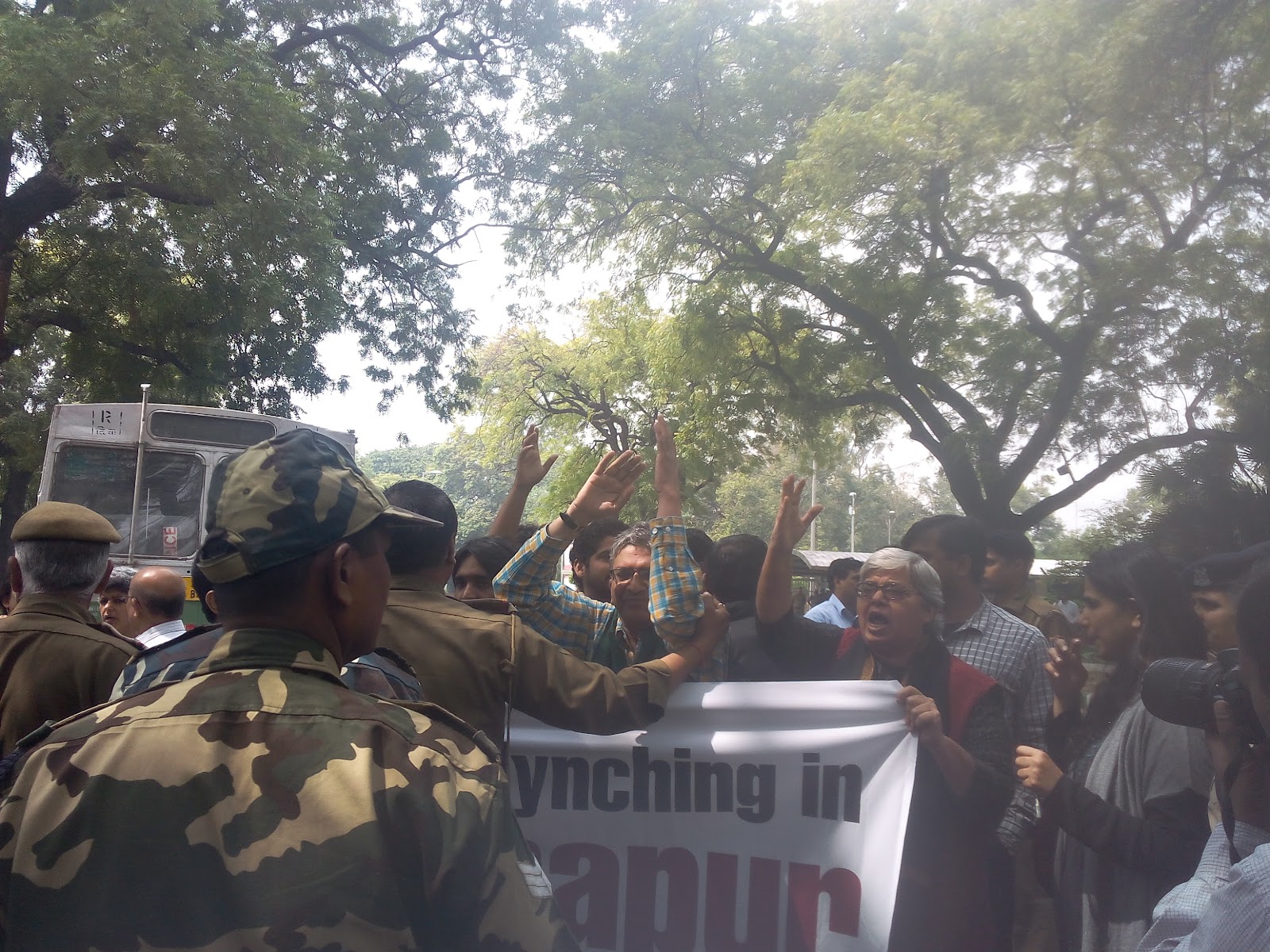 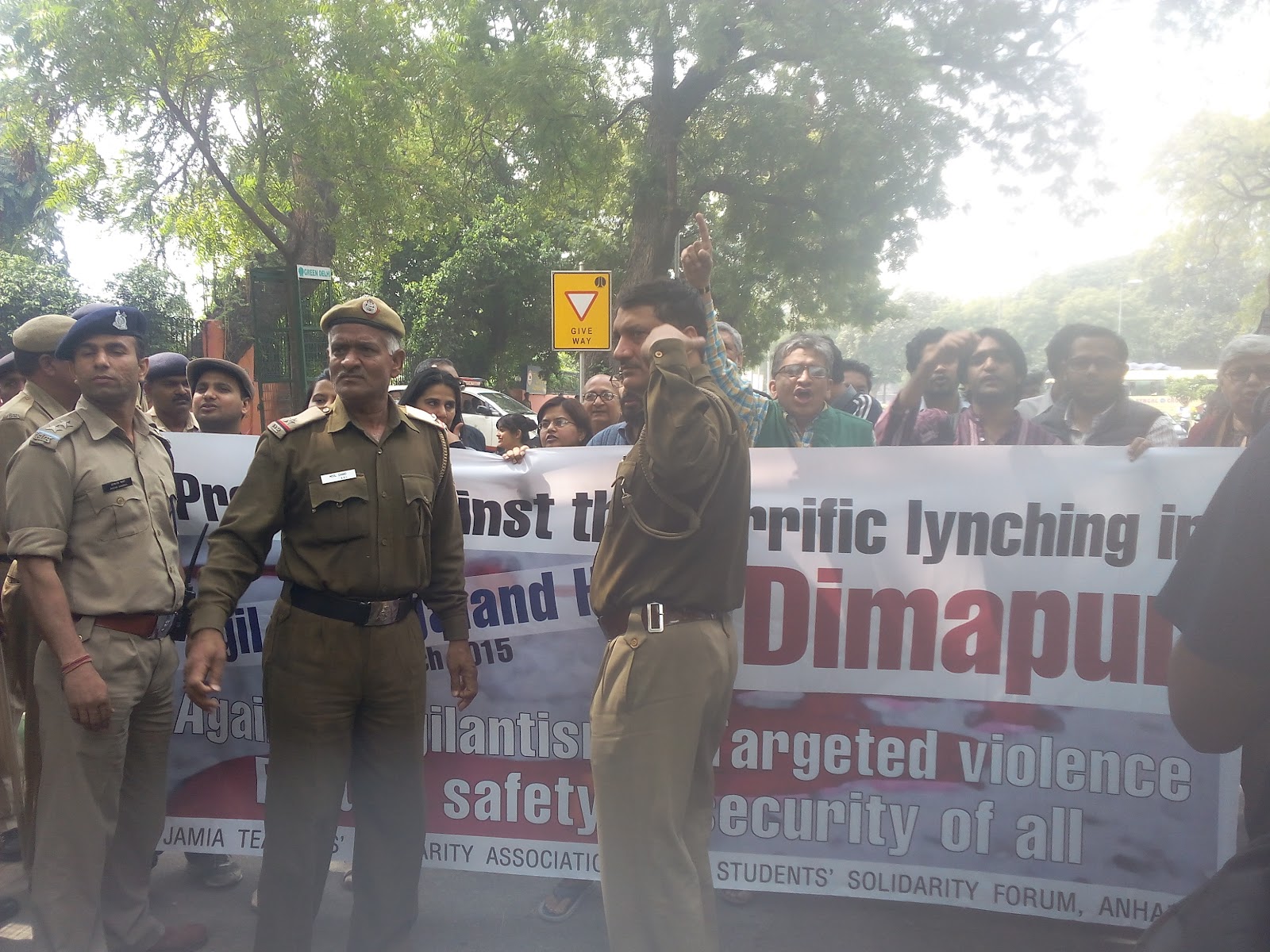 Even though the number of people were not too many, nor were they being violent in an way; the barricades were multiple and several troops of police personnel who had made full preparations to handle the protesters. (A bus was standing by to take the peaceful demonstrators outside the area). The group of people shouting slogans were walking towards the Nagaland House but only to be stopped by the police. 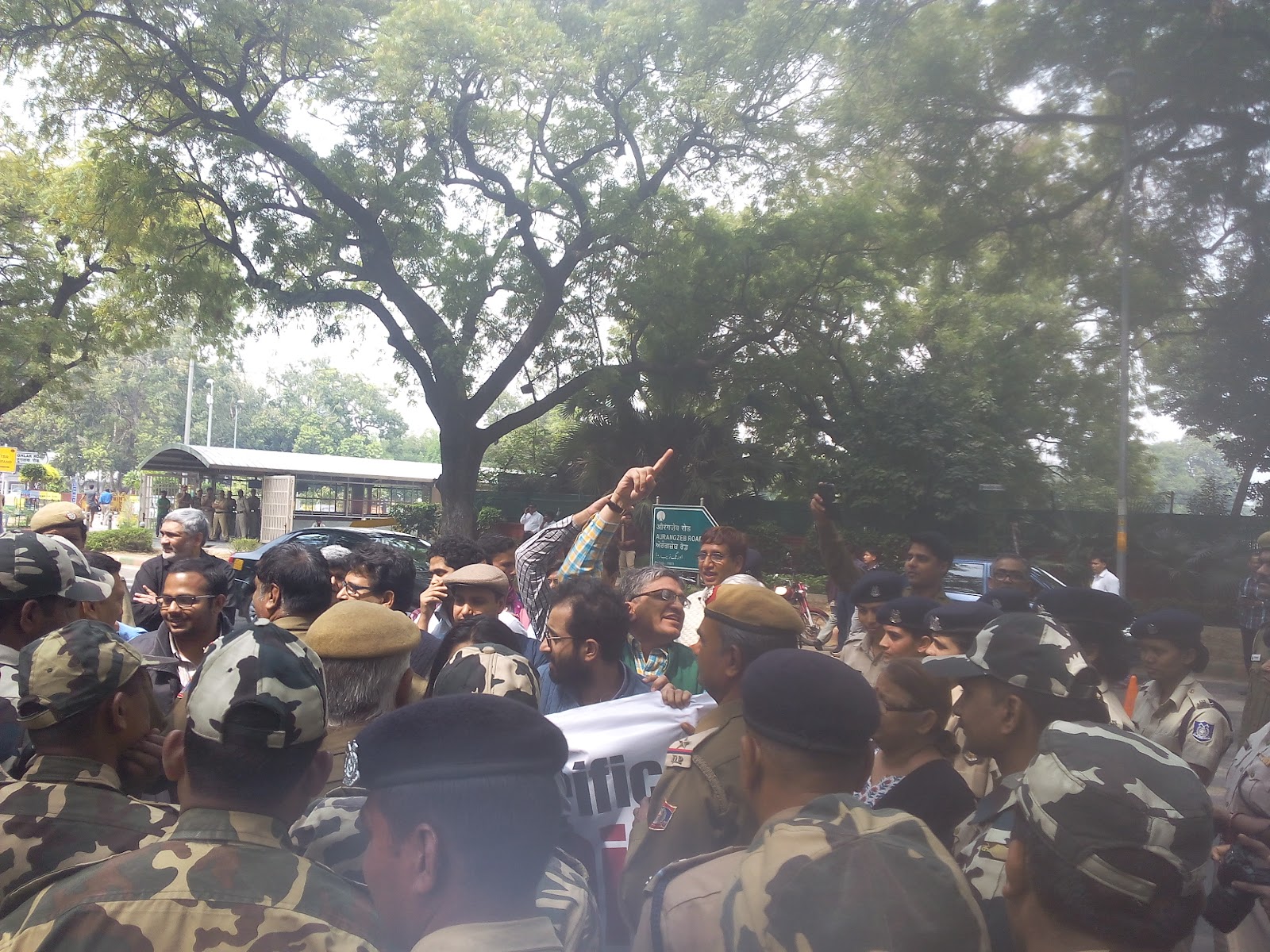 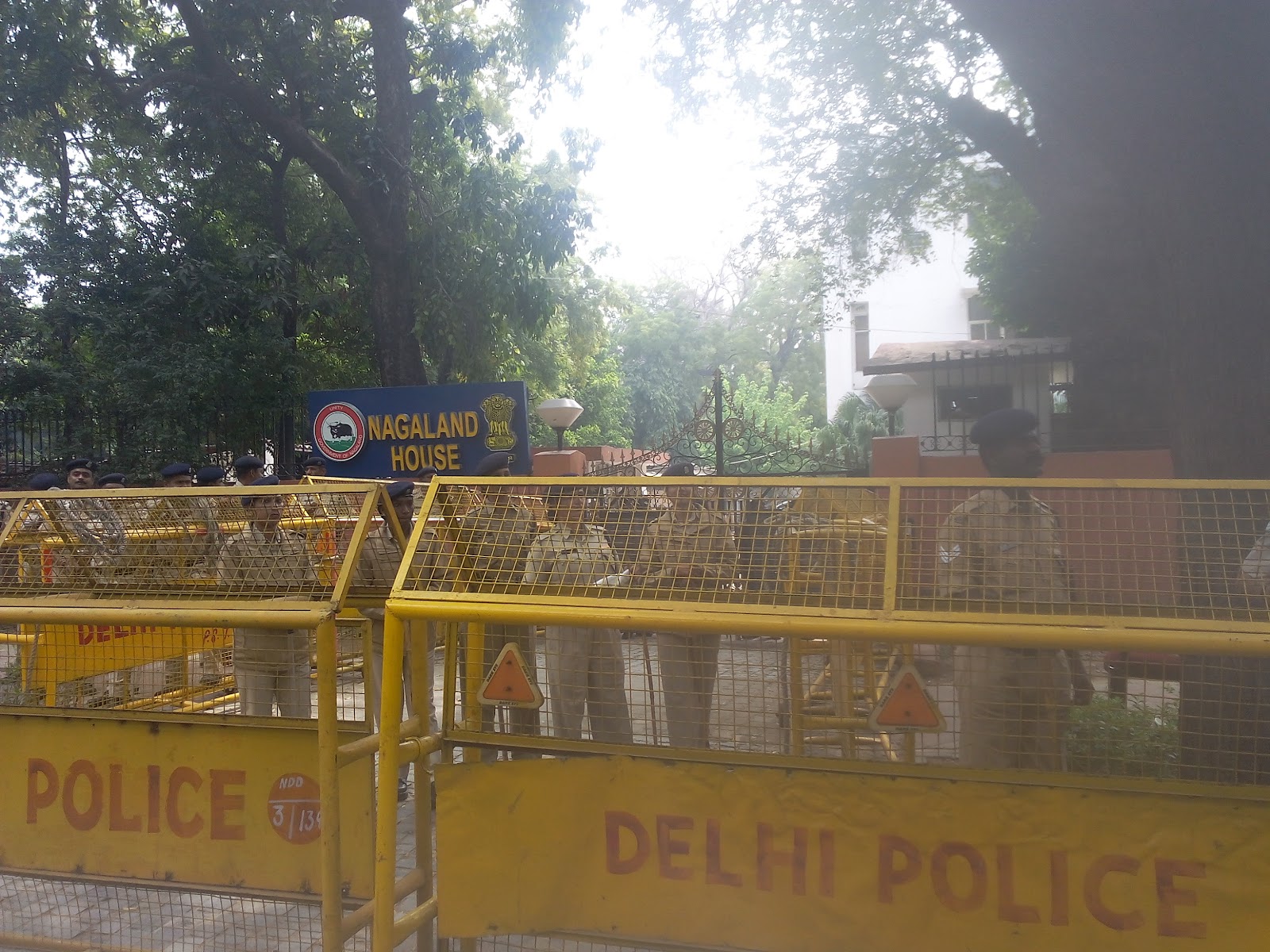 The kind of security that was present here made one wonder how could a mob of only hundreds not just enter the Central Jail in Dimapur but even manage to drag Khan out of it, beat him and hang him in the presence of so many police personnel who were mute spectators to the horrendous lynching.

Abhay Kumar, a PhD student of JNU was one of the most avid protesters who could be seen shouting slogans throughout at the top of his voice. While talking to The Citizen, he said that besides protesting against the lynching and the government, he was here to make a very important point.

“How can one believe that suddenly a mob enters the jail and the police couldn’t stop them? Are we living in a jungle raaj? It was not at all spontaneous, it was a carefully planned incident. It was maybe a part of the larger design, and this is a political design”, Kumar said, adding “You see the accused was a Muslim and we know how the BJP and the RSS are trying to become an influential power in the region.So, they are trying to create a rift between the muslims and the non-muslims, between the muslims and other minorities. We must look at this lynching incident politically”.

Most of those present agreed to the “conspiracy” angle and spoke of the larger picture being missed completely.

Amamul Haque, a resident of the Karimganj district of Assam (the same place where Khan lived) had more to say. He said “ The PMO and the Home Ministry was informed on March 4 itself that the situation was turning grave. Then why was it that on March 5, even Section 144 was withdrawn?”. Haque added “The FIR was filed on February 23, then how was it that mob suddenly entered on March 5?”, “ There is a political angle to it”, he asserted.

Rafiul Rahman, another protester had another point to make. He told The Citizen how it feels to be a Bengali Muslim since he himself is one from Assam. “Every debate around the riots or any violence between the locals and the non-locals in the north east, particularly Assam is always reduced to the illegal Bangladeshi immigrants. Anybody coming from outside that local village or region, is a Bangladeshi immigrant. What about the people who are not Bangladeshis? This growing trend of ethnic exclusionism in the north east is dangerous”, he stated.

Rahman added “The national media only adds fuel to the fire. Arnab Goswami, during the 2008 clashes in Assam had publicly announced that the clash was between the local Bodos and the illegal Bangladeshis”.

There were many others from the north-east region holding placards demanding justice and a proper judicial probe stating how the rule of the land must be upheld. 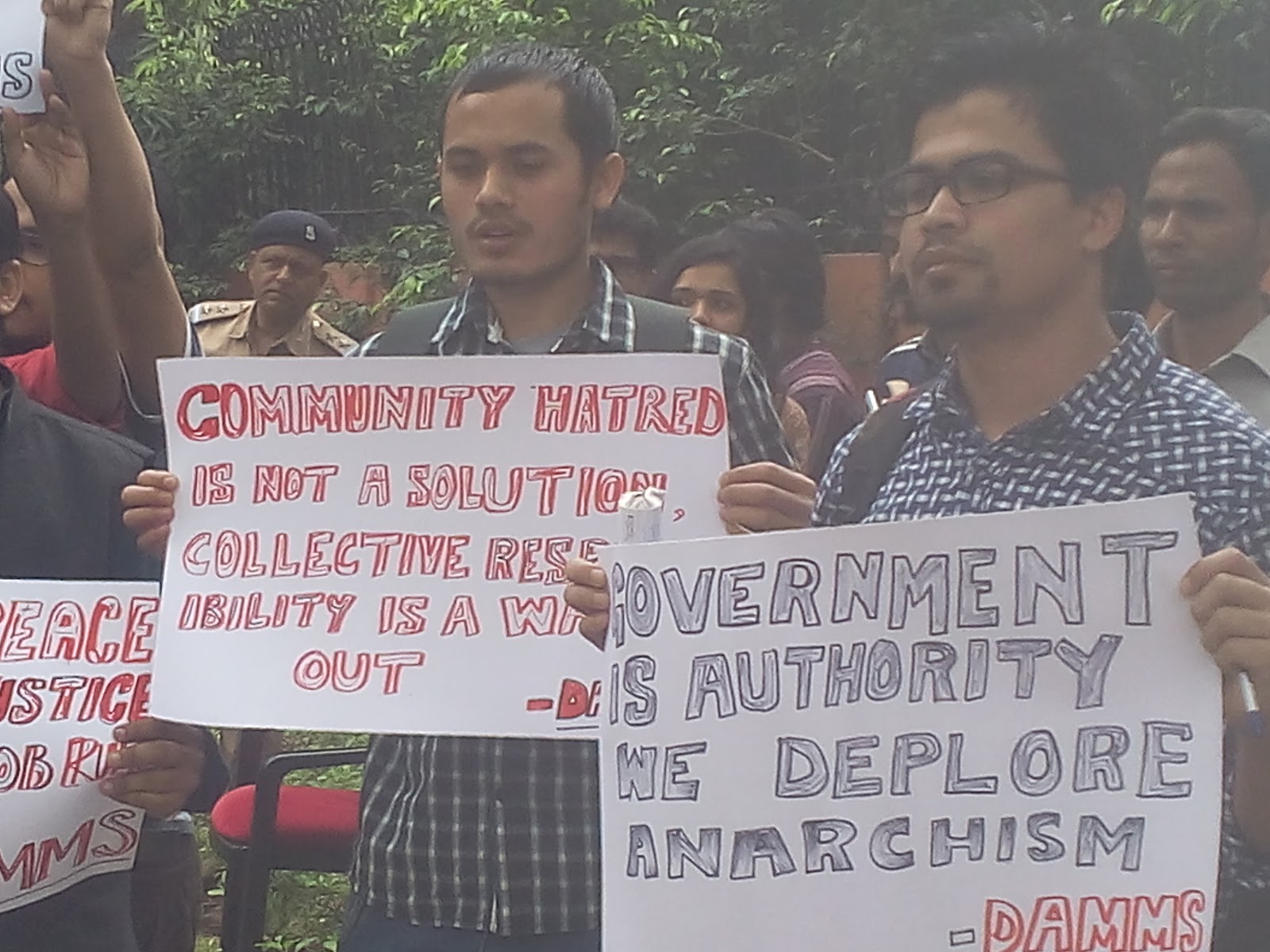 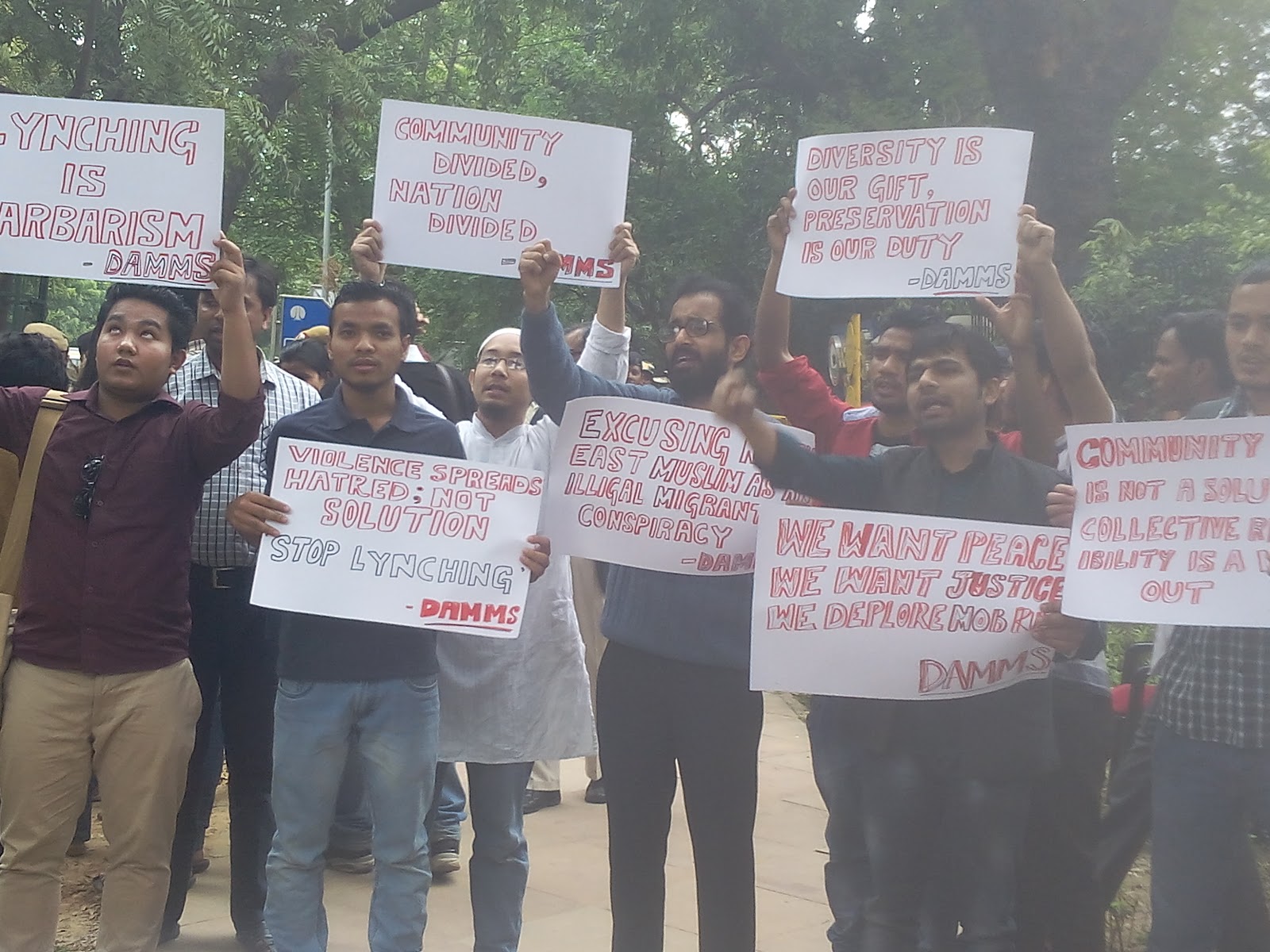 Manisha Sethi of JTSA, one of the organisers told The Citizen how nobody is talking about the build up to the final mob lynching on March 5, which was very obvious. “ We are picking on the minorities- be it Africans, Muslims, North-easterns and later,we create minorities and then pick on them, for instance the Biharis or what happened in this case. Where are we heading?” she asked.

She further informed that all those present signed and sent a memorandum to the Governor of Nagaland wherein they have demanded a high level judicial probe, prosecution of the perpetrators of the crime, compensation to be paid to the family of the slain man and holding jail and local civil administration accountable.

It is unclear what the government- both the state as well as the Centre would do or not do in the coming days, but given the present scenario and the manner in which things have turned out, it appears there was certainly some “conspiracy” and planning involved and the public is being fooled. The students, activists, teachers who went for the protest are waiting for answers, and so is the rest of the public. But it does not seem that these will be forthcoming.