SRINAGAR: Kashmiris have been agitating for the withdrawal of the Armed Forces Special Powers Act, as a draconian law that gives the Army the impunity to cross the barrier of laws and conventions into violations of human rights. The Army has been clear, as have been successive governments in New Delhi, that it will not agree to ‘cleanse’ Jammu and Kashmir of terrorism until and unless the soldiers are ‘protected’ by AFSPA.

In the midst of this debate weighed heavily on the side of the Indian Army, the Kashmiris have suffered. This has been acknowledged by fact finding reports, by political leaders and chief ministers of Jammu and Kashmir, by at least 14 political parties in different parts of India that have now officially demanded the revocation of AFSPA but to no avail.

Well known French photographer PAUL WILSON who has recorded his travels across the world with amazing photographs, has captured the human rights violations in the Valley with these photographs and testimonies from the victims. The Citizen, as part of its commitment to the truth as it is brings you this amazing photo essay: 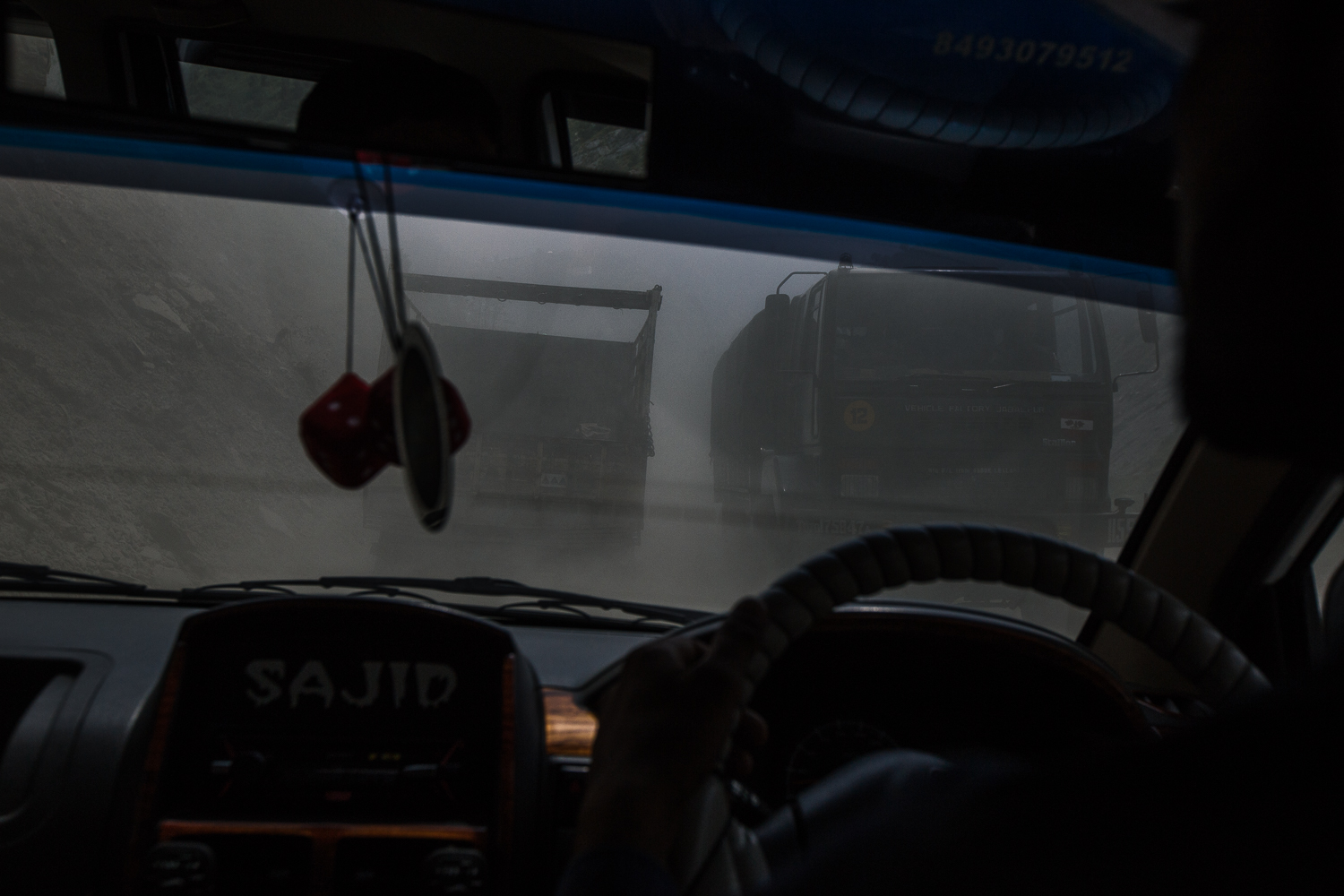 (Military trucks on the highway between Jammu and Kashmir).

According to the South Asian Terrorism portal, over 50,000 people have died in the conflict in Kashmir since 1988. Unofficial figures place the casualties at multiples of the above number. Further, the impunity of the security apparatus has contributed to the enforced and involuntary disappearance of over 8000 persons and the disclosure of over 6000 unknown and unmarked mass graves. The figures, in all probability a major underestimation, reflect on the scale of the vast human rights tragedy that has plagued Kashmir. 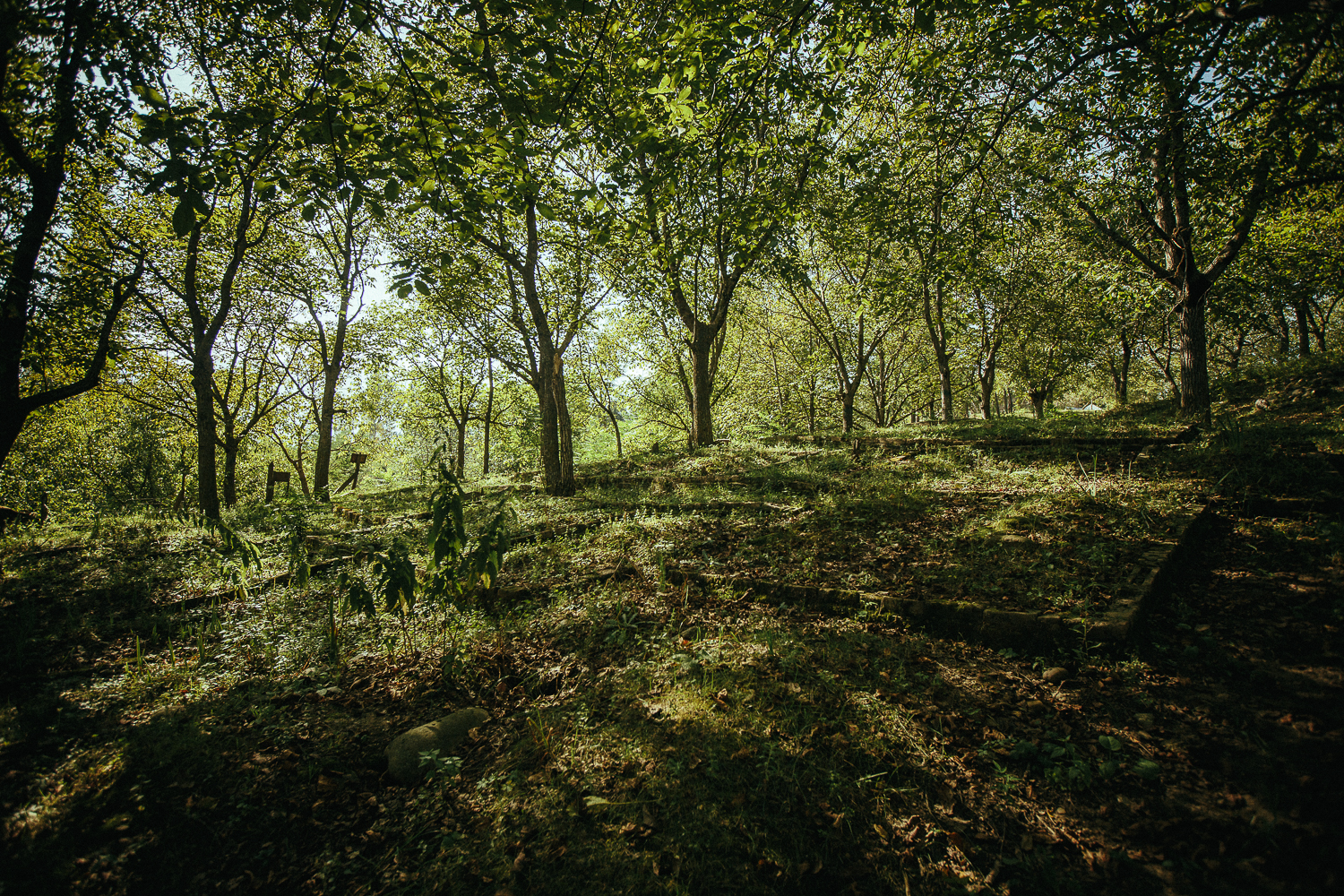 The official account, related by the Indian and Jammu and Kashmir administration and security apparatus, states that the dead buried in the unmarked graves are unequivocally “foreign militants/terrorists.” The perception in Kashmir is different. Hundreds and thousands of people have lost a loved one -- a brother, a son, a father, a husband, with the latter leading to the prevalence of “half widows,” women whose husbands are missing but not confirmed dead.

Human rights organisations have repeatedly criticised the culture of forced disappearances in Kashmir, maintaining that a majority of those killed were targeted in “fake encounters” -- a term used to refer to the police or armed forces killing suspects when they are either in custody or are unarmed, and then claiming to have shot them in self-defence.

Stories of disappearances, encounters, death and violence characterises every day life in Kashmir. Here are some personal accounts from Kashmir. 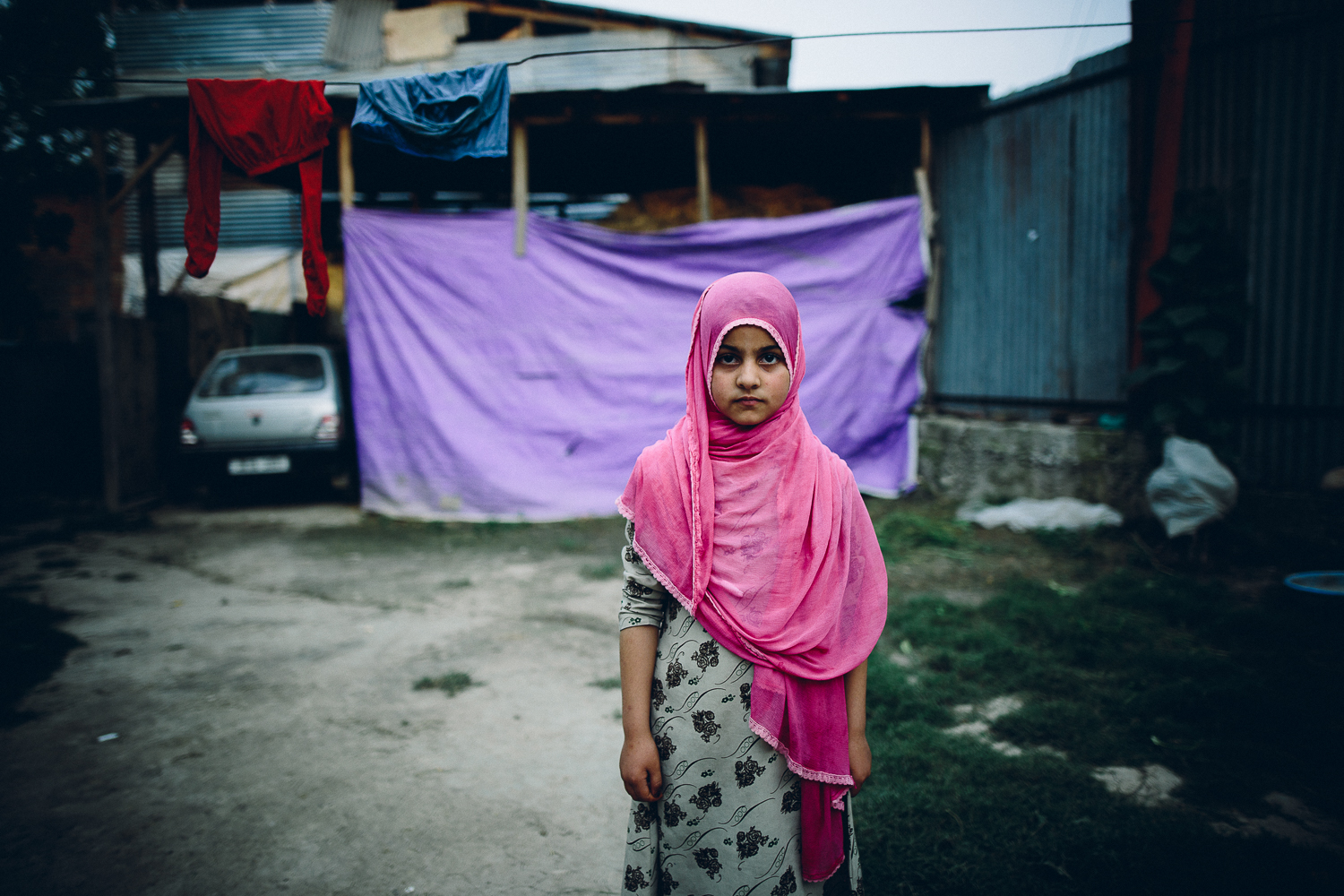 “My brother Adil was 13yrs old. He had gone to the neighbouring village to see a pro-freedom demonstration when Indian forces opened fire to break the peaceful protest. Later my mother received a phone call from the hospital informing her that he was wounded. A few moment later we received another phone call, this time to tell us that he had been killed. The doctors said that my brother was dragged from the bed and shot twice in the neck and back by the military inside the hospital.” 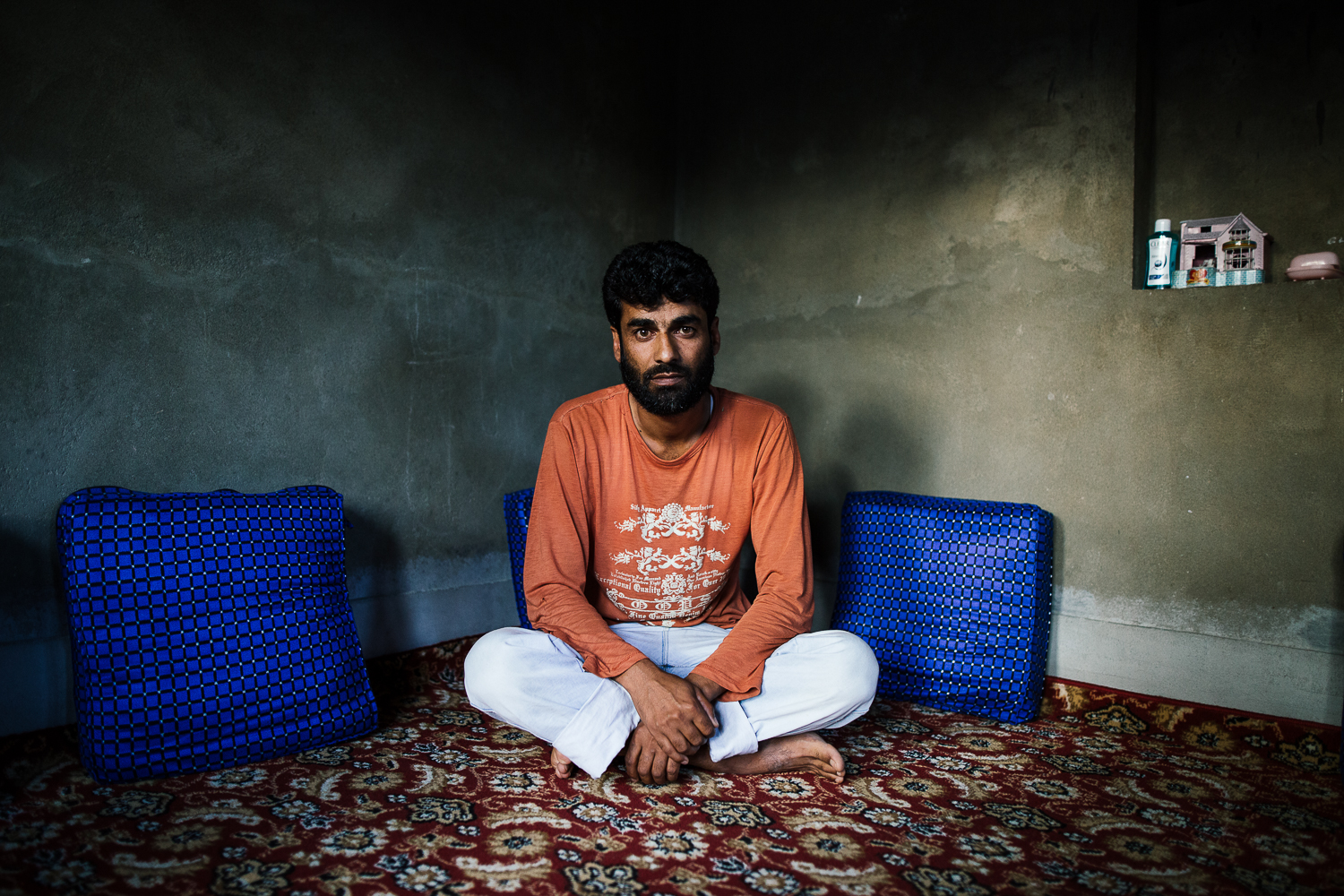 “Early one morning 2 armed men entered my house. They asked for food and sat there all day. They were militants. In the darkness of the evening they left. My family was stressed. The next morning in the first light, someone knocked on the door. My elder brother answered the knock; was the army and police. They asked us where were the militants. We told them what had happened and gave their description. They took me and my brother to the interrogation centre. There they put me naked in front of my brother and beat me with bamboo sticks on the legs. My brother begged the police officer to not beat me on the head because I was suffering from neurological problems. That's when they started to beat me on the ears, clapping their hands like a musical instrument. I was unconscious after an hour. The next day I woke up in the police hospital. I had head pain. Both my ears were swollen and my legs double their size. I was put under observation and suffered from internal bleeding. Since then I cannot hear anymore from my left ear.” 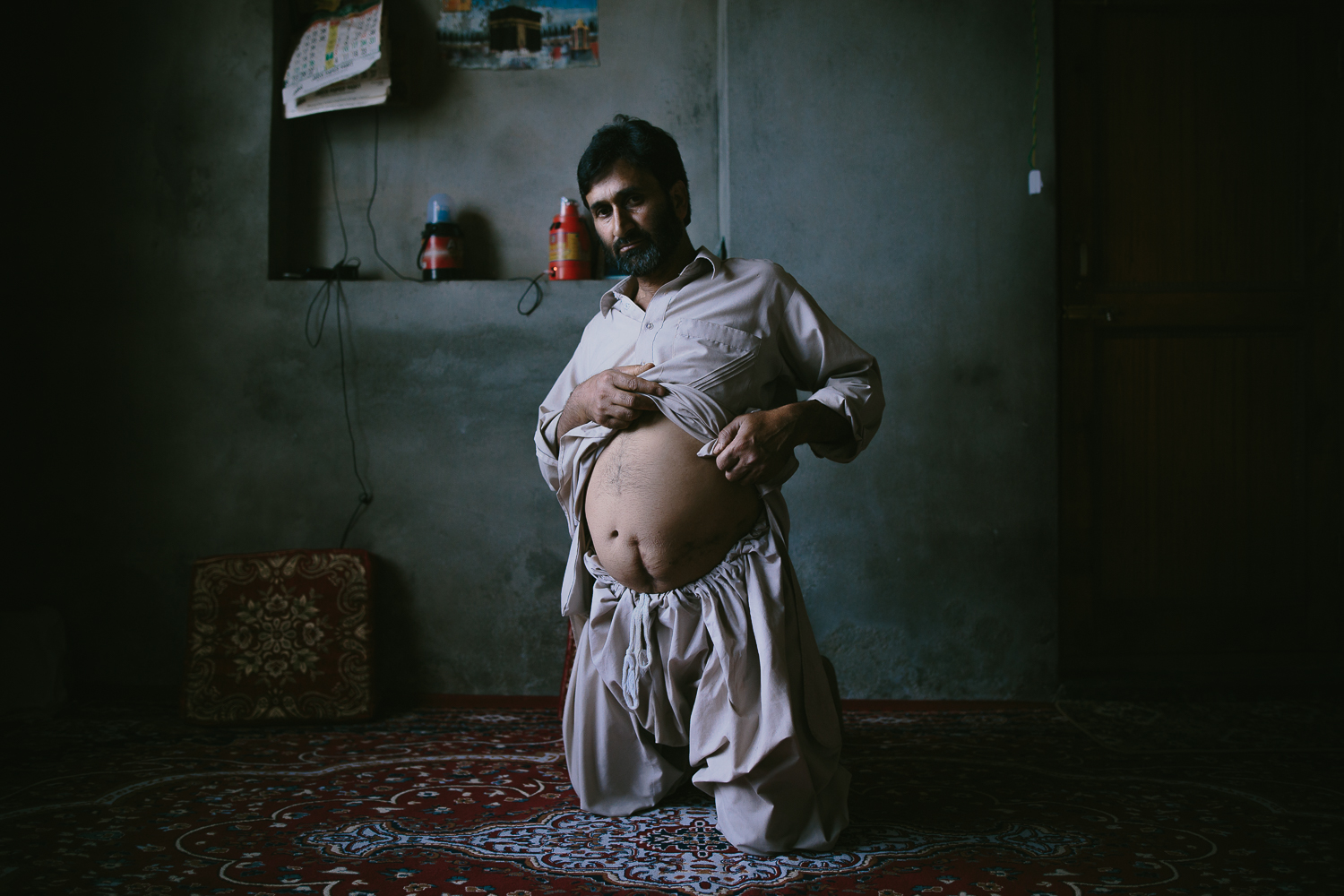 “One day in 1990, the army came and asked all the men of the village to gather at the school. One major of the army asked me my name and brought me to a room where four soldiers were waiting. They removed my clothes, they tied my arms with ropes. They then tied a cloth on my penis and set fire to it. They then inserted a wooden rod in my anus. For an hour they repeatedly asked me ‘where were the weapons?’ People outside the room started to protest at the school against my detention. That is when they took me to my own house to repeat the same treatment. They forced me to drink around 5 litres of dirty water while sodomising me with the rod. They questioned me again and I repeated that I was a shopkeeper and that I had never held a weapon in my life. They took me to the next house and used an electricity wire to shock me all over my body. When we left the first house I saw that a young-man that they were questioning had died there. After throwing me on the floor one soldier stepped on my neck with his shoe and asked me to show him where the weapons were or he will suffocate me.

I could not breath or talk anymore and signalled to him with my foot. He released my neck so I could speak and repeat that I had nothing to do with the militants. One soldier took his helmet and started beating me with it on the chest. Another soldier asked him to stop the interrogation because I was nearly dying. One officer came to the room, they told him that they didn't find anything so they took me back to the school. The beating and torture lasted around 9 hours. At the school they were at least ten boys in handcuffs. As I couldn't stand anymore, the soldiers left me lying there on the floor. A few young guys helped me back home. There was a curfew that night so I couldn't get any medical treatment. My rectum was bleeding all night. In the morning my relatives came to my house and took me to the hospital. The soldiers tried to stop us but my neighbours and relatives protested and I finally could make it to a hospital in Srinagar. They kept me 40 days under treatment. I underwent major surgeries because my colon was ripped. After one month of being released from hospital, the infection came back. They operated on me again to remove a part of my colon. For 22 years my stool came out of a hole in my stomach.” 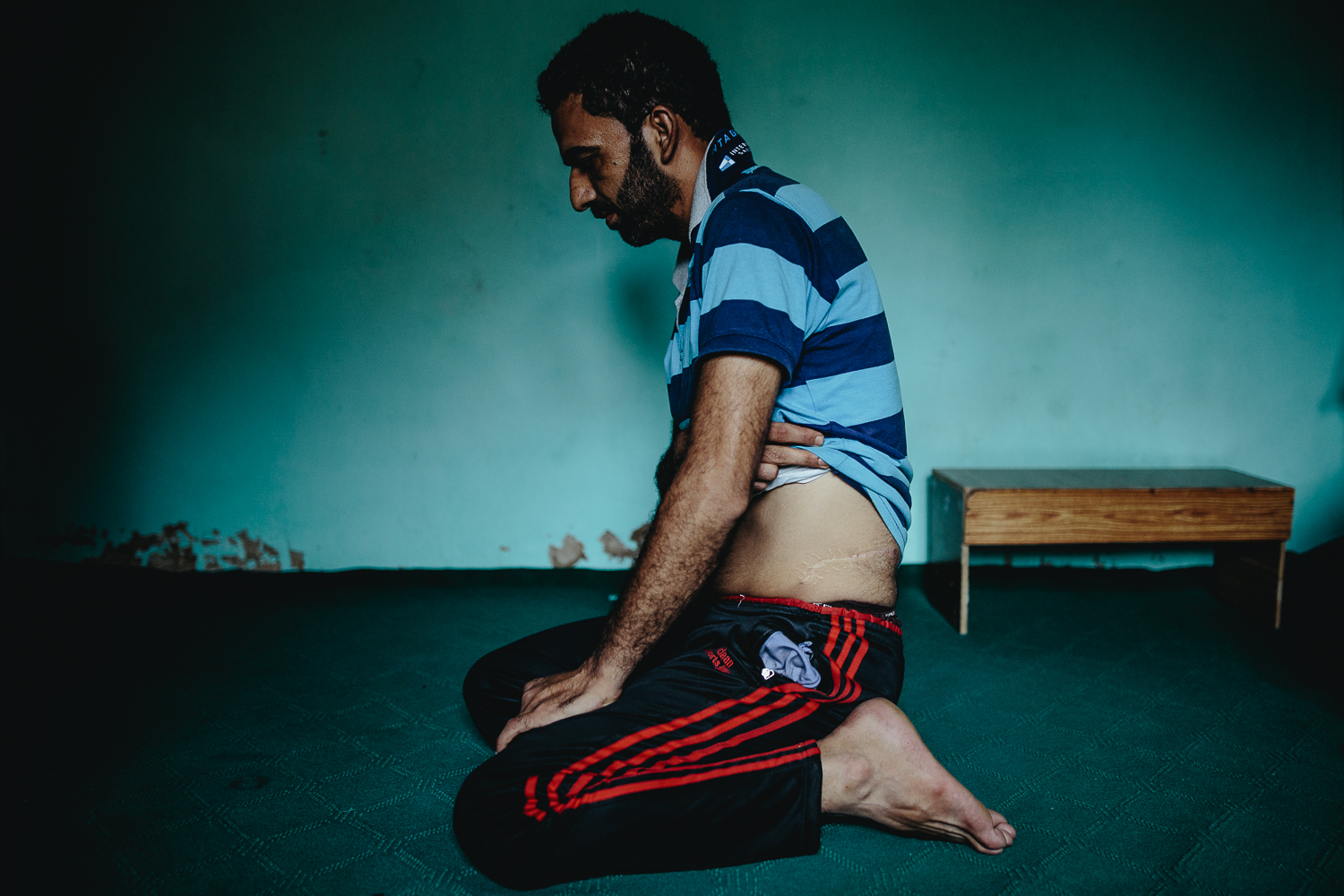 “Before the celebration of Eid, I stepped out of the house to buy groceries. That is when an army patrol saw me. I felt a burn in my back and fell on the floor. I was shot. Then the patrol rushed to me and started beating me while I was lying on the floor. When they thought I was dead they left me there. Two weeks passed. I was still recovering when my brother was shot by the military while stepping out of the mosque after prayers.” 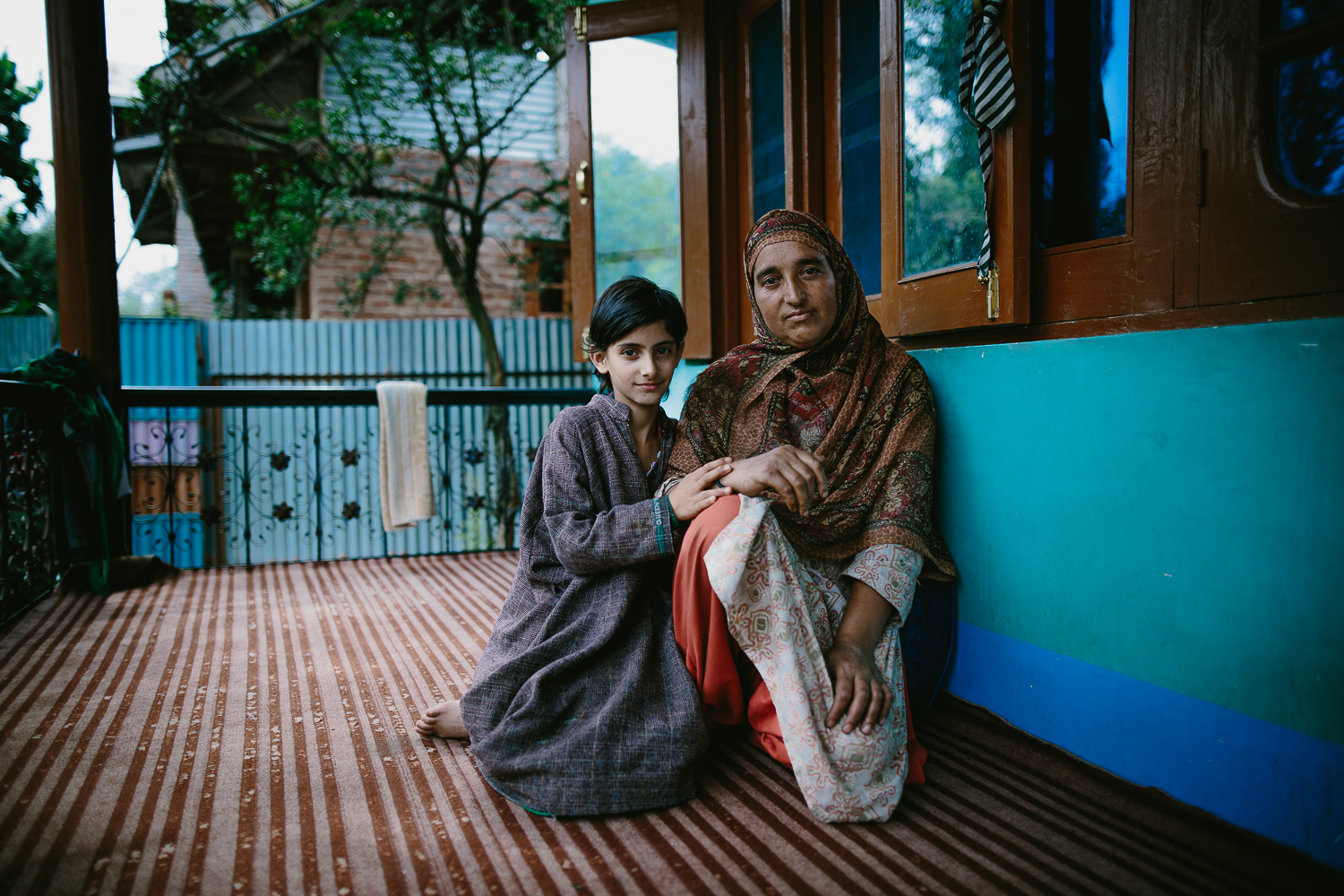 “The Indian army along with the local police stormed my house at around 1 am in 2010. They said they were looking for armed militants but they shot and killed 5 members of my family and shot me 11 times with AK47s. Once they left, I had to walk 200 meters to seek help from my neighbours. My arms and upper body are cribbed will shot wound scars.” 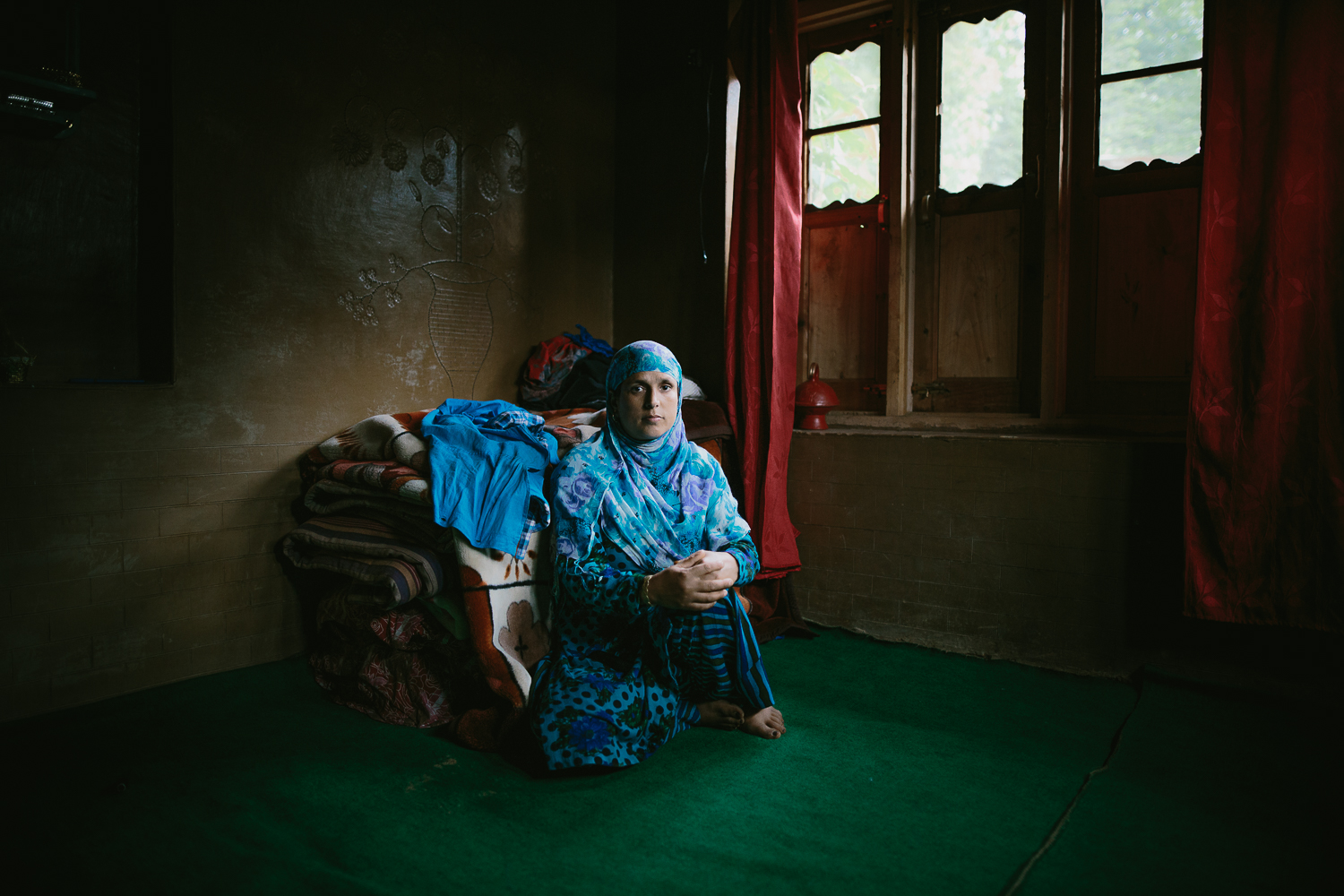 “My children were playing outside of our house when an Indian army patrol entered the street and started shooting randomly. My husband rushed outside to protect the children. He was shot four times. I found him lying in his blood right outside our door.” 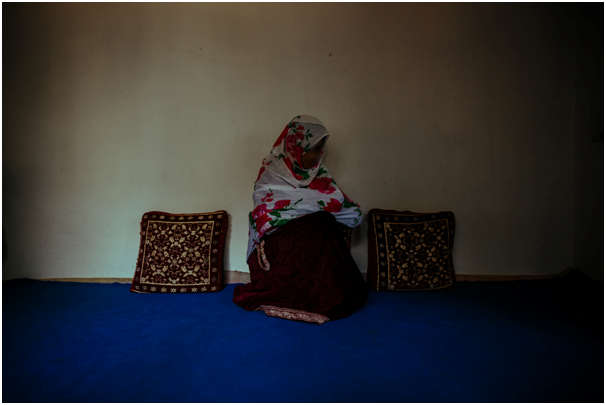 “One night during the winter of 1991, the army came to our village. They asked all the men to come outside of the houses. We could see military all over the place. They took all the men into different spots of the village and tortured them. A group of soldiers came inside my house and raped me in front of my children. When they were done I was in a very bad condition but they installed a curfew that lasted four days where we couldn't leave our houses. Finally after seeking medical help, because of an infection, they removed my ovaries. Today I take antidepressant pills which cause me stomach aches.” 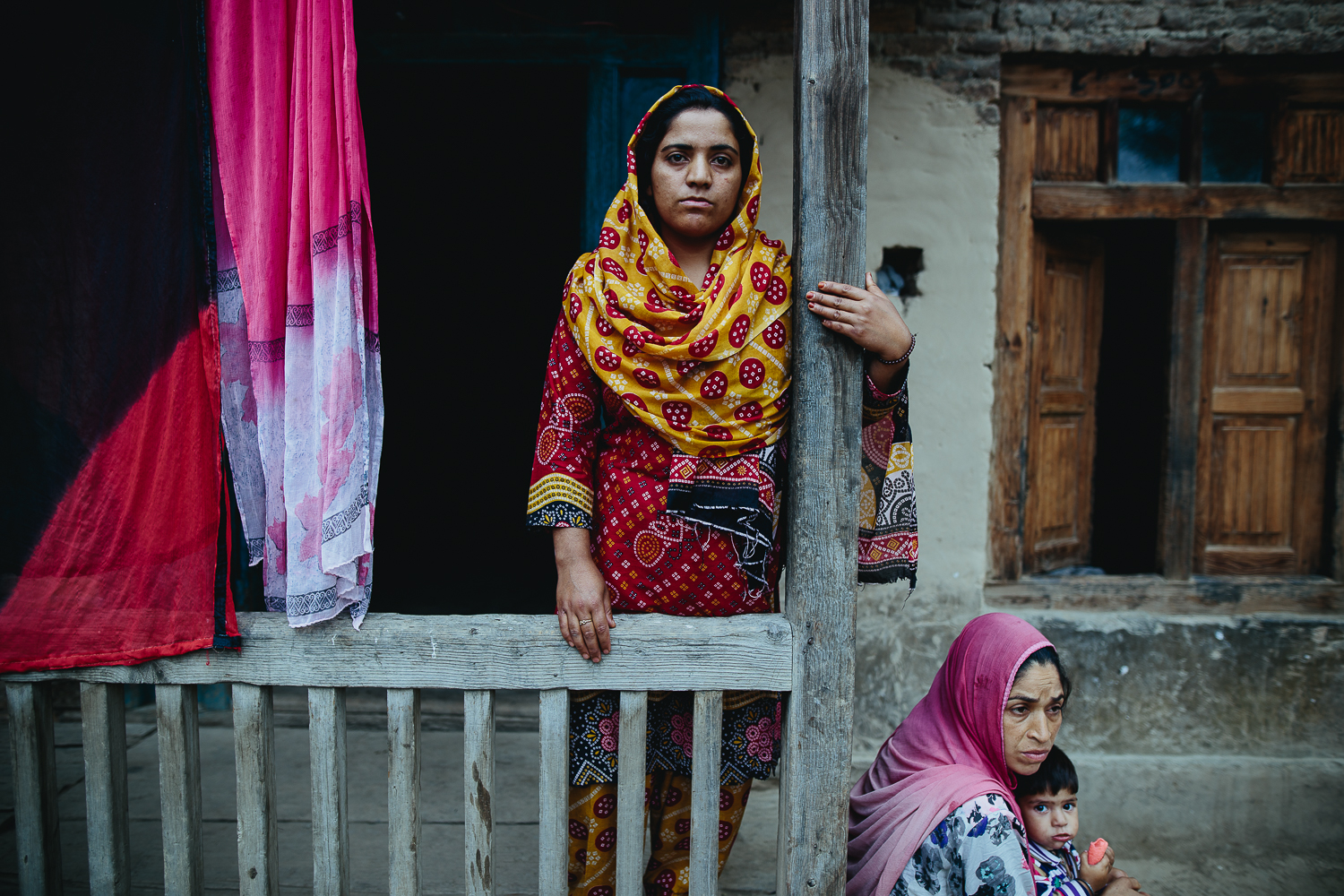 “I was 21 years old when my brother was shot by the Indian army in front of our house. He was simply going out to shop for food. I found him lying on the floor crying for help only a meter away from our door. He died 10 minutes later. No justice or explanation has been given to us.” 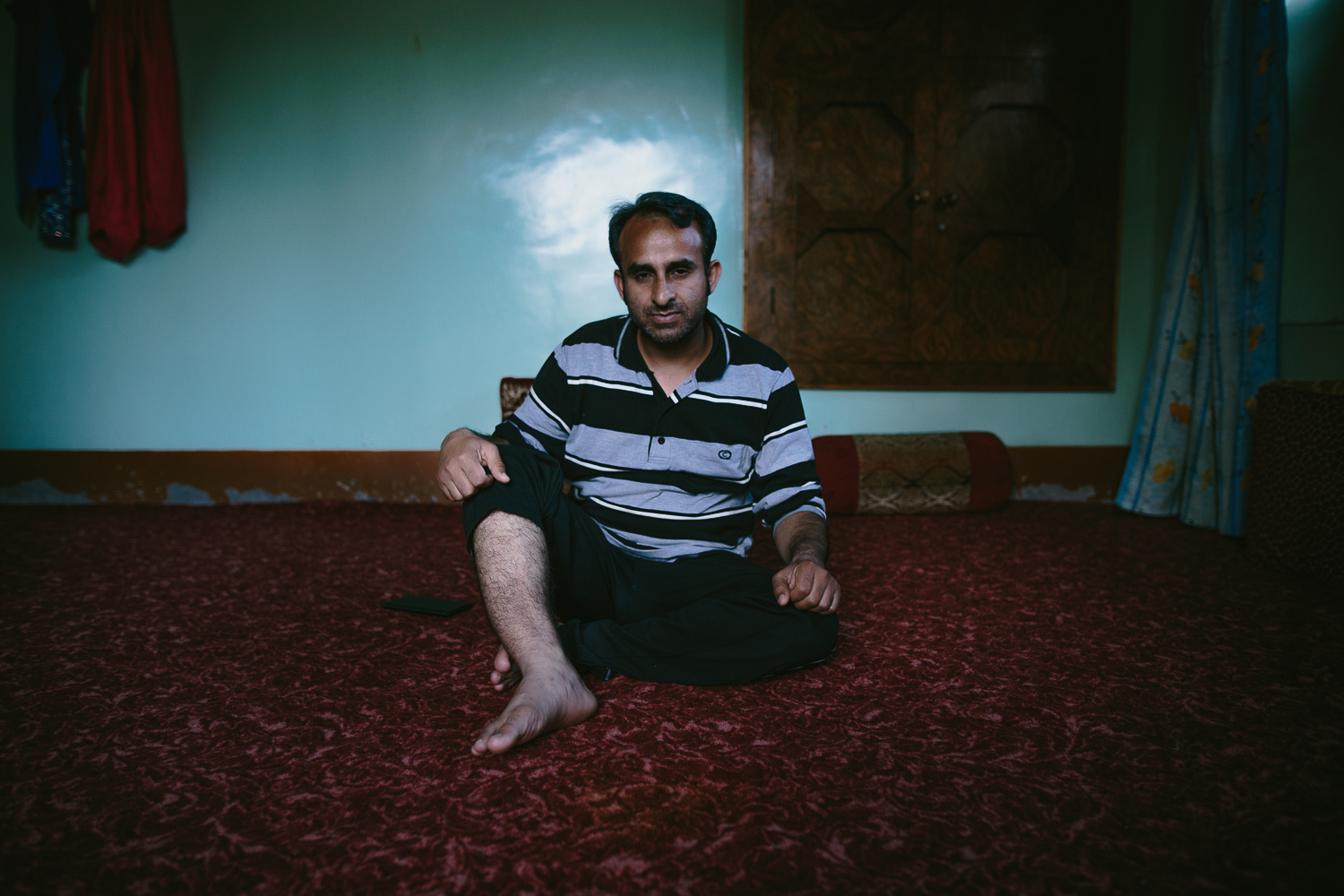 “September 6, 2010, I was on my way back from the office.That day there as a protest on the highway near by because the army had killed some innocent people in a nearby village. They fired in every direction. 4 people died on the spot; about hundred people were injured. I got shot in my leg. I was admitted to the hospital for one month. For a year, I couldn't walk. The first surgery failed and after two years they managed to fix me and I can walk again today. No police have been convicted. When someone tried to go and complain they were put behind bars and tortured.” 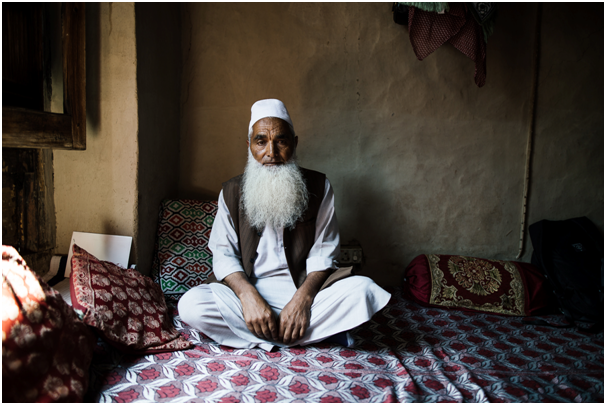 “I spent at least seven to eight years in jail for my participation in protests. In 1996, they drove three other detainees and I to the river. There they killed two of my friends in front of my eyes. I was taken to different interrogation centres where they used all kinds of torture treatment on me. I have been subjected to electric shocks on my private parts; they hanged me completely naked to the ceiling to beat me with sticks; they passed heavy rollers all over my body; they made me drink liters of dirty water in one go. My wife and brothers have also been detained and tortured. I have never held a weapon but I haven't kept quiet about our right to self determination.”

Clampdown, is a familiar word in the Valley with curfew routine in Kashmiri lives. Protests, firing, curfew, arrests, snapping of mobile and internet services, with the Army and Paramilitary taking over the affected areas. The new generations remain alienated, with frustration and anger now defining emotions. According to a 2011 survey, 48 per cent of the Kashmiri youth is unemployed. About 70% of its 10 million population is under the age of 31. They have inherited the sense of injustice and discrimination, added to by the events of and post 2010, the year in which approximately 118 young people were killed in police firing across Kashmir.