SRINAGAR: In the bone chilling cold of ‘Chilla-i-Kalan’ (the 40-day long period of freezing temperatures) in the Kashmir, the people witnessed fast-changing political developments on a politically charged weekend.

Although all major Congress leaders maintain on record that Sonia’s visit was “totally apolitical” and to “offer heartfelt condolence and sympathies” to the bereaved Mufti family, there is also a chitchat about a “letter of support for government formation having been offered by Congress to the PDP”.

There are reports, which no one is willing to officially confirm, that Congress leader Ghulam Ahmad Saroori had actually “handed over a letter of support” on government formation to a senior PDP leader. 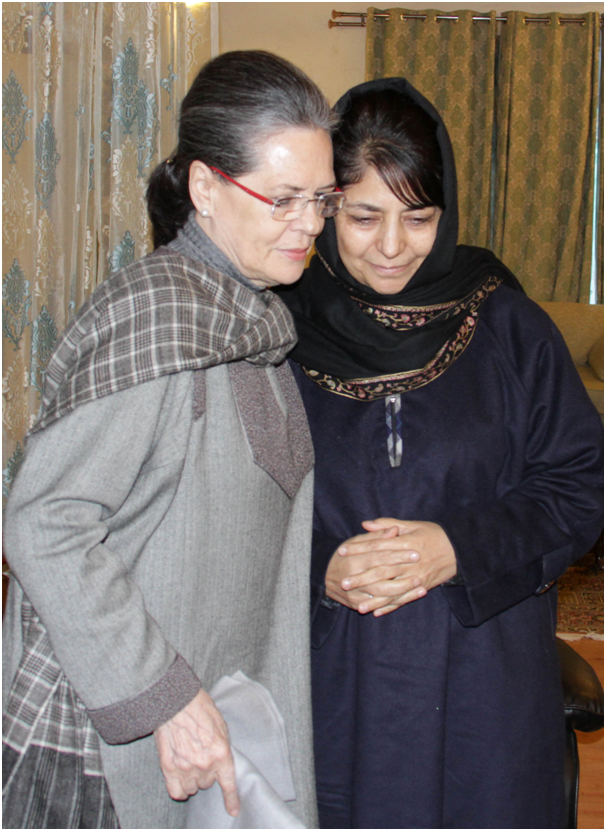 On Kashmir’s turf, the late Mufti Mohammad Sayeed was, by and large, perceived as the “loyal Congressman”.

Senior most Congress leader in Jammu and Kashmir and former Union Minister Saif-ud-Din Soz also told TheCitizen that Sonia Gandhi came to Kashmir only to “offer condolence to Begum Mufti Sayeed and her daughter Mehbooba Mufti.”

After Mufti Mohammad Sayeed’s demise on January 7 at the AIIMS in New Delhi, it so seems that someone has “turned the clock backwards” in Kashmir and thrown the restive Himalayan region back to political wilderness and uncertainty.

That implies, Kashmir is back to square one: there is suspense about the government formation, speculation about portfolios in the new cabinet, and imposition of Governor’s rule.

Incidentally, last year on January 9, the Governor's rule was imposed in Jammu and Kashmir as PDP and BJP were negotiating their “Agenda for Alliance” to run the coalition government for “good governance” and “development” for about two months.

But in the last 10 months, since March 2014, fissures in the coalition government surfaced in such a fashion that could no longer be ignored.

Now with Sayeed’s passing away, Kashmir is literally back to political uncertainty that prevailed in the region in January last year when the Sayeed led PDP weighed various options to decide which political party would be its “right partner” to run a coalition government for next six years.

On Saturday evening, Jammu and Kashmir’s Governor NN Vohra imposed Governor’s rule in the state after receiving concurrence from the President of India, Pranab Mukherjee.

The Raj Bhavan spokesperson also issued a statement to this effect.

“Considering the likelihood of some more time being taken before government can be formed, with the approval of the President of India, Governor’s Rule has been imposed in the State with effect from 8th January, 2016, under Section 92(1) of the Constitution of Jammu and Kashmir,” it said.

After Governor’s rule, the prevailing political uncertainty perhaps also presents yet another opportunity for the regional PDP to revisit its “marriage of inconvenience” with the ideologically divergent BJP.

In an interview the senior PDP leader and Member Parliament Muzaffar Hussain Beg described himself as “internal critic” of the party and said that some ministers in the PDP-BJP government were “arrogant” and had “no respect for voters”.

“This arrogant behaviour has to change if we want to better our party’s image,” Beg said.

Beg’s remarks come at a time when perceptions about “internal rift” in the party are getting strengthened further.

However, sources in the PDP insist that “there is no rethinking” on the future of the previous alliance. Their insistence on going ahead with the previous arrangement does very little to stop the speculations though.

Will Mehbooba Mufti go ahead with her party’s previous partnership with the BJP or consider other options to forge an alliance, with Congress perhaps?

Such a remote possibility will have multiple undertones, though.

One, the earlier decision taken by Mufti Mohammad Sayeed to stitch up a coalition with the BJP will come under the scanner. And two, it would imply that Mehbooba Mufti has gone against the decision made by her late father whom she loved and considered as a “friend” and “mentor”.

It is indeed a double-edged sword for the grieving Mehbooba Mufti.

Waheed Ur Rehman Parra, youth president PDP and former political analyst in chief minister’s secretariat, dismisses all speculations in this regard.

Parra said that his party will most definitely go ahead with the previous arrangement to follow Mufti Sayeed’s “footsteps” and “vision”.

“See, Mufti Sahab was not a politician only. Mufti Sahab represents an ideology. We will go ahead with the first conscious decision that he had made by forging partnership with the BJP,” the PDP leader told TheCitizen.

After the ‘Chaharum’ (the ritualistic mourning period of four days) of her father which culminated on January 10, Mehbooba Mufti was expected to take oath as Jammu and Kashmir’s first woman chief minister and join hands with the BJP within a week or so.

But Mehbooba Mufti is still not in the “right frame of mind” to take oath as CM. She broke down at her father’s grave in Bijbehara and later shed more tears in the condolence meeting at Gupkar in Srinagar.

Her reluctance to hold the CM’s post at this moment has made things more complex than before.

There are also people who say they are not just sure whether “she actually wants to take the responsibility”.

“Only a mighty influence like Mufti Sahab could have prevailed upon her and convinced her to become the chief minister. I am not just sure whether she is ready to take the responsibility,” said an insider.

If Mehbooba okays the coalition with the BJP, it would mean that PDP under her leadership will make a second “conscious decision” to partner BJP in less than a year’s time.

Pertinent to recall that Mehbooba had during the previous election campaign vociferously said that “the people of Kashmir would never side with a divisive force like BJP”.

“You have to come out in large numbers to vote and send out a strong message to BJP that the people of Kashmir are not a ‘saleable commodity’,” she had said. A video of her statement is available on the Youtube as well.

Many political pundits in Kashmir are saying that a week is a long time in politics, especially in a state like Jammu and Kashmir.

Interestingly, Congress party is making “calculated” moves to reach out to the PDP at the hour of grief.

Not only did the senior Congress leader and former chief minister Ghulam Nabi Azad participate in Sayed’s funeral prayers on January 7 he also visited the PDP leader’s grave in Bijbehara in south Kashmir.

Though sections of the media had interpreted Azad’s gestures as holding an “olive branch” to the PDP, Azad said that there was nothing political about it.

“My visit to Bijbehara was an act of paying respect to Mufti Sahab. It is my tribute to someone I knew personally and professionally. There is nothing political about it,” he told a local daily.

Sonia Gandhi’s Srinagar visit is being seen as a politically significant.

Meanwhile, after Mehbooba broke down at her father’s grave the former chief minister Omar Abdullah tweeted: “Anyone who tells me the visuals of Mehbooba at her father's grave today were of a woman calculating political chess moves is delusional.”

As the government formation is delayed further the guesswork in Kashmir continues unabated.