ITANAGAR: The road ends abruptly at the bank of the Dehing River. We stand on the concrete approach that usually accompanies a bridge. But the bridge was never built. Instead, we struggle to get our motorbike into a small wooden rowing boat. The river is swollen with the monsoon rains and the pained expressions of the boatmen tells us that even they are scared. The trip across is nerve-racking, only last week, a boat carrying five students capsized. Though they survived, it’s a poignant reminder of the dangers of river-crossings like this.

But for the people of the Dehing Valley it’s a quotidian danger. The only way to school, to work or to market is across one of the many rivers that dissect this massive valley.

In the last fortnight, perpetual rains have caused major flooding. Many have been displaced as they watched their lands and homes get swept away. Floods like this occur with a circadian regularity here.

Sunil, my friend and guide points across the river. It’s about a mile to the other side. “All that used to be land. Now it is riverbed. There is nothing but rock there now.”

In the small village of Shantipur alone, 425 acres of land have been lost to the river. Just up the bank, the village of Dumpani has also been effected. I visited a school which houses 350 flood victims.

“We were displaced by floods a few months ago and have been here for six months now. We have been given no support by the government. We have lost everything,” explained one victim. 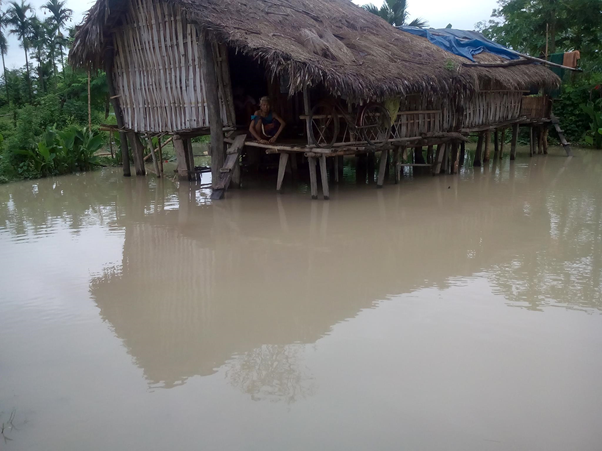 The reason for this lack of support is the same reason the bridge was never built. They are quiet reminders that vulnerability is a political phenomenon, a result of marginalisation and discrimination.

The Chakma people of Arunachal Pradesh have long struggled for acceptance and recognition as citizens of India. As stateless people they have long occupied an uncertain position, unrepresented, unheard and unsupported.

But most importantly, the Chakma are misunderstood. For decades they have been vilified by the political machinery and portrayed as ‘backward criminals’. Parties gain votes by scapegoating the Chakmas as a threat to the development and culture of the state. To this day, the Chakmas continue to receive almost no government support and the state government actively blocks their right to citizenship.

The Chakmas came to Arunachal Pradesh as refugees in 1964. They fled East Pakistan, now Bangladesh, after their lands were flooded by a large dam. The government of India settled them in the Dehing Valley, then a large jungle tract. Three generations on and they remain in a precarious position, having been citizens of a country that no longer exists.

In October 2015 the Supreme Court called on the government to confer citizenship without delay. This move has long been opposed by the state government, who have largely stalled in implementing the judgement.

The Chakmas are yet another victim of partition. In 1947 the Chakma Raja raised the Indian flag, believing that as a Buddhist majority region, their lands would become part of neighbouring India.

“In the last 200 years our people have been technically ‘non-Indian’ for a total of 17,” explained Bimal Chakma. “Our grandparents were Indian. My parents were born in India, I was born in India, my children were born here. We are Indian. Yet we are branded as Bangladeshis, as foreigners. That is an anachronism. We long for the day when we will be accepted for who we are, as Indian citizens.”

“Until then, we continue to live in deprivation” said Sunil. “We cannot get government jobs, passports, we cannot vote. It is dreadful. I feel that I have no future because I have no political rights. I cannot get a real job. Having a career is a dream that is simply out of reach for us. We live in poverty and we have no way out. We are deprived of opportunity.”

“I used to work as a teacher. I was the only teacher in the school. I had to teach over 100 children. I was paid only ?6000 per month. That is not enough to survive on. How was I supposed to teach 100 children in a one room school? It is impossible.”

All the schools in the Chakma area suffer from a chronic lack of funds. Teachers complain that the state provides almost nothing. In comparison, schools for other communities in Arunachal are better funded.

“We are being discriminated against because we have no rights” explained Bimal.

But there are encouraging signs that things are slowly improving. “During the 90’s the relationship between the Chakma community and the indigenous communities was not good” explained Supriyo Chakma, one of the community’s leaders.

“The Arunachal Students Union stirred up a lot of trouble. Houses were burnt, people were beaten up. But gradually the situation has improved. We now have a good relationship with our neighbours. We have also won our battle for citizenship rights. Things are on the up.”

“Our community now needs to focus on building bridges,” said Jyoti Chakma. “If we are to be accepted we need to prove to the other tribes that we are not the primitive criminals that politicians like to brand us as. We need to show that we want the same things and that we want to work for the development of the state.”

“The state government will continue to oppose our citizenship until this negative discourse about us is challenged and deconstructed. People are gradually seeing that we are committed to harmony and development. People are starting to see through the lies. When the truth is known, then will we be accepted for who we are, as Arunachalis and as Indians.”

[Some names have been changed the ensure anonymity. Photos by Meredydd Rix and Sunil Kanti Chakma]