NEW DELHI: Kashmir has erupted in protests, with almost every district reporting large rallies, candlelight processions, protest marches cutting across sectarian lines. Women, and the very young have also joined in although strangely enough as the protests become more widespread, the violence is going down.

There have been intermittent clashes between protesters and the forces deployed in strength by the state, but as Kashmiris themselves point out, given the thousands on the roads now, the protests have become largely peaceful. At the time of writing 1000s have gathered at the district headquarters at Shopian, shouting anti-India and pro-freedom slogans even as protests continue in other parts of Kashmir on a daily basis.

The government has become virtually helpless, with a few attempts by Chief Minister Mehbooba Mufti to interact with the locals being rejected. In several districts reports suggest that the police have not moved out of the police stations, leaving the crowds to continue with the protests that have engulfed all parts of Kashmir. Schools remain closed, and so do the shops with the young protestors going around their localities urging people to buy the essential commodities during fixed hours, after which they are requesting the business community to keep the shutters down. 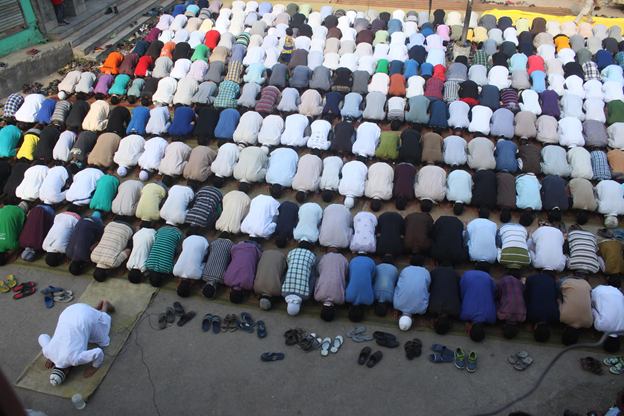 There is not a part of Kashmir Valley where protests are not taking place. The young have also held Bike and Cycle rallies in Kulgam where hundreds of vehicles took part despite the curfew. The youth ensured that the route chalked out for this did not have any government installations on the way. Interestingly, although a couple of masked militants and according to intelligence ‘sources’ the local Let commander as well, have been seen in some of the demonstrations, the protests now are led by the local youth in the districts, with the seniors now making a serious effort to control the violence.

Hurriyat leaders Mirwaiz Umar Farooq, Syed Ali Shah Geelani and Yasin Malik have been making efforts to ensure that while the protests continue, these are peaceful. They have urged the young to paint graffiti on the walls, and to keep a check on tempers. In the process, a slow leadership is emerging in at least crowd management with seniors charged with ensuring a certain discipline in the protests. As a senior academic who marched with others in Srinagar recently said, “they were not allowing any pro-Pakistan slogans, and cajoled the boys to ignore the forces and keep the procession peaceful.” As a result more and more seniors and women are joining the protests across Kashmir, with the youth leading and the others advising caution and peace.

In South Kashmir that had turned violent following Hizbul Mujahideen commander Burhan Wani’s death in an encounter, peace is fast returning with very few incidents of violence. The forces, however, continue to fire above the waist although locals report a change in the demeanour of the state police that is now trying visibly to avoid confronting the marching protesters. 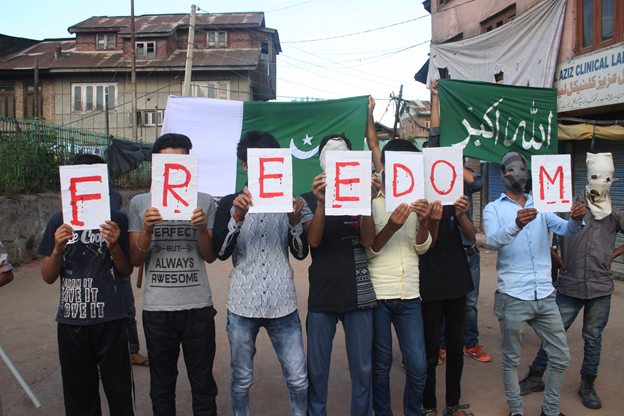 The Hurriyat, judging from the reports is trying to regain lost influence by joining actively in the protests. Making an effort to ensure peace, the separatist leaders are reaching out to all the different sectarian sects. For instance, in the Dupathyar area of Bijbehara in Anantnag district, Hurriyat (G) General Secretary, Ghulam Nabi Sumji organised a rally attended by leaders from the normally rival groups of the Jamaat-e-Islami, Jamiat-e-Ahlehadees, the Barelvis and others. As the local newspapers reported, in the four districts of South Kashmir alone massive peaceful rallies were held highlighting sectarian unity with a resolve to “fight it out till the end”.

The protests are not without casualties with the death of 17 year old Ishfaq Dar being met with protests across. According to his family, Ishfaq was beaten badly by the police on July 23, and died in hospital now. The doctors have been quoted as saying that he had sustained serious injuries to his head, after being beaten by the police and the CrPF. The police, of course, claimed that he had fallen from a tree.

Significantly violence is being reported from areas where the paramilitary tries to stop the protesters. Kashmiris make it clear they are in no mood to listen, and even as the elders stand by the youth fight pitched battles with the forces. The protesters are not targeting government installations, and remain largely peaceful where the police has not tried to restrain the demonstrations. Intense clashes are reported where there is a confrontation for instance Shopian where several sustained serious pellet injuries. 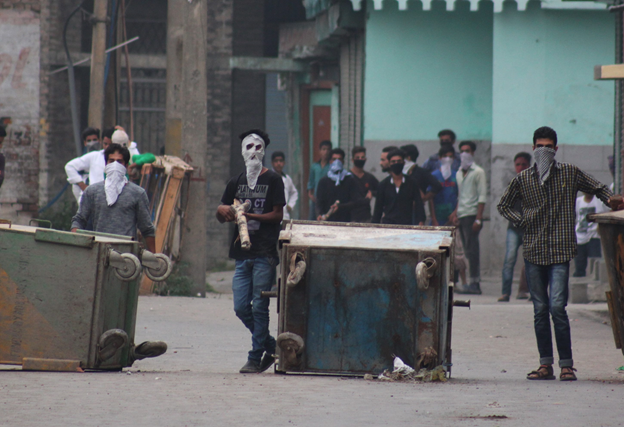 In yet another development a crowd of thousands reportedly visited the Martyrs Graveyard in Kareemabad village in Pulwama district to pray for the slain militants. The graves were adorned with garlands, flowers and photographs. According to local reports over 50000 Kashmiris had gathered in the village for the special prayers with the locals providing food and water for the protesters. Efforts by the forces to block the roads did not succeed, with the local newspapers maintaining that the crowds used link roads and shortcuts to reach the graveyard. It was here that the Kashmir chief of Lashkar e Tayaba Abu Dujana was reportedly seen as several of those buried in the graveyard were commanders of the Hizbul Mujahideen as well. The police continued to claim officially that no such gathering had taken place in Kareemabad. 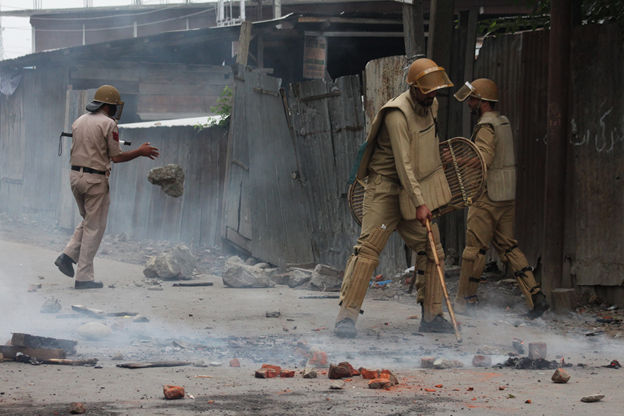 Curfew remained in force across the Valley.

(All Photographs by Basit Zargar)