ITANAGAR: It’s 4.30 PM. The sun is still lingering over the horizon. It’s not quite warm and the sky is overcast causing a certain moistness in the air. At the gates of the Hanuman temple at Ganga Market in Arunachal Pradesh’s capital are scattered shoes, sandals and slippers as devotees and the not-so-devoted make their way inside to get a glimpse of the statues of Durga killing Mahishasura and other deities aside from paying obeisance.

Popular discourse on Durga Puja and its associated celebrations are usually centred around Kolkata and Bengali-populated areas such as Delhi’s CR Park. However, unbeknownst to many people in the rest of the country, Durga Puja celebrations are quite the thing in much of Arunachal Pradesh, especially in the state capital which is home to a large Bengali population. Little wonder then that bright-lit pandals are ubiquitous here.

Inside the Hanuman temple, built in 2001, a temporary altar houses the statue of Durga killing Mahishasura.

Three men in white dhotis and vests begin to play a familiar tune on their heavy drums while a fourth man keeps the beat with a handheld percussion instrument. The hall almost vibrates with the collective sounds of the instruments and the occasional ting of the bell.

In one corner, Nirmala Roy from Cooch Behar, West Bengal uses her fingers to pour ghee into diyas to be lit and placed in and around the temple. She says that the temple requires 108 of them.

Most devotees come and go, offering nominal sums of money as donations while many others offer their prayers from a distance. Looking around the temple (and outside it), it becomes evident that Durga Puja is not just a festival for people of a certain ethnicity or religion as the number of indigenous tribal families appear to number equally to that of the Hindu Bengalis. And regardless of their faith, no one forgets to grab a bowl of the free khichdi on their way out.

Outside the temple, there appears to be another festival in play. Or rather a mela of sorts.

Stalls selling sweets and snacks ranging from laddoos and pakoras to heartier dishes like chicken rolls and chicken biryani, everything is fair game. There is even a stall by a popular pizza chain!

“Aayiye, aayiye (come, come),” shout men and women manning the many stalls encouraging people to try their wares. In one of the stalls in the corner, Dilip Kumar twirls jalebis into a wok full of hot oil for sale.

He is originally from Muzaffarpur, Bihar and sells chana on most other days.

At the end of the row is a stall selling toys, manned by a few children. Overseeing the whole affair is Hakim Choudhury.

Sporting a silvery beard and wearing an Islamic skull cap, Choudhury tells me that business wasn’t great the previous night since it had rained. I learn that he’s from Karimganj, Assam and came to Itanagar 35 years back.

“There were only seven shops here at that time,” he says, contrasting the present scenario.

Choudhury says he hasn’t had time to go to the temple yet but will go once the crowd subsides since he has to attend to customers.

“Does your faith allow you to enter the pandal,” I ask.

“Why not? What’s the difference between Bhagwan and Allah after all,” he asks rhetorically.

“We just call him by different names.” 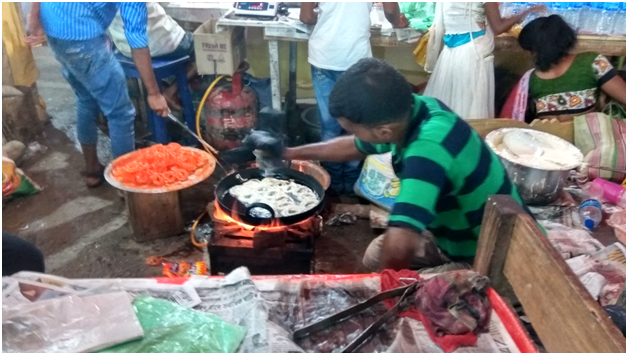 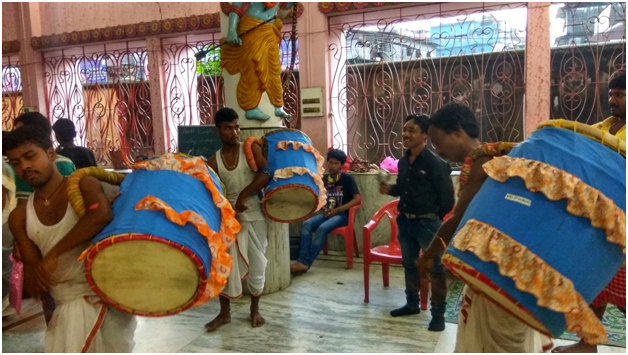 Three men and their drums 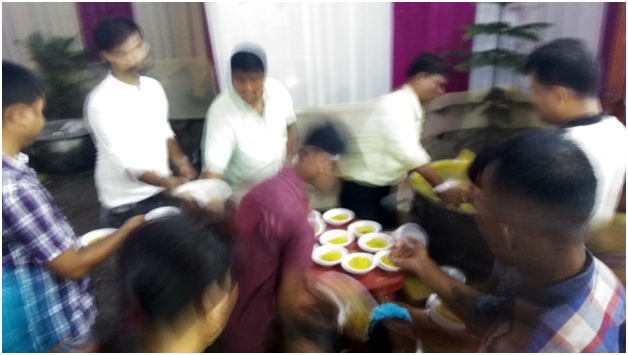 The rush for the famous khichdi 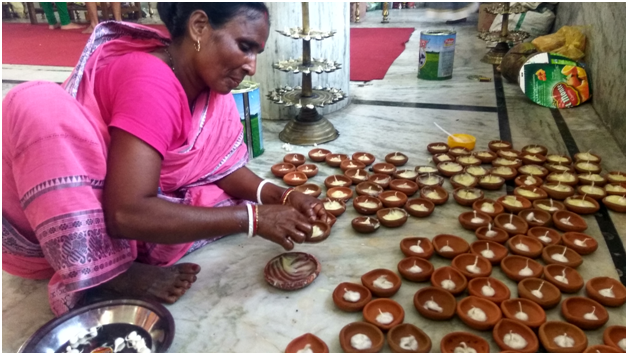 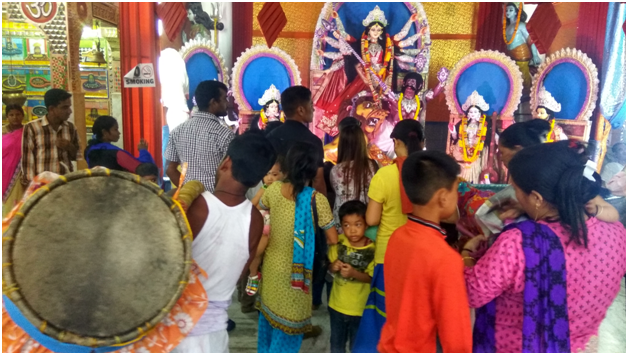 Devotees praying to the goddess 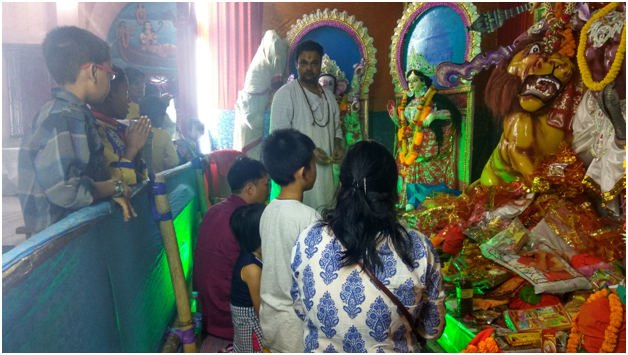 The pandit conducting the puja