NEW DELHI: Before any religion enters a stateless society it often encounters some form of belief system that is colloquial, unregulated and animistic in nature. These religions are easily tagged ‘Shamanic’ owing to the prominence of the medicine man and his dependence on nature for curing human problems, emotional or physical. In the case of Buddhism, the religion emerged in India to later migrate rapidly out of the country, then re-entered the country through its eastern gates, but in a new avatar.

Much of Buddhism that is practiced in India now is a Tibetan version following esoteric rituals- Vajrayana Buddhism. Upon entering India via the north and north eastern states, one state in particular played an important role in subsequently developing into a major pilgrimage site. This happened because of the words of a Bodhisattva (a buddha who decides to remain in the world for the benefit of all sentient beings) known as Guru Padmasambhava, or more famously, as Guru Rinpoche, who is one of the most influential masters in the spread of Buddhism in Tibet. Guru Rinpoche declared Sikkim as the hidden land and the valley of fruits, thereby sealing the fate of the hill state. There are many sacred places associated with Guru Rinpoche in Sikkim and many pilgrims from all over the world come to visit them. 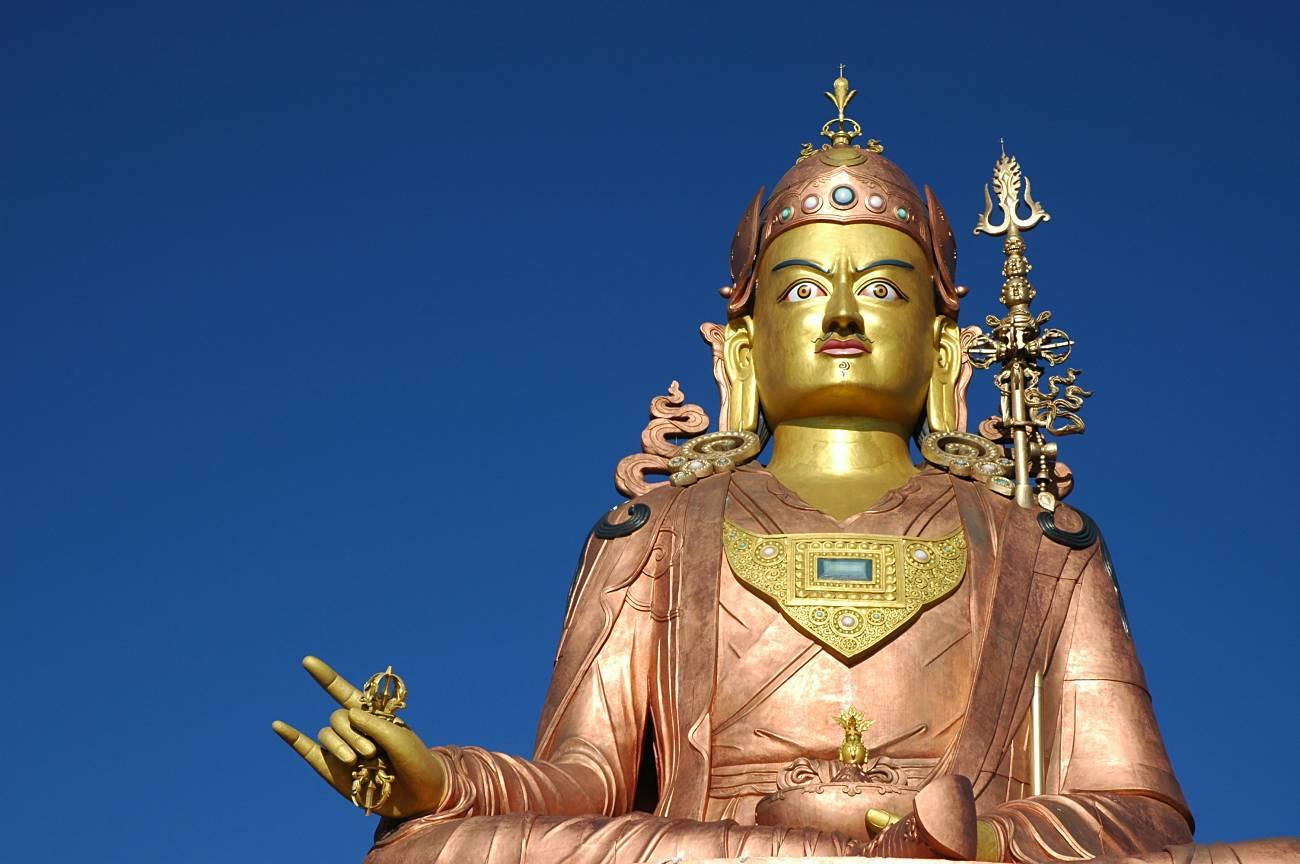 (Guru Rinpoche Namchi. Guru Rinpoche declared Sikkim as the hidden land and the valley of fruits, thereby sealing the fate of the hill state)

Buddhism, which firmly established itself in Sikkim in the seventeenth century, initially absorbed the cult of ancestral gods and local deities which eventually became central to the performance of rituals that are currently held by both village lamas and shamans. There are six premier monasteries in Sikkim, namely Pemayangtse, Tashiding and Phensang for the Nyingmapa, and Rumtek (not to be confused with the Karmapa’s Dharma Chakra Centre also located at Rumtek), Ralang and Phodong for the Kagyupa. The premier monastery is Pemayangtse as it was responsible for the performance of the Chogyals’ coronations and other royal rituals such as the annual monastic dances performed at the Palace chapel in Gangtok. The stone throne on which Phuntsog Namgyal was anointed Chogyal is still extant in Sikkim, as is the gigantic tree that is said to have survived from that time. 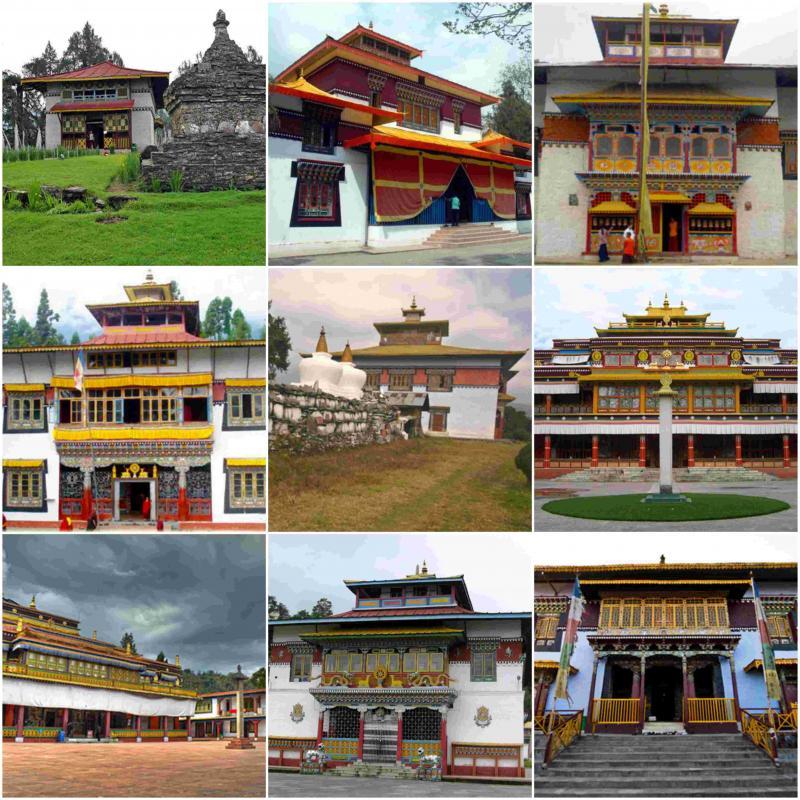 (Monasteries of Sikkim, with Tibetan architecture. There are six premier monasteries in Sikkim, namely Pemayangtse, Tashiding and Phensang for the Nyingmapa, and Rumtek, Ralang and Phodong for the Kagyupa)

The most prevalent school in Sikkim is that of Nyingma School as the three founder Lamas from Tibet belonged to this school. There are also a few monasteries belonging to the Kagyu School. Besides these two there are only a couple of monasteries belonging to Sakya and Gelug Schools. Sikkim’s people revere all schools and many gurus of all the four Schools of Buddhism frequently visit Sikkim on pilgrimage.

When Buddhism was being firmly established in Sikkim, an alternate form of religion already existed in the region. It was Shamanistic in nature and is the traditional polytheistic, animist, and syncretic religion of the Lepcha people. It predates the seventh century. Because of it animistic nature, the natural environment provides the basis upon which is it is practiced. In Sikkim today, there are several kinds of ritual practitioners: (1) the non-celibate village lamas, both Kagyud and Nyingma; (2) the pawo and the nejum, the male and female shamans of the Lhopos; and (3) the bongthing, a specialist who performs the offering rituals for the supernatural beings of the locality. The pawo and the nejum specialize in maintaining good relations with the pho lha mo lha (father god, mother god), the Lhopos’ ancestors and lineage protectors through possession and offering rituals while the bongthing, who never gets possessed, maintainsgood relations with the ambiguous supernatural beings who inhabit the local territory. On very rare occasions, he may still do so through the offering of an animal sacrifice.

Some of these practitioners are mediums to the spirits, thus can be broadly called Shamans, and their religion shamanistic in nature. An example of these shamans can be seen most recently in Malag Ajo Pawo, the father of Pawo Nadu, in the present Tieng Chim village, who was famous for this ability and could bring back descriptions of the deities’ palaces. He would start every séance with the chanting of a bon oral text, The Bon (story) of the Deer with the Eight-Branched Antlers (Bon shwa ba’i rwa brgyad) 18 and ‘wind’ would then take him to the abode of the supernatural beings and the sacred locations of Sikkim, such as Tashiding, Pemayangtse and Rabdentse, where the deities are said to reside. However, he was the last of them in his village and probably in Sikkim. 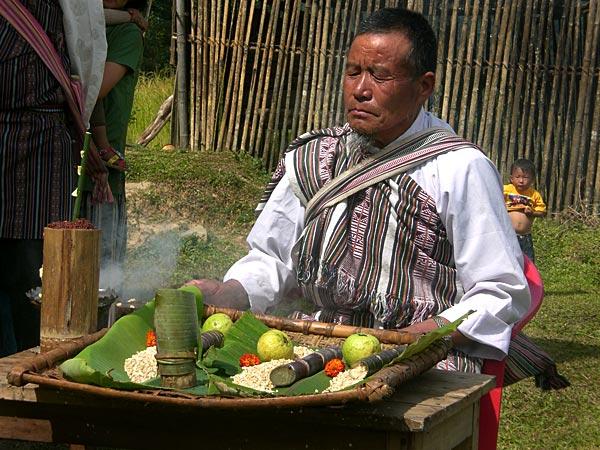 (Village Shaman: Some of these practitioners are mediums to the spirits, thus can be broadly called Shamans, and their religion shamanistic in nature)

Shamanic belief is slowly becoming extinct because of two reasons: firstly the dominance and the syncretic nature of Buddhism which upon arrival has subsumed the local religions of Sikkim’s people. An example can be seen in the a Thangka housed in the Namgyal Tibetology museum in Gangtok where Lord Kangchendzönga is added into the local pantheon of Buddhist deities. The second reason is the expensive ritual proceedings of the shamanic rituals which prompted people to switch their affiliations to Buddhism which has the same problem solving, illness curing rituals at a far more economical price.

Sikkim was indeed such a kingdom where Buddhism became shamanic and shamanism became Buddhist, created in 1642 by three visionary Nyingma lamas who established both a new political structure, and, to some extent, a new religious order. Together, the three lamas founded the kingdom at Yuksom in West Sikkim and enthroned Phuntsog Namgyal of Gangtok as Chogyal or king who rules per the Dharma, thus entrusting him with both temporal and spiritual powers. When the lamas proceeded to convert the indigenous Lepchas to Buddhism, they did so by converting their sacred landscape and including its already sacred features within his Buddhist rendition of Sikkim’s sacred geography. He composed the Nesol (gNas gsol—‘offering to powerful sacred places’) ritual text, which is a celebration of Sikkim as a beyul (sbas yul—‘sacred hidden land’) and an offering ritual to Kangchendzönga (gangs snow, chen great, mdzod treasure, lnga five), Sikkim’s mountain god, and to all the deities of the land. The Nesol is still one of the most important and most often performed rituals in Sikkim, as much in the monasteries as in the villagers’ private houses.

From its inception, Sikkim remained a Buddhist kingdom where the people’s shamanic worldview remained unchallenged by the missionary lamas, where the land was sacred, where ancestral gods and the country’s protectors resided in its mountain peaks, and where the cause of illness and misfortune was to be found within some imbalances of this relational whole. The Tibetan immigrants, ancestors of the Sikkim’s Lhopos who came to Sikkim from the thirteenth century onwards, lived side by side and even intermarried with the Lepchas who, despite their conversion, never abandoned their shamanic practices. Sikkim indeed seemed to be a good choice for studying the persistence of the shamanic worldview among a Tibetan Buddhist community rather than the process of its demise. The persistence of the shamanic worldview in Sikkim is not only due to the inherent shamanic nature of Nyingma and Kagyur Buddhism as defined by Geoffrey Samuel or the Tibetan immigrants’ close association with the Lepchas.

And until the end of the monarchy in 1975, the most important state ritual was Pang Lhabsol (dPang lha gsol—‘offering to the witness god’), the national celebration of Kangchendzönga, which was not only attended by lamas but, although discreetly, by Lepcha shamans. Pang Lhabsol was, to some extent, a national shamanic ritual in the sense that it celebrated people’s relations with the sacred land and its deities. For Sikkimese villagers, the idea of relationalism is much more pervasive. For example, their body and patrilineage are related to the landscape through their pho lha mo lha who reside in the high mountains and, in some cases, simultaneously in specific locations of their own bodies. One of the most important of these lineage protectors, the mountain god Kangchendzönga, was also worshipped during the ‘old days’ as protector of the kingdom by everyone who considered himself first and foremost as Sikkim’s people, thus linking and uniting the person, the lineage, the village and the state together under the Chogyal. A person is defined by these relations to land, lineage and ancestors, which in turn bind villagers together. Illness is often but not exclusively thought to be caused by either disregarding these relations, for example by omitting to perform a prescribed ritual for the pho lha mo lha, or by violating them, for example by quarrelling among relatives or damaging a supernatural being’s territorial abode. Village lamas and shamans share and work together within this worldview, which is best illustrated through the ritual curing of illness and the notion of drib (sgrib—pollution, defilement). Any action that is thought of as wrong becomes a source of drib. In turn, the presence of drib offends neighboring supernatural beings who then express their displeasure by inflicting suffering on human beings. Ideally, a ritual cure demands that this original wrongdoing be uncovered and the offended supernatural being’s identity be precisely established either through the shaman’s possession rituals or the bongthing’s or the lama’s divinations. The popularity of the shamans and the bongthing is of course due to the fact that they are far better equipped than the lamas to operate within this local shamanic world where the social and physical environments and the supernatural are thought to be so intimately linked. 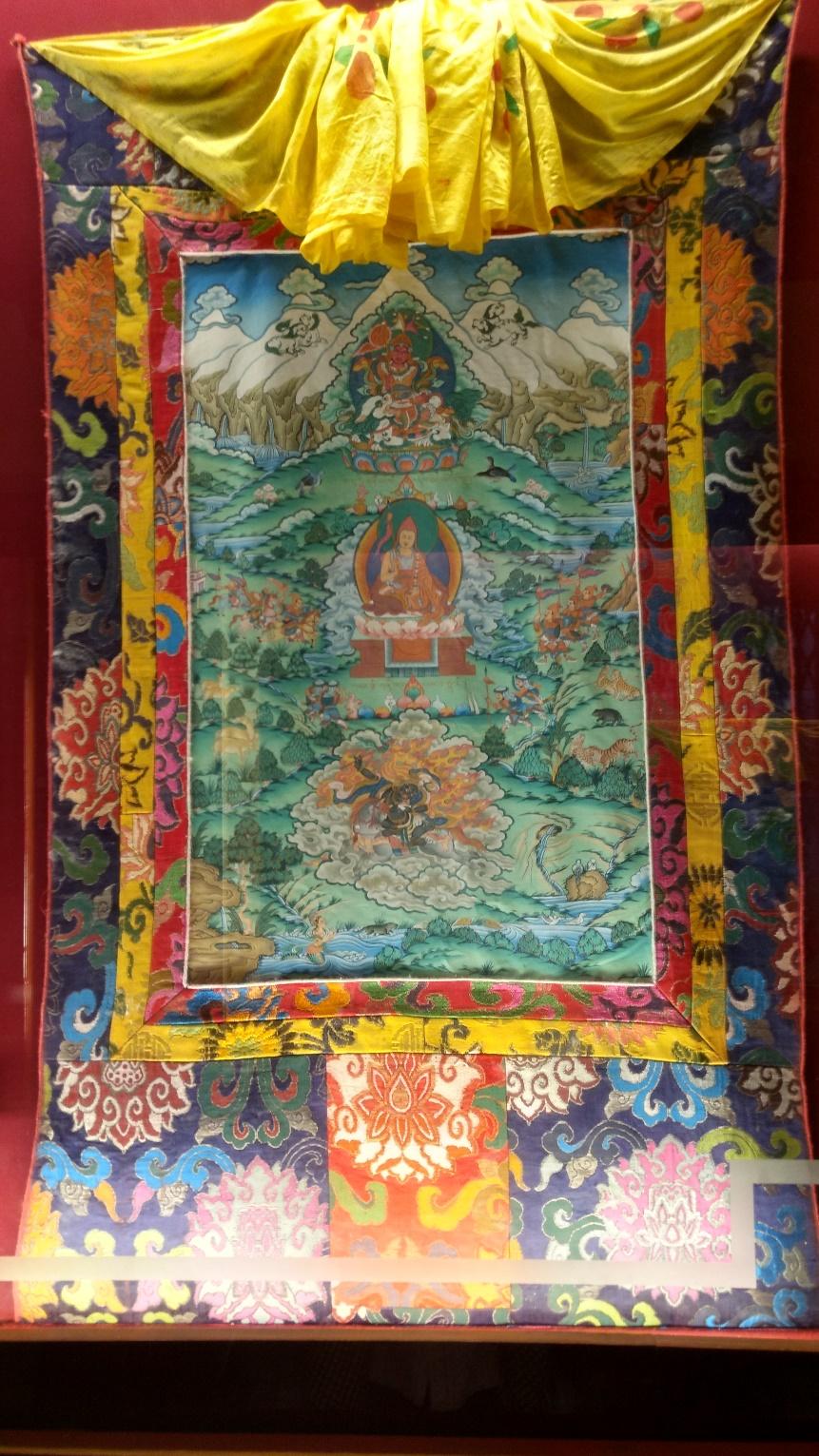 (Three protective deities of the Upper Middle and lower regions of Sikkim: Gangchendzonga; Pawo Hunri and Yapdu (from to bottom))

This unique relationship is now being subsumed by popular religious beliefs that overtake the youth, because of convenience of ritual. Sikkim -- an important pilgrimage site -- is now losing out on material culture as monasteries that house the histories of the people are crumbling over time. Pemayangtse monastery, which is the most important religious institution in Sikkim, lies in bad condition, where the rich murals of the main prayer halls are flaking, the colours fading and the artifacts accumulating dust and mold. This monastery was once the place where royalty was instituted, and now it lies in shambles, forgotten, and thus ignored.