Theatre Under the Sal Tree: A Dream Come True

GOALPARA (Assam): Welcome to Assam’s sleepy Rampur village in Goalpara district. Here the villagers have conducted a unique theatre festival. A festival that is held in the midst of the jungles, in the lap of nature carrying a powerful message of sustainability and cleanliness.

Badungduppa Kalakendra, a theatre group led by Sukracharya Rabha, has been organizing the ‘Theatre Festival under the Sal tree’ since 2008.

There is neither a stage nor any electronic gadget or microphone. The artistes perform without unnatural props. 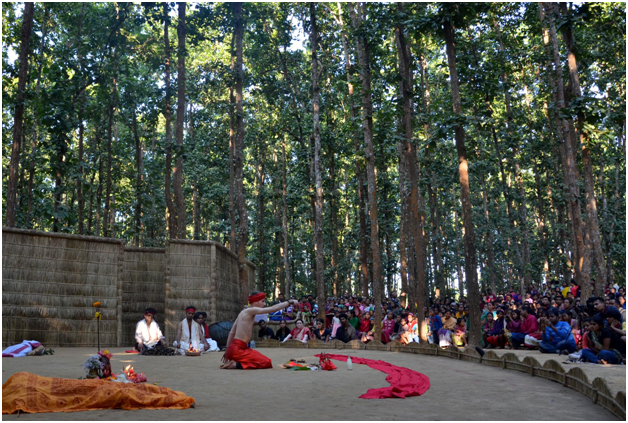 “First of all it’s about nature and our relationship with the nature. I always wanted to make it different from others. See, if someone is travelling from a faraway to experience my theatre and if he or she cannot find anything appealing and different it is of no use. I could have easily made it using artificial equipments but if I do so, there is no point why should I organize it in the midst of the jungle and under the Sal tree,” Sukracharya Rabha, a Bismillah Khan Yuva Puraskar awardee, told The Citizen.

This year’s edition came to an end on December 18. Altogether eight groups participated in the festival and out of these four were from Brazil, Poland, South Korea and Sri Lanka.

“It’s uniqueness is that we do it completely under the natural setting. Our focus is on the plays and with environmental concern. We, the Badungduppa Kalakendra, have made sure that there is no food of any kind in plastic, and we remain along with the audience as close to nature as is possible,” Rabha added. 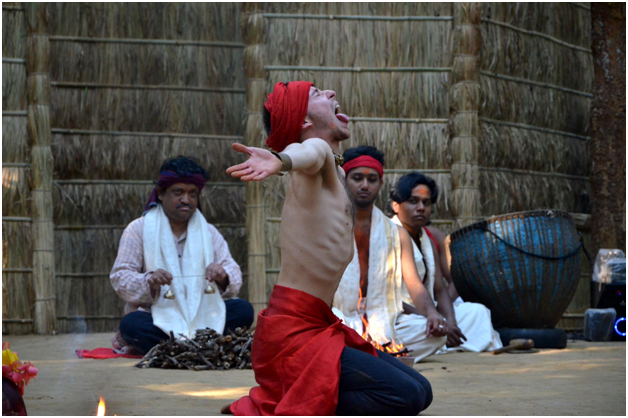 Bamboo and straw is used for the ‘stage’ and for the sitting arrangements for about 1700 persons.

The artistes from different parts of the globe who have participated in the theatre fest are elated to be a part of this.

“Initially we were a bit worried about the sound. But we were surprised to experience that even low decibles were audible in this setting. It’s a great atmosphere,” Kim Daesan, an actor from South Korea told The Citizen.

Inhyun Song, director of a play ‘Black Hen’ who has also been involved in a similar kind of theatre movement back in Seoul, appreciated the efforts of Sukracharya Rabha. Song believed that such a movement can effect a major change. 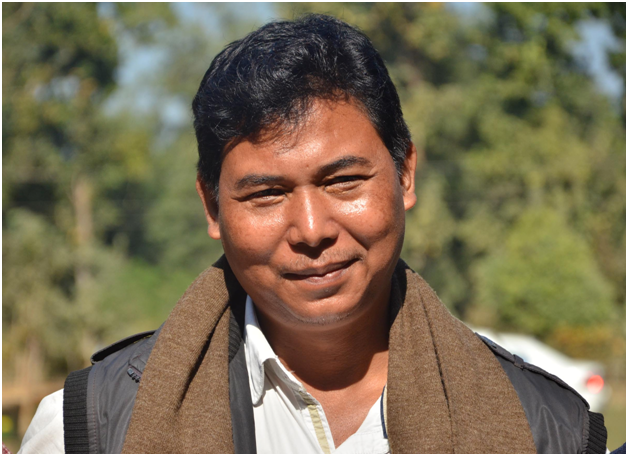 But the initial days were tough for Rabha, to organise the festival that took a lot of doing but also to convince the people that this would succeed.

“Here in this locality, there is no auditorium. Except street plays with a certain message to influence people, there is no tradition for serious plays during the day time in the sunlight. It was tough initially but I did not budge from my goal, finally it helped,” said Rabha.

Initially, he would stage plays at around 2.30pm and found there was hardly any response from the people with just 10 to 15 turning up. This increased very gradually, but now the festival is attracting more and more people. “We don’t even publicise much like putting on advertisements on papers. What we do is just make an announcement in the evening market,” he added.

Rabha is also grateful to the local people who have been extremely helpful in making his dream to come true.