"I'm Not Proud Of What I Am Doing": Have Fundamentalists Caged Dangal Girl Zaira Wasim?

NEW DELHI: “I feel very loved, its not about fame, its about love.” These were the happy words from a young pretty Kashmiri girl, Zaira Wasim, flushed with the success of her maiden movie Dangal. These words were followed just a few days later with, “Forgive me, I am just sixteen… I want to apologize to all those people who I have unintentionally hurt. People have been hurt by who I meet.”

Zaira whose twitter page indicates the excitement that followed her success now carries a long apology to those who have clearly protested about her meeting with Jammu and Kashmir Chief Minister Mehbooba Mufti. Waseem, and her parents who live in Kashmir, met Mufti who embraced the young girls success as indeed a CM should.

Clearly this meeting was followed by a volume of protest, sufficient to scare the parents and the young actor, into issuing an “apology” and a promise not to meet politicians. Zaira also made it clear that while she was being projected as a role model for Kashmiris she “want to make it very clear that I do not want anyone to follow in my footsteps or even consider me as a role model. I’m not proud of what I am doing and I want everyone, expecially the youth to know that there are real role models out there whether they be in this time or our history.”

“To even consider me as a role model would be disgracing them, and their disgrace would be Our Disgrace” said the long tweet that has had responses, also from Kashmiris asking if she had been threatened by anyone. Zaira Wasim removed the tweet shortly after. 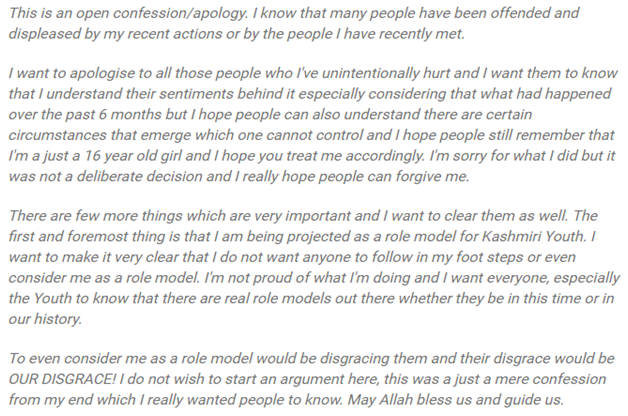 This reflects the tragedy that is Kashmir today. Where in the absence of dialogue, young people with their own aspirations are being caught by an uncompromising state on the one side and fundamentalism on the other. Both the state and the fundamentalists, for instance, have ensured that there is not a single functioning movie hall in Srinagar; the first citing security reasons, and the second evoking their version of Islam.

Zaira for whom Dangal was a dreamt of opportunity responded to the adulation initially with a big smile, and Yayy thank you’s on the social media. A 16 year old she kept her head on her shoulders when asked in an interview whether she was a role model, by saying at that time, that she was sure that the young people who regarded her as such had their own potential and would do even better than her. She has had to change this, under pressure, to maintaining in this social media apology that her achievement is a ‘disgrace.’

This smacks of the fundamentalism that is using the anger and protests in Kashmir against violations of rights and justice, to grow. Hardliners are flexing their muscles, and bringing pressure on not just the young people but their more vulnerable parents and families to conform to what is now being spread at different levels as Islam. Young artists, musicians, even journalists with independent views are feeling the pressure and several confided that the environment by the political impasse is being exploited by fundamentalist hardliners.

Unfortunately the environment is such today---as many have been writing and warning of to a deaf New Delhi---that young girls like Zaira, or like an all womans band earlier are brought under tremendous pressure laced with open threats. The public apology has in fact ensured that the 16 year old goes under cover, and is not able to follow her talent under pressure from those who insist that the creative arts constitute a ‘disgrace’. Unfortunately so vitiated is the environment that while many agreed with this writer, no one was willing to speak on the record. Not even the editor of a state newspaper who was amongst the first to report the news, insisting that he had no idea as he was in Jammu.

A careful persual of her tweets do not reveal overt threats, but there is a tweet from Zaira Wasim on January 10 maintaining that both her Facebook and Twitter accounts had been hacked. There is some commiseration in the responses. Clearly the pressure has been felt off the social media, with women in Kashmir facing considerable oppression in an increasingly oppressed system. Unfortunately, despite reports of women suffering from increased domestic violence, and severe depression CM Mufti has not even bothered to deal with even these basic issues by meeting the shortfall of doctors and medicines. Suicidal tendencies in women have been recorded by the few groups that do work in the Valley with women, but the government response remains that of indifference.,

Zaira Wasim, too young to know how to cope with this pressure from a Valley where the fundamentalists are clearly gaining control, has issued this public apology that is heart rending. In the past the young all girl musical group had to disband the minute it was noticed, with the young girls allowed no room to sing their hearts out.

A young rapper who tried to bring his talent into other parts of India was named in a sedition case for singing little more than “I am a rebel” in Bangalore and returned to Kashmir facing the pressure from right wing forces, just as Zaira Wasim and other young girls in Kashmir have had to give up their aspirations and their talent under pressure from local right wingers. The only difference being that both pressure groups are from two different communities working in tandem though, to ensure that the democratic space is shrunk beyond recognition in the name of ‘nationalism’ and ‘azadi’, both doused in a heavy dose of (different) religions.