ITANAGAR: By now news of Meghalaya Governor V Shanmuganathan’s resignation amidst allegations of sexual harassment and misconduct are all over the country. The latest being that he is currently holed up in Arunachal House in Chanakyapuri in New Delhi to personally resign from the post. Shanmuganathan, till Thursday night, was also the governor in-charge of Arunachal Pradesh.

The controversy first erupted on January 24 when Meghalaya-based newspaper, Highland Post, reported that Shanmuganathan had “manhandled” a female candidate who had come to the Raj Bhavan in the capital Shillong on December 8 to appear for a “personal interview” with the former governor for the post of public relations officer.

This was following the first batch of interviews that were conducted on November 7, when ten female candidates had appeared. The next day, five male candidates were also called in. By December 7 however, one female candidate had reportedly already been selected for the post and was informed about it telephonically the same day. 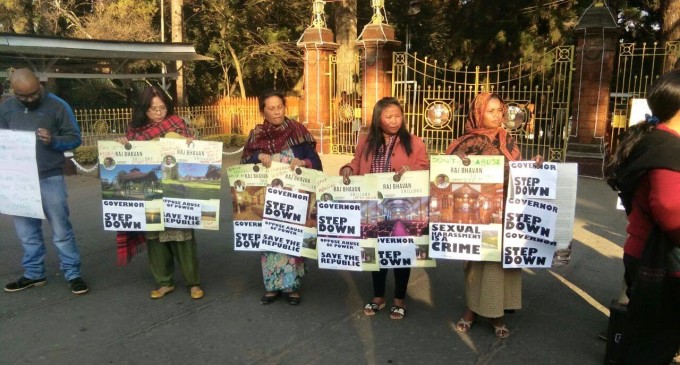 The woman whom Highland Post quoted alleged that Shanmuganathan hugged and kissed her and even offered her a “part time or full time job” inside the Raj Bhavan. She described to the paper that “it was a dirty hug” and that she “felt disgusted and violated” by his actions.

Shanmuganathan subsequently denied the allegations and said that the candidates were “like my daughters and granddaughters”. The former governor is reportedly a long-time RSS man who later joined the BJP and is a bachelor.

Following the media attention, on Republic Day when Shanmuganathan was hoisting the Indian flag at the Arunachal Pradesh capital Itanagar, 98 members of the Raj Bhavan staff in Shillong wrote to the President and Prime Minister listing his repeated deeds of misbehaviour.

From accusing him of having a “habit of telling lies” to having “insulted, humiliated and psychologically tortured officers and staffs of Raj Bhavan”, the letter made 11 accusations against him.

The 11th accusation alleged that he made three appointments to the Raj Bhavan (all females) who were provided free lodging in the Raj Bhavan. The staff claim that one of the women appointed as personal assistant was later given the post of PRO and accompanied him whenever he was on tour outside of Meghalaya, and that when he was in-charge of Manipur, she stayed in the same room with him.

Most embarrassingly, the letter accused him of "turning the Raj Bhavan into a Young Ladies Club."

Although he has resigned and is in New Delhi, refusing to speak to the media there, this is not the first time he has landed in controversy.

Shanmuganathan first became governor of Meghalaya on May 12, 2015 and was later given additional charge of Manipur on September 30,2015.

Less than a year later, he found himself in the middle of a ‘cultural controversy’ in Manipur. While inaugurating the University of Culture and Manipur State Film and Television Institute in Imphal he called upon the eminent gathering of writers and artists from the state to write the definition of culture in 100 words.

“You just write a letter to me. Just 100 words, one page. What is culture according to you? I will invite the selected people for coffee with the Governor in Raj Bhavan with a cash reward,” he had said back then. Renowned filmmaker Aribam Syam Sharma, whose film ‘The Chosen One’ was screened in the Un Certain Regard section at the 1991 Cannes Film Festival, was present at the gathering in Imphal and was not amused by Shanmuganathan’s coffee offer.

In an open letter to Shanmuganathan, Sharma said that “in the culture of those assembled on that occasion, asking such a question – fit for school children – to those who have dedicated their lifetime, who are living embodiment of culture, is considered as uncultured, in our culture”.

Just a day after he made those remarks, Shanmuganathan was relieved of his post as Manipur Governor in-charge.

Sources in the know said that the latest development may have made headlines in the past few days but activists had been gathering “evidence” of his misconduct for at least a month, including a CCTV footage of him putting his arms around a woman in the Raj Bhavan in Shillong.

“In the *video footage it isn’t clear if he is molesting her so to speak but he can be seen with his arms around her and that is not appropriate behaviour on part of any governor,” the sources claimed.

The sources also said that officials in the Centre asked Shanmuganathan to resign after they were given “evidence”. The reports in the media also triggered protests outside the gates of Raj Bhavan in Shillong on Republic Day.

Reactions from civil society bodies aside, there hadn’t been any strong vocal outrage from the Mukul Sangma-led Congress government in Meghalaya until the recent media reports although there were murmurs of Shanmuganathan’s misdeeds inside the Raj Bhavan.

Some sources say that the muffled response may have something to do with the fact that a minister in Sangma’s government is also in the midst of a controversy.

Police recently arrested independent MLA Julius Kitbok Dorphang from the neighbouring state of Assam after he was accused of raping a minor girl on December 15 last year. The incident sent shockwaves in political circles in Meghalaya especially after allegations arose that the girl was raped in a guest house owned by a relative of a powerful minister in Sangma’s government.

The latest developments have also given voice to the Congress in the region which has taken a beating of late in what has been its traditional bastion.

Before his resignation, the Congress in Meghalaya had demanded his removal for behaving in a "disgraceful" manner and turning the Raj Bhavan into “scandal bhavan”.

In Arunachal Pradesh, where the fall of the Congress hastened after former governor JP Rajkhowa (also a reported RSS sympathiser) recommended President’s Rule in the state which was imposed on Republic Day last year and lasted for about a month.

The Arunachal unit of the Congress today said that it was an “immature and inexperienced decision” of Prime Minister Narendra Modi to appoint “a person like Mr Shanmuganathan with RSS background in the highest position as the constitutional head of the state”.

It also made references to Rajkhowa’s appointment as governor and said that he “ignored the position and responsibility of a constitutional head with total violation of the privilege and provision in the Constitution of India at behest of the BJP and RSS”.

The Congress in Arunachal also called for Shanmuganathan’s “immediate arrest for seriously compromising the dignity of the gubernatorial office as well as hurting the sentiments of the people of Northeast”.

Whether calls for an arrest bear any fruit remain to be seen but since he is no longer a Governor, he is not protected against arrests by the Constitution anymore if there is enough evidence of him having committed a crime.

(*Note: The video footage in question has not been independently verified by The Citizen)