GUWAHATI: Deshi Janagosthi, one of the indigenous communities of Assam, is worried about losing its tribal status just because it follows the religion of Islam. And tends to be ignored in the process.

“We are a very old ethnic group of Assam, the recorded history of Deshi people dates back to 13th century, some quarter century prior to the arrival of Chaolung Sukaphaa, the founder of Ahom dynasty. Interestingly though majority of Deshi people are converted from Rajbongshis and we share the same dialect, traditions, food habits and social customs but there are people among us whose forefathers converted from Mech, Rabha, Bodo, Garo, Nath-Jugi and even Kalita tribes and communities. So, Deshi community itself is a mosaic of various race and ethnicity,” Ashiq Zaman, a deputy commissioner of government of India posted in Mumbai who belongs to the Deshi community told The Citizen.

As their forefathers converted from various tribal and Hindu ethnic groups, there are remnants of those cultures and belief system still among them.

“For example, we use vermilion in our wedding, we observe ‘Beshoma’ which is a harvesting festival like Bihu, and most strikingly our people observe ‘Amaati’ a custom prevalent among Rajbongshis which is related to Ambubachi mela of Kamakhya Temple. But I’m afraid whether we will be able to preserve the rich cultural heritage of our forefathers,” Zaman added. 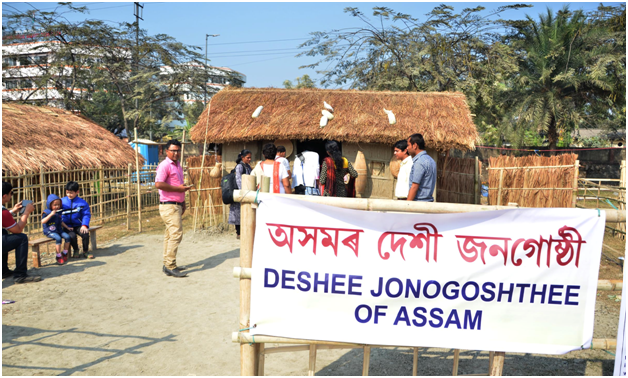 “The Assam government should do something in this regard, like in West Bengal where, the government has recognised the ‘Muslim Rajbongshis’ as OBC,” Zaman said.

There is around 25 lakh population of the community scattered around in Goalpara, Dhubri, Kokrajhar, Kamrup district besides some in eastern Assam.

“We have always been neglected for no reason over the ages. Though many people know about the community, there are still many who do not know. Just because the religion is Islam, many get confused. Many do not recognize our language and try to brand as Bengali and the people as migrants from Bangladesh. This is very unfortunate,” Imran Hussain, a prominent author of the community told The Citizen in Guwahati.

Deshis speak the Goalpariya dialect which is known for its rich folk songs popularised by legendary Pratima Barua Pandey.

They have their separate food items like any other indigenous community of the state and dress. Their wedding rituals also have unique characteristics.

Among others, there were traditional food stuff including Bohoni, Sidol, Chotkani and Nali Pata.

“In our marriage, women play a major role. When the wedding process starts between the two families it’s always women whose decision plays a vital role. It’s again when the shopping starts for the occasion, it has to be vermilion which needed to be bought first of all as a tradition. There are six stages of marriage and in every step women play a major role,” said Mujibur Rahman, a teacher at Dibrugarh Polytechnic Institute.

Now, these people don’t want to lose their identity and want to be recognized as one of the indigenous communities by the state government.

“We are so happy to be here. It was a great experience to communicate with the visitors and make them understand that we are very much part of the state. We are thankful to the organizers,” said Anisur Rahman, an advocate who belong to the community.

For the visitors also at Khanapara Veterinary playground, it was different experience. “It was a great experience to learn about the community. We were not aware of the fact. We never thought that these people are indigenous,” said Ramen Bezbaruah, a student.

The Rongali festival – from February 3 to 5 -- brought together all the different tribes and communities of the state for a rare experience for the visitors.

Organizer Shyam Kanu Mahanta said that the festival has brought the essence of Assam with a focus on tribal culture of the state. “The Deshi community people have taken part in such an event for the first time. It means a lot when we talk about greater Assam,” said Mahanta.

Second Photo: Visitors at their model house in Rongali festival in Guwahati)