Is This The Job of the Indian Army, Or Of The Inept Civil Administration?

CHANDIGARH: In his recent article titled ‘Economics of Swachh Bharat’ published in leading India dailies, the Finance Minister has drawn attention to Prime Minister Narendra Modi’s call for a Swachh Bharat with universal sanitation by 2 October 2019.

The focus of the article is on open defecation linking it with: diarrheal diseases; safety, security and dignity of women; 40% of India’s children physically-cognitively stunted due lack of sanitation as per World Bank; lack of sanitation is costing India over 6% of GDP as per World Bank, and; every family in open defecation free village saves Rs 50,000 annually by avoiding medical costs, time savings and lives saved, as per UNICEF.

The opening sentence of the article reads “As they say, no one can stop an idea whose time has come”, and later he goes on to say “Influencing a change in behavior for 60 cr people is a challenge that has probably never been undertaken by anyone in the world”.

We just have to look around to see when did this ‘idea’ come elsewhere and are we really the first to undertake the exercise to influence public behavior - never been undertaken in the world? Just look at Vietnam. At a time when Gandhi was rising early morning and covering open defecations with mud using a shovel, his contemporary Ho Chi Minh was ensuring every household in Vietnam had a toilet. So you find none of the 92.7 million Vietnamese population are resorting to open defecation.

The above is not adverse comment on Gandhi who had his own methods to show the way to the people – at least cover your defecation. But it does reflect how and when nations adopt ideas. There is nothing menial about cleaning the garbage oneself either.

In Japan, the responsibility of cleaning the portion of public road in front of the house is that of the house owner. If not done for two days, police issues warning. All Indians living in Japan adhere to this. Waste segregated as bio-degradable and non-degradable is kept outside individual houses everyday.

Having held the defence portfolio also, wonder if the Finance Minister realized that military cantonments have been models of Swachh Bharat for past 70 years of independent India. In comparison, indicators of the ground situation in balance India are:

Above are but just a few examples. Then is the recent news of the PMO / Defence Minister tasking the Army to clean tourist ‘hotspots’ in mountains / high altitude areas.

Copy of one purported army signal talks of area sanitization, removal of non biodegradable waste involving maximum civilians, officer led patrol for each location, flag off by commander / deputy commander, flag-in by RRM based on feedback, maximum media publicity both in electronic and print media, daily feedback in situation reports and what have you.

Doubts were being posted in social media whether this signal is handiwork of the ISI, but then photographs as below have started appearing: 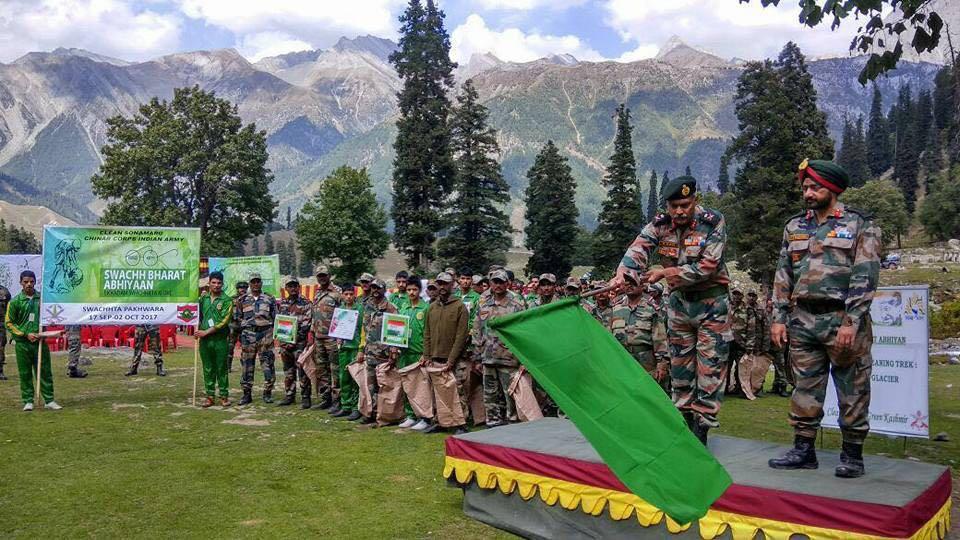 Following the photo-ops by politicians and ambassadors of Swachh Bharat, the army apparently is losing no opportunity in making most of it and appeasing the hierarchy. Perhaps next such photo-op may include a band display. But was such a nautanki necessary?

However, on a more serious note the questions are:

one, what is the involvement and responsibility of the civil administration in such mission;

two, is this a one-time requirement for the Army or continuous affair;

three, what are the stipulations / restrictions placed on the visitors / tourists dirtying the area, and;

four, are the police and central armed police forces involved in this campaign considering that their combined overall strength in the country is 1.6 million compared to army’s strength of 1.2 million.

Have these issues been considered at all? It is a different issue that the military is excelling in taking silly decisions. One example is the empty canteens most of the times, reasons explained in media reports.

A second one is the Supreme Court declining to stay the Armed Forces Tribunal (AFT) judgment granting non-functional upgradation (NFU) to members of the armed forces on the same lines as it was granted to civilian Group-A services a few years ago. While final orders are to be issued on October 26, where does this leave the military hierarchy that was party to denying NFU to military members? The stand that individuals would stop performing is stupid considering what stops reporting that the individual has reached his limit, and therefore shunt him out?

In the abovementioned article, the Finance Minister says that access to sanitation is not an infrastructure problem, there is a deeper behavioral and socio-cultural context at play, and changing behavior is a challenge. It sure is, but how have other countries managed this?

It should be clear from the examples of Japan and Singapore that cleanliness is very much the responsibility of the administration which must make participation mandatory for every citizen, foreign visitors and tourists, adequately punishing those who do not adhere to the norms and regulations.

Mere involvement of societies, nominated ambassadors and organizations like the Army amounts to shadow-boxing. The administration right from the state and districts down to the panchayat level must be made accountable in this noble national effort. Police must be visibly active to catch and punish offenders. Release of funds at large and reports of the officials must be linked to Swachh Bharat mission. There is no other way if we are really serious about Swachhabhiyan.

(Lt General P.C.Katoch is a veteran of the Special Forces)