The Importance of Shaheen Bagh

It is not for a citizen to know whether the powers in government are serious, or just preparing for elections. So while journalists might give the BJP government benefit of the doubt, the hundreds of women gathered at any given time at Shaheen Bagh know that now they are under concerted attack. After days and weeks of threat of police action, followed by a nasty campaign suggesting the women are being paid for the dharna, the BJP has dropped even by its own yardstick, to a new low.

Union Home Minister Amit Shah has set the pace, as he usually does, where he identified this one protest in Delhi amongst the 100’s across the country ---many also of a sit-in nature---to urge his constituents to vote for the BJP so that another Shaheen Bagh can ‘never’ take place. He also urged them to press the button on the electronic voting machine so hard that those sitting at Shaheen Bagh felt the current. It has been a long while since a government in power has reacted so to protests, the last sustained confrontation being the Emergency under Indira Gandhi that the BJP claims to revile.

The cue was picked up. A Minister in government shouted slogans urging the voters to “shoot the traitors’. A BJP MP contesting the Delhi elections described the peaceful protestors at Shaheen Bagh as rapists and killers who will enter ‘your homes’ if they are not removed, feeding into the ‘others’ theory. A man with a gun jumped into the protests shouting against the ‘traitors’ and threatening to get rid of them.

Clearly the protests have begun to hurt. And instead of stoking a non existent conscience, have agitated the powers sufficiently for the Home Minister to specifically target a group of women who are the only constant at Shaheen Bagh. The others come and go, in the hundreds and the thousands depending on the day and time. Used to brutal force to settle scores, that was so visible in the university campuses at the end of last year, the government knows that images of dragging women and children away will invoke further reaction. And hence the threats, and the targeting, with the man with the gun being part of tactics to scare and intimidate.

Simply because the government recognises, as do most Indians, really the importance of Shaheen Bagh. These group of peaceful women, have kindled support across India and indeed the world where the media has responded with headlines covering the protest.

One, it has broken stereotypes. Of Muslim women sitting in purdah with little else to contribute. 82 year old Saira Bano who is one of the faces of this protest is a firebrand. She minces no words in explaining why she is at the site, why she will not move, and why it is so important that her citizenship is recognised and protected. She does not abuse, she does not use nasty words, but in her “I will not go until CAA goes” she demonstrates a passion that draws admiration and trust.

Of Muslims in general. Six years of sustained abuse of being anti-national, pro-Pakistan, the Muslims have moved from the marginalised to the mainstream through these protests across India, joining all other Indians against CAA. Shouting ‘bharat mata ki jai’ yes, voluntarily without beards being pulled and guns placed on their heads and singing the national anthem India’s largest minority is on the roads in an assertion of inclusive nationalism. The slogans are the same, the songs ‘kagaz nahin dekhenge’ are the same, the artists are united, as are the people under the Constitution the Preamble of which is resonating from the streets of India.

Two, it is inclusive. And that is the reason why it has spread far and wide becoming almost a pilgrimage for Delhi-ites of all genders, castes, communities, class. Everyone mingles, no eyebrows are raised, no questions asked. Unless of course the ambience is soured by persons spewing hate or carrying guns, both of which till now have been specific exceptions to the general rule. Strangers smile at each other, artists work on the graffiti, college students perform on the makeshift stage, it is everybody’s platform.

Three, it has empowered women. There is no doubt that women are in the lead. They are sitting on dharna, they command the stage, first time youngsters address the crowds, someone sings, another recites a poem. The feeling of solidarity and empowerment is enormous, said a young woman visiting from Kerala. Women volunteers manage the crowds, and even the media to some extent. With smiles and politely telling us to wait until everyone finishes their lunch. And have CAA on their fingertips. There is a feeling of empowerment and as a scholar said, “they know women matter.”

Four, Shaheen Bagh has become central to the current resistance against the citizenship laws and rules proposed by the government. In the midst of brutality the women came out in response, and the police while wanting to was not able to clear the site. As the few remained, more joined and soon Shaheen Bagh’s started all over including in Uttar Pradesh that had seen the worst of the violence ---in Kanpur, Allahabad and now Lucknow where women are defying police threats and sitting night and day at the state capital’s ghanta ghar. 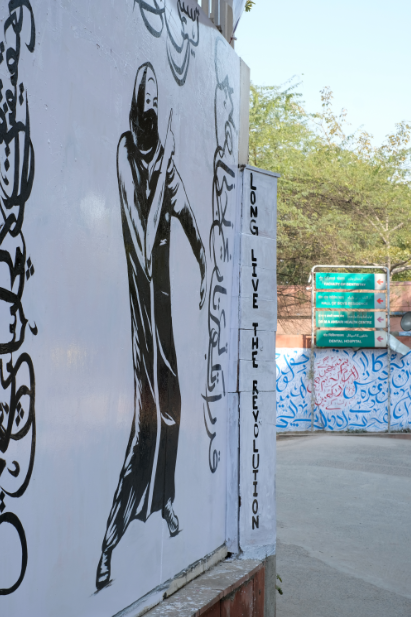