Not much is heard about what is happening in Jammu and Kashmir in these times of the pandemic. But even when the people there are seriously concerned about the spread of the coronavirus, the Hindutva rulers are busy designing what is now called the “union territory” of Jammu and Kashmir. For the people of the Kashmir valley, there is no let up in the repression and suppression of rights they have been experiencing since August, 2019.

The lockdown of J&K preceded the lockdown of India by a full eight months. That lockdown was not caused by any epidemic or health emergency. It was a political lockdown which accompanied an assault on the constitutional and democratic rights of the people of J&K which resulted in the dismantling of the state and its special status under Article 370 by the Modi government. It was marked by a total clampdown on the fundamental rights and civil liberties of citizens; detention of thousands of political leaders and activists; shutdown of the internet and muzzling of the press; and closure of schools and movement of people.

In the second lockdown which began, as in the rest of India, on March 25, the assault has been intensified. At a time when the people are battling the virus, the UT administration which is directly run by the central home ministry, is engaged in dismantling the Kashmiri identity and polity by laying the basis for demographic change. There is also the ongoing political project of reshaping the political set-up through delimitation of seats for the future truncated assembly and propping up a puppet political party.

The administration which is tackling the corona epidemic is completely insensitive to the sufferings of the people. Upto now (April 22), 407 persons have tested positive, a high proportion, in comparison with other states in terms of its population. The health system is woefully inadequate to deal with the epidemic. It is reported that there are only 97 ventilators in the Valley which has a population of 7 million.

The economic relief provided during the lockdown is also minimal, much less than other states in the country. Only free rations for BPL families and Rs 1000 from the Construction Workers Welfare Fund to the construction workers have been announced and partially implemented. There is no cash grant to the thousands of workers and artisans who lost their livelihood or any other form of income support to poor families.

The first lockdown itself had made tens of thousands jobless in the tourism and handicrafts sector. Horticulture, such as apple and saffron, had suffered severe losses due to inclement weather and lack of transportation and marketing. The second lockdown has only deepened the crisis and the losses. Yet the centrally administered authority is focused on policing the people and stamping out all signs of dissent.

In the last week, three journalists have been targeted. One of them, a woman photo-journalist, Masrat Zahra, has been booked under the draconian unlawful activities act, the UAPA, for some unspecified Facebook posts. The others have FIRs lodged against them. In Kashmir, criticising the central government attracts the terrorism charge for journalists.

This gagging of the media is taking place when a major step has been taken to facilitate demographic change in the Valley. A notification issued on April 1, has changed the nature and scope of domicile status in J&K. Earlier, only the J&K assembly could decide who could be permanent residents. That has been changed and domicile status can be given at the administrative level.

The rules have been changed so that any person who has resided for 15 years in the territory can claim domicile status. Similarly, if a central government or central PSU employee has lived there for ten years, he or she becomes eligible to be domiciled, so also their children. The notification stated that Class IV category of jobs will be reserved for domiciled persons. This meant that people from outside the territory could be recruited for the other categories.

This notification caused an upheaval and all sections of people including from Jammu opposed it. So two days later, the rules were amended so that all categories of government posts were reserved for local and domiciled people. This however did not change the definition of domicile. By this new law, people from outside J&K can get domicile status and get government jobs and buy land. This opens the way for ex-servicemen to settle down and buy land – a long sought out plan of the BJP and RSS.

It is in order to ram through such measures that the lockdown is being utilised. Of those in detention, hundreds were sent to jails outside, mainly in Uttar Pradesh and Haryana. Since the corona pandemic, there has been a public clamor for their release and return. Since last month, the process of revoking the detention orders under the Public Safety Act began and over a hundred prisoners in UP and Haryana got release orders.

However, in UP, the prisoners were told that their families should come with the release order and arrange to transport them back to Kashmir. Scores of such families have faced enormous difficulties to go by road to UP and bring back the released persons. Inter-state restrictions have to be overcome and much money spent to hire transport. It was the State which detained them and transported them to faraway jails. It should be the State’s responsibility to bring them back. Further, all those who are in detention in J&K jails have not yet been released, posing a risk to their lives with the spread of the virus.

In the meantime, there is a spurt in militant activity and attacks, something which could have been predicted given the brutal suppression of all democratic rights. The absence of any political process and democratic activities whatsoever, condemns the state to a vicious cycle of violence and counter-violence in which ordinary people are the worst sufferers. The people of Kashmir are unable to distinguish between the twin plagues that have afflicted them – the virus and the suppression of democracy.

Prakash Karat is Politburo Member of the CPI(M). 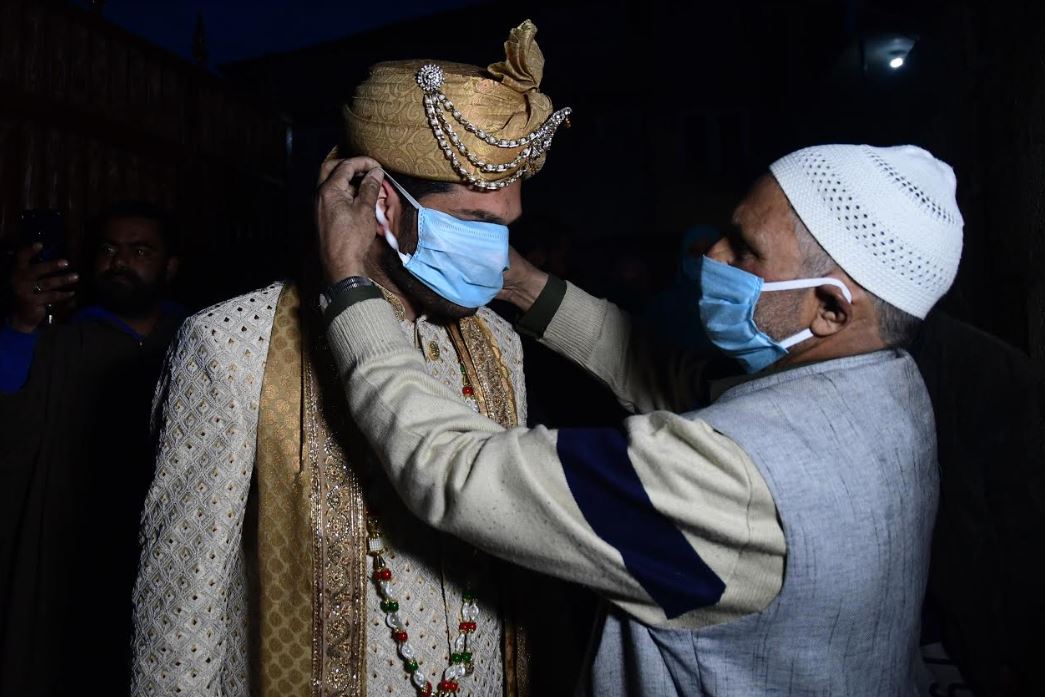 Cover Photograph BASIT ZARGAR - A marriage in Srinagar under the lockdown