Is It This or That - Citizens Scramble to De-Code Conflicting Covid Guidelines!

Long years ago when I was posted as a Deputy Commissioner in Himachal, we had a Chief Secretary who would personally pick up his phone, bark a few random orders at the DCs, and abruptly hang up even before the twits had stopped wagging their tails. For the life of us, we could never make out what his orders were because he emitted his verbal missiles at the speed of an AK-47.

We were generally left even more confused than the usual state of bafflement to be expected in a 27 year old suddenly shifted from Hindu College to a position where he presides over the fortunes of five lakh souls. It was, therefore, normal practice for us to ring up his Private Secretary and ask him to clarify for our benefit the gist of what his boss wished to convey to us. This didn't work very well, but today I yearn for those days when at least someone helped us to understand the incomprehensible.

I mention this because in these lock down days I am struck by a feeling of deja vu when I witness the scores of orders being issued spasmodically by the government. It is quite clear that either the government has no institutional memory, or has one that retains only the wrong bytes.

We all remember the halcyon days of demonetisation, when the Finance Ministry and the Reserve Bank of India issued scores of orders, counter orders, clarifications, corrigendums, erratas on a daily basis, causing so much confusion that all the black money slithered its way back into the banks before you could say " GO, URJIT, GO!"

It's all happening again, everyone is desperately seeking clarity but this time there is no obliging Private Secretary one can turn to.

Orders are issued by the bucketful, and they are "revised", "modified" or "superseded" so often that, like Raakhi Sawant, the final version has no resemblance to the original. And, as in her case too, it leaves us gasping " Yeh dil maange more!"

No one takes the original order seriously anymore: everyone waits for the inevitable "clarification", followed by many official " interpretations", and then the final press conference by a Joint Secretary where the original order is withdrawn and a new one issued, triggering the whole bewildering process de nouveau.

Prime Minister Narendra Modi announced the 3 week lock down on March 24 but said nothing about essential items, creating panic with millions converging on shops and malls: that one night probably generated more cross infection than the next two weeks.

MHA clarified the next day but the cops were having none of this for another week and beat up everyone without any bias, distinction or ill will, like a truly professional force.

Last week an order was issued that neighbourhood and stand alone shops could function. Then it was clarified that "self employed" service providers like electricians, plumbers could function. Next day a Joint Secretary further clarified at a press conference that barbers and beauticians were not covered since they provided services, not goods.

Do you notice the confusion and self contradictions in the three statements, dear reader? And we still don't know about that historical figure which is becoming a distant memory- the maid. The whole of India is awaiting her Second Coming.

Take the case of the tens of millions of migrant labour in our metros. It was initially ordered that they could not go home to their villages, notwithstanding that they no longer had jobs, food or even a roof over their heads. Then Delhi Chief Minister Arvind Kejriwal, who has almost metamorphosed into a clone of Nitish Kumar, reportedly announced that DTC buses would take them home from Anand Vihar. I don't know whether the buses materialised or not but while Kejriwal was still mumbling away UP dispatched hundreds of buses to transport those who had not already started walking to their villages.

MHA maintained a benign silence at this flouting of its directions. Then states started sending buses to pick up pilgrims, students and stranded tourists. This time Nitish Kumar maintained a sulking silence. No one was clear what the official position of MHA was, even though it pulled up Kerala and West Bengal for deviating from its orders.

Finally, on the last day of March it announced that these wretched people could be taken back by their states, and the next day even trains were allowed to ferry them. Was the mass suffering of millions in the interim period of confusion necessary?

Consider next the confusion over "zoning". What's the difference between a "hot-spot" and a "containment zone"? I live in IP Extension in East Delhi district and there is no hot spot within a radius of three kms on all sides, but I am subject to the rigours of a Red Zone. My addled brain is still trying to locate the logic of this decision: once you have already sealed off a hot spot, why impose a blanket of Red zone restrictions on the other areas in that district? Why not let life go on in the rest of the district/ city?

A cousin stays in a housing society in NOIDA which has 600 flats, a population of roughly 3000. One old lady in one flat was found to be Covid positive and the entire society/ population has been sealed off/ quarantined for 28 days( mind you, this is after they have already been through five weeks of lockdown!). I find this excessive: at most one particular floor or one tower could have been locked down and all its residents tested, rather than sealing off the entire population.

Is this a war on citizens or is this a public health issue? Who is the villain - the citizen or the virus? I do wish the government would not treat this whole affair as a military operation in an occupied territory using similes like "front-line", "covid warriors" or "the enemy". Is it trying to save us or kill us with confusion?

The states, of course, like spring, are not far behind. Take this bizarre case from Himachal ( reported in the Chandigarh Tribune of 3.5.2020) : an orchardist of repute, Vikram Rawat whose home is in Karsog, Mandi district, returned from Italy on the 6th of March 2020 and went to Pauri Garhwal, Uttarakhand, where he spent six weeks. On the 21st of April he obtained an E-Pass from the District Magistrate of Pauri to return to his home in Karsog, HP. He was allowed to enter, reached home and duly informed the SDM/ Pradhan and went into home quarantine. The administration even pasted a notice on his door to proclaim that this was a home under quarantine. But even while Mr. Rawat was admiring the new buds on his apple trees the SDM suddenly ordered him to return to Pauri Garhwal and on the 23rd he was escorted by two cops to the border and pushed into Uttarakhand ! The exile was told he had not obtained the approval of DC Mandi to return to his home and hearth. Which raises the question: are we living in one country or 32 ? Of what use is one DC's pass if the next one won't honour it? After having divided our society are we now also dividing the virus, an Uttarakhand one and a Himachal one?

I have spent long hours of intense meditation trying to figure out why we are made to suffer this confusion every four years, like a locust plague. Is it a " decision inertia" as Pavan Verma would have us believe; is it a transient phase between natural stupidity and artificial intelligence; is it that the second oldest profession in the world, like the oldest, loves to mess around? And then the whole mystery was resolved by the surfacing of the original blueprint of the plan to tackle the coronavirus and the lockdown, which forms the basis for all subsequent orders. ( I cannot vouch for its authenticity but it does appear to fit the bill!) I reproduce it below for the edification of all my readers: 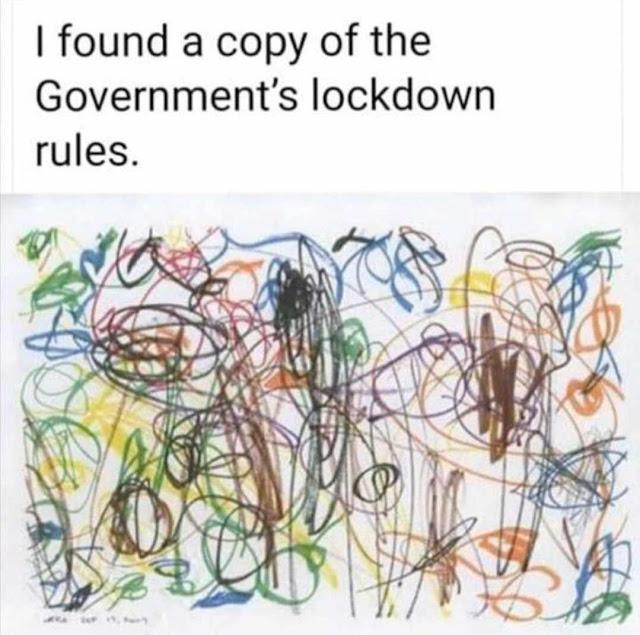 Say ( and complain) no more folks- everything should be crystal clear now.

India and Nepal In For A Prolonged Standoff? 8 hours ago

The Knives Are Being Sharpened For China