A Victory Cast in Stone

Government is on the backfoot with determined farmers, especially from the northern states, protesting peacefully against the Farm Laws. They are joined by farmers and workers countrywide. Whatever the official obfuscations, this is a People’s agitation/ protest against laws which they well understand will do them harm.

In present times, barring ritual voting in elections, the will of We the People rarely receives recognition. A people's victory is rarer still when central and state governments impose laws and projects according to a pattern of development that is being questioned.

Therefore, victories of We the People need to be recalled, so that those who struggle to assert their rights may be encouraged to soldier on. Although its scale and width does not compare with the on-going farmers’ agitations, it is good to recall a People’s victory won by peaceful means, commemorated on July 24, 2010, with a “Vijayagallu” (Victory Stone) near a village outside Mysore, Karnataka.

People from Chamalapura and surroundings, and Mysore City and surrounding towns, opposed the project. They understood that apart from displacement and land-livelihood issues of 20,000 people, other important issues were water shortage, water and air pollution, environmental destruction-degradation affecting 2-million people, and threat to wildlife. Technical and legal arguments opposing the CFTPP were also raised.

The agitations cut across socio-economic barriers and the urban-rural divide. Agitations were held independently by civil society organizations at different levels, each according to its individual style and capability. Village folk held 24x7 vigil at the project site. Police beat and arrested peaceful protestors in street demonstrations in Mysore, and charged them under criminal law.

Intellectuals and activists held lectures and seminars in Mysore, creative artists displayed documentary films, students protested. Village and city folk made common cause, holding meetings to raise public awareness about the social and environmental ill-effects of the mega power plant.

People sent petitions and postcards to all levels of government, met elected representatives, and sent delegations to Bangalore to argue with government. Petition OP No.18/2007 was filed by Mysore Grahakara Parishat (MGP) before the Karnataka Electricity Regulatory Commission (KERC), that the project was unnecessary and undesirable.

Government held that the proposed site was useless dry land, and the CFTPP would develop the area. However, CUSVHS photographs and videos of the area showed rich natural vegetation and extensive and productive agriculture, proving Government’s claim to be false.

People condemned the unfairness of “development”, that the power would benefit Bangalore, while the social and environmental ill-effects would be suffered by around 2-million people and wildlife in Nagarahole, all within a 20-km radius of the CFTPP.

Government sent no officials to meet the people. However, the petition argued before KERC by this writer (then MGP President) among others, resulted in the Chairman and a Member visiting the site on March 20, 2008, and meeting the people. Consequently, KERC issued an advisory to Government to re-consider its decision regarding the CFTPP. [“Chamalapura plant: KERC wants a re-look at project”; https://www.thehindu.com/todays-paper/tp-national/tp-karnataka/Chamalapura-plant-KERC-wants-a-re-look-at-project/article15232243.ece; The Hindu; May 31, 2008]

The victory of the People was confirmed by the Victory Stone erected next to Malleshwara temple near Chamalapura, at a simple ceremony attended by village and city folk, women, old people and students, organic farmers, intellectuals and activists, and representatives of farmers' and Dalit organizations. A student-group sang songs about nature and the environment. A 4-year-old girl, symbolising Earth belonging to the coming generation, inaugurated the stone tablet with a simple garland.

The engraving on the stone speaks of nature's bounty, its life forms, forest wealth, wildlife and the environment in the same breath as it mentions People (English translation of the full text is BELOW), significant in present times when all these are under government-corporate assault nation-wide. In a display of People's power, the stone also very simply “warns any government of the future not to undertake such destructive, anti-people projects”.

Reverting to the on-going Farm Law protests, Governments would do well to remember that they are subservient to People and not the other way, as the Mysore Victory Stone shows. 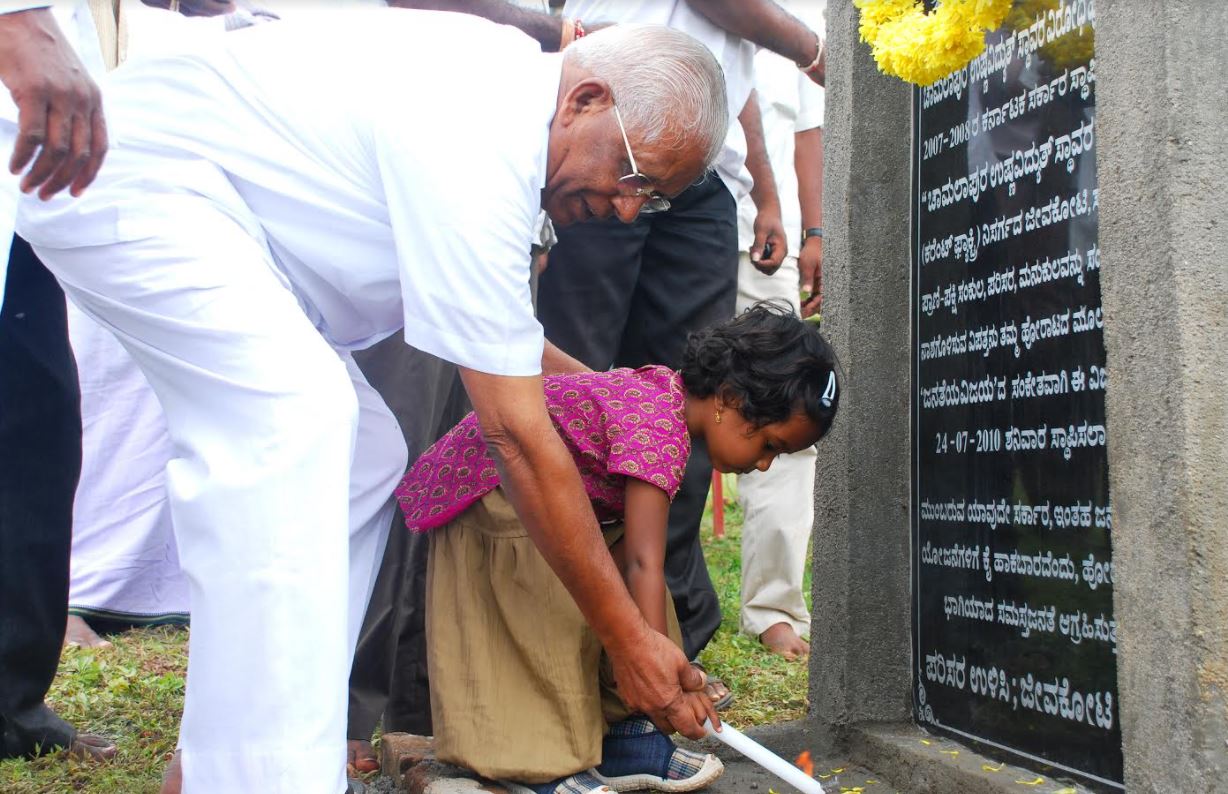 S.G.Vombatkere is a cross-discipline, systems-thinking sceptic.