Farmer Protests- 10 Reasons Why the Government Should be Worried

Normally speaking, any responsive and democratic government should be worried and concerned about all protests, be these by the few or the many. As in a democracy protests are a fundamental expression of angst arising from issues that concern the people enough for them to come out in protest. And a quick reach out would go a long way to allay misgivings, restore trust and confidence, and in the process give democracy a much needed boost. But unfortunately, over the years those who are elected to power are becoming increasingly arrogant, an A that has now been overtaken by authoritarianism that cannot tolerate protest.

However, the farmers protest now should worry even this government for reasons that have little to do with the marginalised, and more to do with the affluent beneficiaries of India’s green revolution. And roughly one can list ten reasons arising from the present stir that is set to intensify, and that should have the government rushing to repeal the three laws that are the bone of contention. The reason of democracy cited here is the 11th reason then but then once in power political parties make short shift of this.

1. The farmers are affluent sections of the agriculture communities in Punjab that has rarely joined such protests earlier, Haryana and western Uttar Pradesh. These farmers do not come out easily, but now that they have, they are not going back home without their demands met.

2. The protests are led by the old Sikh farmers, that gives a seriousness to the intent. And ensures that a strategy is followed with the enthusiasm of the youth, and the dedication of the women completing the complexion of the protest. The old Sikh farmer does not come out easily, and the fact that they have in the droves is a clear message for anyone who understands Punjab that the farmers mean business. And cannot be dealt with by intolerance and rigidity.

3. The stir has expanded to cover agrarian states, including Rajasthan and Maharashtra. The response has grown tremendously, with the small and marginal farmers joining the protests.

4. Instead of looking at the media for support, the protestors have rejected ‘biased’ coverage with the youth going to the social media for their own coverage. This rejection has eroded the media credibility in the coverage of the farmers protests, with the television channels labels of Khalistani and anti-national not sticking in the peoples perception. The social media has become the primary source of news for the farmers agitation.

5. There is tremendous unity between all the farmers groups and organisations. They all are aware of attempts to break this, but this awareness has made them resist the efforts till date. There is continuing amity on the repeal of the three laws, with government offers being rejected in toto. Farmer leaders are aware that a break in unity would lead to repressive action against select leaders and groups.

6. The protests are peaceful and disciplined. Farmer after farmer, young or old, is clear that the protests will remain so and everyone has been warned against this. Interestingly, lessons have been learnt from the CAA protests with the Sikh farmers having their own battery of Nihangs who claim to be with them for their protection. And to prevent gunmen from trying to disrupt the protests.

7. There is widespread communication within to prevent people from falling prey to rumours. In fact rumours are scotched before they even begin with the farmers clear that they will not allow any disruptive elements to foment violence, of the north- east Delhi kind that was used against the anti-CAA protestors by the state. As such rumours and fake news are being fought by high levels of information, dispersed through an active grapevine that is now stretching across the borders, making it difficult for rumours to create confusion and fear.

8. The farmers are being joined by workers, and till date despite the blockades and traffic difficulties they have the support of the people. The stir is expanding to others across and the longer it stays the more support it is generating, rather than the other way around. This is because the kisan has huge support amongst the working classes and the people in general.

9. The farmers of Punjab and Haryana are closely connected with the Army, with the ‘jai jawan, jai kisan’ slogan reverberating even across these protests. Every other family has a son in the army, and another in the field giving teeth to this slogan in real terms.

10. The farmers have made it clear they are here for the long haul and have come with rations to last them six months in the first go. Their women are tilling the field, others are moving back and forth in rotation, with the numbers increasing for every planned day of protest. They are aware, interestingly, of a possible crackdown and seem to be well informed and well prepared to resist all action with, as they keep reiterating, “non violence.” 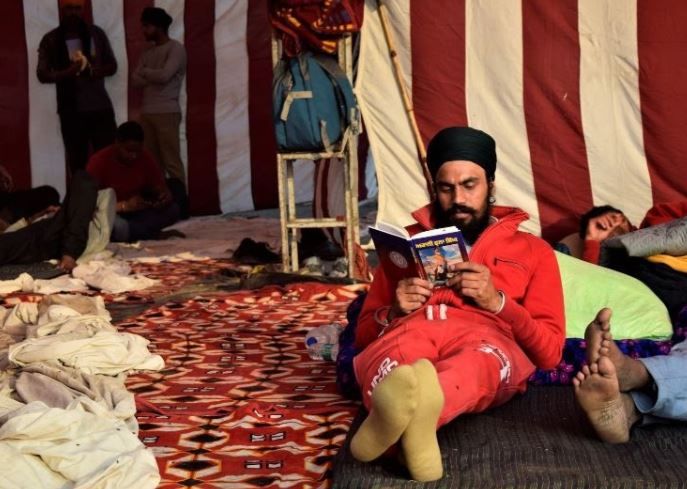 Cover Photograph Mohit Dock & Aquilur Rahman -Taking time off to read a book on Bhagat Singh inside a makeshift library at the Singhu border.