The over a month long agitation by the farmers of the nation against the three Agricultural Acts passed by the government in the midst of the raging Corona Pandemic, without consultations with the opposition or the farmer groups across the country shows no sign of petering out. It actually is becoming larger by the day, despite the government using all legitimate and at times illegitimate ploys it has in its substantial armoury.

When the agitation started a month back, my initial thought went to the age-old proverb: “Jiski Lathi Uski Bhains” (literally he who has the stick gets to own the buffalo). As time has passed, I see the Laathi shifting between the people’s power and the Sarkar. For the uninitiated, let me explain how the Laathi has an importance of its own in our country and has been wielded by both individuals and the Sarkar, with the results changing in accordance with how the Laathi is used.

While the original proverb had a rural connotation, it has over time picked up new meanings. This proverb is used when a person/entity oppresses someone and gets unlawfully something which he is not entitled to; while the society, judiciary, and other authorities of the state fail to help him.

This is also called the law of the Jungle. The foundations of modern society, if laid on this law, will destroy the society. Historically, it always has had a sad end, whereas civil behaviour, consensus and peace with justice will ensure the longevity of societies.

In the present standoff, the meaning of this proverb is that whoever has the power, or the means of controlling others (represented by the laathi) is the one who gets to rule those people that he/she is controlling (represented by the buffalo).This is often used to show that life is not fair, that just because you own the buffalo, doesn't mean you really do, as whoever has the stick will snatch the buffalo from you.

The biggest purveyor of such power is the government, as it has the wherewithal of wielding the Laathi which encompasses varied powers but its visible manifestation is mostly by using the police forces at its disposal, whose favourite weapon is not the rifle but the Laathi, along with sundry weapons like tear gas, water cannons, rubber bullets and even huge concrete boulders that were seen in the early stages of this agitation, but were thrown asunder by the determination, ‘juggads’ and the innovative minds of the farmers.

During colonial times, the Laathi was much in evidence as the populace was subdued by force. In Independent India, as the country embraced democracy and as institutions took hold in the nation, the wielding of the Laathi by and on behalf of the government reduced, but after the present government started veering towards majoritarian dispensation, the Laathi regained its earlier premier position.

It continues to rule the roost and by far is the weapon of choice of our political leadership who tightly control the police forces. Lately, its use has increased as the police take its cues from the government, which currently is one that wields power by authoritarianism and majoritarianism couched in sweet words! The ’Sarkar’ actually lords over the populace and uses the police as the instrument of choice to keep the citizens on the straight and narrow path!

Unlike many other agitations against government laws and high-handed actions against a variety of people, situations and views, which were handled with some finesse, cajoling, monetary and other offers, pushing an alternative narrative using its army of foot soldiers and their Siphasalars (big and small leaders), announcing incorrect data and using practically every other trick in its ‘dirty tricks department’, it has not been able to make a dent in the resolve of the farmers, who are braving the extreme cold of the north Indian winter, away from their hearths and homes.

The government, with its near total control of the media, as well as government and Party coffers has not been able to sell its false narrative that only farmers of Punjab and some from Haryana are agitating, whereas this is the mother of all agitations, not seen for a long time.

So, why is the government so adamant in pushing the three Agricultural Acts, when there is overwhelming support for the farmers cutting across the entire country? Arrogance of power, inflated egos, pressure from the corporates who have not only contributed to Party coffers and are now demanding their pound (in this case tons not mere pounds) of flesh, are some reasons.

In the long term, the ruling party feels that repealing the three Acts will adversely affect their electoral prospects, which has been and is the number one aim of the ruling party and their ideologues! Add to this the waning influence of Prime Minister Narendra Modi, who has swayed many opponents with his rhetoric and emotional appeals. But when it comes to the vision/thinking of the farmers who see a ruinous life ahead for themselves and their progeny, appeals, whether emotional, practical or realistic do not work.

In the ultimate analysis, the confrontation is a case of wielding power, between the government with all its instruments and resources against people’s power, which can be seen from the day the agitation commenced.

Despite the state governments where the central party is also in power using the ‘laathi’ and other paraphernalia that our police forces use with gay abandon, when asked by their political leaders, the farmers overcame all obstacles peacefully. They have also broken the myth of farmers and others from rural areas being yokels, one has to commend them for the huge logistics they have made for a prolonged stay; the remarkable ‘Kar Sewa’ that only Sikhs have done so successfully; systematic method for replacing farmers on the frontline; keeping the home fires burning; using electronic gadgets to great advantage; even launching a newspaper; and ensuring that old farmers, women and children get all the facilities against both the climate and the minimum temporary habitats. They have also managed to ensure that no violence takes place, to give another handle to the government.

I have no intention of repeating the various arguments put forward by both sides, as these have been aired ad nauseum and everyone knows about the pros and cons of both, but let me suggest a way out from the present impasse, wherein both sides are not budging from their stated positions. The government has stated many times that the Acts will not be repealed, while some changes/modifications are possible. On the other hand, the farmers have held onto their demand that the Acts must be repealed.

Despite the length of this article increasing some more, let me cite an instance, wherein a similar situation was described in earthy language in a Track II diplomatic effort in 2003. I had accompanied an All Party Parliamentary Delegation to Pakistan, with big and small honchos of all political parties of India, with a similar set-up by the Pakistani side. The event was organised by South Asian Media, who again were represented by big wigs of the media. My presence was incidental, as two retired army officers and two retired diplomats were added to the delegation as ‘experts’. In the event, we ‘experts’ were mostly on listening watch!

During the formal confabulations at Islamabad, with delegates from both sides facing each other, each delegate was given a few minutes to convey his points. When it was the turn of the irreplaceable Lalu Prasad Yadav, he stated in chaste Hindustani that both sides had dug a ‘khuta’ (peg for tying cattle) in each other’s space to tie their buffaloes and were loath to give way, so the impasse continued!

I see that in the present case too, both the government and the farmers have dug their ‘khutas’ and are loath to dilute their positions. God forbid, if we continue in this vein, we may have this Capital Standoff continue indefinitely, like India-Pakistan relations.

My suggestion to resolve this impasse is for the government to temporarily stay the implementation of the three Acts for say six months, set up a Parliamentary Review Committee for the Acts, but with representatives of farmers participating as equal members and modify/amend/change the Acts in accordance with the recommendations of the Parliamentary Review.

I believe that this would ease if not end the farmers' agitation; no side will ‘lose face’- an important consideration; and end the present standoff.

It is important for both the government and the farmers to back-off for the good of the nation and for the continuing prosperity of our farmers and others of our rural areas, who will prosper and not fall prey to the greed of the corporates, who are a major reason for the enactment of these three Acts, besides other reasons that need not be stated here. 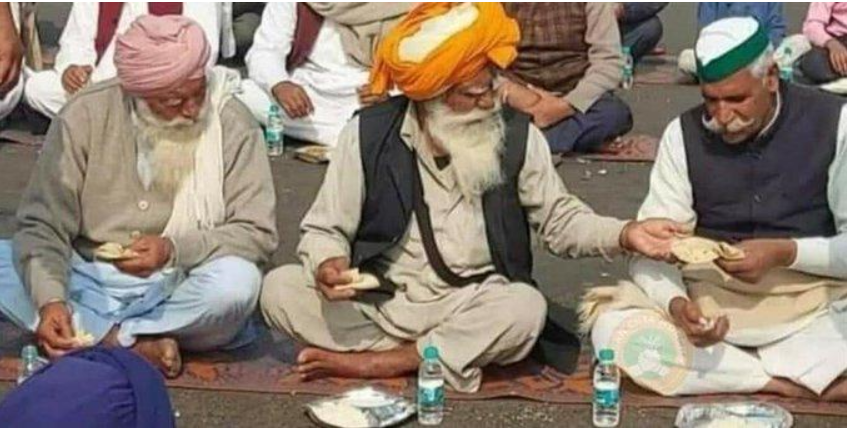