As Nepal’s foreign minister Pradeep Gyawali arrived in New Delhi on January 14 for the Sixth Joint Commission Meeting (JCM) on January 15, India put out a clear message saying there is a separate mechanism to address the Kalapani issue raised by Nepal, ruling out any substantive dialogue for this during the JCM.

Kathmandu recently witnessed demonstrations demanding return of monarchy in Nepal but this is unlikely. Besides, Beijing wields enough heft to have King Gyanendra assassinated since he lives in Nepal as a private citizen without state protection. Opinions that Prime Minister KP Sharma Oli dissolved the lower house of Parliament on India’s behest after meeting the Director R&AW appear absurd – why would Oli groomed and installed by China listen to India?

Nepal plunged into a political crisis on December 20 last year after Oli recommended dissolution of Parliament to the President. Oli was under pressure to withdraw an ordinance related to the Constitutional Council Act increasing his own powers.

But another reason was that Oli refused to honour an earlier agreement to split his term as prime minister with the co-leader of the governing Nepal Communist Party (NCP) – Pushpa Kemal Dahal aka Prachanda.

The President’s office announced mid-term polls in two phases during 2021 - April 30 and May 10. This sparked protests from a large section of the NCP led by Prachanda. Nepal’s next general elections were due in 2022. Seven ministers in Oli’s cabinet resigned and Oli reshuffled his cabinet. Nepal’s Supreme Court issued show-cause notice to the Oli government over dissolving the Parliament abruptly.

China responded by sending an official delegation headed by Guo Yezhou, Vice Minister of the CCP to Kathmandu on December 27 to resolve the feud within the NCP ensuring communists remain in power for serving Beijing’s interests. Guo has been in touch with almost all senior NCP leaders since long. After the KP Sharma Oli-led CPN-UML and Prachanda-led NCP (Maoist Centre) emerged victorious in the 2017 general elections, Guo visited Kathmandu in February 2018 to oversee merger of both communist parties into the NCP.

Hou Yanqi, Chinese ambassador to Nepal, who was in news in recent months for influencing the Oli administration to get tough with India, apparently messaged Beijing that she couldn’t convince Oli to rescind his recommendations to the President for dissolving Parliament.

Huo Yanqi has been in the news in recent months for openly modeling Nepal’s politics to further Chinese interests. In September 2019, the Oli government organized a symposium inviting CCP members to Kathmandu for training Nepali leaders on Xi Jinping’s ideas of administering the nation.

In May 2020, Yanqi held separate meetings with the President, Prime Minister and other senior NCP leaders including Prachanda. In July 2020 she again met the President, the Prime Minister, former prime ministers Prachanda, Madhav Kumar Nepal plus Jhala Nath Khanal and Bamdev Gautam for the same reason.

This was clear interference in Nepal's internal affairs as criticized in some political circles and other forums of Nepal. Dozens of student activists and youth protested outside the Chinese embassy in Kathmandu shouting slogans carrying anti-China placards. However, this time Huo’s charm failed to work and hence the SOS to Guo.

It was too much for Guo to expect Oli to withdraw his decision which would be a big comedown for him not only within the NCP but also within the CPN-UML. But to think that Oli was not in touch with Beijing before Guo’s visit would be naïve. In fact, Xi Jinping and the CCP have been in constant touch with the President, Oli and other political leaders of Nepal.

One view is that Oli dissolved Parliament on Beijing’s advice giving four months to the CCP for keeping the NCP together before mid-term polls. Mao Zhedong had called Tibet the “palm of China” which China invaded and has been in illegal occupation since the early 1950s. Mao also called Ladakh, Nepal, Sikkim, Bhutan and NEFA (Arunachal Pradesh) “fingers” of Tibet, which he wanted China to annex. That is why Mao’s regime initiated the Maoists insurgency in Nepal and ultimately installed the communist rule in Kathmandu.

China would want to keep the NCP together – but how, considering what has already happened? Can Beijing dump Oli who has been a die-hard Beijing loyalist, taking up cudgels against India simultaneous to China’s 2020 aggression in Ladakh, publishing a new Nepalese map that includes three Indian territories, deploying the Army for the first time on the border with India, and even denying that China has illegally occupied Nepalese territory in Humla. This despite Nepal's Survey Department of Agriculture Ministry report that China has cumulatively encroached 33 hectares of Nepalese land in 10 places and has been diverting rivers to increase its territory.

If the next government in Nepal is coalition of CPN-UML or NCP (Maoist Centre) with Nepali Congress, can the other communist faction still agree to issue-based support from outside, and in such contingency how can the coalition government be overturned to reinstate a wholly communist regime. With both Oli and Prachanda having been leaders during the Maoist insurgency China would naturally work on multiple fronts simultaneously.

China’s state-sponsored media has brushed aside allegations of Guo’s delegation interfering in Nepal’s internal matters saying it is because of Chinese investments in Nepal – some justification!

In simple terms it means that a money-lender can get inside your house, tell your family to behave and appoint anyone to head the affairs and be the boss? This amounts to a slap on any democratic country.

China can do all the “lending” it wants but shouldn’t it let the Nepalese public decide who should govern Nepal?

There is little doubt Guo’s delegation was an attack on the pride of Nepal. The Nepalese public recognizes it very well. The question is do the communist leaders of Nepal recognize it as such because if they do not they are less Nepalese and more Chinese surrogates. 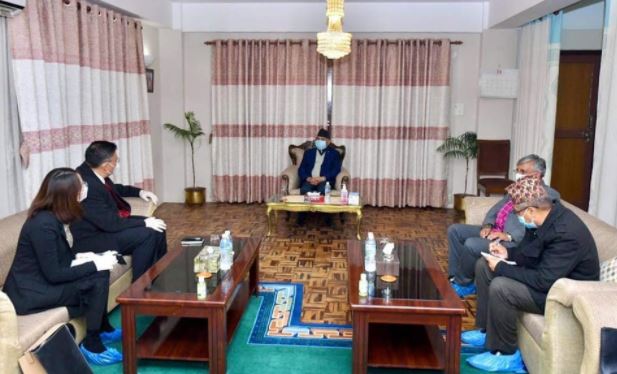