Biggest movement in the world

Early last week, the highest court of the nation, the Supreme Court (SC), had chosen to involve itself in trying to end the stalemate between the government and the farmers who had been agitating since the last week of November 2020, in an agitation that has become the biggest such agitation, not only of the country but also of the world. A prominent newspaper has even called it a revolution!

In a country that is used to all kinds of groups agitating to get the attention of the government for their problems and grievances, this agitation is unique in many ways. Prominent ones are its peaceful nature, with no laws broken; the firm stance of the farmers; their tenacity; and the participation of women and children of all ages joining in enthusiastically with the men folk.

The farmers from all over the country have gathered on all sides of the Capital, New Delhi, to prevail on the Central Government to repeal three Agri-laws passed a few months back, as they are convinced that these Acts are ruinous for the farmers. On the other hand, the government’s stand is that the three laws are reforms meant to modernise and corporatize farming and will be beneficial for the farmers.

The farmers, offering cogent arguments are vehemently saying that these Acts will destroy the farmer’s livelihood, their way of life and eventually their lands and are thus anti-farmer and pro corporates. They especially point out that the very large number of small farmers; the landless labourers; and others who work in connected fields on low wages; and even the middle-men will be economically greatly stressed, if not ruined; and they are fighting for their children’s future.

The government has tried to placate the ire of the farmers by all instruments and responses it could muster, from use of force initially to stop them from reaching the outskirts of the Capital; to platitudes by ministers and even by the highly articulate Prime Minister; organising meetings; trying to inject false political motivations; policy of divide and rule; throwing up alternate narratives; mobilising its party foot soldiers and those of its ideologues to counter the agitation by the usual policies of ‘carrots and sticks’; as well as other methods that do not really suit the biggest democracy of the world, like harassment by government’s instruments like the police, CBI, income tax department, NIA and even raids.

Unfortunately, the central government has not been able to convince the bulk of the farmers of the country, although rich farmers with large holdings generally agree with the government.

Having failed to persuade the farmers, the government in its eighth meeting, unequivocally had stated that these Acts would not be repealed, but negotiations would go on for making changes! It was more than obvious that the government had reached an impasse and hence was looking for someone to intervene. It seems to this writer that the government’s gaze fell on the Supreme Court (SC), which in the last six years or so, had shown a penchant for mostly agreeing to the government’s point of view!

The first SC hearing on January 11 was more for clearing the pending petitions relating to the agitation that were piling up and not a suo moto note of the Kissan Aandolan. The reason was that the agitation was a case of difference of opinion between the government and the farmers and hence was not a case needing a legal order from the SC. However, the battery of lawyers fielded by the government, comprising all legal heavy weights (the big guns or ‘topkhana’ in army parlance), soon veered the focus towards legal issues.

In its wisdom, the Bench headed by the Chief Justice himself passed an interim order, which chided the government for the fruitless negotiations with the farmers and asked the central government to ‘stay’ the implementation of the three Acts. This order was applauded by everyone, except the government perhaps!

However, the euphoria was short lived, as the very next morning, not waiting for the reply of the farmers or the government, the SC ‘stayed’ the implementation of the three Acts and announced the formation of a committee under its aegis. Unfortunately, the selection of the members of the committee seemed to have been done hurriedly, which was criticised widely, on account of the earlier public pronouncements of the members that were highly pro-government and pro-Acts.

Milord’s, I wish you had stopped after ‘staying’ the Acts, as the Bench had already taken cognisance of the surreptitious manner in which the Acts had been passed - without any discussion in Parliament or outside, in the middle of a raging pandemic! However, by forming a committee, the SC willy nilly and needlessly became a party to the tussle between the farmers and the central government.

We now have the piquant situation where one member of the committee nominated by the SC has recused himself even before it meets; another has publicly stated that he may also follow suit; the farmers have categorically stated that they have no intention of appearing before this or any other committee; and the government has set yet another date to carry on with the fruitless negotiations!

This brings me to a military analogy that may offer a better understanding of what has transpired in the last few days.

In the armed forces, when an operational plan has to be made, commanders do so by carrying out what is known as ‘Appreciating the Situation’. This is a methodical way of formulating a plan, keeping various aspects of the situation and all relevant factors that may impinge on it in mind. These include aim, terrain; quantum of opposing forces; time and space considerations; effects of weather/climate; leadership and morale; options available; and so on. The result is a plan of action.

The importance the military attaches to this methodology can be judged by the fact that one separate test paper for the Defence Services Staff College Entrance Examination, out of five/six is only for formulating an ‘Appreciation of the Situation’! However, many budding ‘Shivaji’s’ and ‘Rommels’ have met their waterloo and a bright future because they could not grasp the intricacies of ‘Appreciating the Situation’ and ended up by what is known as ‘Situating the Appreciation’. Simply stated, the latter consists of first making a plan and then building up arguments and analyses to support it. Needless to say that they usually end up with an unworkable plan!

Milords over a period of two days on January 11 and 12, it appears to me that some kind of ‘Situating the Appreciation’ has occurred in this case. Maybe the government lawyers had argued the case too boisterously, both in and out of court; or the desire for an early finalising of this long-standing stand-off with its various ramifications hastened the process; or the government forced the issue!

Unfortunately, the result is a mismatch of two committees, continuation of the stalemate and no light at the end of the proverbial tunnel! That the leaders of the Aandolan have rejected both the committees adds to the complexities!

Even to a novice like me, who was and continues to be apolitical, but is aware of the issues involved in the current farmer’s agitation, it seems to be a clear case of ‘situating the appreciation’, possibly on behalf of or at the behest of the Sarkar! This happened despite the agitating farmers conveying to the Honourable Court, as early as the previous night, that they would not appear, let alone discuss anything with this or any other committee. The reason was that both the Sarkar as well as the Farmers spokespersons had taken firm stands.

I am still of the view that the only way out of the impasse is for the central government withdrawing the Acts for the present; constituting a Parliamentary Committee, which must include representatives of the farmers as well as States (after all farming is a state subject mentioned in List II (State List) of the Constitution of India, although Central Government has enacted the three contentious farm laws under the provisions related to agriculture marketing mentioned in List III (Concurrent List)).

The Committee should be time-bound for submitting its recommendations. I had suggested a similar approach in an earlier article on this subject in this very e-newspaper that can be accessed at The-Capital-Standoff---Jiski-Lathi-Uski-Bhains.

Milords, in the final analysis, should one not say that you may have erred, meeting neither the aspirations of the bulk of the farmers of our country nor offered any guidance for the standoff to be resolved! 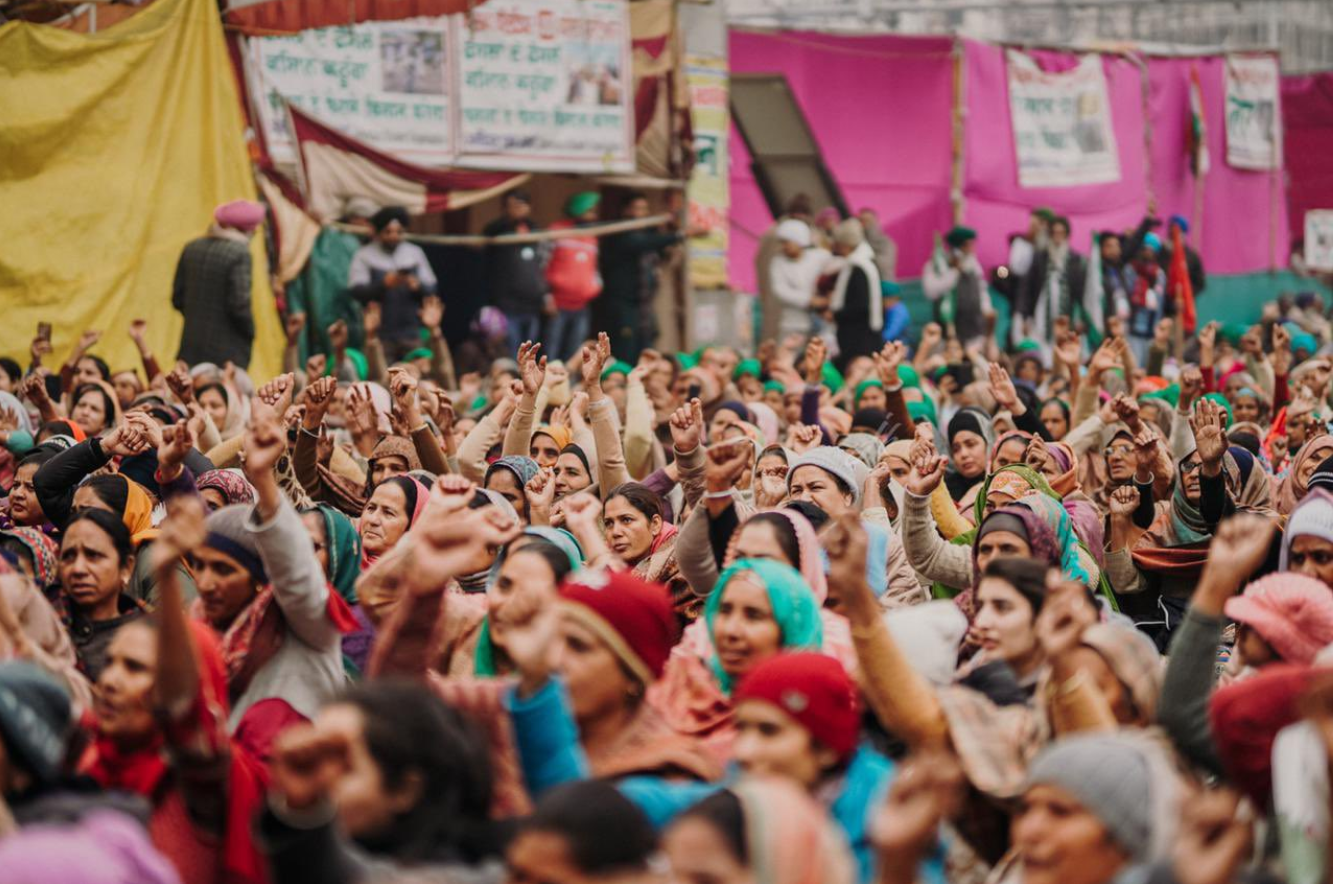